United Methodists should focus on dismantling racism in the church as a step toward doing so in the entire world, said a bishop who is involved in a major new antiracism initiative by the church.

“We do live in hope,” said Bishop Cynthia Moore-Koikoi of the Western Pennsylvania Conference. “We do believe that there will be a day when we will dismantle racism.”

The Social Principles of The United Methodist Church recognize racism as a sin and commit to challenging unjust systems of power and access.

Bishop Cynthia Moore-Koikoi sings with members of the Anointed Voices choir at Ben Hill United Methodist Church in Atlanta where members of Black Methodists for Church Renewal worshipped during their 2019 meeting. Moore-Koikoi is part of a churchwide campaign to dismantle racism. File photo by Mike DuBose, UM News.

The new program, “Dismantling Racism: Pressing on to Freedom,” launches this month. It is a multi-agency effort that includes participation from the Commission on Religion and Race, the Council of Bishops, United Methodist Women, Discipleship Ministries, the Board of Church and Society and United Methodist Communications. Other agencies and many annual conferences are contributing to the effort.

The campaign begins June 19, to coincide with Juneteenth, the commemoration of the end of slavery in the U.S. An announcement from members of the United Methodist Council of Bishops will be broadcast that day at 11 a.m. Central time on UMC.org/EndRacism and Facebook.

Louisiana Area Bishop Cynthia Fierro Harvey, president of the Council of Bishops and the first Hispanic woman to hold that post, will participate in that event with Moore-Koikoi and other bishops.

The campaign will include local and national worship services, town hall meetings, online courses and other resources. A national advertising campaign on social media and news websites across the U.S. directs viewers to the UMC.org/EndRacism website for information and resources. The campaign, launched by United Methodist Communications, includes digital billboards in Atlanta, Minneapolis, Houston and Louisville.

Advocacy and worship resources will seek to equip leaders, members and the public to be a part of the campaign. Materials will be available in English, Korean, Spanish, French and Portuguese translations. 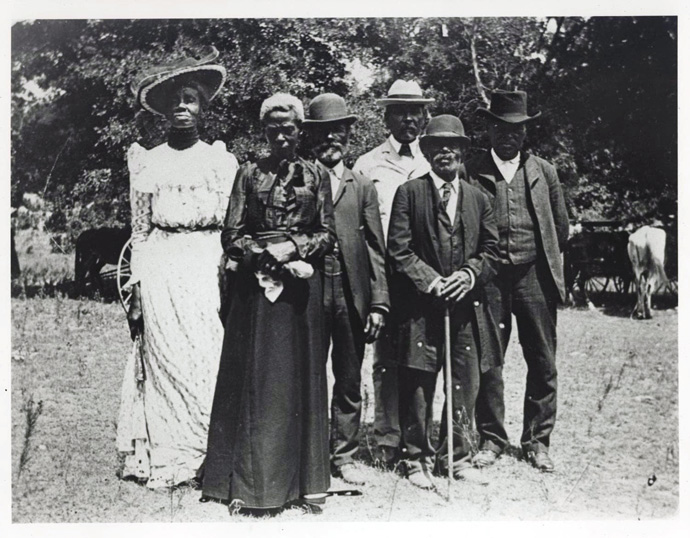 Historic image of a Juneteenth Emancipation Day Celebration, June 19, 1900, Texas, from The Portal to Texas History Austin History Center, Austin Public Library. Although the Emancipation Proclamation was issued more than two years prior, the holiday celebrates the reading of federal orders on June 19, 1865 in Galveston, Texas, one of the remote areas of slavery where enforcement had been slow and inconsistent. Photo by Mrs. Charles Stephenson (Grace Murray), courtesy of Wikimedia Commons.

The Council of Bishops is asking United Methodists to read about antiracism and speak with children, youth and adults about the subject. They also request that United Methodists join in prayer for at least 30 days at 8:46 a.m. and 8:46 p.m. for 8:46 minutes, the length of time a Minneapolis police officer held his knee on the neck of George Floyd, killing the 46-year-old African American.

The deaths of African Americans in police custody have sparked protests all over the U.S. and beyond, with some escalating to looting and riots. Floyd’s death on May 25 has in particular aroused dissent. 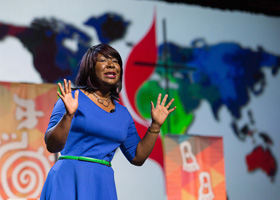 Erin Hawkins, top executive of the United Methodist Commission on Religion and Race, speaks on May 10, 2016, to the United Methodist General Conference in Portland, Ore. Hawkins was discussing intercultural competency. The commission is part of a campaign to dismantle racism. File photo by Mike DuBose, UM News.

“When I first saw the video, a knot in the pit of my stomach, a feeling of dread came over me,” said Erin M. Hawkins, top executive of the Commission on Religion and Race. “It was just another link in a chain of violence against black people, and particularly black men. … The thing that that came to my mind was, ‘Oh no, not again.’”

Many people are upset at the abuses black people suffer but don’t know what to do about it, Moore-Koikoi said.

“Something stirs up in their spirit, but then they’re not sure what to do,” she said. “We’re going to provide folks with resources on an ongoing basis — not just a one-time worship of repentance so we feel good about ourselves.”

The participation of white people in some of the recent rallies and protests may present an opportunity for educational campaigns to be heard better this time, Hawkins said.

“I think that certainly there is a listening that is happening,” Hawkins said. “There is a leaning in to say, ‘We need to learn more … in a way that is broader and deeper than it has been in the past.’”

A virtual denominational town hall on July 1 might provide a space “where white folks can listen,” said Moore-Koikoi. More details about this event, including how to tune in, will be forthcoming.

“All we can do is offer it, provide the structure and platform and hope they will avail themselves,” she said. “Some people say they don’t have an opportunity to interact with people of color, especially black men. So this is one thing you can do. You can listen.”

The United Methodist Church has created an advertising campaign, #EndRacism, in an effort to actively engage in the ministry of dismantling racism and promoting racial justice. Logo courtesy of resourceumc.org.

A day of prayer and worship will take place on June 24, with an online denominational worship service to be broadcast at noon Central time on UMC.org/EndRacism and Facebook. It is billed as “Dismantling Racism: A Service of Lament.”

“We know this (service) isn’t going to provide freedom, but it’s the signal that we in The United Methodist Church are going to be pressing on towards that,” Moore-Koikoi said.

“There will be an invitation to United Methodists that are outside of the United States,” Hawkins said. “They should be looking at their own expressions of colonialism, tribalism, white supremacy, colorism and the parallels to racism.

“So they’ll be doing some work in town hall meetings and worship about discrimination in those cultures as well.”

“We are headed to Minneapolis as a denomination back to this place where the spark has been lit,” Hawkins said. “We have United Methodists whose hearts and minds and actions and words have been transformed because we’ve been intentionally addressing within ourselves, our churches and our communities of the sin of racism.

“It’s a journey to transformation, so when we go back to this place that is an inflection point that happened, we are a more faithful church, and we can be at the site of that pain and be a credible witness to the world.”

Asian and Pacific Islanders in the United States have continued to face racism from governmental actions and white supremacy since at least the middle of the 19th century. United Methodists are called in baptism to resist these and all forms of evil, injustice, and oppression.
Faith Stories