Two bishops propose turning The United Methodist Church into an umbrella organization for new, self-governing church groups that would offer different approaches on ordination of gay clergy and same-sex unions. 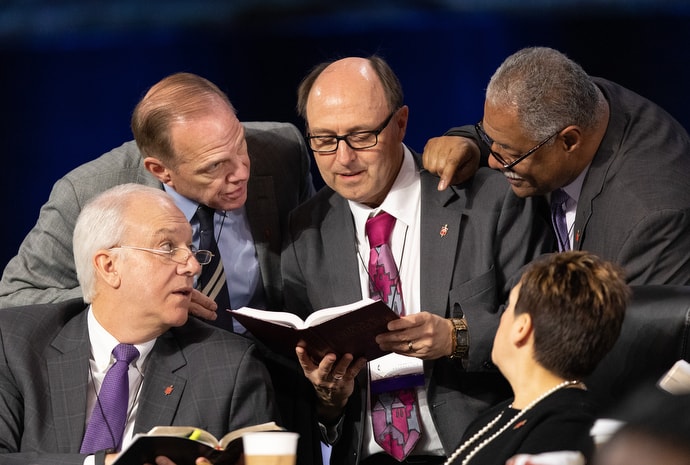 Bishop David Bard (center) confers with fellow bishops on the issue of whether the legislative committee can refer items to the denomination's Judicial Council for review during the 2019 United Methodist General Conference in St. Louis. Bard has since joined with Bishop Scott Jones in proposing a plan to reshape The United Methodist Church. File photo by Mike DuBose, UM News.

“We both envision a future where the church will focus on its mission of making disciples and spend less time and energy debating issues of human sexuality, which means we need to bless different parts of The United Methodist Church to be about the mission in their own ways,” Jones said.

The denomination has faced conflict for more than four decades over theological differences regarding homosexuality. The 2019 General Conference, held Feb. 23-26 in St. Louis, reinforced restrictions on LGBTQ ordination and same-sex unions, but also led to protests and resistance by many churches across the U.S.

Bard and Jones’ plan comes as various groups of church leaders discuss options for the denomination, including schism. A Sept. 18 deadline looms for petitions to be submitted for the 2020 General Conference in Minneapolis.

Though bishops don’t vote at General Conference, Bard and Jones said they feel an urgency to stimulate debate and action.

“We’re offering this plan as a thought experiment that we hope others will take seriously and consider as they are making decisions about the future of the church,” Jones said.

Bard added, “Scott and I acknowledge that there’s room for other ideas to be incorporated.”

Under the Bard-Jones plan – titled “A New Form of Unity: A Way Forward Strategy 2019-2022" – an annual conference would choose to join one of three groups the bishops are tentatively calling the Traditional Methodist Church, the Open Methodist Church and the Progressive Methodist Church.

The Traditional Methodist Church would begin with a Book of Discipline that includes the Traditional Plan, which passed by a vote of 438 to 384 at the 2019 General Conference and strengthened enforcement of restrictions on LGBTQ ordination and same-sex unions.

The Open Methodist Church and Progressive Methodist Church would begin with a Book of Discipline modified to include the Simple Plan as presented in St. Louis. That plan called for eliminating restrictions on same-sex unions and ordination of gay persons as clergy, as well as removing the church’s official position that homosexuality is “incompatible with Christian teaching.”

Under the Bard-Jones proposal, the Progressive Methodist Church’s Book of Discipline would be further modified to affirm clearly the full inclusion of LGBTQ persons in marriage and ordination candidacy. 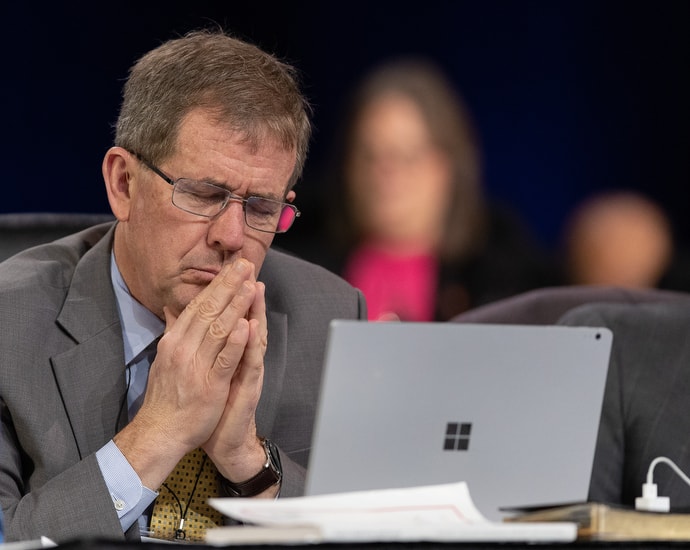 The two or three churches would each decide on a name (“Methodist” isn’t required to be part of it), and each would hold its own General Conferences, with complete freedom to revise its Book of Discipline. Each would fund its bishops and decide on approved seminaries.

The two or three churches would share in governing the General Council of Finance and Administration, Wespath, the United Methodist Publishing House and the General Commission on Archives and History. They would contribute proportionally to the Black College Fund and Africa University.

Other general church agencies would have their own boards and be accountable to the Open Methodist Church but would provide services as requested to the other churches.

The United Methodist Church would no longer have individual members but would continue to exist “as an umbrella to facilitate this new form of unity,” the plan says.

The churches would be in full communion, and each could use the cross-and-flame logo of The United Methodist Church.

Though specific in many ways, the plan leaves unanswered big questions, such as the global nature of The United Methodist Church.

‘A New Form of Unity’

Bishop David Bard and Bishop Scott Jones have offered a plan that would dramatically reshape The United Methodist Church. Read the full plan.

Asked about the ambiguity, Bard said, “While we’ve had conversations with our colleagues from other parts of the world, we didn’t want to go too far in defining what they may wish to do.”

Another unknown: Would these new churches have a Judicial Council?

“Each of the new church groupings would determine whether or not to form a Judicial Council or similar body,” Bard said.

The Connectional Conference Plan that failed at the 2019 General Conference would have realigned the denomination according to perspectives on LGBTQ inclusion, as does Bard-Jones.

But the Connectional Conference Plan required constitutional amendments, a lengthy process involving votes throughout the annual conferences. Bard and Jones believe their plan could be launched by General Conference action only.

“The key is the proposal to allow U.S. annual conferences to leave the denomination,” they say in the plan. “It was contained in section 9 of petition 90041 of the Traditional Plan. This section of the petition was ruled constitutional by the Judicial Council. Because the petition died in the Standing Committee on Central Conference Matters, section 9 would need to be reintroduced and passed in 2020.”

The Bard-Jones plan foresees churches that disagree with their annual conference’s affiliation decision having the right “to transfer conferences with their assets, thereby joining a different church.”

Bard and Jones have known each other since long before they were episcopal colleagues, having crossed paths at Southern Methodist University, where they both earned Ph.Ds.

They said they have shared their plan with fellow bishops as well as with groups discussing the future of the church. The stakes are high, and the two bishops hope to have an influence.

“Our plan offers a vision for keeping as much unity as possible and a pathway for decisions to be made,” Jones said.

The drafters of the Christmas Covenant are leading webinars in the Philippines, Africa and Europe about their proposal for changing the denomination’s global structure.
Judicial Council

Too often, important decisions at the church’s highest levels are being made in closed sessions that violate church rules about transparency, says one General Conference delegate.