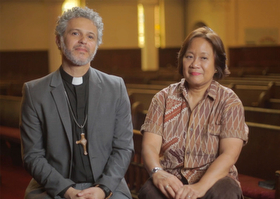 The Simple Plan, offered by the caucus as an alternative to the One Church, Connectional Conference, Traditional and Modified Traditional plans, is an underdog because it is not on the list suggested by the Council of Bishops in May.

“We saw that all the plans proposed by the Commission on a Way Forward … still deemed LGBTQI individuals and our families and our communities as expendable,” says the Rev. Alex da Silva Souto, an author of the Simple Plan and a New York Conference delegate to the special 2019 General Conference Feb. 23-26 in St. Louis. “So we had to move forward with a proposal that would reduce the harm as best as we can.”

In contrast, the Simple Plan harms no one, da Silva Souto says. It calls for the elimination of all language in the denomination’s Social Principles and Book of Discipline that limits the role of homosexual people in the church.

“It allows for local congregations and conferences to continue with their own process of discernment without forcing them at a particular pace or a particular direction,” da Silva Souto says.

The Simple Plan is easier to implement than the other plans because it does not require a gauntlet of constitutional amendments or restructuring of the denomination.

The Rev. Alex da Silva Souto and Karen G. Prudente are both New York Conference delegates to the special 2019 General Conference. Da Silva Souto is a co-author of the Simple Plan and Prudente is a co-signer.

“Why not simply remove what’s been causing harm, without proposals of restructuring as well?” da Silva Souto says. “We may not withstand an overhaul and restructuring of how we operate as a connection.”

Karen G. Prudente, a member of Christ Church United Methodist in New York City and a delegate to the special conference, notes that similar arguments have been resolved in the church over the years.

“This is just another issue.”

Removing the discriminatory language from the Book of Discipline and Social Principles would open up opportunities for service and possibly grow the church, supporters say.

“We’re here to offer ourselves and our lives,” Prudente says. “We want to serve God and continue to offer our best and be recognized as children of God.”

United Methodists for the Simple Plan, a collective of United Methodists who support the plan, say in a statement that “institutionalized discrimination against LGBTQIA+ Christians has wrought division and harm, yet queer persons have continued to bear forth the fruits of the Spirit in their lives and in their loving.”

The lead writer of the statement is the Rev. Jay Williams, lead pastor of Union United Methodist Church in Boston.

In addition to the Simple Plan, delegates to the special General Conference Feb. 23-26 in St. Louis will consider many different proposals. Learn about the most prominent of those plans.

The One Church Plan

“We implore our leaders to awaken their consciences to the brutal consequences of granting permission for discrimination justified by blasphemous faith claims about inherent human superiority.”

In 1972, United Methodists added the statement to its Social Principles saying, “We do not condone the practice of homosexuality and consider this practice incompatible with Christian teaching.”

“The Simple Plan is a continuation of a prayer for healing that started 46 years ago,” says da Silva Souto. “We are praying that this is the time. We are not giving up. The Holy Spirit has brought us to this point, and the Holy Spirit will not abandon us.”