Unhappiness over some episcopal leaders’ posture toward disaffiliation and a new, traditional denomination boiled over Nov. 3 at The United Methodist Church’s South Central Jurisdictional Conference.

The Rev. Stan Copeland took the floor to ask that the jurisdiction’s college of bishops address the conduct and status of three bishops he said have provided “promotion and support” to the breakaway Global Methodist Church — despite having taken vows to support The United Methodist Church.

Copeland specifically named Texas Conference Bishop Scott Jones, retired Bishop Robert Hayes Jr. and former Bishop Mike Lowry, who earlier this year resigned from the Council of Bishops and now is a member of the Global Methodist Church, where he holds the title bishop emeritus.

Copeland said they have harmed The United Methodist Church by acting in support of churches disaffiliating and need to be held accountable.

“Simply stated, one cannot play for the Astros and pitch for the Phillies,” Copeland, pastor of Dallas’ Lovers Lane United Methodist Church and a North Texas Conference delegate, said of the three in his floor speech.

Louisiana Conference Bishop Cynthia Fierro Harvey was presiding when Copeland asked the college of bishops to answer specific questions he posed about Jones, Hayes and Lowry. 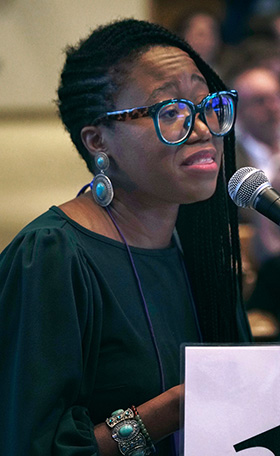 Shandon Klein, lay delegate of the North Texas Conference, speaks on a resolution under consideration at the South Central Jurisdictional Conference meeting in Houston on Nov. 3. Photo by Todd Rossnagel, Louisiana Conference.

“We can work, I think, to commit to addressing your questions before the end of our time together,” Harvey said.

By late afternoon on Nov. 3, Missouri Conference Bishop Bob Farr, president of the jurisdiction’s college of bishops, reported to the delegates that the college would need more time to address Copeland’s request fully.

Jones was present for Copeland’s remarks but declined to comment afterward. He is due to retire as a United Methodist bishop at the end of the year.

Hayes, who oversaw the denomination’s Oklahoma Area before retiring in 2016, was reached by phone. He declined to comment, other than to say he remains a retired United Methodist bishop and has not advocated for the Global Methodist Church.

Copeland asked the college of bishops to report on whether Lowry — former bishop of the Central Texas Conference — had resigned his United Methodist clergy credentials.

Lowry told UM News by phone on Nov. 3 that he had not done so, and that his clergy ordination has been recognized by the Global Methodist Church. He said he wishes The United Methodist Church well, but that he’s part of the new denomination.

“This is not my fight,” Lowry said of United Methodist controversies.

In an interview, Copeland said Jones and Lowry as active bishops created a climate that has led to disproportionate numbers of Texas Conference and Central Texas Conference churches and clergy deciding to disaffiliate.

“It didn’t seem like it made much sense for us to go through this jurisdictional conference and not address the obvious pain in some conferences,” Copeland told UM News.

Copeland’s floor effort found a challenge from the Rev. Tommy Williams of the Texas Conference. He went to a microphone to say that disunity in The United Methodist Church began decades ago, long before recent bishops’ leadership, and has been caused by lack of enforcement of the Book of Discipline.

But the subject of who is and isn’t supportive of The United Methodist Church was clearly on most delegates’ minds.

Earlier on Nov. 3, they overwhelmingly approved a resolution calling on those United Methodists who have decided to leave the denomination to refrain for the rest of their time as United Methodists from exercising leadership in local churches, as well as in conferences, boards and other United Methodist entities.

Shandon Klein, a lay delegate from the North Texas Conference, spoke for the motion. In an interview, she described it as aspirational, not binding, and not intended to sever relationships.

“We’re still in connection … but in terms of leadership, making decisions for The United Methodist Church, it’s not fair” for those intending to leave to have key roles, Klein said.

The floor discussion of bishops and disaffiliation occurred one day after the South Central Jurisdictional Conference elected its first female African American bishop, the Rev. Delores “Dee” Williamston, and the first Native American bishop of The United Methodist Church, the Rev. David Wilson. The Rev. Laura Merrill also was elected on the first ballot.