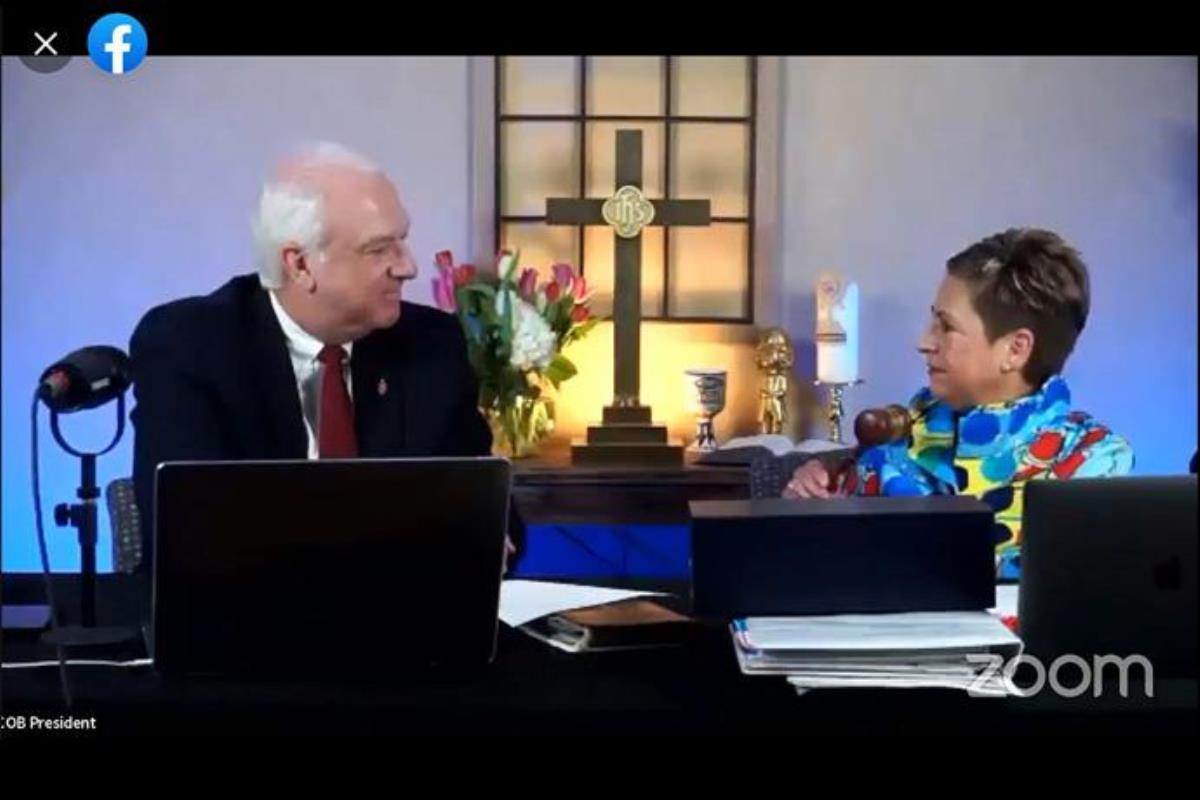 The new Council of Bishops president shared his hopes for a renewed United Methodist Church while lamenting the imminent departure of some to a breakaway denomination.

Those breaking away include a fellow bishop.

But even as a new denomination gets off the ground, Bishop Thomas J. Bickerton urged United Methodists to celebrate a launch of their own.

“In the midst of heartache of separation, let us launch and proclaim once again a unity of purpose in ministry together,” Bickerton, who also leads the New York Conference, preached April 29.

“In the midst of legal documents and term sheets, let us launch and affirm the reality that United Methodists are Bible-based, faith-driven, mission-focused and global in scope.”

The United Methodist Council of Bishops concluded its five-day spring meeting with Bickerton receiving the president’s gavel from his predecessor, Louisiana Conference Bishop Cynthia Fierro Harvey. The bishops also acknowledged what Bickerton called a “sad and sobering reality” — the May 1 start of the Global Methodist Church, a theologically conservative denomination.

The bishops delayed the start of the April 29 livestream on Facebook for a closed session to discuss the resignation of one of their number: retired Bishop J. Michael Lowry.

Lowry, who retired Jan. 1 after leading the Central Texas Conference for more than 13 years, serves on the Global Methodist Church’s Transitional Leadership Council.

Lowry responded with his own letter April 28 notifying the Council of Bishops that he was resigning from the episcopal office to join the Global Methodist Church.

“I take this action with a heavy heart and deep grief,” he wrote before enumerating his reasons for leaving. Lowry published both Harvey’s letter and his response in the online journal Firebrand.

The Global Methodist organizers, including Lowry, are splitting from The United Methodist Church after years of mounting frustration with debate and defiance of church bans on same-sex marriage and the ordination of noncelibate gay clergy.

More from the bishops

Retired Bishops Bruce Ough and Sally Dyck will continue in their roles as Council of Bishops executive secretary and ecumenical officer, respectively.

The coming General Conference — The United Methodist Church’s top lawmaking assembly — faces multiple proposals for some form of separation. However, after the third postponement of the international legislative assembly because of the pandemic, Global Methodist organizers decided no longer to wait for General Conference action.

The United Methodist Commission on the General Conference, which plans the big meeting, made the decision to postpone. Bishops do not have a vote on the commission, but they still have faced ire about the delay.

Meanwhile, May 1 passed with little fanfare. Both United Methodist and Global Methodist leaders expect any potential separations to take some time.

The Rev. Keith Boyette, chairman of the Transitional Leadership Council, wrote shortly before May 1 that the launch date was chosen for “practical reasons.”

Annual conferences have final say on whether a church can disaffiliate. However, the question of whether U.S. annual conferences themselves can leave under current United Methodist church law is now before the Judicial Council, the denomination’s top court.

Boyette wrote that the Global Methodist Church will have clergy and congregations from day one, but he did not say how many. The Bulgaria-Romania Provisional Annual Conference also voted to be part of the new denomination by May 1. However, the Judicial Council faces questions about whether that vote violated church law.

For his part, Bickerton said that every day he prays that churchgoers can bless one another and mutually recognize each person’s sacred worth.

“I pray that we’ll somehow stop this fight and find a way to move on in the rediscovering of our mission to make disciples of Jesus Christ for the transformation of the world,” he said.

While matters of separation will take time to sort out, United Methodist ministry continues.

During their spring meeting, the bishops heard an update on how the United Methodist Committee on Relief — in coordination with European United Methodists and ecumenical partners — is responding to the human costs of Russia’s invasion of Ukraine.

Roland Fernandes, the top executive of the United Methodist Board of Global Ministries and UMCOR, said the invasion has led to the largest refugee crisis in Europe since World War II. UNICEF reports that about half of Ukrainian children have been forced from their homes. At the same time, the number of Ukrainian refugees has not eclipsed the volume of displaced people from Syria, Fernandes said. He said UMCOR, which was founded to help refugees during World War II, is working to respond to refugees from all around the globe.

“While all the churches in the region may be comparatively small, they have carried a tremendous load with generosity of spirit and care that has been very remarkable,” Fernandes said.

In Estonia, a United Methodist church camp is now housing refugees. In the Czech Republic, diaconal ministries and local churches also are providing refugees with shelter. In Romania, UMCOR has provided a grant so churches can provide support care, shelter and food at a local hotel for the refugees who are passing through. UMCOR also is working to provide grants in other European countries.

Germany Bishop Harald Rückert said his country has shown a welcoming attitude toward Ukrainian refugees. But there are still people from Africa and Asia, including Afghanistan, who are seeking safety and asylum in Europe.

“We as Christians have to raise our voices and advocate for them as well,” Rückert said. “We have to advocate for all peoples in need.”

Amid wars, migration and internal struggles, Bickerton expressed his belief that The United Methodist Church still can bring a vital Christian witness to a hurting world.

“Let’s commit ourselves to spending most of our time positioning our church for the next chapter of our life together,” he said. That includes “talking about the movement of the Spirit in our midst, the exciting days that lie ahead and the joy we will have being able to live out our calling to preach the good news of God’s love.”

From California to Louisiana to Iowa, United Methodists are responding with prayer, comfort for the grieving and renewed calls for advocacy against gun violence.
Church Leadership

The Rev. Joel Mora Peña served as an episcopal leader in the Methodist Church of Mexico before immigrating to the U.S. and leading United Methodist churches as a pastor in the Rio Grande Conference. He died Jan. 3 at age 88.