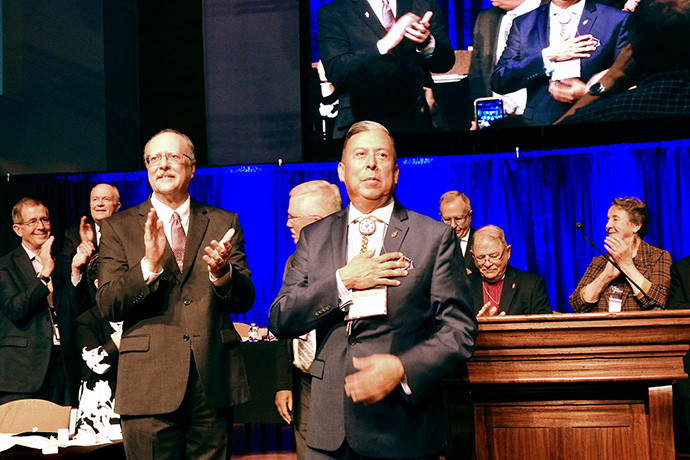 The Rev. David Wilson, assistant to the bishop of the Oklahoma and Oklahoma Indian Missionary Conference, has been elected as bishop in The United Methodist Church’s South Central Jurisdictional Conference, becoming the denomination’s first Native American bishop.

Delegates elected Wilson, age 59, Nov. 2 at the jurisdiction’s meeting in Houston on the first ballot. He received 92 votes out of 151 valid ballots cast. He needed 91 to be elected (60% of valid ballots).

All three of the jurisdiction’s bishops — Wilson, the Rev. Delores "Dee" Williamston and the Rev. Laura Merrill — were elected on the first ballot. The delegates and audience at First United Methodist Church Westchase broke into an extended standing ovation when the vote totals were read.

Wilson has been the assistant to the bishop for the Oklahoma Indian Missionary Conference since 2021, following 19 years as a conference superintendent. He was lead coordinator for the North Oklahoma City Native American Ministry for eight years, following eight years as a pastor of a church in Norman, Oklahoma. He served seven years as director of promotions/interpretations for the Oklahoma Indian Missionary Conference, after being pastor of a church in Tahlequah, Oklahoma, and campus minister for the Native American Campus Ministry program at Northeastern State University.

He received an undergraduate degree in mass communications from Oklahoma City University, a master’s degree in divinity from Phillips Theological Seminary in Tulsa, Oklahoma, and an honorary doctorate in humane letters from Bacone College in Muskogee, Oklahoma.

Wilson said word spread fast about his election as the first Native American bishop of The United Methodist Church.

“My phone is blowing up already,” he said. “I’m hearing from Native people around the country.”

Wilson was especially pleased to have been elected by South Central Jurisdictional Conference delegates on the same first ballot as Delores “Dee” Williamston, who becomes the jurisdiction’s first female African American bishop.

“We made history,” Wilson said.

In The United Methodist Church, bishops are ordained elders who are called to “lead and oversee the spiritual and temporal affairs of The United Methodist Church.” Bishops, in consultation with district superintendents, are responsible for appointing clergy. They also preside at annual conferences, jurisdictional conferences and General Conference, the denomination’s top lawmaking assembly.

Burke is a content specialist for the Great Plains Conference. Sam Hodges contributed to this report.