The United Methodist Church formed in 1968, but it got rhythm — a lot more of it, anyway — in 1996. That’s when the denomination’s official Spanish-language hymnal debuted.

These hymns had their own theological points to make. And they were, on the whole, swinging in a way English-language hymns weren’t. The selections even included a tango from Argentina.

Raquel Martinez edited Mil Voces (the hymnal’s shorthand name) and recalls introducing it to an Anglo church in rural Nebraska. The small congregation included an elderly man famous in the pews for never singing.

He didn’t that day either. But as Martinez sat at the piano and played a lively hymn by Salvadoran composer Guillermo Cuéllar, she observed a small miracle.

“I saw this man keeping time with his foot,” she said. “You can’t stand straight with this music. You have to move.”

Mil Voces turned 25 this year, a milestone that was supposed to have been observed at General Conference. With the legislative assembly on hold because of the pandemic, a livestream service marking the hymnal’s anniversary will be held Dec. 5 at La Trinidad United Methodist Church in San Antonio.

It will include a processional with commemorative edition copies of Mil Voces. Retired Bishop Joel Martinez — husband of Raquel — will lead a Litany of Thanksgiving for Mil Voces’ influence on the Methodist witness in the U.S., Latin America and the Caribbean. 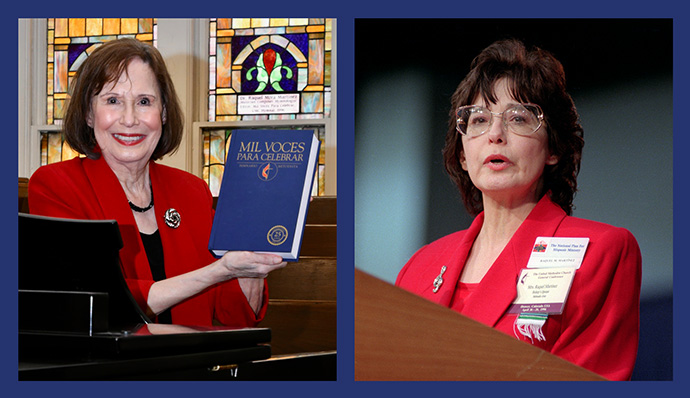 Raquel Martinez, shown at the piano at La Trinidad United Methodist Church in San Antonio in 2021 (left) and at the 1996 General Conference in Denver, where she led delegates in singing from Mil Voces Para Celebrar. Martinez edited the Spanish-language hymnal and a pane in the stained glass window at left is dedicated to her for having had that key role. Photos by the Rev. John Feagins (left) and Mike DuBose, UM News.

The hymnal continues to make a profound contribution, according to Michael Hawn, professor emeritus of church music at Perkins School of Theology.

“This resource enriches the entire church by giving us a window to the spirituality and struggles of Spanish-speaking Christians that are integral to the United Methodist identity and future,” Hawn said by email.

Before Mil Voces, there were Methodist songbooks and hymnals in Spanish, including from the Rio Grande Conference, now merged into the Rio Texas Conference.

But those books didn’t have the extensive liturgy and prayer components of the United Methodist Hymnal, and they offered missionaries’ sometimes dubious translations of English-language hymns, Raquel Martinez said.

In the early 1990s, the United Methodist Publishing House and Board of Discipleship — urged on by MARCHA, the denomination’s Hispanic/Latino caucus — began to collaborate on a more comprehensive Spanish-language hymnal.

“I was just the traffic cop,” Galvan, now retired, recalled. “The work is really a tribute to Raquel Martinez.” 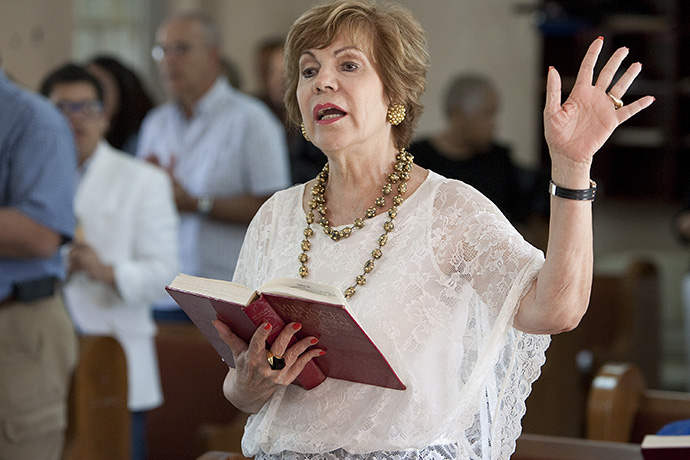 Martinez grew up in Mexico, daughter of a Methodist Church of Mexico pastor. She studied at Lydia Patterson Institute, the United Methodist secondary school in El Paso, as well as at the University of Texas at El Paso and Perkins.

On her own, and as a bishop’s wife, she knew Methodist theology and ways, and was an accomplished pianist, arranger and composer, with fluency in Spanish and English.

Diana Sanchez-Bushong agrees with Galvan that in Martinez the church had not just an editor but a maestro.

“She was a fabulous leader,” said Sanchez-Bushong, a Discipleship staff member assigned to the committee. “I think she should have been a bishop, too.”

The committee met periodically for four years, in sessions members recall as filled with singing, prayer and laughter. Those at the table included natives of Mexico, the Dominican Republic, El Salvador, Puerto Rico and south Texas, and in choosing texts, they had to work through the differences in Spanish dialects among their homelands.

The committee struggled for a hymnal title until Galvan relayed the Rev. Ignacio Castuera’s suggestion of Mil Voces Para Celebrar. That translates loosely to “O for a Thousand Tongues to Sing,” the Charles Wesley hymn that is prominent in both Mil Voces and the United Methodist Hymnal.

When that proposed title got its vote by committee, “all hands went up,” Martinez recalled. 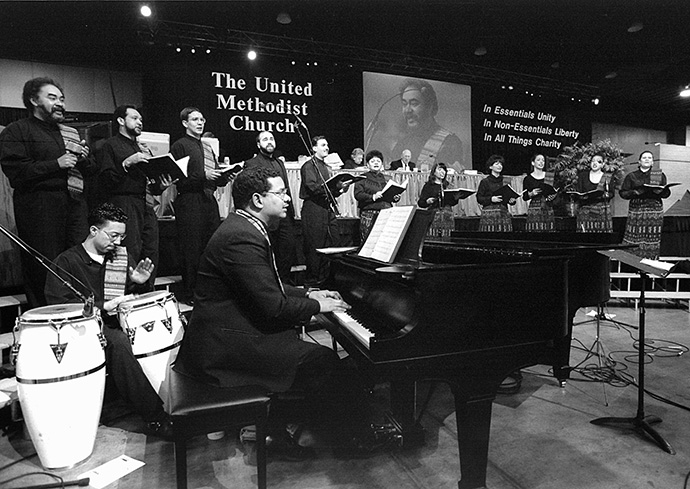 Later in the Denver gathering, a presentation of Mil Voces doubled as a worship service. Leading the service were Raquel Martinez and the Rev. Minerva Carcaño, a committee member and future bishop.

For some in the crowd, such as Raúl Alegría, the new hymnal was a symbol — a flag raised high, if a bit belatedly, for Spanish-speakers of United Methodism.

“The approval of Mil Voces Para Celebrar was a recognition by my denomination that Hispanics/Latinos belong in the UMC,” said Alegría, former treasurer/CFO of the United Methodist Board of Higher Education and Ministry. “Somos la iglesia también! We are the church as well!”

A service recognizing the 25th anniversary of Mil Voces Para Celebrar, the official Spanish language hymnal of The United Methodist Church, will be Dec. 5 at La Trinidad United Methodist in San Antonio, beginning at 1:30 p.m. U.S. Central time.
The service will include hymns representing various nations of the Americas and an opening procession with 25th anniversary commemorative copies of the hymns. Some of those who helped to compile the hymnal will share reflections in person or through video presentations.
The service will be livestreamed at this link.

Mil Voces follows the organization of the United Methodist Hymnal and joins it in offering sacramental services and rites, the creeds and a collection of psalms and prayers.

But Mil Voces is no imitation. Mary Ellen Clinard, director of worship at First United Methodist Church in Middletown, Ohio, found that out when she ordered a copy to use in their bilingual and Spanish-language worship times.

“What I thought I was ordering was a literal Spanish translation of the United Methodist Hymnal,” she said. “When I received it and began looking through it, I realized it was a totally different hymnal.”

That was the vision from the beginning, said Neil Alexander, former top executive of the Publishing House.

“Mil Voces was crafted from the ground up as a new compilation of hymns, tunes and liturgical resources, especially suited for a cross-section of Latinx communities,” he said.

The hymnal committee looked for tunes that lent themselves to instruments widely used in Spanish-speaking cultures, including guitars and maracas. The tango hymn “Tenemos Esperanza” by Argentine Methodist Bishop Federico José Pagura was the first in that musical style to be included in a North American denominational hymnal, Hawn said.

Pagura is represented in Mil Voces with translations as well, including of “O for a Thousand Tongues.”

“Echoes of Liberation Theology were dominant in Pagura’s translation, as the ‘great Redeemer’ in stanza one becomes the ‘Liberador’ or liberator,” Hawn wrote in his online History of Hymns series.

Raquel Martinez composed a handful of tunes for the hymnal, as well as providing arrangements. Her favorite texts include Mexican composer Vicente Mendoza’s “Cuán Firme Cimiento,” a translation of “How Firm a Foundation.”

“It was so powerful,” she said. “I decided I wanted that hymn sung at my funeral.” 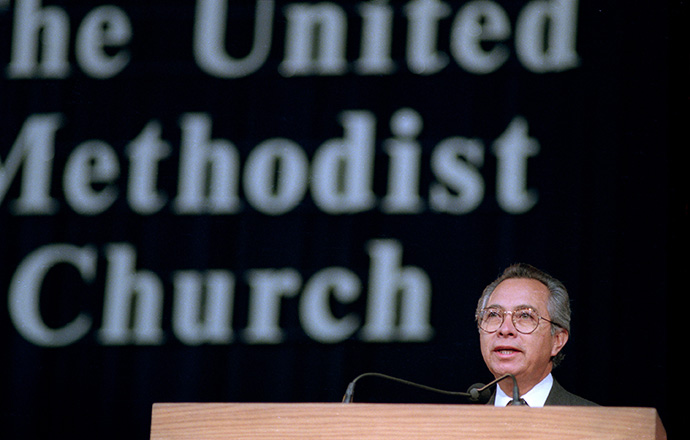 Clinard said she quickly came to value the different rhythms offered by Mil Voces, as well as how texts were supported by more emotional music than is typical in English hymnody.

For Lockward, the hymnal’s inclusion of coritos (short choruses) is an indication of the wealth and diversity of the contents.

“(Mil Voces) put on an equal footing all musical vehicles and styles where the spirit speaks to people,” he said.

About 30,000 copies of Mil Voces are in print. While that’s a fraction of sales for the United Methodist Hymnal, Mil Voces can be found in many churches with Spanish-language or bilingual worship. It’s used in the Spanish-language Course of Study program for licensed local pastors.

Raquel Martinez is at work on a supplement to Mil Voces, and hopes that songbook will be published next year.

But for now Mil Voces itself is the subject of celebration, and properly so, said Bishop Joel Martinez.

“The publication of Mil Voces Para Celebrar was a message to Hispanics/Latino Methodism that their language, their culture and their gifts were welcomed and essential to the mission and ministries of The United Methodist Church.”