Supporters of the Simple Plan acknowledge the legislation faces long odds at the special General Conference next month.

Still, they hope the plan — which removes all church restrictions related to homosexuality — will help shape the denomination’s way forward.

“We don’t have the votes right now,” said the Rev. Austin L. Adkinson, one of the main drafters of the plan submitted on behalf of the unofficial United Methodist Queer Clergy Caucus. But, he added, the plan is still part of the conversation.

“We’re trying to pull people forward and trying to meet some people where they are.”

Adkinson was one of the speakers at a Jan. 12 meeting that brought nearly 40 advocates for LGBTQ equality to United Methodist Drew University Theological School. They came to learn more about the Simple Plan and talk strategy ahead of the Feb. 23-26 legislative assembly in St. Louis.

Not all the participants specifically champion the Simple Plan, but all seek greater inclusion of LGBTQ individuals in the life of the church.

They also share both hopes and anxieties about the special General Conference, which aims — after more than 45 years of often painful debate — to set the direction on how the denomination ministers with LGBTQ individuals.

Currently, the denomination’s stance on homosexuality includes bans on same-sex unions and the ordination of “self-avowed practicing” gay clergy. In recent years, a number of United Methodists have publicly defied those prohibitions while other church members have threatened to bolt unless those rules are enforced.

The Rev. Alexandre da Silva Souto, co-convener of the United Methodist Queer Clergy Caucus and a General Conference delegate from the New York Conference, said the caucus intends the Simple Plan to be “a little bit more than the crumbs the institution is proposing.”

“From the bottom of our hearts, the intention is healing and the wholeness of our denomination,” he said. 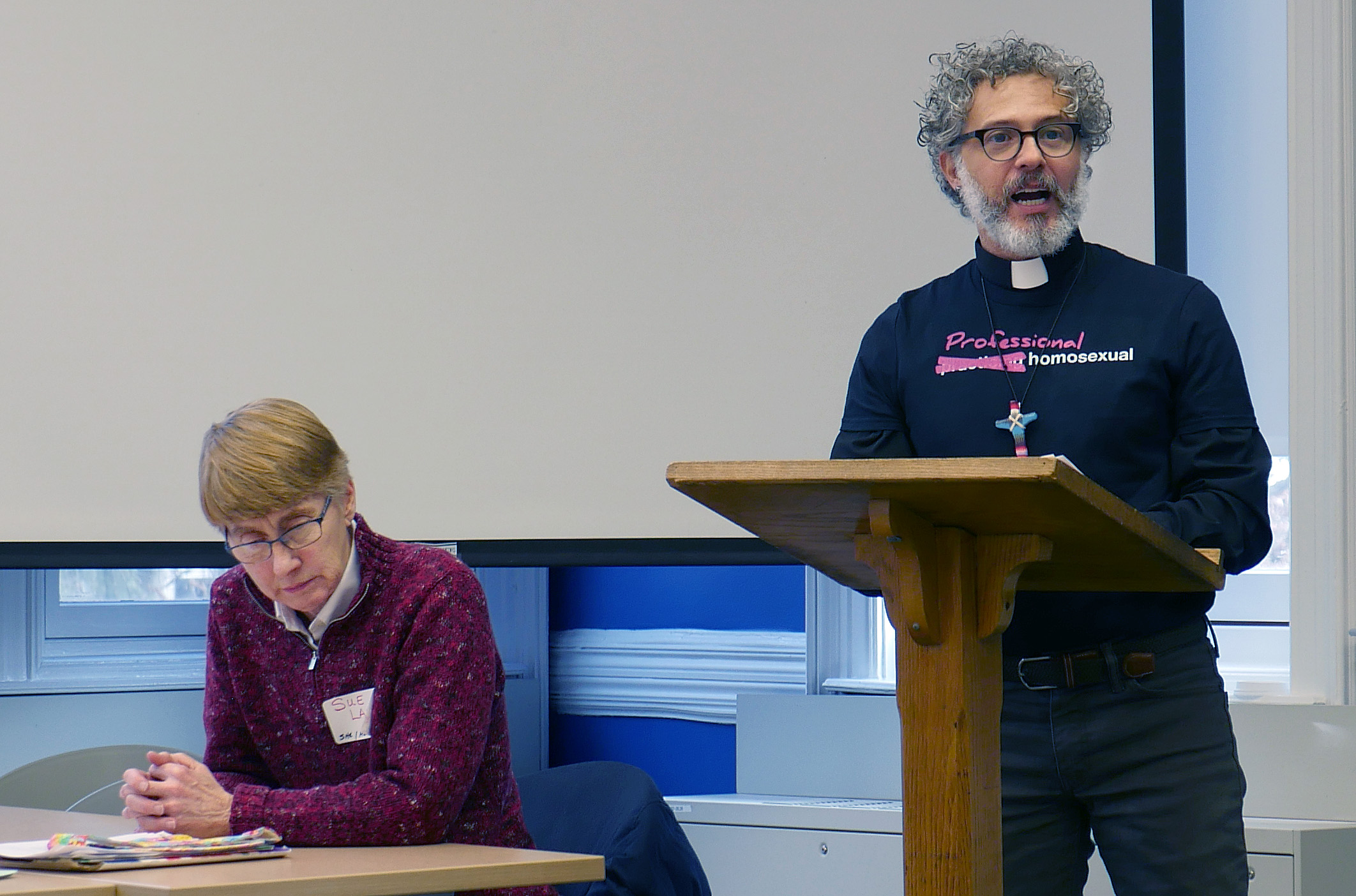 The Rev. Alex da Silva Souto, pastor and co-convener of the unofficial United Methodist Queer Clergy Caucus, talks about the Simple Plan. Sue Laurie, a longtime activist for LGBTQ equality in the church, sits listening. Photo by Heather Hahn, UMNS.
The Rev. Traci C. West, professor of ethics and African-American studies at Drew, challenged the LGBTQ advocates to think about the consequences of not seeking full equality. She also called out what she sees as the sins of silence and gradualism.

“So often we don’t have a conversation about the lives of lesbians, gay people, transgender people, bisexual people, intersex people, gender-nonconforming people,” she said.

The most marginalized LGBTQ individuals have seen their livelihoods and sometimes their lives ended by anti-gay laws and sentiments, West said.

A number of those present cited the church’s strong condemnation of the practice of homosexuality as contributing factors toward youth suicides.

According to U.S. Centers for Disease Control reports, suicide is the second leading cause of death among U.S. young people ages 10 to 24, and lesbian, gay and bisexual youths are five times as likely to attempt suicide as their heterosexual peers. In 2014, church leaders heard from a United Methodist mother whose son committed suicide after being told by a youth minister that he was going to hell.

What the church teaches matters, said the Rev. Vicki Woods, a retired pastor in the New England Conference.

“Sometimes people in the church feel so powerless. They think the church has lost its leadership,” she said. “And yet nothing is used more than the church to give permission to harm LGBTQI people.”

At the same time as the Drew meeting, a key General Conference committee met outside Dallas to decide which legislative petitions can be considered at the lawmaking gathering.

Altogether, the Committee on Reference cleared 78 petitions for consideration at the special General Conference — including the eight petitions in the Simple Plan, the modified Traditional Plan and all three plans in the Way Forward Commission report.

Of the proposals cleared for consideration, the Simple Plan is perhaps most similar to the One Church Plan.

The One Church Plan, which a majority of bishops recommends, would leave decisions to allow same-gender weddings up to churches and gay ordination up to annual conferences.

The plan adds protections for clergy and bishops who as a matter of conscience feel they can’t officiate at such unions or ordinations. A number of Simple Plan backers see those assurances as endorsing discrimination.

Still, other LGBTQ advocates think the One Church Plan not only has more of a chance of winning support at General Conference but also offers a clear step forward.

Neither the One Church nor the Simple Plan would compel churches to hold same-sex weddings or force conference boards of ordained ministry to accept openly gay clergy candidates.

The plan for this short General Conference is for the 864 delegates to spend the first day in prayer, the second day choosing which plan to perfect, the third day in a legislative committee refining the plan, and the last day on final voting.

Adkinson noted that while it’s impossible to entirely predict what will happen, the Simple Plan can be part of the conversation and possibly part of amendments brought to the floor.

Helen Ryde, who works for the unofficial advocacy group Reconciling Ministries Network in the Southeastern Jurisdiction, said her whole heart is for the church to move toward the policies in the Simple Plan. But her main concern is that the Traditional Plan does not become church policy.

That plan and a modified version seek to strengthen enforcement mechanisms for current policies, including instituting mandatory penalties for violations and encouraging those who disagree with the church’s stance to leave.

“I don’t want to reinforce this idea that the Simple Plan dilutes the One Church Plan, but I do want to raise the concern that the Traditional Plan is catastrophic,” she said.

“My perspective on this is: Do less harm.”

The group promotes legislation it says will allow full participation of LGBTQ individuals in the life of the denomination.
Judicial Council

Reference committee meets to decide which petitions are ‘in harmony’ for legislative gathering to address unity amid conflict over homosexuality.