Options for the looming special session of the General Conference of The United Methodist Church have become clearer with a key panel’s ruling on which legislative petitions can be considered.

The Committee on Reference decided all 48 petitions in the Commission on a Way Forward report – including those of the One Church, Traditional and Connectional Conference Plans – are “in harmony” with the Council of Bishops’ call for the Feb. 23-26 legislative gathering in St. Louis.

Another 30 petitions got the go-ahead, meaning 78 petitions total have been cleared for General Conference 2019, a gathering of the denomination’s top legislative assembly aimed at helping The United Methodist Church stay unified despite deep conflict over homosexuality.

Petitions outside the Way Forward report that deal with LGBTQ inclusion or exclusion in the church made the cut. So did petitions that would make it easier for local churches to exit the denomination. 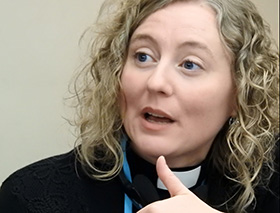 The Rev. Katie Dawson was among the committee on reference members meeting Jan. 11-12 near Dallas to decide which petitions are “in harmony” with the stated call of the upcoming special General Conference of The United Methodist Church. Photo by Sam Hodges, UMNS.

Two very different legislative alternatives, the Simple Plan and Modified Traditional Plan, survived. But petitions that would change the episcopacy and Judicial Council did not. A petition that would allow for dissolution of the denomination also was ruled out of harmony.

The reference committee, consisting of clergy and lay General Conference delegates from all jurisdictions and central conferences, met Jan. 11-12 at an airport hotel near Dallas.

Committee members arrived at criteria for their decisions but acknowledged they were feeling their way through an extraordinary screening process.

“We don’t have a template for what we’re doing,” said the Rev. Chuck Savage, committee chair, as the session got underway.

He and 18 other committee members present decided to focus on relevance rather than the merits or constitutionality of petitions.

“Everyone understood our task and went out of their way to ignore their own opinion about any piece of legislation and solely consider whether it was in harmony of the call,” said Lynn Caterson, a committee member from the Northeastern Jurisdiction.

Long tensions over the denomination’s stance on homosexuality — including bans on same-sex unions and ordination of gay clergy — boiled over at the 2016 General Conference in Portland, causing open talk of schism. Delegates asked the Council of Bishops to lead the church through the crisis.

The bishops appointed a Commission on a Way Forward. The commission’s report last year included legislation for the One Church, Traditional and Connectional Conference Plans — three distinctly different options.

Bishops also called for the special General Conference. Under church law, only petitions deemed in harmony with the stated call or purpose of the gathering can be considered at such a conference — unless two-thirds of the delegates vote to take up something else.

The bishops issued a first call that was then revised to read: “The purpose of this special session of the General Conference shall be limited to receiving and acting upon a report from the Commission on a Way Forward based upon the recommendations of the Council of Bishops.”

The church’s Judicial Council ruled last May that it was up to General Conference “to determine, in the first instance, through its committees, officers and presiders,” whether a petition is in harmony with the call. That decision allowed petitions outside the Way Forward report to be considered in St. Louis — if those petitions were deemed in harmony.

The Commission on General Conference designated the reference committee for the important screening.

Before a more typical General Conference, that committee works obscurely, assigning petitions to legislative committees and consolidating similar petitions. Not this time.

“The history has been that the (response to) the Committee on Reference is, ‘Yeah, whatever.’ On this deal, folks are going to care deeply,” said the Rev. Morris Matthis, a committee member from the South Central Jurisdiction.

The committee quickly and unanimously decided that all petitions in the Way Forward report would go on to General Conference. And it agreed with the Rev. Gary Graves, General Conference secretary, that 34 petitions were invalid because of formatting, failure to address the Book of Discipline or other basic errors. Those petitions were not included in the Advance Daily Christian Advocate.

Most of the committee’s time was spent arriving at and applying criteria for the remaining 51 petitions. One more was declared invalid, 30 more in harmony and 20 out of harmony.

The committee took into account whether petitions dealt with the same paragraphs of church law as those “opened” or addressed by the Way Forward report plans.

Members also gave a green light to petitions directly concerned with LGBTQ inclusion or exclusion in the church and those seeking to correct or perfect petitions in the Way Forward report.

“If it helps the plan, whichever plan, to perfect itself, then it should be considered,” said Rudolph Merab, a committee member from the West Africa Central Conference.

Those plans are backed by church groups that favor keeping the restrictions against same-sex unions and ordination of gay clergy, as well as boosting enforcement against violations.

The reference committee also cleared for consideration in St. Louis petitions that would ease the way for churches to leave the denomination and retain their property.

A petition that would allow for the dissolution of the denomination was found out of harmony, with reference committee members concluding that the Way Forward report and its plans were focused on continuing The United Methodist Church.

“I feel like dissolving the whole United Methodist Church is a million miles away from where we started,” Matthis said.

Petitions that sought reforms in the episcopacy were among those the committee found insufficiently related to the Commission on a Way Forward’s work to be in harmony, as were some dealing with restructuring the church.

The Committee on Reference’s report, which lists the petitions determined to be in harmony and which were not, is available online and will be published in the Daily Christian Advocate.

The commission is expected to announce soon further details about how petitions will be processed.

The reference committee voted unanimously on nearly every decision. Though discussions were intense, civility never flagged and there was tension-puncturing laughter along the way.

Members celebrated communion and hugged at the end.

“It’s amazing to me what happens when the Holy Spirit shows up,” said Savage, in concluding remarks as chair. “There are a lot of diverse opinions in this room, but I just want to say congratulations and thank you for the work that’s been done.”

Hodges is a Dallas-based writer for United Methodist News Service. Contact him at 615-742-5470 or [email protected]m.org. To read more United Methodist news, subscribe to the free Daily or Weekly Digests.