To find a way forward on the denomination’s homosexuality debate, bishops are recommending the church allow more freedom at the conference and local church levels.

Under what the Council of Bishops calls the One Church Plan, decisions about whether to ordain LGBTQ clergy or to officiate at same-gender unions would be made closer to the congregational level.

The plan would remove the restrictive language against the practice of homosexuality in the Book Discipline, the denomination’s policy book. The plan also adds assurances to pastors and conferences who in good conscience cannot perform same-sex weddings or ordain “self-avowed practicing” gay clergy that they don’t have to do so. Central conferences — church regions in Africa, Asia and Europe — could maintain current restrictions.

The plan “encourages a generous unity by giving United Methodists the ability to address different missional contexts in ways that reflect their theological convictions,” said the bishops’ press release.

While the majority of bishops recommend the One Church Plan, the bishops also will submit two additional plans as part of their report to the special General Conference on Feb. 23-26, 2019, in St. Louis. All three possibilities had support among some of the bishops.

The other two plans on the table are: 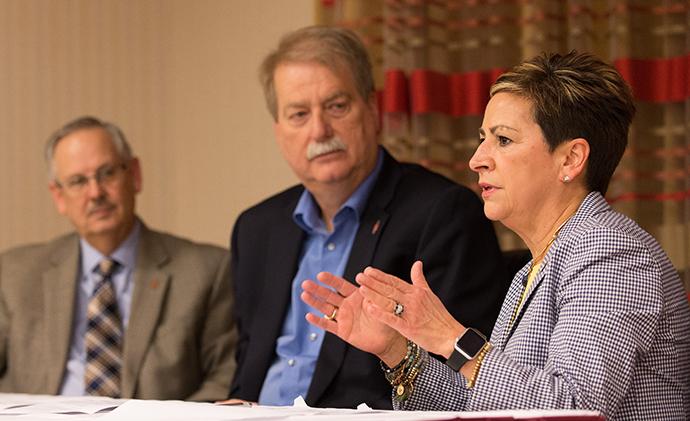 Bishop Cynthia F. Harvey (right) answers questions during a press conference about the United Methodist Church's Way Forward plan to address how the denomination ministers with LGBTQ individuals at the conclusion of the church's Council of Bishops meeting in Chicago. She is flanked by Bishops Bruce R. Ough (left) and Kenneth H. Carter. Photo by Mike DuBose, UMNS.

“Unity is a gift from God, but it’s also something you have to work for,” said Florida Area Bishop Kenneth H. Carter Jr., the newly installed Council of Bishops president, during a press conference. He added that he is hopeful for the process.

Carter is one of three bishops who serves as moderator of the Commission on a Way Forward, a 32-member, bishop-appointed group that has advised the council on possible options forward.

The bishops do not plan to release their vote tally on the One-Church Plan, said Dakotas-Minnesota Area Bishop Bruce R. Ough, outgoing Council of Bishops president.

“Typically when I’ve worked with consensus, you arrive at a place where everybody says I can stand here,” Ough said. “If you use that definition, it’s fair to say we don’t have consensus. But it is fair to say we have strong affirmation.”

At the same press conference, Ough, Carter and Louisiana Area Bishop Cynthia Harvey all declined to say what plan or plans the bishops would submit to General Conference, saying that information would be released in a press release later in the afternoon. The release came out about three hours later.

The press release said: "While the bishops recommended the One Church Plan, they affirmed that the Connectional Conference Plan and the Traditionalist Plan held values that are important to the life and work of the church and will be included in the final report to the Special Session of General Conference..."

Before heading to General Conference, all three plans still may face hurdles.

At the bishops’ request, the Judicial Council — the denomination’s top court — will meet May 22-25 to address any requests stemming from the bishops’ submissions. The bishops also are requesting the top court have an oral hearing as part of its session.

Passing of the gavel 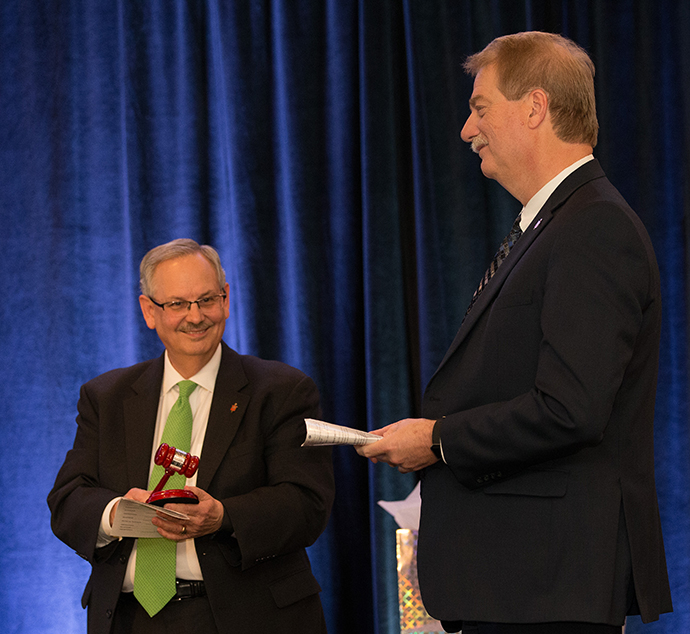 Bishop Kenneth H. Carter Jr., the new president of the Council of Bishops, received the official gavel from Bishop Bruce R. Ough in a May 3 ceremony transferring leadership of the council to Carter.

The bishops have not yet determined all the questions they will ask the Judicial Council, Ough said.

The church court already has agreed to the bishops’ request to rule on whether other petitions — in addition to the report from the Council of Bishops — can be submitted prior to the convening of the special General Conference. The deadline to submit petitions to General Conference is July 8.

The bishops’ recommendation aims to bridge a decades-long division that has grown so intense that, during the 2016 General Conference, rumors of a potential church split over homosexuality reached a fever pitch.

General Conference authorized the bishops in a 428-405 vote to form a commission to advise them on possible ways forward that foster unity.

The Council of Bishops executive committee later detailed “the mission, vision and scope” of the Commission on a Way Forward.

The goal, the bishops said, is to “design a way for being church that maximizes the presence of a United Methodist witness in as many places in the world as possible” and “that allows for as much contextual differentiation as possible.”

Harvey, the bishops’ president-designate, said that she and her colleagues have lived with that framework throughout this process. “It has had life beyond what I think we ever imagined,” she said.

“It has been a collaborative process between General Conference and the bishops,” Holland told United Methodist News Service. “In some ways, the vote is going to be a referendum on the bishops. Do we trust the bishops’ discernment?”

He is pastor of Trinity Community Church, a United Methodist congregation in Kansas City, Kansas. He has been blogging at urbanecclesiology.com about his experience at the meeting.

For his part, Holland said, he supports the one-church model. “There is no model that is unproblematic,” he said. But he said is not fearful of the debate moving to the local-church level.

“The argument that we are protecting our churches sounds as if our church members aren’t grownups and can’t talk about these things,” he said. “Our pastors have an opportunity to model dialogue in a healthy way. And I bet most churches do it better than General Conference. You love each other. You’ve been to each others’ weddings and funerals.”

“The council’s prayerful deliberation reflected the diversity of the global denomination on the matter of homosexuality and many other matters,” he said in the press release. “The council affirms the strength of this diversity and our commitment to maintain the unity of the church.”

Council of Bishops president said the church is watching as bishops finalize recommendations aimed at fending off church splits over homosexuality.
Bishops

Bishops themselves are choosing to emphasize different parts of their motion for a Way Forward. Advocacy groups are also making their thoughts known.
General Church