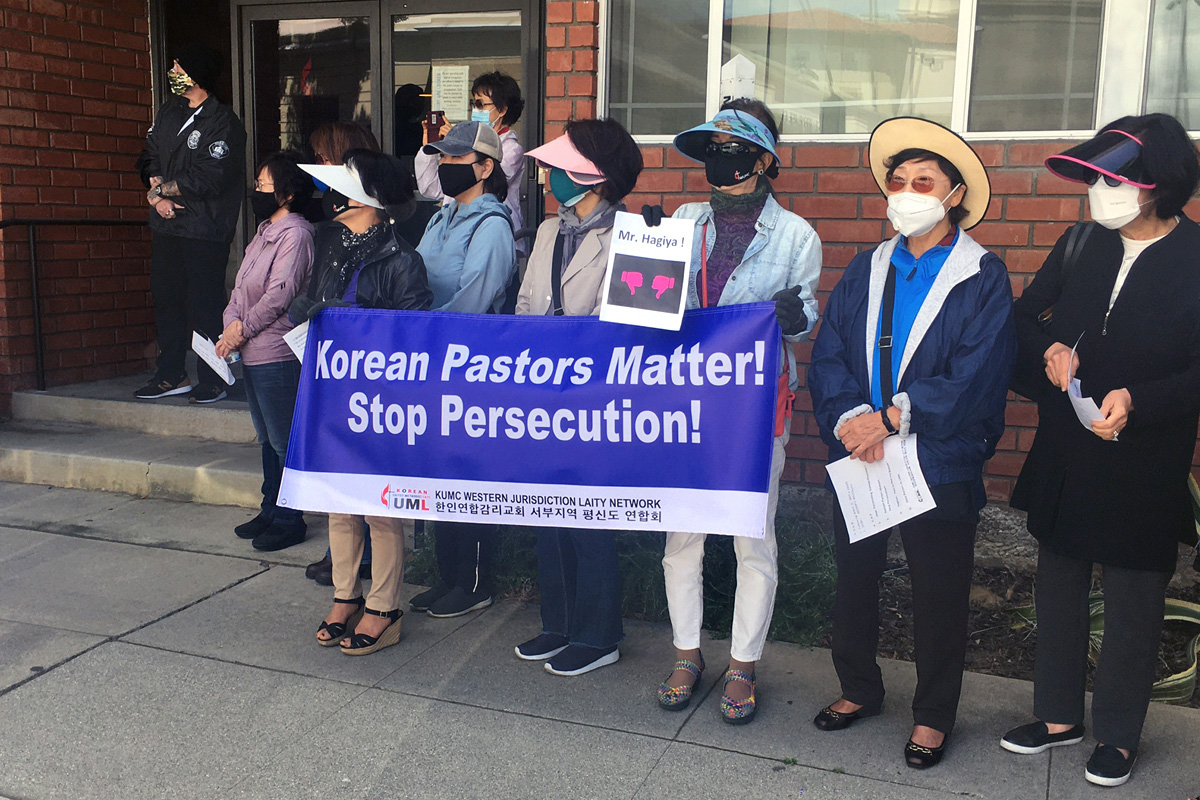 Korean American United Metho=dists and others stage a demonstration outside the California-Pacific Conference office in Pasadena, Calif., on May 21. The group was protesting Bishop Grant Hagiya’s decision to move three Korean American pastors from the churches they’ve been serving. Photo by Ted Smith III.

The Korean United Methodist Church Laity Network, Cal-Pac Korean Church Caucus and other groups accuse Hagiya of targeting the three pastors for their traditionalist beliefs and affiliations. They claim he failed to consult with the pastors and their churches in the appointment process.

But Hagiya insisted Book of Discipline directives on consultation were followed and denied he had any theological or political agenda in reassigning the pastors, whose tenures at their churches are to end June 30.

“I care and our cabinet cares deeply about every church,” Hagiya said by phone. “Our only perspective is about the welfare of the church.”

In The United Methodist Church, ordained elders agree to serve where assigned by their bishop. Hagiya is not the only U.S. bishop in the church to come under fire lately for appointments seen by critics as targeting traditionalists.

But protests against Hagiya — who is, like other Western Jurisdiction bishops, a progressive on LGBTQ inclusion — have grown and taken new forms. 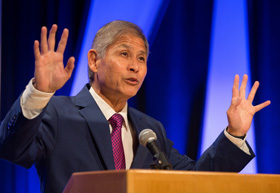 United Methodist Bishop Grant Hagiya welcomes participants to the 2016 Pre-General Conference Briefing in Portland, Ore. File photo by Mike DuBose, UM News.
A group of Korean American United Methodists and others came to the California-Pacific Conference headquarters in Pasadena, California, on May 21. The group demonstrated outside, carrying signs, singing hymns and listening to speakers calling for Hagiya to reverse his decision regarding the three pastors.

On May 16, about 30 people carrying protest signs gathered outside Christ United Methodist Church in Honolulu, Hawaii, as Hagiya participated in an ordination service.

A protest petition, circulated through social media, has gathered about 2,200 signatures. Emails shared with UM News suggest Hagiya and the district superintendents involved in the decision to move the pastors are now the subject of official complaints.

Rhetoric has been strong, with Stuart Ahn, president of the Korean United Methodist Clergy Network, writing that Hagiya’s actions toward the pastors amount to “unrighteous and blatant persecution against the Korean church.”

A press release from the Cal-Pac chapter of the Wesleyan Covenant Association, a traditionalist group within The United Methodist Church, accused the bishop of “racist bullying.”

Hagiya, a third-generation Japanese American, said that nearly two-thirds of the Cal-Pac cabinet is Asian American or Pacific Islander. He noted that Erin Hawkins, former top executive of the United Methodist Commission on Religion and Race, is the conference’s executive director of connectional ministries.

“She would be quick to point out if we are racist,” Hagiya said. “It just confounds us that they would go to that level of accusation. This has absolutely nothing to do with any kind of racial bias.”

The Rev. Kah-Jin Jeffrey Kuan, president of United Methodist Claremont School of Theology, said he could not address the appointments dispute, not knowing the facts. But he did vouch for Hagiya.

“I have known Bishop Hagiya for over 30 years now, and his commitment and passion for justice is incredibly strong,” Kuan said. “His character is impeccable, and I’ve always appreciated working with him, knowing the kind of leader he has been.”

The pastors in question have not been in the forefront of the protests, and for the most part have remained quiet about the controversy.

But Lew, of Valley Korean United Methodist, took issue with Hagiya’s account that the appointments were done with input from the pastors and churches.

“There wasn’t any consultation,” he said in a recent interview. “There was just notification.” 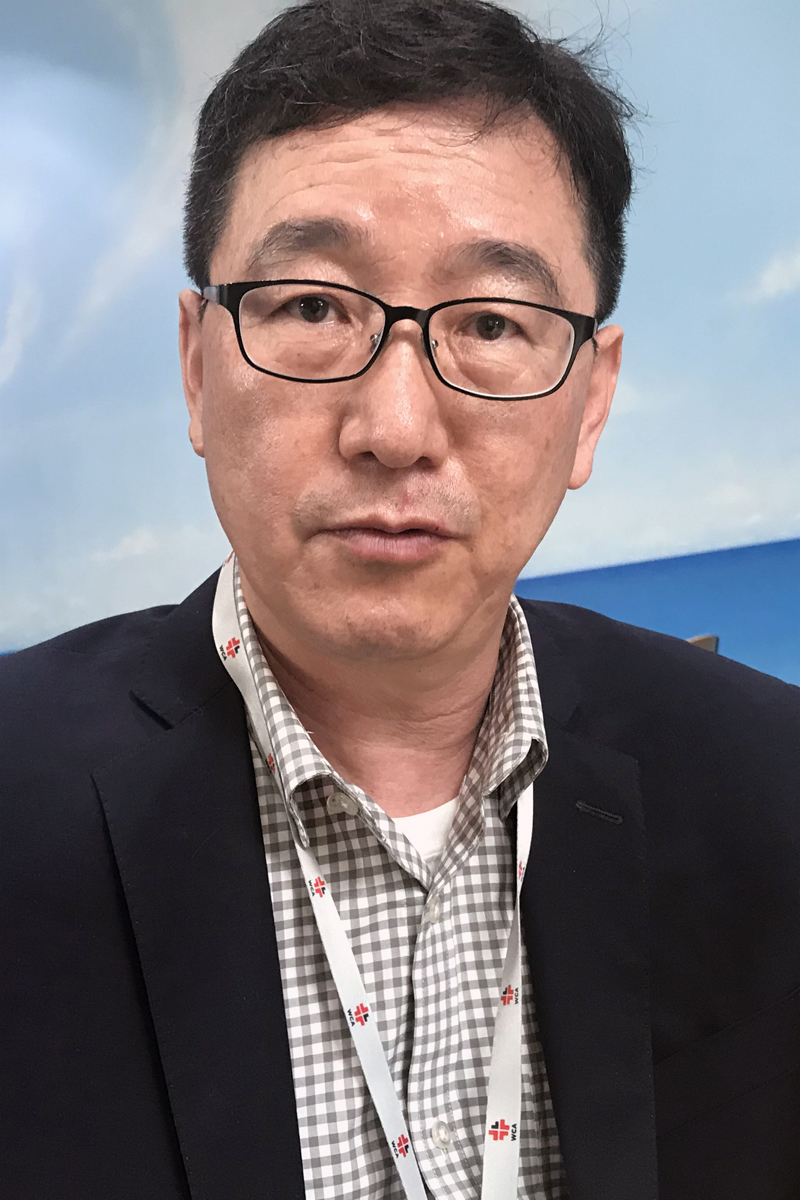 Lew has served as president of the Korean National Caucus of The United Methodist Church, and has attended meetings of traditionalists, including the recent Wesleyan Covenant Association gathering in Montgomery, Alabama.

He said he understood from a district superintendent that he was being moved from Valley Korean for seeking to persuade other Korean American pastors and churches to leave the denomination.

Lew said he merely shared information about the possibility of a denominational breakup. He added that he thinks Hagiya and other officials may have incorrectly assumed that in Korean culture an experienced pastor would have great sway over younger colleagues.

Asked about the reaction in his church at his reassignment, Lew said, “Korean pastors and my congregation take this as theological persecution.”

Exactly where Lew and the other two pastors will go is unclear. Lew said he has yet to be told of his new assignment. Hagiya said, “We do have appointments ready for them, but they are resisting meeting with us to go over them.”

The Cal-Pac fight occurs in a particularly challenging time for The United Methodist Church, as leaders across the theological spectrum have acknowledged.

The denomination has been divided for decades over how accepting to be of LGBTQ people. However, successive gatherings of General Conference, the denomination’s top lawmaking assembly, have affirmed restrictions on ordination and same-sex marriage.

Given the level of pain and protest that accompanied the 2019 General Conference — where those restrictions were strengthened in a 438 to 384 vote — a diverse group of church leaders negotiated the Protocol of Reconciliation and Grace Through Separation.

That plan would allow traditionalist churches to keep their properties and form a new denomination, with $25 million to get started.

But that proposal and others for the future of the denomination are on hold as the COVID-19 pandemic has twice postponed the next General Conference. It’s now scheduled for Aug. 29-Sept. 6, 2022, in Minneapolis.

The Wesleyan Covenant Association and other traditionalist groups are supporting the protocol, and have rolled out plans for the new denomination, to be called the Global Methodist Church.

Like Hagiya, Haupert-Johnson and Schol have strongly refuted such accusations.

“If you live life long enough, you have a moment when it all literally falls down,” writes the Rev. Dr. Tori Butler. She shares the time this happened to her and how she got back up.
Bishops

The Rev. Ruby-Nell M. Estrella, treasurer of the Philippines Central Conference, was the second bishop elected at the Nov. 24-26 meeting.