The group also unveiled on March 1 a logo and website. The work toward a new denomination is guided by a transitional leadership council, which includes some retired United Methodist bishops.

“The primary mission of the Global Methodist Church will be to make disciples of Jesus Christ who worship passionately, love extravagantly and witness boldly,” said the Rev. Keith Boyette, chair of the transitional leadership council.

But the official start and legal organization of the Global Methodist Church may well be more than a year and a half away.

Boyette and other leaders are counting on passage of the Protocol of Reconciliation and Grace Through Separation, a plan negotiated by centrist, progressive and traditionalist United Methodist leaders to end the denomination’s longstanding conflict over how accepting to be of homosexuality.

The protocol would let traditionalist churches and even annual conferences vote to leave and form another denomination, with $25 million to start. 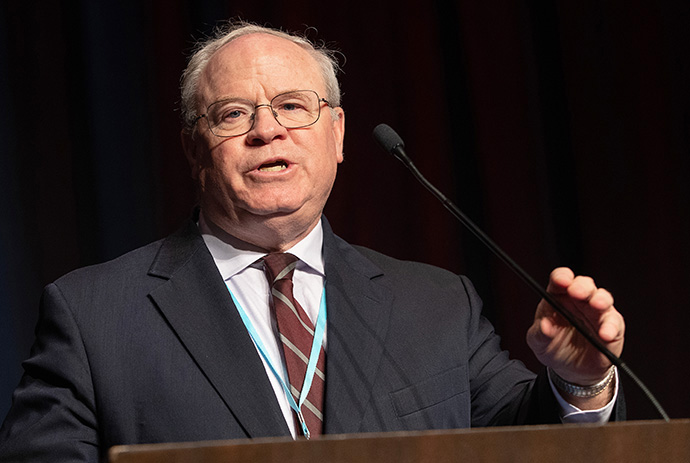 The Rev. Keith Boyette addresses the 2020 Pre-General Conference Briefing in Nashville, Tenn. Boyette is chair of the transitional leadership council for the Global Methodist Church, a planned denomination for traditionalists planning to separate from The United Methodist Church. File photo by Mike DuBose, UM News.

The 2020 General Conference was delayed for a year because of the COVID-19 pandemic and has been postponed again — until Aug. 29-Sept. 6, 2022 — because the public health emergency continues.

A special one-day, online General Conference has been called by the Council of Bishops for May 8, but it’s only to deal with 12 legislative items whose passage will help the denomination carry on administratively until a full General Conference can happen.

The protocol is not on the limited agenda for May 8.

“We’re proceeding according to plan, which is we would legally form and operationalize the Global Methodist Church upon adoption of the implementation legislation for the protocol,” Boyette said by phone.

He added that if, in the meantime, there’s erosion of support for the protocol among those who negotiated it, the Global Methodist Church will consider going ahead with an official launch.

Boyette said he has seen no such wavering. He noted that the Reconciling Ministries Network — which advocates for full inclusion of LGBTQ persons in The United Methodist Church, and whose executive director, Jan Lawrence, was on the protocol negotiating team — reiterated support for the protocol in a recent statement.

The new website of the denomination-in-progress includes a frequently asked questions section, a mission statement and the “Transitional Book of Doctrines and Discipline.”

The RMN statement also expressed support for the Christmas Covenant, a restructuring plan for The United Methodist Church that allows for more regional policymaking.

For decades, The United Methodist Church has faced conflict over same-sex weddings and the ordination of “self-avowed practicing” gay clergy. Church law bans both those practices, but there has been widespread defiance in churches and conferences in the U.S. and western Europe.

Traditionalists have long maintained that the denomination’s sexuality divide can’t be overcome.

The Wesleyan Covenant Association, led by Boyette, formed in 2016 and has been planning for a new denomination.

Boyette said the WCA will continue to exist even though the Global Methodist Church has a name, logo and transitional leadership council.

“I’ve often described (the WCA) as a midwife to bring to birth a new denomination. We will continue to pursue that objective,” Boyette said. “Our expectation is that once the Global Methodist Church is functioning and has its convening conference, the Wesleyan Covenant Association will have fulfilled its mission.”

The name “Global Methodist Church” is in the spirit of Methodism founder John Wesley’s statement “The world is my parish,” a press release said.

The logo brings together circles representing the Trinity, with the cross in the center.

“As a whole, the logo communicates God’s sending of the church into the world,” the press release said. “The sky blue color reminds us that even though Global Methodists live all around the world, they are united together in God’s great creation.” 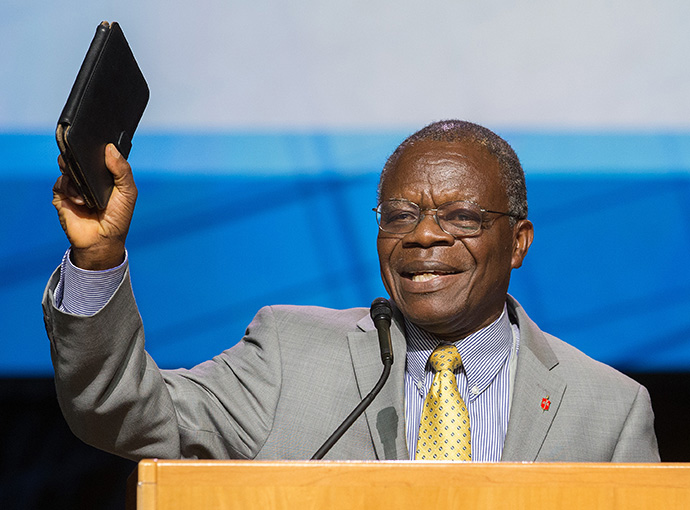 “I am convinced the Global Methodist Church will be a vibrant, vital expression of Methodism in terms of its teaching and ethics,” Hayes said in a press release.

“I believe the Global Methodist Church will fulfill the expectations and aspirations of local churches throughout Africa,” Adjobi said in materials provided by the traditionalist group.

Another group of traditional leaders met in Atlanta about a year ago to cast a vision for the new denomination, and the group recently met virtually, calling for passage of the protocol as soon as possible.

That group includes active bishops, but Boyette said he “can’t speak for them” as to whether they would leave The United Methodist Church for the Global Methodist Church.

Nor would Boyette estimate how many churches will be a part of the Global Methodist Church at its launch.

The group has a “Transitional Book of Doctrines and Discipline,” available in English, French, Korean, Portuguese and Spanish, but various organizational and operational details remain to be worked out.

“True to our roots, we’re a patient and methodical people,” Boyette said.

24th International AIDS Conference underscores the negative effect COVID-19 and monkeypox are having on efforts to curtail HIV.
Social Concerns

Ask The UMC responds to misinformation being spread about the policies of The United Methodist Church regarding human sexuality and whether they have changed or will soon be changed.