The Wesleyan Covenant Association met in person and online April 30-May 1, continuing to plan for a new, traditionalist Methodist denomination and passing a resolution criticizing three United Methodist bishops for recent appointment-making decisions.

Many at the WCA’s fifth Global Gathering were clearly excited at the prospect of leaving the big tent of The United Methodist Church for a denomination they say will stress evangelism, scriptural authority, historic Methodist practices and a traditional understanding of marriage as between one man and one woman.

But the meeting, held at Frazer Memorial United Methodist Church in Montgomery, also had an air of frustration. COVID-19 has pushed back to 2022 the United Methodist General Conference at which a proposed separation will be considered.

“I get discouraged at times,” the Rev. Keith Boyette, WCA president, said during his May 1 address. “But I’ve learned God does amazing work while we’re waiting.”

The WCA formed in 2016, and while strongly aligned with older traditionalist groups in The United Methodist Church, such as Good News and the Confessing Movement, it has become the incubator for a planned new denomination recently given the name Global Methodist Church.

Boyette joined a diverse group of church leaders in negotiating the Protocol of Reconciliation and Grace Through Separation, aimed at dealing with decades of division in The United Methodist Church over how accepting to be of homosexuality. Traditionalist churches would, under the proposal, be able to leave with their properties and form their own denomination, getting $25 million to start.

But the protocol was unveiled in January 2020, and General Conference has been rescheduled twice since then due to COVID-19, with the current dates set for Aug. 29-Sept. 6, 2022, in Minneapolis. 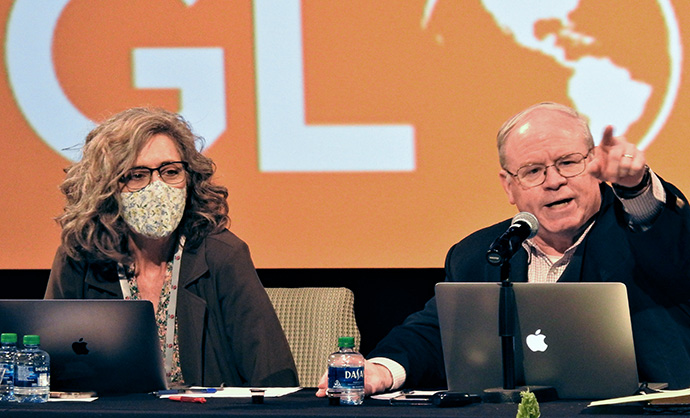 The Revs. Carolyn Moore and Keith Boyette oversee discussion at the Global Legislative Assembly of the Wesleyan Covenant Association. Photo by Sam Hodges, UM News.
“We’re all frustrated that the protocol has been delayed,” said the Rev. Richard Thompson, attending the WCA gathering from the First United Methodist Church in Bakersfield, California.

Amid sharply lower COVID-19 case numbers in the U.S., the WCA chose a hybrid approach for its latest meeting. On April 30, about 230 WCA Global Legislative Assembly delegates gathered in a hall at the Montgomery church, with others joining online. Mask wearing was strictly observed for those at the church.

The next day, the 2,100-seat sanctuary of Frazer Memorial was at least two-thirds full for the official Global Gathering, a daylong series of addresses interspersed with the singing of praise songs and hymns. Most wore masks, but many didn’t.

The WCA’s Global Legislative Assembly approved resolutions endorsing the protocol and the formation of the Global Methodist Church. Top WCA leaders had already signaled the organization’s backing of both.

“This demonstrated the broader support for what we did,” Boyette said of those resolutions.

Church leaders also have filed a complaint against Haupert-Johnson and a district superintendent for what they say was failure to consult on the appointment as required by the Book of Discipline, the denomination’s policy book.

Haupert-Johnson has offered a sharply different account from that of Ray and church leaders.

The resolution criticizes Schol for not reappointing the Rev. James Lee to Bethany United Methodist Church, a large Korean church in Wayne, N.J. Schol, in a statement, said he could not discuss specifics but characterized the interpretation of events by the WCA and other traditionalist groups as “absolutely false.”

As for Hagiya, the resolution faulted his decision to move three Korean pastors from their churches in the California-Pacific Conference.

Hagiya said he, too, is prevented by denomination policy from discussing the specifics of a particular appointment decision.

“However, we do not make any appointments out of punishment or retribution, and hold only the well-being of the church, community and pastor in the making of them,” he said.

Ray was at the WCA meeting, as was the Rev. Jae Duk Lew, one of the three California-Pacific Conference pastors. In separate interviews, both said they felt their bishops had not been fair. 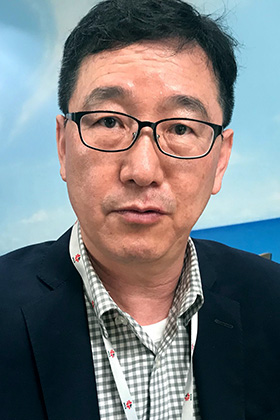 The Rev. Jae Duk Lew
Photo by Sam Hodges, UM News.
“There was not any consultation. There was just notification,” Lew said of his case.

Some Global Legislative Assembly delegates wanted to soften “condemns” in the resolution. But their amendments failed after Ted Smith III, a layman from the California-Pacific Conference and WCA Council member, described Hagiya’s actions as a “gut punch” to traditionalists.

Most of the Global Legislative Assembly time went to considering and approving task force reports that amount to recommendations for the planned Global Methodist Church.

There was discussion of linking church membership to participation in “accountable discipleship small groups,” a hearkening back to the early Methodist practices of holding band meetings and class meetings.

The Rev. David Watson, a professor and administrator at United Theological Seminary, said the new denomination should ground itself in early Methodist practices.

“I don’t want to be a MINO — Methodist in name only,” Watson said. “The danger that faces the Global Methodist Church is not that we will become progressives. … The danger is that we will lapse into a kind of general American evangelicalism.”

But Eddie Nabors, a layman from Batesville, Mississippi, questioned the idea that early Methodist practices had to be deployed. He stood up for Sunday school, a more recent approach to Christian formation.

“I’m a 35-year Sunday school teacher, and we do it right,” Nabors said.

The Rev. Bob Kaylor, of the WCA’s accountable discipleship task force, tried to reassure Nabors that Sunday school would not be done away with by the Global Methodist Church.

“If you like your plan, you can keep your plan,” he said, drawing laughs for echoing rhetoric from past U.S. health insurance debates.

The Rev. Lisa Beavers, attending from the Oklahoma Conference, said the work in Montgomery was useful overall in defining what the new denomination will be like.

“The vision is getting clearer as to what God is calling us to do,” she said.

The Global Gathering carried the theme “Go Global!” and speakers urged a Great Commission emphasis on evangelizing across the world. Recorded messages came from United Methodist Bishop Eduard Khegay, of the Eurasia Episcopal Area, and the Rev. Jonathan Razon, in the Philippines.

Speaking in person, the Rev. Timothy Tennent, president of Asbury Theological Seminary, called for a goal of starting 10,000 churches and converting one million people to Christian faith.

Tennent also urged traditionalists to remain peaceful and loving in the midst of denominational conflict. 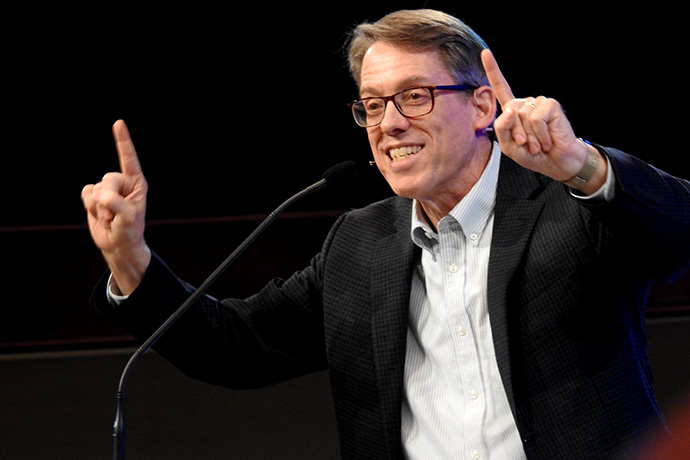 The Rev. Timothy Tennent, president of Asbury Theological Seminary, addresses the Wesleyan Covenant Association’s fifth Global Gathering. Photo by Sam Hodges, UM News.
“You cannot build a new church on a foundation of anger, no matter how well placed it may be at times,” he said.

But the Rev. Eric Huffman struck a chord in addressing traditionalists’ view that they are unfairly targeted as causing harm by supporting current United Methodist bans on same-sex weddings and ordination of “self-avowed practicing” gay clergy.

“Infinitely more harm is caused by spineless and sentimental church leaders who misrepresent the truth because they like being liked by people more than they like people loving Jesus,” he said, drawing rousing applause.

Three United Methodist annual conferences, including one in Africa, have asked the denomination’s highest court to rule on the ramifications of General Conference’s third postponement since the onset of COVID. The Judicial Council also faces more questions about church disaffiliations.
Social Concerns

The United Methodist Church supports workers' rights in a heritage that goes back to early Methodism in England.
General Agencies