Delegates joined hands and sang “Blest Be the Tie That Binds,” overwhelmingly agreeing to stay together after a tumultuous 10 days of debates and demonstrations at the 2004 United Methodist General Conference.

Unity was the word at the end of the denomination’s top lawmaking assembly in Pittsburgh, Pennsylvania. But all the talk before the 2020 General Conference in Minneapolis May 5-15 is about dividing up the church.

Delegates will look at several proposals that split the church along traditional, progressive and centrist lines, with differing policies on LGBTQ clergy and same-sex marriage.

United Methodists are talking about a split after the special 2019 General Conference did not resolve the church’s long-simmering debate over homosexuality. Delegates, by a 53% vote, adopted the Traditional Plan that strengthened LGBTQ restrictions, but that plan has faced increasing resistance in many parts of the church in the United States and western Europe.

What does it mean for local churches if the denomination separates after May 2020?

Under any of the plans before the assembly, local churches would need to vote only if they disagree with the alignment chosen by their annual conference. So, if a conference chooses to leave The United Methodist Church and a local church wants to stay, that church would have to vote.

Three of the plans — the Protocol of Reconciliation & Grace Through Separation; New Denominations of United Methodism (Indianapolis Plan); and Next Generation UMC (UMCNEXT Plan) — all have similar procedures for local churches, although the plans vary on details, such as whether a simple majority or two-thirds majority is required for a church to leave. Developers of the New Denominations and Next Generation have said they now support the protocol.

New Expressions Worldwide (UM Forward) dissolves The United Methodist Church and forms four new global denominations, then sets up a Transitional Council that would draft the details of separation. But again, local churches would have to vote only if they want to choose a different denomination from their annual conference. 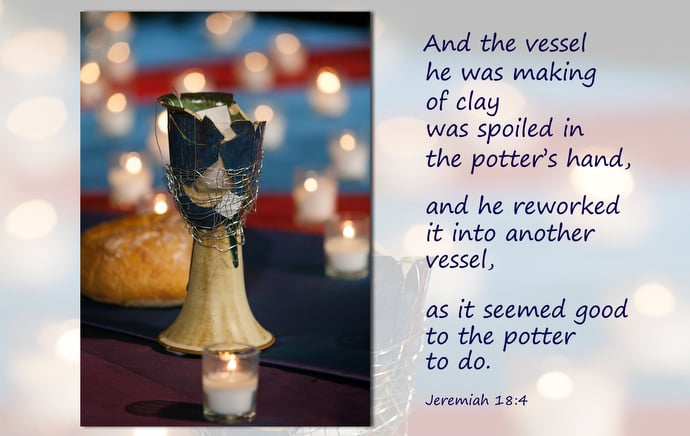 A communion chalice, broken in protest of The United Methodist Church's stance on homosexuality, was mended and returned to the altar as a symbol of healing for closing worship at the 2004 United Methodist General Conference in Pittsburgh. Graphic by Laurens Glass; File photo by Mike DuBose, UM News.
Howell describes his church as a big-tent United Methodist church that has people from all sides of the issue worshipping together. Howell had initially thought his church wouldn’t need to take a vote if the protocol passed.

“I’ve said to our people, the beauty of it is we don’t have to choose,” he said. However, if the conference decides to go with the traditionalist denomination, Howell said his church would vote on leaving the conference.

Some U.S. churches have already spelled out their plans.

“Oak Hill United Methodist Church believes the passage of the Traditional Plan caused harm to a part of our community whose only desire is to worship God. … [W]e affirm that all people are beloved children of God,” the church said in a Feb. 18 press release.

Margie Briggs, lay minister of two small rural congregations in Missouri, said her churches are dedicated to continuing to serve the community.

“We have never asked for any information from community folks or guests,” she said. “We welcome them as children of God, and they are going to continue to do the same thing after General Conference.”

If General Conference approves the protocol, U.S. local churches that want to realign can begin voting by late summer of this year. They don’t have to wait for the annual conference to vote, although a church might avoid a vote by waiting to see what the annual conference does. If the conference aligns with the Methodist denomination that the church wants, no vote would be needed.

What does the church do to call a vote?

Under the protocol, the church council would decide whether to call for a vote and then make that request to the district superintendent. The superintendent would be required to call such a meeting within 60 days of the request. Then the decision would be made by a vote of all professing members who are at the meeting.

Church leadership will decide if a simple majority or two-thirds vote is needed. The local church may choose a different denomination than that of its annual conference and retain property, assets and liabilities. If a local church votes to align with a new denomination, it must maintain connectional responsibilities until separation — continue to pay apportionments, pension, health benefits and other costs.

Under the New Denominations plan, local churches that disagree with their annual conference’s alignment may — by a simple majority vote of professing members present at a regular or called charge or church conference — choose to align differently. Or a church can join with 50 or more other local churches in forming another denomination of Methodism. Churches not taking a vote remain in their annual conference under whatever alignment the conference has chosen.

Next Generation UMC states that if the council of a local church determines that if a church wishes to consider ending its relationship with The United Methodist Church, the council should submit a request to the district superintendent. Within 30 days after receiving the request, the superintendent must call for a church conference. 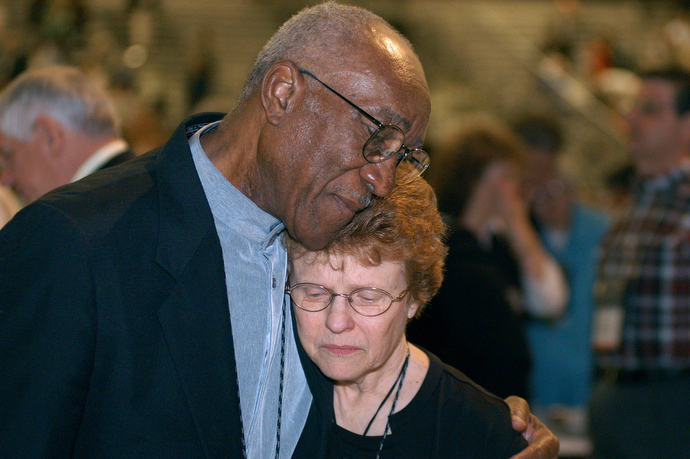 Delegates Burnham A. Robinson (left) and Judith A. Sands embrace following a vote affirming unity in the United Methodist Church at the close of the denomination's 2004 General Conference in Pittsburgh. Talk before the upcoming 2020 General Conference in Minneapolis is about dividing the church. File photo by John C. Goodwin, UM News.
The decision to end the local church’s relationship with The United Methodist Church must be approved by a two-thirds majority vote of the professing members of the local church present and voting at the church conference. The local church retains its property and cannot be required to pay more than 12 months of apportionments.

New Expressions Worldwide sets up traditionalist, moderate, progressive and liberation Methodist churches. If this plan is passed, a separation plan would be presented to a special General Conference occurring before 2024.

Under this plan, local churches disagreeing with their annual conference’s decision could decide by a two-thirds majority vote of a church conference to align with a different denomination. All local church assets and liabilities would be retained by that local church.

Next Generation UMC, New Expressions Worldwide and New Denominations would have local churches in Africa, Europe and the Philippines follow the same procedures as U.S. churches if they disagree with the choice of their annual conference.

The 2019 General Conference added a new paragraph to the denomination’s lawbook on “Disaffiliation of Local Churches Over Issues Related to Human Sexuality.” The legislation allows congregations, with limitations, to leave the denomination while keeping church property.

Some churches have already left the denomination under that legislation, even though the legislation will be reviewed by the Judicial Council, the denomination’s top court, at its April 29-May 2 meeting. The Council of Bishops asked the court to determine if questions about improper voting invalidated that petition.

The bottom line is no one wants to be the quitter, Howell said.

“It feels like failure, breaking up with some people I love and wanted to be in church with,” Howell said.

Gilbert is a multimedia news reporter for UM News. Contact her at (615) 742-5470 or [email protected]. To read more United Methodist news, subscribe to the free Daily or Weekly Digests.