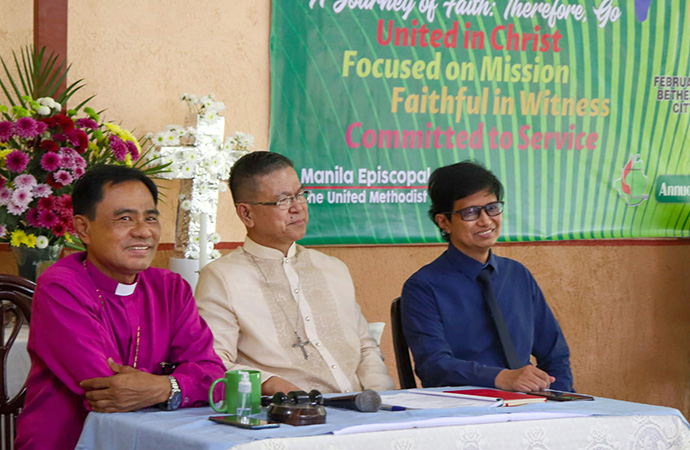 The Philippines Annual Conference Cavite has endorsed and sent to the 2020 General Conference legislation for an amicable separation of The United Methodist Church — the Protocol of Reconciliation & Grace Through Separation.

The annual conference, meeting in regular session Feb. 12-14 in Tagaytay City, Philippines, also endorsed and forwarded the Christmas Covenant, another potentially key piece of legislation for the future of The United Methodist Church.

Both proposals were developed after the official petition deadline for the denomination’s top lawmaking assembly, scheduled May 5-15 in Minneapolis.

However, a little-used part of the Book of Discipline — the denomination’s policy book — lets annual conferences submit legislation later if they meet between 230 and 45 days before General Conference.

Other annual conferences are due to take up the protocol, but PAC Cavite, as the conference is known, appears to be the first to endorse it and send it on to General Conference.

“We are making history,” said the Rev. Elmer Z. Borromeo, a district superintendent in PAC Cavite.

The protocol is the work of a 16-member team of church leaders, representing progressive, centrist and traditionalist parts of the denomination.

The team agreed that longstanding divisions over same-sex weddings and ordination of LGBTQ people as clergy were tearing apart The United Methodist Church, requiring a separation.

The protocol would allow traditionalist churches — those who oppose same-sex weddings and ordination of noncelibate LGBTQ people as clergy — to leave with their properties. The new group would also get $25 million in United Methodist funds.

The Christmas Covenant was proposed by central conference leaders, primarily in the Philippines. It’s a plea for keeping the denomination intact and as unified as possible, but also calls for restructuring it into regional conferences, including a U.S. regional conference.

Regions would be allowed to adapt the Book of Discipline to their contexts, with the hope that differences over doctrine and social issues could be reduced.

“I believe that the Christmas Covenant and the protocol complement each other, and I am glad that both are endorsed by PAC Cavite,” said Bishop Rodolfo A. “Rudy” Juan.

PAC Cavite is in the Manila Area, but Juan said he got permission to bring the protocol to that annual conference from Manila Area Bishop Ciriaco Q. Francisco.

Francisco said the protocol “gives a graceful exit to the traditionalists who are leaving the church, no matter what happens in 2020, to form a new Methodist denomination."

He added that approving the regional conference approach would mean equality between the U.S. and central conferences, while allowing for a regional context in mission and the chance to make a supplementary Book of Discipline.

Juan said he expects the Mindanao Philippines Conference will discuss and approve the protocol in a March 18 session.

“At a time when the worldwide denomination is at a crossroad, we need the protocol as a way forward,” Juan said.

The Rev. Mark Holland, executive director of the advocacy group Mainstream UMC, traveled to the PAC Cavite session and spoke for the protocol.

“It keeps us out of court and keeps The United Methodist Church intact,” he said.

The Michigan Conference is to meet in special session March 7, to consider sending the protocol to General Conference.

Michigan Conference Bishop David Bard has said his goal is to help get the legislation to General Conference, not to have his conference consider whether to endorse it.

The Sierra Leone Conference, overseen by Bishop John Yambasu, will take up the protocol during a regularly scheduled gathering March 4-8. Yambasu organized talks last summer that led to the protocol team’s formation.

Borromeo said PAC Cavite’s vote for endorsing and sending on the Christmas Covenant was unanimous.

The Rev. Igmedio Domingo, superintendent of the Southwest Manila District, attended the PAC Cavite meeting and described the protocol vote as nearly unanimous.

The protocol has been endorsed by the governing boards of advocacy groups from traditionalist, centrist and progressive perspectives.

Mangiduyos is a United Methodist communicator in the Philippines and Hodges is a Dallas-based writer for United Methodist News. Heather Hahn of UM News contributed. Contact them at (615) 742-5470 or [email protected]. To read more United Methodist news, subscribe to the free Daily or Weekly Digests.

Defiance of rules passed by General Conference goes back to the earliest days of the first Methodist denomination in the U.S. A United Methodist professor writes about why the current debate over homosexuality is driving a church separation.
Annual Conferences

In Part 8 of its series, the Ask The UMC team tackles more inquiries related to Paragraph 2553, including what happens when the paragraph expires at the end of the year.
Violence