The future of The United Methodist Church has lately been the subject of a flurry of statements and opinion pieces coming from groups and individuals in Africa, Europe and the U.S.

An example: Three European bishops weighed in this week saying that some split appears inevitable, with the post-separation United Methodist Church likely to change its official policies regarding human sexuality. The current policies include bans on same-sex weddings and ordination of LGBTQ persons as clergy.

The bishops wanted to make clear that they will do everything they can to make sure traditionalists still feel welcome in the denomination. 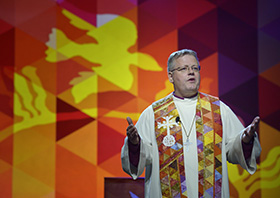 Bishop Christian Alsted preaches during the 2016 United Methodist General Conference in Portland, Ore. Alsted joined two fellow European bishops in issuing a recent statement. They pledged that theological traditionalists would have a place in a “Future United Methodist Church,” should the denomination split. File photo by Paul Jeffrey, UM News.

“We are committed to The United Methodist Church and we pledge to continue our episcopal leadership in the UMC valuing the personal dedication of members and clergy who will remain in agreement with the present stance on the practice of homosexuality,” the statement said.

Decades of conflict over LGBTQ inclusion culminated in the contentious, painful 2019 special General Conference in St. Louis and led a diverse group of church leaders to put forward the Protocol of Reconciliation and Grace Through Separation in January 2020.

That proposal, hammered out with the help of famed mediator Kenneth Feinberg, would let traditionalist-minded churches keep their properties and form a new denomination, with $25 million to start. Other legislative options for a breakup or major restructuring have been put forward as well.

But General Conference, the church’s top law-making assembly, could not meet as planned in May 2020 because of the COVID-19 pandemic. So all legislative proposals have been on hold.

Indeed, for months there was more talk about pandemic-related safety protocols for local churches than about the Protocol of Reconciliation and Grace Through Separation.

The pandemic continues and the Commission on the General Conference is expected to announce soon whether the meeting rescheduled for Aug. 29-Sept. 7 this year in Minneapolis can happen in person or even virtually.

Meanwhile, statements and opinion pieces on the denomination’s future have begun to pile up.

The three European bishops described The United Methodist Church as at a “defining moment.”

“Expecting the polity of The United Methodist Church to change in the future, we will exercise our leadership in such a way that those who choose to remain in the UMC may continue to express their personal conviction in alignment with the present stance (on homosexuality) and will not be forced to participate in acts that are against their personal religious convictions,” Bishops Alsted, Rückert and Streiff wrote.

Alsted, bishop of the Nordic and Baltic Area, addressed the statement’s timing by email.

Alsted said he and his colleagues, after prayer, discernment and studying the current situation, wrote to counter that view.

But a group of 10 African clergy and laity — some of them General Conference delegates — earlier this month published a statement rejecting the idea of a split.

“We do not see any evidence of prayer and the leading of the Holy Spirit in any dissolution plans,” the group said on the Africa Voice of Unity website. “Our (non-U.S.) central conferences have not been part of any conversations related to these proposals. Therefore, we reject any plan that calls for the dissolution or dismemberment of The United Methodist Church.”

The group offered support for the Christmas Covenant and other proposals to restructure the denomination and provide regional bodies with more flexibility to adapt church law and decide how to minister in their own context.

That unity statement was countered by some United Methodist leaders in Nigeria, who emphasized their own traditionalist beliefs and offered strong support for the Protocol, albeit amended to allow more regionalization in church polity. They addressed their statement to United Methodist bishops in Africa. 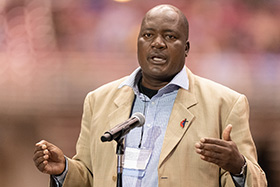 The Rev. Forbes Matonga of the West Zimbabwe Conference addresses the 2019 United Methodist General Conference in St. Louis. Matonga, writing from a traditionalist theological perspective, is among those who lately have been weighing in on the future of The United Methodist Church. File photo by Mike DuBose, UM News.

The Rev. Forbes Matonga, of the Zimbabwe West conference, wrote a three-part essay on the decisions facing him and fellow African delegates to General Conference.

Matonga has been part of the traditionalist Africa Initiative group but said by email that the essay reflected his personal views.

He favors the Protocol, though with amendments. For Matonga, the divide over homosexuality is too large to bridge.

“We as United Methodists are unable to resolve this controversy that has haunted our denomination for the past 40 years now,” he wrote in his essay. “This is the context in which the Protocol of Reconciliation and Grace Through Separation must be understood. It is both an admission and realization that the two theological camps cannot resolve their differences.”

About a year ago, a group of traditionalist leaders, including a handful of active bishops, released a statement supporting the Protocol and sharing their vision for a “new traditional expression of Methodism.”

“Our local churches, annual conferences and the church’s general boards and agencies can no longer remain in a state of uncertainty and unrest where there is no clear guidance or official direction for the future,” said the coalition, which has representatives from the traditionalist groups Good News, Wesleyan Covenant Association, Confessing Movement and Institute for Religion and Democracy.

A recent column by the Rev. Thomas Lambrecht, vice president and general manager of Good News, laid out reasons for separation. That prompted a response from the Rev. Adam Hamilton, senior pastor of the United Methodist Church of the Resurrection in Leawood, Kansas.

Lambrecht then offered a rejoinder to Hamilton, a centrist in the church theological landscape.

Quite separate from this back and forth, an international group of General Conference delegates unveiled a 10-page document titled “Out of Chaos, Creation: Imagining a Better Way of Being United Methodists.”

“We are committed to being the Church together, despite our differences (Ephesians 4:4),” the group said. “We each have a place at God’s table.”

The Commission on the General Conference and Council of Bishops both held closed-door meetings last week. That suggests a definitive decision could soon be announced about whether there can be a 2021 General Conference.

Whatever the call, there’s sure to follow another round of commentary about the future of The United Methodist Church.

Bishop Gary Mueller offers six principles for the denomination to remain united and show the world the difference that Jesus makes.
General Church

To the Confessing Movement, with gratitude

The focus of Advent is preparing for the return of Christ at the culmination of all things.