A rally for the One Church Plan drew a crowd that overflowed its hotel venue, the night before General Conference delegates were set to begin their legislative work.

Amid the buzzing throng, the Rev. Tom Berlin — who submitted the plan on behalf of the Commission on a Way Forward — called for calm and care.

“We do not need you to fire up on Twitter and use every four-letter word you know. In fact, that’s the most unhelpful thing you can do because we have to bring a lot of votes from people who are right on the edge.”

Berlin and other speakers at the rally repeatedly emphasized the importance of relationship building across geographical and theological lines — not only to win over votes but also to keep the church in ministry together.

The unofficial advocacy group Uniting Methodists held the event in the Park View Room at the Hyatt Regency St. Louis at the Arch, which the hotel says has space for 370 guests. A lively crowd of dozens more flowed out into the surrounding hallways.

Many wore red buttons proclaiming support for the One Church Plan.

The legislation, which a majority of bishops recommend, would leave decisions to hold same-gender weddings up to clergy and congregations — and gay ordination up to annual conferences.

The plan adds protections for clergy and bishops who as a matter of conscience cannot officiate at such unions or ordinations. The plan also lets central conferences — church regions in Africa, Europe and the Philippines — maintain current prohibitions.

The international crowd at the rally heard from supporters who sought to answer these concerns.

The Rev. Stan Copeland, the senior pastor of Lovers Lane United Methodist Church in Dallas, spoke about leading a congregation with a sizable number of LGBTQ members and immigrants from Zimbabwe.

“The bottom line is here: I believe we can handle these matters best in the local church,” he said. “We can work through this because we know each other, we love each other, we trust each other more.” 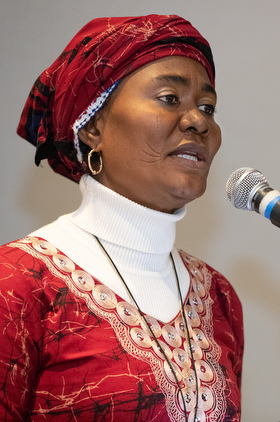 The Rev. Eunice Iliya, a hospital chaplain and General Conference delegate from Nigeria, speaks during a rally for the One Church Plan held Feb. 23 at the Hyatt Regency St. Louis at the Arch. Photo by Mike DuBose, UMNS.

The Rev. Eunice Iliya, a hospital chaplain and General Conference delegate from Nigeria, opened her testimony by quoting Romans 12:16 — “Live in harmony with one another. Do not be proud, but be willing to associate with people of low position. Do not be conceited.”

She said she supports the One Church Plan because The United Methodist Church has done much in her life. She said she also has made many LGBTQ friends, including a gay physician who provides health care in Nigerian villages.

She said her late father “would never be happy” to see his clergy daughter be part of those who would divide the denomination.

Bill Brownson, the openly gay chief financial officer of the West Ohio Conference and General Conference delegate, echoed that sentiment. He said he has worked over the years with United Methodists who do not think like him.

In addition to his conference work, he also serves on the board of the General Council on Finance and Administration, a group with varied biblical interpretations and views of ministry.

“Together, we are better at taking on the things that need to be taken on,” he said. “To not have that opportunity would be a huge miss for The United Methodist Church. It would be a miss for me personally.”

Earlier in the day, Uniting Methodists held a lunch for General Conference delegates where organizers said the attendance exceeded the 225 boxed lunches ordered for the gathering.

Not everyone at the nighttime rally came to support the One Church Plan. The Rev. Paul Stallsworth, a supporter of the Traditional Plan, came to be able to report for the newsletter of the unofficial advocacy group Lifewatch.

“This is kind of a spiritual discipline,” Stallsworth said. “To come to these conferences, we have to get out of our comfort zone.”

A number of the One Church Plan supporters also were getting out of their comfort zones.

Jim Nibbelink, delegate from the Desert Southwest Conference, said political realities mean the One Church Plan is more likely to pass than what he considers the inclusive ideal. But like so many at the event, he spoke of the importance of maintaining lifesaving ministries United Methodists do together, especially combatting malaria.

Lynne Gilbert, a delegate from the Western North Carolina Conference, said she too wants the church to remain united.

“I also want to change the language that does harm to brothers and sisters among us.”