A top hospital in Seoul, Korea — founded by a missionary doctor — has donated 10,000 face masks to the United Methodist Board of Global Ministries for distribution to retired Methodist missionaries.

Yonsei University and Severance Hospital, a prestigious university and hospital, was founded on April 10, 1885, by a Methodist medical doctor, Horace Newton Allen, and a Presbyterian missionary, Horace Grant Underwood. This was the first modern and westernized hospital in Korea.

“During the days when our country didn't even have a concept of hygiene, missionaries built our hospitals to offer medicine,” said Dr. Do-Heum Yoon, president and CEO, Yonsei University Health System. "We can't repay the love with this shipment of masks, but we still remember the love of missionaries.”

The KF94 masks from Severance Hospital arrived at the mission agency’s Atlanta headquarters on July 7 and staff were working to distribute them in late July and August to retired Methodist missionaries living in the United States and worldwide.

"This very generous gift from the people of South Korea is a moving testimony to their heartfelt love for those who have served The United Methodist Church over the years in roles such as evangelists, church planters, doctors, nurses, social workers, and teachers,” said Thomas Kemper, top executive for Global Ministries, in a press release.

The gift arrived during the 70th anniversary of the start of the Korean War and the mission agency noted that it has been actively working with other faith communities and partners worldwide toward a formal peace treaty. Global Ministries hosted a roundtable for peace on the Korean Peninsula in Atlanta in 2018. 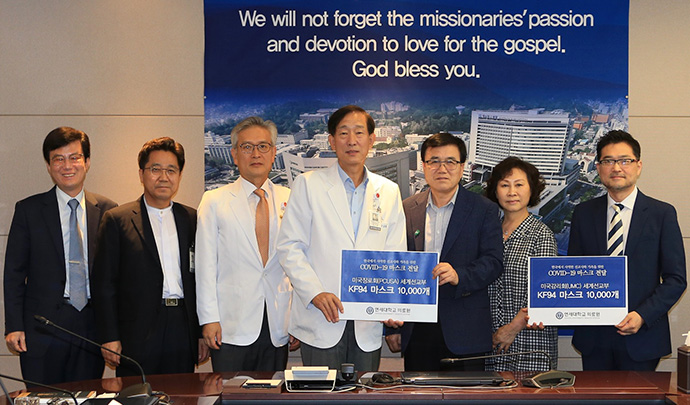 Dr. Do-Heum Yoon, president and CEO, Yonsei University Health System (center) spoke about the donation. “We can't repay the love with this shipment of masks, but we still remember the love of missionaries,” he said. Photo courtesy of Severance Hospital of Yonsei University.
Though a ceasefire of the Korean War was issued in July 1953, the war is technically still not over: It remains under the armistice agreement signed that same year.

Churches and Christians throughout the world are using various programs and events during the 70th anniversary to take action to find peace and reconciliation on the Korean Peninsula and finally end the Korean War. One such effort is a 70-day-prayer campaign, called “We Pray, Peace Now, End the War!” which continues through Aug. 15.

Grace Choi is a missionary in residence at Global Ministries and a Yonsei alumnus. She worked at Severance Hospital before she went to the Philippines as a missionary.

“I want to express my personal thanks for the gift of 10,000 masks with the heart of gratitude to the missionaries. It is so grateful to receive the gifts of masks from Korea where missionaries’ sacrifices and toils bore fruits.”

The United Methodist Church has 1,200 retired missionaries, including 90 who served Korea, Choi said. “They will get the masks first, and we will also continue to distribute the others.”

Barbara Pak is one of those retired missionaries who served in Korea. “I am especially interested in receiving the masks being given by Yonsei University,” she said. “Please give my thanks and appreciation to the persons there for their thoughtfulness.

“Having served in Korea, I have known of the generosity and kindness of Korean people. Greetings to those now serving in Korea and those working in the Asia office and to the folks at Yonsei.”

“I was deeply moved by Severance Hospital, which sent 10,000 masks with their love and care for missionaries,” he said. “I understand this action as an encouraging message of love to continue to take charge of the world mission for the kindom of God. I feel strongly the truth that we are connected as the body of Jesus Christ in sharing the Good News and in practicing the teaching of the Lord.” 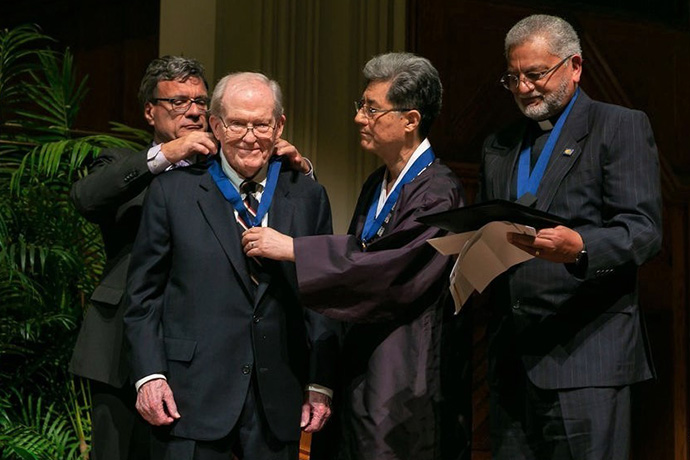 On November 21, 2019, at the 2019 World Methodist Peace Award Ceremony held at Grace United Methodist Church in Atlanta, Thomas Kemper, General Secretary of the Global Ministries (left) conferred the 2019 World Methodist Peace Award Medal to the Rev. James Laney. The Rev. Jong-Chun Park, president of the World Methodist Council and one of Laney’s students, assists. Ivan Abrahams (right), General Secretary of the World Methodist Council stands by. Photo courtesy of Cindy Brown, Global Ministries.
The Rev. James T. Laney and his wife Berta are among the retired Methodist missionaries who served Korea and the Korean people. Laney is a former United States ambassador to South Korea and president emeritus of Emory University.

In 1959, Laney and his wife were commissioned to South Korea, which was totally devastated by the Korean War. They taught at Yonsei University, and quite a few of Laney’s students became leaders of South Korea.

Almost 30 years after he finished his missionary work in South Korea, Laney was appointed as the U.S. ambassador to South Korea by President Bill Clinton in 1993. He persuaded Clinton to send former President Jimmy Carter to North Korea as a special envoy. He was one of the key persons involved in helping alleviate the North Korea nuclear crisis in 1994.

On Nov. 21, 2019, the World Methodist Council recognized his outstanding service and work to wage peace on the Korean Peninsula with the 2019 World Methodist Peace Award.

This year, on June 20, the government of the Republic of Korea recognized the Rev. George Ogle, another retired missionary, with the People’s Medal for his contribution toward Korean human rights and democracy.

Ogle was a commissioned Methodist missionary to South Korea in 1954 and started a well-known Urban Ministry Mission, which focused on Korean workers’ rights and educating workers about the Workers’ Law. While he was teaching at Seoul University, Ogle advocated for students and activists sentenced to the death penalty and was expelled from South Korea on Dec. 14, 1974.

Kim is director of Korean and Asian news of United Methodist News in Nashville. Contact him at 615-742-5470 or [email protected]. To read more United Methodist news, subscribe to the free Daily or Weekly Digests.