Just ahead of Americans heading to the polls for Election Day, United Methodist delegates will be heading to five simultaneous jurisdictional conferences across the U.S. to elect new bishops.

But unlike during previous bishop elections, jurisdictional leaders are recommending that the delegates gathering Nov. 2-5 not fill every vacant episcopal office.

All told, 20 United Methodist bishops in the U.S. will have retired between 2021 and the end of this year. However, at this point, the recommendation is to elect 14 new bishops.

The elections will bring the number of active U.S. bishops up to 40, but the U.S. currently has 46 episcopal areas.

It will be up to each jurisdiction’s college of bishops and committee on the episcopacy to arrange coverage of the remaining episcopal areas either by asking retired bishops to serve in an interim capacity or assigning bishops to serve more than one episcopal area as 16 bishops have done over the past two pandemic-marred years. All active bishops are eligible for reassignment at jurisdictional conferences.

All jurisdictions also will have to vote on the number of bishops to elect when they meet next month. 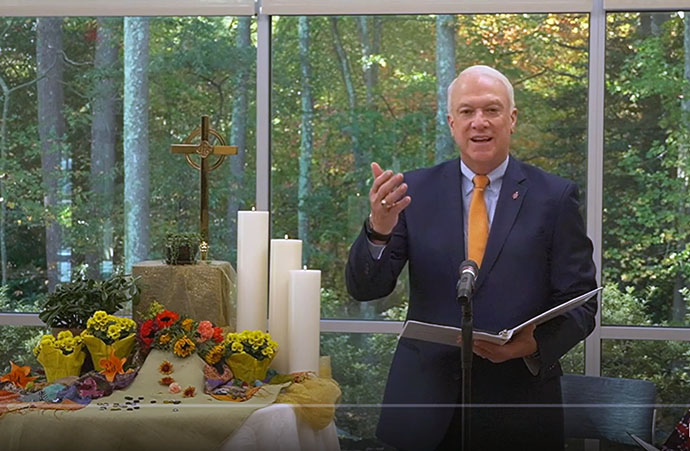 New York Conference Bishop Thomas Bickerton, Council of Bishops president, opens the special session of the Northeastern Jurisdictional Conference on Oct. 15. The jurisdictional conference met online to decide how many new bishops to elect when it and the four other jurisdictions hold bishop elections across the U.S., starting Nov. 2. Screengrab courtesy of the Greater New Jersey Conference via YouTube by UM News.

Current recommendations are to elect:

Jurisdictional leaders are cautioning delegates to consider the long-term financial sustainability of adding more bishops as The United Methodist Church grapples with the ongoing effects of the COVID-19 pandemic and mounting church disaffiliations.

At the same time, many United Methodists have expressed a desire for fresh leadership to help take on the challenges the denomination faces.

That tension was on display when the Northeastern Jurisdiction held a special session online Oct. 15 to determine how many bishops to elect next month.

The jurisdiction saw a rare instance when its committee on the episcopacy, which typically proposes the number of bishops to elect, and its college of bishops had different recommendations.

The jurisdiction’s bishops urged that no new bishops be elected, while its committee on the episcopacy proposed one election.

The Northeastern Jurisdiction’s special session also led to two questions that will go before the Judicial Council, the denomination’s top court.

Bishops preside at church conferences but do not have a vote. A number of Northeastern Jurisdiction delegates questioned whether it was in keeping with church law for the jurisdiction’s bishops to make a recommendation on how many bishops to elect.

The Rev. Jay Williams, a delegate from the New England Conference, made a motion asking for a declaratory decision from the Judicial Council on whether such a recommendation violated the denomination’s separation of powers. The delegates voted 81 to 55 to send the question to the church court.

Williams also asked Bishop John Schol, who presided at the special session, to rule on a question of law about whether the online meeting’s format also was in keeping with church law. Schol has 30 days to respond. Bishops’ rulings of law go to the Judicial Council for review.

Two bishops in the Northeastern Jurisdiction retired in 2021 and two more plan to retire by the end of this year. Since last year’s retirements, the jurisdiction’s bishops have gotten creative in providing episcopal coverage.

Easterling, speaking on behalf of the Northeastern Jurisdiction’s bishops, said she and her episcopal colleagues want the experiment in coverage to continue. However, she added that concern about financial stability is another reason she and her colleagues wanted to hold off on any elections until at least 2024.

She said church attendance and overall church giving still have not returned to pre-pandemic levels. More pressing, she said, is the unknown number of congregations that will ultimately choose to disaffiliate between now and the end of next year, when a provision for churches to exit the denomination with property is set to expire.

That “would be a reduction of 15.8% of our worshipping body,” she said. As a result, she said conferences in the jurisdiction could see apportionments — shares of church giving — drop by 10% to 25%.

By the time jurisdictional conferences next meet in 2024 and can reconfigure, Easterling said delegates will have more clarity. “We humbly believe this is a time to prepare for our holy conferencing in 2024,” she said. “Together, delegates, our prayers are with you, as you undertake your work. Please pray for us as we continue to serve you in these extraordinary times.”

Bonnie Marden, chair of the jurisdiction’s episcopacy committee and a delegate from the New England Conference, said the committee recommended one election. She said that would still reduce financial impact, allow the current experiments in coverage to continue and leave just one area needing bishops to take on extra duties or come out of retirement to cover.

The episcopacy committee also explored the possibility of electing two bishops, an option Marden admitted that she herself favored.

Fred Brewington, a New York Conference delegate and fellow episcopacy committee member, agreed with Marden. He made a motion to amend the committee’s proposal of one election to two.

“I would urge folks to vote in favor of the two because I believe that that is our sweet spot with regard to where we are across our jurisdiction,” he said. “And that may very well provide us with the newness that we seek as we go into a new day and a new thing that God has created.”

November is not just the month for bishop elections in the U.S.

The Central Conference of Central and Southern Europe plans to meet Nov. 16-20 to elect one bishop.

To provide continuity of leadership in this tumultuous time, episcopal leaders in Africa announced that no new bishops would be elected in the continent’s three central conferences until after General Conference, now scheduled in 2024.

Ultimately, the delegates voted 81 to 69 to elect two bishops. However, since no jurisdictional gathering can bind the activities of another, the jurisdiction will need to vote again on the number when it meets in November.

Everything about this election season for bishops is unusual.

But amid General Conference’s pandemic-caused postponement to now 2024, U.S. bishops have taken on expanded assignments to ensure episcopal area coverage. The Council of Bishops, concerned about the sustainability of the Episcopal Fund that supports its work, initially recommended no bishop elections be held until 2024.

But after months of expanded workloads, the bishops asked the Judicial Council — the denomination’s high court — whether they had the authority to call jurisdictional conferences. In the meantime, reduced spending and increased giving helped shore up the Episcopal Fund.

With bishops stretched so thin, the Judicial Council agreed with the bishops that new elections need to be held to ensure the continuation of the episcopacy.

The new bishops will have to hit the ground running. Instead of taking office in September when they would have time to familiarize themselves with their new areas, bishops will be starting their assignments on Jan. 1 — the start of the season for bishops to appoint clergy.

Easterling told those gathered at the Northeastern Jurisdiction that she and her fellow bishops stood ready to welcome and work with new colleagues “to the glory of Almighty God.”

“Whatever the outcome of your discernment, there are no winners and there are no losers,” she said. “We are together in this sacred work.”

From California to Louisiana to Iowa, United Methodists are responding with prayer, comfort for the grieving and renewed calls for advocacy against gun violence.
Church Leadership

The Rev. Joel Mora Peña served as an episcopal leader in the Methodist Church of Mexico before immigrating to the U.S. and leading United Methodist churches as a pastor in the Rio Grande Conference. He died Jan. 3 at age 88.
General Church