While recognizing the weariness of aid workers after disasters around the world, the board of United Methodist Global Ministries and the United Methodist Committee on Relief forged ahead, approving more than $10 million in grants at their fall board meeting.

Support for agriculture in Africa and migrants around the world, along with help for survivors of various natural disasters in Haiti, malaria in Africa and wildfires in the Pacific Northwest, was approved during online meetings Oct. 26-29.

Also discussed were plans to rebrand National Justice for Our Neighbors and a pilot program coming to Georgia to get churches plugged into solar power.

“These include the COVID-19 pandemic, uncertainties about the future of our denomination, the perils of climate change and the continuation of systemic racism with its denial of equity in church and society.”

Bickerton added that, “people in all sectors of our work are just tired.”

“This whole theme of ‘the great resignation’ that’s happening across the country … is a part of the new reality,” he said. “And it is a hard reality because what has been very effective in the past can’t be that which we lean on in the future.”

Honoring the late Bishop John K. Yambasu, the board approved more than $1.4 million in support of agriculture development in Zimbabwe, Congo, Sierra Leone, Liberia and Tanzania. Yambasu died after a car crash Aug. 16, 2020, in Sierra Leone.

“We do so in full recognition of the great legacy of Bishop John Yambasu, who we miss every day,” Bickerton said. “We remember his inspiring words of motivation and hope and give God thanks for the way that God worked through that wonderful servant and colleague of ours.” 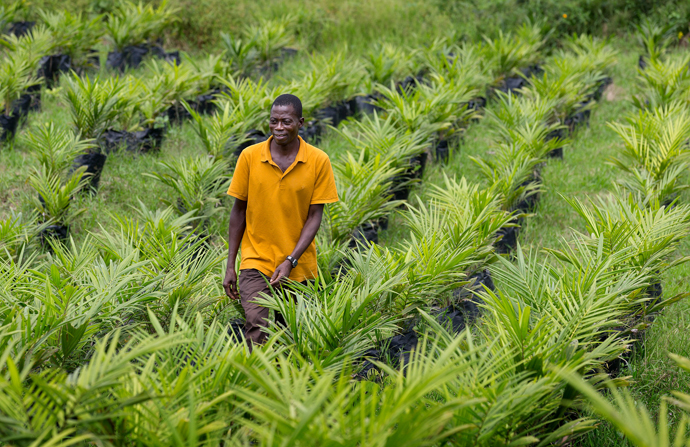 Peter Gomah checks on the health of seedlings in the oil palm nursery at the United Methodist Ganta Mission Station in Ganta, Liberia, in 2017. In honor of the late Bishop John K. Yambasu, the board of United Methodist Global Ministries has approved more than $1.4 million in support of agriculture development in Zimbabwe, Congo, Sierra Leone, Liberia and Tanzania. Yambasu died after a car crash Aug. 16, 2020, in Sierra Leone. File photo by Mike DuBose, UM News.

In honor of another former United Methodist leader, $110,000 was earmarked to provide earthquake, landslide and flooding relief in Haiti. Funds for this grant came from the Rev. Sam Dixon Memorial Fund, matched by UMCOR.

Dixon, chief executive of UMCOR, died in January 2010, when he was trapped by collapsing rubble in a hotel following an earthquake in Haiti. The Rev. Clint Rabb, who led Global Ministries’ office of Volunteers in Mission, also was killed in the disaster.

“Haiti is never an easy place to work because of the political, economic and geographic realities. The recent kidnapping of 17 missionaries and ransom demand are further indicators of the complexity in Haiti,” said Fernandes.

He noted the Aug. 14 earthquake that ravaged southern and western Haiti, causing over 2,000 deaths and injuring more than 13,000 people.

The earthquake response money will be used to increase access to health services in Haiti through two networks of mobile clinics, and access to clean water through establishing six water treatment systems.

The Imagine No Malaria initiative also was approved for $1.6 million in funding.

“Although there's been significant progress over the past 10 years, over 200 million people are infected with malaria each year and 400,000 people die from the disease,” said Tatenda Mujeni, who coordinates the Imagine No Malaria program.

“The INM program aims to contribute to the global fight against malaria, particularly in Africa, with a goal to achieve 20% reduction in malaria morbidity and mortality through the facilities and the communities we work in.”

A ‘new age of witness’

Excerpts from the Oct. 27 speech by Roland Fernandes, chief executive of Global Ministries and the United Methodist Committee on Relief, to attendees of the virtual fall board meeting:
“We’re not going back as the mission agency or as a church or as a world to some pre-2020 normal. That age has passed and focus must be set upon the future.”
“Yesterday will not recruit the missionaries needed today or tomorrow. Nor will it plant congregations. Yesterday will not respond to pandemics nor will it clean the environment. Yesterday will not raise thoughtful children, the leaders of tomorrow. And yesterday cannot fully address the challenges of today or fully imagine the challenges of tomorrow.”
“After months of working online at a distance — churches, conferences, agencies and other Methodist entities are often tempted to work independently and disconnect from each other. But here yesterday’s values of collaboration and connection need to be … revitalized and reimagined in new ways for this new age of witness.”
“We continue to seek insight into this critical area. And though it will not be easy, I hope we will find joy and fulfillment in our work by shaping our witness in these rapidly changing times.”

To support migrants around the globe, $2.2 million was approved.

“The main goal of the global migration program is to support the church in its efforts to provide welcome to refugees and migrants of all types, regardless of where they are on the migration journey,” said the Rev. Jack Amick, who directs UMCOR’s Global Migration program.

At least 65,000 refugees from Afghanistan are expected to seek refuge in the U.S. after President Biden pulled the U.S. out of that country earlier this year.

“The church will serve as one of the official resettlement agencies (and) will assist newcomers with housing, legal assistance, medical care and other essentials,” Fernandes said.

The UMCOR emergency committee has approved $100,000 for a reimbursement program that will compensate United Methodist churches who sponsor Afghans wishing to live in the U.S. Up to $1,000 per church will be available for the program.

“We hope this will encourage local churches to engage in this important and transformative ministry,” Fernandes said.

More than $6 million has been budgeted for U.S. disaster response, with an additional $1.5 million approved for international disasters.

A recovery grant of $250,000 also was approved to assist rebuilding efforts in the Pacific Northwest Conference after wildfire damage. It will be used to help repair homes, outbuildings and fencing and for infrastructure support.

She noted that the denomination, which is shrinking in the U.S., hasn’t attracted younger replacements for the generation of coordinators reaching retirement age. She also said the pandemic has caused funding to be reduced, with some positions transitioning from paid to volunteer.

Two speakers previewed upcoming new initiatives: a move to rebrand National Justice for our Neighbors and a pilot program in Georgia to bring solar power to churches.

The latter effort is a part of the goal to reduce United Methodist greenhouse gas emissions to Net Zero by 2050, in which 10 agencies are participating.

“Our test project will be to provide the opportunity for United Methodist churches in the state of Georgia to install solar on their buildings … at no upfront cost,” said Jenny Phillips, senior technical adviser for environmental sustainability.

“That’s where we’d like Wespath (Benefits and Investments) to come in providing financing for solar equipment installed on United Methodist churches,” Phillips said. “Wespath and Cherry Street Energy are still in the midst of working out the details of how to put that financing package together to develop an agreement that’s mutually beneficial.”

It’s hoped that the solar power project will launch in early 2022, Phillips said.

National Justice for Our Neighbors has hired a consultant to come up with a less wordy name that better describes its mission, said Rob Rutland-Brown, executive director of JFON.

“We’re stepping back and going to take another fresh look at our name and our logo, the way we brand ourselves,” he said. “Hopefully by the spring meeting, we'll have some good updates on where we land in that rebranding.”