Hundreds of worshippers this morning celebrated the life of the Rev. Sam Dixon, the leader of the United Methodist Committee on Relief who was on a mission of mercy when he died in the rubble of the Haitian earthquake.

Friends and family, United Methodists from agency leaders and bishops to North Carolina colleagues and missionaries in the field, gathered at Edenton Street United Methodist Church to remember a life given in service to others.

"Do you not know that a prince and a great man has fallen this day in Israel," the Rev. William Simpson said in a moving eulogy referring to 2 Samuel 3:38. 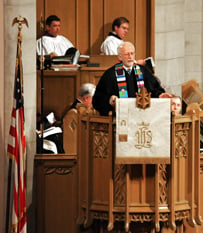 The Rev. James Gulley, an UMCOR consultant who was trapped with Dixon and four other colleagues in the rubble of the Hotel Montana after the earthquake, told the story of their ordeal in a voice occasionally broken by emotion.

Throughout the service, from the opening hymn of "Holy, Holy, Holy! Lord God Almighty" to the white-robed choir's powerful rendition of the "Hallelujah Chorus," participants expressed gratitude for Dixon's life.

"You could not be in his presence and not have a sense of his passion for his faith and for his work," said Bishop Gregory Palmer, president of the United Methodist Council of Bishops.

Bishop Joel Martinez, interim top executive of the Board of Global Ministries, said Dixon didn't take himself seriously, but took his mission seriously.

"Sam would be on the road somewhere today, probably in Haiti, if he hadn't been there at the beginning," Martinez said.

In his eulogy, Simpson said Dixon had little patience for "paltry" politics. "One of his most courageous acts was fostering a partnership between UMCOR and Muslim AID. That has not been entirely popular, but Sam knew it was right."

Simpson married Dixon and his wife, Cindy, and the couple, he said, seemed to be more in love than ever in recent years. He remembered Dixon as a gentle, humble, joyous man who "knew how to use the ways of the world for good" and couldn't live without Diet Coke and chocolate.

"He was not pious by the world's standards, but he was pious by God's standards. His faith was genuine," Simpson said. 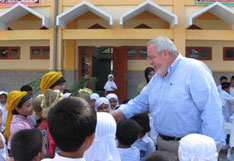 Mourners solemnly recited The Lord's Prayer and sang the doxology after the eulogy. At another point in the service, the congregation said words of praise to God "for Sam, whom you have graciously received into your presence."

Dixon, 60, had served as the United Methodist Committee on Relief's top executive since 2007.

A world traveler for the business of mission, Dixon went to Haiti to discuss projects to improve life in the impoverished island nation. When he walked into the lobby of the Hotel Montana on Jan. 12 - just moments before the earthquake would bring the building crashing down around him - he was anticipating a working dinner with five colleagues.

Instead, he was trapped for several days in the rubble of the hotel, pinned under a concrete slab. Rescuers eventually found the group and four colleagues were saved. They worked to free him, but it was too late. Dixon's death was announced on Jan. 16. A fellow Global Ministries staff member, the Rev. Clinton Rabb, was pulled out but died later from his injuries.

Thomas Kemper, a United Methodist from Germany, whose election to lead the Board of Global Ministries was announced shortly before Dixon's death, expressed his sorrow Jan. 21 on the board's "tribute blog." But he advised those in mourning to "leave the image of entrapment for one in which we see Sam and Clint in a good and secure place-in God's hands, and covered by his love."

Condolences for the loss of both men have poured in from around the world. Among those offering words of tribute were representatives of the Mennonite Central Committee, the Council of Methodist Educational Institutions of Brazil, the Vietnamese National Caucus, and the Methodist churches in Bolivia, Latvia, Britain and Honduras.

A North Carolina native, Dixon had served for 24 years as a pastor before joining the Board of Global Ministries' staff in 1998 as a staff executive in the UMCOR non-governmental organization. He became executive director of the United Methodist Development Fund in 2001, then was elected to lead the board's unit on evangelization and church growth two years later. In that role, he also supervised programs in mission education and relations with mission partners.

Elizabeth "Brooke" Conklin, a director of the Board of Global Ministries, remembered Dixon's certainty as he spoke during a meeting last summer about what propelled him to devote his life to the church.

"Sam spoke that he knew without a doubt that God had called him to be doing exactly what he was doing," she said. "His life, his work, his ministry, his vocation, his passion-all was about responding to God. He knew he was right where he should be and serving where he was supposed to be serving."

Dixon and his wife, the former Cindy Leapley, are the parents of four grown children, Christy, Amy, Josh, and Molly. He also is survived by his mother, three sisters and two grandchildren.

*Bloom is a United Methodist News Service news writer based in New York. Ted Avery, a freelance writer from Durham, N.C., contributed to this story.

The Rev. Jim Gulley: "My last walk with Sam was tragically short."

Shannon Trilli, UMCOR: "He was born knowing he would be a pastor."

Shannon Trilli, UMCOR: "He believed what we did was immeasurable."

Dixon: Man of Faith and Compassion

Blog: Don't Tell me Love Ain't Worth the Fight

Earthquake in Haiti: the church responds