Kingstowne Communion doesn’t have a building. Throughout the pandemic, this new United Methodist church in Alexandria, Virginia, has met online and in pop-up services at parks and other public places.

Though homeless itself, Kingstowne recently furnished an apartment for an Afghan refugee family of three.

That meant finding beds, a sofa (ordered by a donor through Amazon) and other furniture. Extra touches included a front door wreath and a welcoming batch of Afghan cookies.

“This radical hospitality is what we’re called to do,” said the Rev. Alyssa Densham, associate pastor at Kingstowne Communion, which began as a worshiping community five years ago and became an independently chartered church earlier this year.

What’s elated Densham and the Rev. Michelle Matthews, the church’s pastor, is that the effort has galvanized church members and enlisted many others who have offered money and gifts-in-kind — or shown up to help.

Inundated, but not intimidated. Kingstowne Communion, working with the refugee resettlement group Lutheran Immigration and Refugee Services, will this weekend be preparing apartments for two more Afghan refugee families. 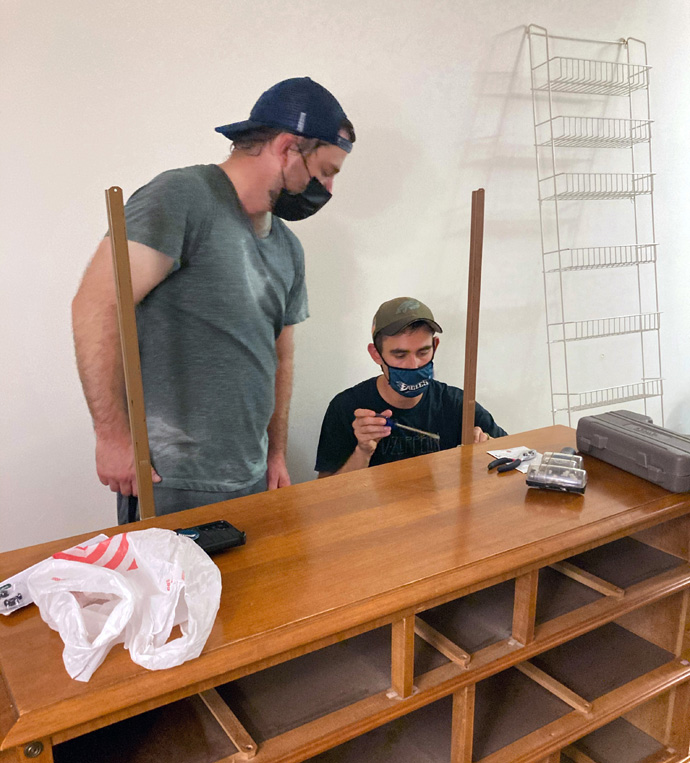 With the recent tumultuous end of the 20-year Afghan war, tens of thousands of Afghans are arriving in the U.S., and United Methodists are part of the massive effort to help them make a fresh start.

El Calvario United Methodist Church in Las Cruces, New Mexico, is used to caring for those who have come across the U.S.-Mexican border but now is collecting clothes (including hijabs), sandals, sanitary napkins and other basics for Afghans whose first stop is the U.S. is Holloman Air Force Base or Fort Bliss — both relatively close to the church.

“El Calvario has always been a place that welcomes a stranger, helps the people in need, so when people land on our doorstep, we’re always there,” the Rev. George Miller, pastor, told a local TV station.

Meanwhile, New Mexico Conference Bishop Earl Bledsoe joined with the Rev. Eddie Rivera, conference provost, and Kristen Bowdre, a United Methodist deaconess who serves as executive director of Justice for Our Neighbors-El Paso, in a comprehensive “Call to Action” on behalf of Afghan refugees.

“Most of us can trace our own family’s lineage back to someone who came to the US from another country seeking a better life,” Bowdre wrote in the appeal.

The Virginia Conference is among those providing information on how churches and individuals can help with resettling Afghan refugees. The Baltimore-Washington Conference is, too.

The United Methodist Committee on Relief has recently posted about its connection with Church World Service and with other partners offering humanitarian relief in Afghanistan. Donation information is included.

Wisconsin Conference Bishop Hee-Soo Jung and Donna Veatch, chair of the conference’s immigration and refugee ministries committee, are among United Methodist leaders appealing for support for the resettlement effort. Their state is home to Fort McCoy, one of those receiving planes carrying Afghan refugees.

Saint John’s United Methodist in Austin, Texas, is among those churches providing money for Afghan refugee resettlement. The church’s Risk-Taking Mission and Service Committee just approved a $5,000 gift to Refugee Services of Texas.

“They have a proven track record settling refugees and we have partnered with them for several years,” said Deborah Dorff, committee co-chair, by email.

National United Methodist Church in Washington has collected diapers, sheets and other supplies for Afghan refugees whose first stop is the Marine Corps Base Quantico in Virginia. But the base has for now suspended accepting donations, given the overwhelming response.

The Rev. Doug Robinson-Johnson said National has two vacant transitional housing units and has contacted resettlement agencies to offer them to Afghan refugees.

The church is waiting to hear back.

“They’re just so overwhelmed administratively that they can’t follow up on the offers,” the pastor said. “We’re still hoping we can provide shelter.”

Various United Methodist annual conferences are posting articles on ways to help in the resettlement effort, and the Virginia Conference, home to bases where refugees are arriving, has one of the most extensive.

Some conferences are specifically asking for financial support for Church World Service, given the Afghan resettlement emergency.

Church World Service is one of nine main U.S. resettlement agencies, and works in 17 states. The United Methodist Church is one of its 37 member communions.

Since Congress passed the Afghan Allies Protection Act of 2009, offering a chance at a Special Immigration Visa (SIV) to those who worked alongside the U.S. government in Afghanistan, Church World Service has helped resettle some 7,000 Afghans.

The pace has increased dramatically in recent days.

“We’ve been working around the clock to make sure people are safe and housed and begin receiving resettlement services,” said Meredith Owen, director of policy and advocacy for Church World Service’s immigration and refugee program.

The United Methodist Committee on Relief is in discussion with Church World Service about helping with temporary housing for Afghan refugees.

UMCOR is part of the United Methodist Board of Global Ministries, and both have worked with ecumenical partners in Afghanistan on humanitarian projects going back to the mid-1960s. (Daniel Terry, a United Methodist layman, was among 10 aid workers killed in remote northeast Afghanistan in 2010.)

While there’s been an understandable focus on fleeing refugees, Afghanistan begins another period of Taliban rule under extreme circumstances.

“With extended drought, growing hunger and widespread poverty, there is a massive unseen crisis across the country that has been years in the making,” said David Wildman, Global Ministries’ main representative to the United Nations and Middle East area liaison, and a frequent traveler to Afghanistan over the years. 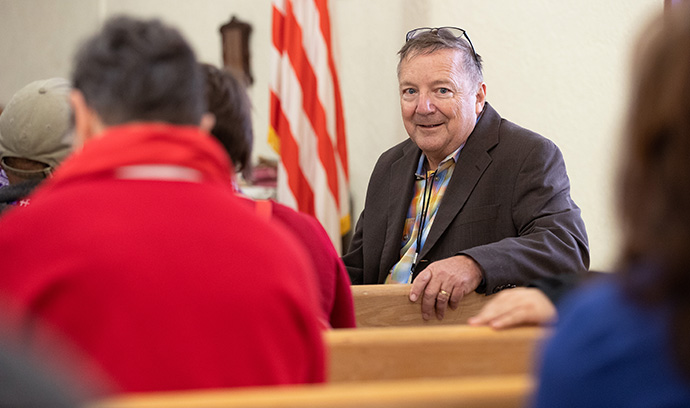 The Rev. George Miller briefs members of the United Methodist Immigration Task Force on a transitional shelter for immigrants at El Calvario United Methodist Church in Las Cruces, N.M., in 2019, when the church was preparing to host migrants who had crossed into the U.S. from Mexico. The church is now collecting supplies for Afghans whose first stop is a nearby U.S. military base. File photo by Mike DuBose, UM News.

UMCOR, in a recent webpage post, noted its plan to continue to support humanitarian relief in Afghanistan.

“Certainly that is our hope, that we would continue to be able to work with partners who are doing good work in Afghanistan,” said the Rev. Jack Amick, who directs UMCOR’s global migration program, in a phone interview.

United Methodists and affiliate groups also are among those pressing the Biden administration to continue to help Afghans who served alongside the U.S., and who did not get to leave before the last U.S. military flight out of Kabul.

“We hope that all those who wish to leave because they have a credible fear for their lives are allowed to leave, and for those with ties to the United States, to come to America,” said Erol Kekic, senior vice president for Church World Service’s immigration and refugee program.

The Rev. Neal Christie is the Baltimore-Washington Conference’s executive minister of connected engagement, and he wrote an essay on how United Methodists can respond to the Afghan refugee crisis, including through advocacy.

Christie said by phone that most refugees quickly become net contributors to the U.S. economy, and that many thousands have been serving as health care and food service workers through the COVID-19 pandemic.

He also noted that the United Methodist Book of Resolutions includes a strong “Welcoming the Migrant to the U.S.” entry.

“This is a gift and an opportunity for the UMC and other Christian communities to receive people, especially those who are coming from Afghanistan,” Christie said.

Amick elaborated on the theme.

“The idea that we welcome the stranger, the foreigner, is key to how we expand the reign of God.”