Advocates for maintaining church policies on homosexuality are championing their own version of the Traditional Plan at the special 2019 General Conference.

Yet another option, also submitted by an advocate for current policies, is a plan to dissolve The United Methodist Church entirely and form new denominations.

Both plans encourage United Methodists to part ways based on how they view the practice of homosexuality. These are among the various possibilities submitted for consideration at the denomination’s special lawmaking assembly on Feb. 23-26, 2019, in St. Louis.

Dramatic changes are needed, these advocates say, in the wake of widespread violations of the denomination’s bans against holding same-gender unions and being “self-avowed practicing” gay clergy.

“The whole problem with the church — the whole reason that brought us to this point — is the constant, blatant breaking of the self-definition of the church,” said the Rev. Maxie Dunnam, who submitted the modifications to the Traditional Plan on behalf of the Renewal and Reform Coalition.

All these groups hold that the denomination’s restrictions are part of core Christian doctrine, mandated by Scripture.

Not all United Methodists agree with that view. For more than 45 years, The United Methodist Church has faced conflict over how the denomination should minister with LGBTQ individuals, including differing biblical interpretations. With a denominational split a clear possibility, the 2016 General Conference authorized the bishops to form a Commission on a Way Forward to envision changes in law and structure that might help preserve unity.

Three plans for the church’s future, including the Traditional Plan, emerged from the commission’s work with the bishops. General Conference delegates will consider those and any other legislation judged to be in harmony with the bishops’ call to the special session. 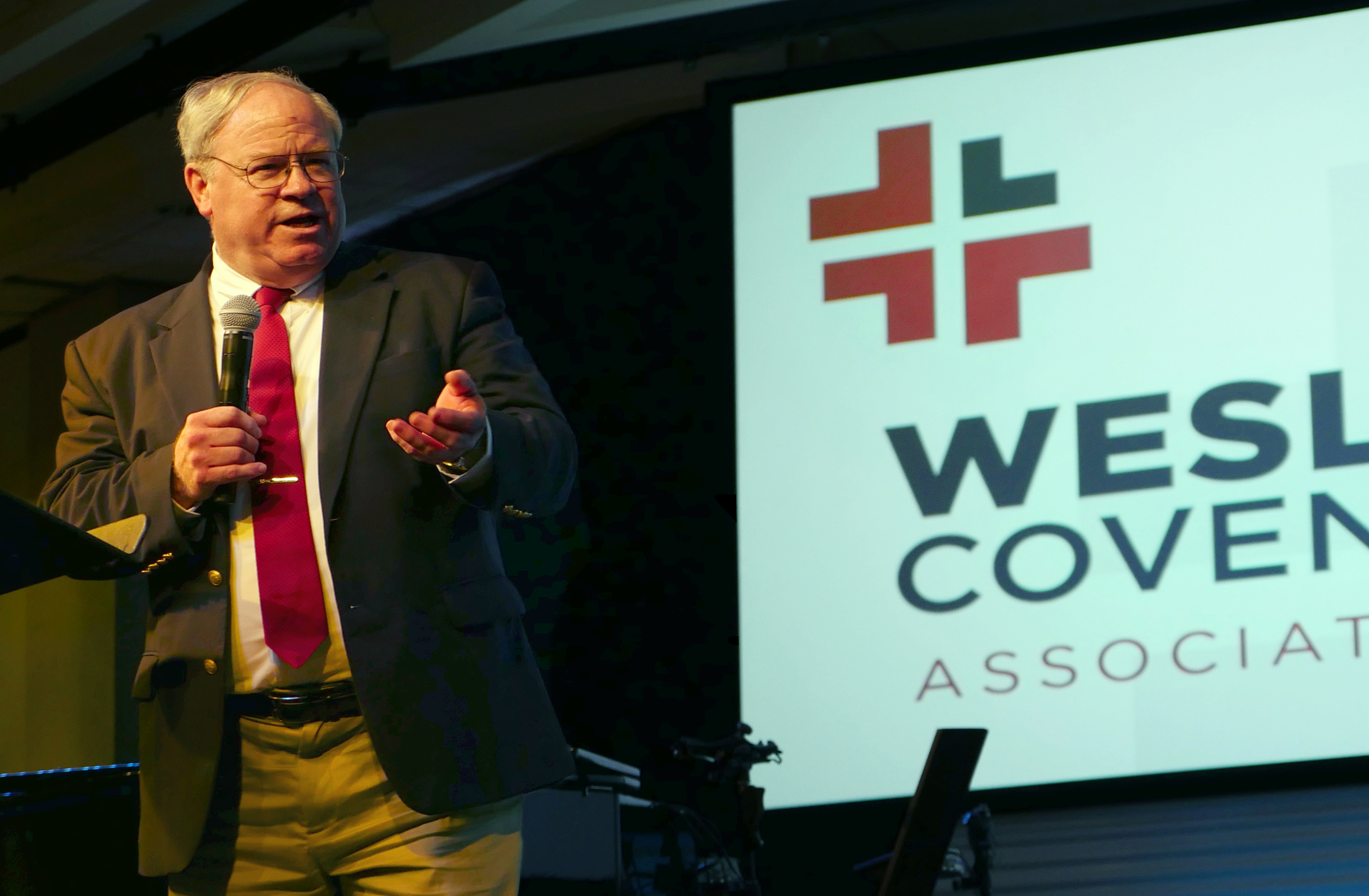 The Rev. Keith Boyette speaks during the April 28-29, 2017, gathering of the Wesleyan Covenant Association in Memphis, Tennessee. Boyette as an individual submitted petitions to allow churches to exit while keeping their property and a plan for dissolving The United Methodist Church. Photo by Tim Tanton, UMNS.

The majority of bishops recommend the One Church Plan, which would leave decisions to allow same-gender weddings up to churches and gay ordination up to annual conferences. The plan also would remove the statement — in the denomination’s Book of Discipline since 1972 — that the practice of homosexuality “is incompatible with Christian teaching.” The plan adds protections for United Methodists who view the practice of homosexuality as sinful.

The Connectional Conference Plan would reorganize the church in the U.S., with conferences aligning based on theology or perspective on LGBTQ ministry. This plan calls for multiple constitutional amendments to the denomination’s constitution — a high hurdle.

Traditionalist advocates express concerns about both plans, especially the One Church proposal.

The Traditional Plan aims to strengthen enforcement of the denomination’s prohibitions and establish a way out for churches and conferences that don’t agree to abide by church rules on homosexuality.

The plan, as submitted in the commission’s report, sets minimum penalties and quicker expulsion after conviction of violations.

It requires bishops and annual conferences to certify that they would uphold, enforce and maintain Disciplinary standards on marriage and ordination.

The plan requires that beginning in 2021, the General Council on Finance and Administration — the denomination’s finance agency — neither receive nor send funds to conferences that do not pledge to uphold the Discipline until they form a self-governing church. The plan also requires the finance agency to stop these conferences from using the United Methodist name and the cross and flame insignia except under a concordat agreement.

This section of the plan, titled “Implementing Gracious Accountability,” does allow local churches to leave with property, assets and liabilities into the self-governing denominations.

The Traditional Plan “provides a gracious way for any local church and any annual conference to leave the denomination without having to worry about the possibility of losing or having to litigate for their property and assets,” writes the Rev. Walter Fenton in an essay on the Traditional Plan for the Wesleyan Covenant Association.

A petition submitted by Dunnam augments the gracious accountability section, by adding a $200,000 grant to annual conferences leaving the denomination to help pay for transitional expenses. The General Council on Finance and Administration can fund these grants using reserves held by the denomination’s general agencies.

Dunnam’s petition also stipulates that by Sept. 1, 2020, the bishops who do not commit to uphold the Discipline’s prohibitions will no longer receive funding for housing, office or travel, and will instead be encouraged to join a self-governing church.

The legislation also says provisions in the gracious accountability section “shall take effect immediately upon the adjournment of the 2019 General Conference and shall take precedence over any conflicting provisions in the Discipline that are not in the Constitution.”

“We just have to deal with all those issues that might be taking place and assist people to move forward for the sake of the Kingdom,” Dunnam said.

The Rev. Thomas Lambrecht, a Way Forward Commission member who agreed to be the submitter of the commission’s Traditional Plan, said he regards Dunnam’s legislation as “friendly amendments.” Indeed, Lambrecht — a vice president of Good News and council member of the Wesleyan Covenant Association — helped Dunnam in drafting the petitions.

The Rev. Keith Boyette, the president of the Wesleyan Covenant Association, as an individual has submitted legislation to create an exit path for churches to keep their property whether or not the Traditional Plan prevails at General Conference.

“Why would an institution — the UM Church — want to force the unwilling to be part of that to which they are not passionately and freely committed?” Boyette wrote in an essay for the Wesleyan Covenant Association. He is also a reserve General Conference delegate from the Virginia Conference.

While he a champions the Traditional Plan, Boyette also submitted a constitutional amendment that encompasses a plan to dissolve The United Methodist Church. Changing the denomination’s constitution requires a two-thirds vote of General Conference and two-thirds ratification votes in the annual conferences.

“I submitted a petition for dissolution of the denomination because, like many other fair-minded people, I think our differences are irreconcilable,” Boyette told United Methodist News Service. “I know it is hard for some people to hear or understand that, but I believe it is our present reality. Our differences involve matters at the core of our faith, mission and ministry.”

He added that he agrees with those who assert that the way church members have dealt with these differences has caused harm.

A number of LGBTQ advocates and other church members have announced that they have no intention of leaving The United Methodist Church. At the same time, some congregations already have headed for the exits because of lack of enforcement of church rules on homosexuality. Among the churches that have departed is a congregation led by a council member of the Wesleyan Covenant Association.

Dunnam said that with greater enforcement, he thinks traditionalists will stay.

Boyette said that no one at this point can really predict the outcome of the special General Conference or the consequences of any action it takes.

If the Traditional Plan is adopted, he anticipates there will be a period of living into that reality where churches and individual members evaluate their options.

“I suspect some will remain committed to The United Methodist Church while others will determine that their most effective ministry will be in moving in a new and different direction,” he said. “I believe the same process will unfold in the event the One Church Plan, the Connectional Conference Plan or some other plan is adopted.”

MARCHA passed a resolution backing the One Church Plan.