What form The United Methodist Church takes next will remain unclear until the 2020 General Conference meets this spring.

In a gathering that emphasized the denomination’s uncertain future, United Methodists received a preview of some of the possibilities that will be before 862 delegates when they meet May 5-15 in Minneapolis.

But, he added, Minneapolis also “can be the place where God pours out God’s extravagant love and grace on a hurting, broken, anxious church and liberates us from our conflict.”

More than 400 delegates, communicators and other United Methodists who will be part of the 2020 General Conference attended the Jan. 23-24 preview event at the Omni Nashville Hotel. UM News and United Methodist Communications sponsored the event, with involvement and support from other agencies and ministries of the church.

Near the top of the agenda was an overview of various proposals to separate or, in one case, dissolve the denomination in hopes of ending the church’s decades-long dispute over how accepting to be of homosexuality.

The gathering also included presentations on other legislation that could affect United Methodist ministry.

This is a brief look at some of the issues explored. A number of topics covered in the briefing will be addressed in future stories by UM News. Those will include proposals affecting young people’s ministries, the status of women, the general church budget, ecumenical relationships and the future of ethnic-focused ministries. 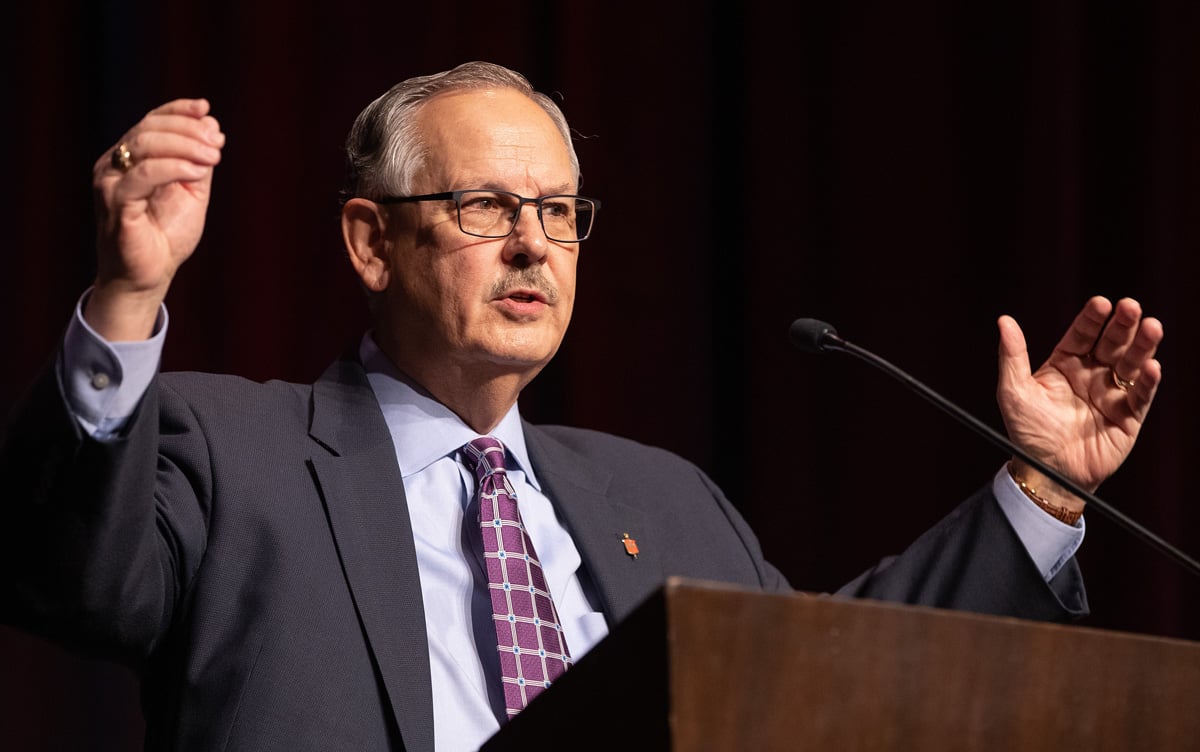 The rancorous special 2019 General Conference, by a 438-384 vote, tightened the denomination’s bans on same-sex weddings and “self-avowed practicing” gay clergy. However, those church rules have faced increasing resistance.

Confronted with what many see as irreconcilable differences, various groups of United Methodists have worked throughout 2019 on proposals to let the denomination split along theological lines.

Participants at the Nashville gathering heard from developers of four such proposals. These included “New Denominations of Methodism,” also known as the Indianapolis Plan; “New Expressions Worldwide” from UM-Forward; “Next Generation UMC” from UMCNext; and the “Protocol of Reconciliation & Grace Through Separation.”

By far the plan that has grabbed the most attention is the protocol. The proposal is a mediated agreement among bishops and leaders of advocacy groups with differing perspectives on LGBTQ inclusion. The plan resulted from discussions initiated by Sierra Leone’s Bishop John Yambasu.

The Pre-General Conference briefing drew mostly people from the U.S. However, the gathering also included perspectives from leaders in the central conferences.

In a meeting after the regularly scheduled briefing, delegates and other leaders from Africa and the Philippines gathered to discuss and promote A Christmas Covenant: Our Gift of Hope.” The covenant calls for church unity and legislative equality between the U.S. and central conferences.

While the covenant was released weeks before the protocol, drafters said they plan on sharing their ideas with those who drafted the protocol.

The proposed protocol also aims to restructure the remaining global United Methodist Church into regional conferences with flexibility to adapt church policies, including on LGBTQ inclusion.
“The uniqueness of this conversation was that it was broad; it was diverse,” said the Rev. Junius Dotson, a delegate from the Great Plains Conference and top executive of Discipleship Ministries. “It was initiated by central conference leaders; and of course, this conversation morphed into a conversation that was mediated by the world-renowned Ken Feinberg.”

Developers of the Indianapolis and UMCNext plans both contributed to the protocol, and presenters for each plan announced their groups’ backing of the newest proposal.

The protocol does not ask anyone to leave The United Methodist Church. However, it allows traditionalist congregations and conferences to separate and form a new denomination, while keeping their properties and getting $25 million in United Methodist funds.

Still, the Rev. Jay Williams — a leader in UM-Forward and delegate from the New England Conference — voiced concerns about how the protocol came into being. He noted that UM-Forward and leaders of the denomination’s ethnic caucuses were not at the table. He also said that the protocol developers were the only plan backers who had a United Methodist Communications “press conference.”

UM-Forward developed the New Expressions Worldwide, or N.E.W., Plan that would dissolve The United Methodist Church and form four new global denominations instead.

“We believe dissolution is the faithful way forward,” said the Rev. Alka Lyall, one of the plan’s developers and a delegate from the Northern Illinois Conference.

Under the plan, the new denominations would align along traditionalist, moderate, progressive or liberation perspectives. UM-Forward, which seeks to center itself on people of color and LGBTQ individuals, sees itself in the last category.

The group’s vision of liberation, Williams explained, is “a spiritual and social way of living, a posture toward the future that is grounded in past struggle and present resilience that proclaims: We are loved into freedom.”

Those at the Nashville meeting also heard about the proposed U.S. regional conference. The new structure would encompass the United States and maintain the current five U.S. jurisdictions.

The group’s goal is to have a body to take up matters that solely affect the U.S. church and ease the burden on the multinational General Conference. U.S. proposals often dominate the global lawmaking assembly.

The regional conference also would have the authority to adapt those parts of the Book of Discipline that central conferences — church regions in Africa, Europe and the Philippines — can adapt.

Wespath, the denomination’s pension agency, collaborated on the legislation to help vet any legal or administrative issues. Bishops in Africa, Europe and the Philippines have endorsed the plan.

Andy Hendren, chief legal counsel for Wespath, said his benefits and investment agency sees itself as a servant of the church that “works through complex issues” to help people in their everyday lives.

It’s a big task. Even if no one entered the Wespath retirement plans from this day forward, Hendren said, “we would still be paying pensioners into nearly the next century.”

To help with long-term sustainability, Wespath is also proposing other changes to U.S. clergy retirement plans.

Changing to a defined-contribution plan would not reduce benefits that retired clergy already receive or reduce what active clergy have already earned.

The 2016 General Conference assigned two bodies to take a hard look at the number of bishops and potentially propose changes to the denomination’s map.

General Conference’s Standing Committee on Central Conference Matters had the task of looking at where to add five new bishops in Africa, where bishops typically have a big role in development and peacemaking. The committee has submitted legislation that adds a new central conference to the continent and increases the number of African bishops from 13 to 18.

Establishing a new central conference requires a two-thirds majority vote at General Conference. By a simple majority, General Conference determines the number of bishops the denomination will fund. The proposed general church budget already anticipates the addition of the new bishops.

The Jurisdictional Study Committee, authorized by General Conference 2016, looked at the number of bishops in the U.S. Under the Book of Discipline, each jurisdiction currently has a minimum of five bishops with the additional number of bishops determined by a membership formula.

Under the committee’s proposal, the denomination’s Episcopal Fund would still cover the costs of a minimum of five bishops in each jurisdiction. But annual conferences in a jurisdiction will directly support any additional bishops in that jurisdiction. Any changes to U.S. bishop counts would be up to General Conference. 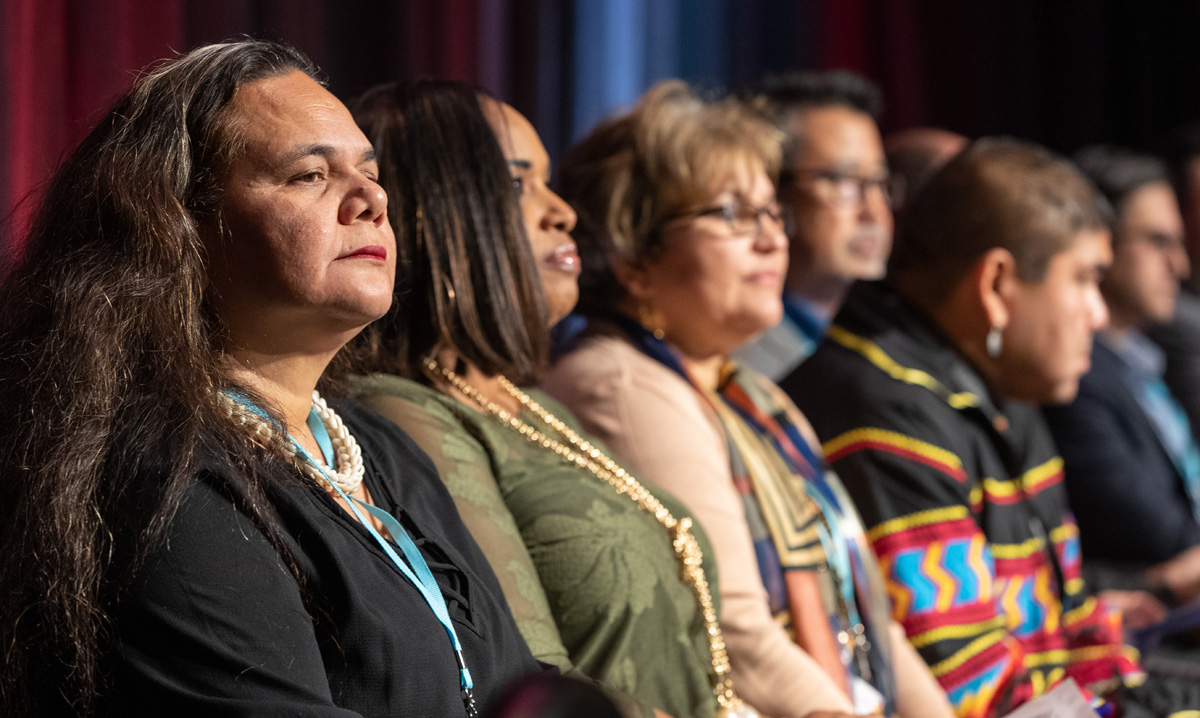 Monalisa Tuitahi, executive director of the Pacific Islander Ministry Plan, and other representatives of The United Methodist Church’s ethnic initiatives watch a video on the work of the initiatives during the 2020 Pre-General Conference Briefing in Nashville, Tenn. Photo by Mike DuBose, UM News.
Revised Social Principles

The task of developing those fell to the United Methodist Board of Church and Society, which strives to promote the denomination’s social teachings around the globe. Such teachings tackle topics that were near to John Wesley’s heart such as care for the most vulnerable, justice for workers, opposition to slavery and stewardship of God’s creation.

To draft the revisions, Church and Society embarked on a nearly eight-year project that first involved listening sessions around the globe.

The revised document is broken down into four sections: creation, economic, social and political communities. Scriptural passages and excerpts from John Wesley’s writings introduce each section. The proposal reduces the number of statements from 76 to about 50. International teams of United Methodists drafted the proposed Social Principles that will be going to GC2020 for a vote.

“It is indeed I think a gift given to the church by the people of the church with people from around the globe,” said the Rev. Susan Henry-Crowe, Church and Society’s top executive. “It will be a resource for mission and ministry.”

With so many big decisions ahead, United Methodists will need prayer for God’s guidance and peace.

The Upper Room will make a prayer guide in multiple languages available for the 40 days ahead of GC2020, said the Rev. Tom Albin, director of spiritual formation and congregational life. Prayer resources also will include a weekly video and podcasts. These resources will be at umcprays.org, a website that is still being built.

During General Conference, there will be space for people to meet with prayer volunteers and spiritual directors.

To show hospitality, the Dakotas-Minnesota host committee intends to greet every delegate, guest, bishop and spouse with a handmade purple prayer scarf.

The General Conference theme, “… and know that I am God” from Psalm 46, will help shape these times of devotion.

“When God is known, then we have a way and knowledge to find our way forward,” Albin said.