The 2016 General Conference opted to keep the same number of U.S. bishops, but that’s so United Methodist leaders can take a hard look at remaking the denomination’s map.

The church’s top lawmaking assembly passed on its consent calendar legislation that maintains the status quo while a committee examines the number and boundaries of U.S. jurisdictions and episcopal areas.

That means United Methodists in the U.S. Northeast — which faced a potential reduction because of membership losses — will keep nine active bishops at least for the next four years. The Northeastern Jurisdiction will elect two bishops when it meets July 11-15 in Lancaster, Pennsylvania.

United Methodist bishops, like their namesake chess pieces, have some restrictions on their movement. While tasked with general oversight of the denomination, individual bishops typically can lead conferences only within a certain geographical area.

The study of jurisdictional borders — the first such examination since The United Methodist Church’s formation in 1968 — could result in changes to those geographic areas. Put another way, bishops ultimately could be keeping in check a very different mission field.

“The important piece is to have a strong and fresh look at the current jurisdictional conferences’ boundaries through multiple lenses,” he said.

Those lenses include emerging missional needs and the United States’ changing demographics. Most importantly, Royappa added, the church needs a strategic implementation plan.

Meanwhile, Pittsburgh Area Bishop Thomas J. Bickerton said the reprieve for the Northeastern Jurisdiction would help with disciple-making. Simply giving bishops more territory to cover can be counterproductive, he and other church leaders said.

“No one can underestimate the significance and influence of leadership on all levels of church life,” he said. 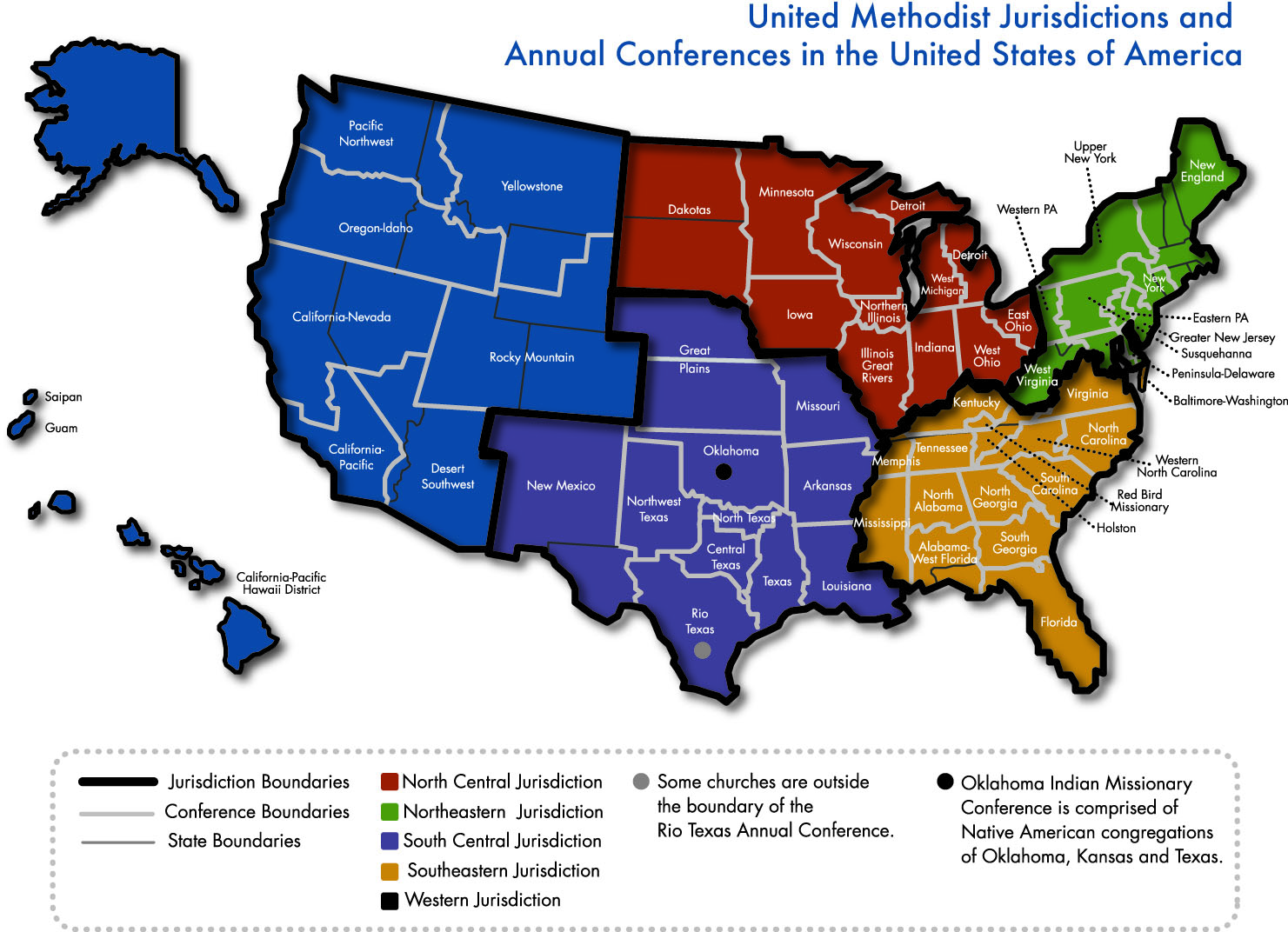 The role of jurisdictions

Jurisdictions serve as the denomination’s intermediate organizational structures in the United States, which has five jurisdictions. They encompass groups of annual conferences and oversee the elections of bishops.

Central conferences — church regions in Africa, Asia and Europe — occupy a similar place in the denomination’s organization. Over the next four years, General Conference’s Standing Committee on Central Conference Matters intends to develop a plan for adding five new bishops in Africa.

The U.S. jurisdictional structure dates back to 1939’s reunification of three denominations (two that had split over slavery) to form the Methodist Church. The goal then was to prevent U.S. northerners from having a say in the election of southern bishops and vice versa. The original structure also included the Central Jurisdiction, which segregated the church’s African-American members.

However, those numbers do not tell the whole story.

Bonnie Marden, a General Conference delegate and chair on the Northeastern Jurisdiction’s episcopacy committee, noted her jurisdiction pays the highest percentage of requested church apportionments — an average of 94.3 percent since 2005. In the past four years, according to the denomination’s finance agency, the jurisdiction paid a surplus of $3 million over what is required to support its nine bishops.

The cost of a U.S. bishop over the next four years will be about $1.3 million.

The 2008 General Conference revised the formula for allotting U.S. bishops. If a jurisdiction lost too many members, it potentially could lose a bishop. All jurisdictions are entitled to at least five bishops.

Last September, the denomination’s finance agency notified leaders in the Northeastern and North Central jurisdictions that their membership declines meant General Conference could reduce their bishops. The General Council on Finance and Administration administers the Episcopal Fund that pays for bishops’ salaries.

Leaders in the Northeastern Jurisdiction appealed to General Conference to keep bishops based on their missional needs. The jurisdiction encompasses states stretching from West Virginia to Maine.

The legislation instructs the Council of Bishops in consultation with the interjurisdictional committee to appoint the study committee.

Royappa of Wisconsin said he hopes the study will serve as a wakeup call to focus the missional provisions in the Book of Discipline, the denomination’s governing document. General Conference largely determines its contents.

Similarly, Bickerton said he hopes the study committee will address the need to determine episcopal areas by missional needs rather than membership.

Fred Brewington, the incoming chair of the Interjurisdictional Committee on Episcopacy and a General Conference delegate from the New York Conference, said the study committee is “both timely and necessary.” In the coming four years, he noted both the Standing Committee on Central Conference Matters and the Connectional Table, a denomination-wide coordinating body, will be looking at the church’s global nature.

“We can now, for the next four years, avoid impacting the missional needs of the jurisdictions while working to address the broad issues we face worldwide.”