Despite a request to reconsider, the board of The United Methodist Church’s finance agency is pressing on with plans to slash the denomination’s budget starting in 2021.

During its Nov. 15-16 meeting, the board of the General Council on Finance and Administration also made plans for the parts of the church budget it oversees — with an eye toward spreading the pain around.

Much of the discussion revolved around how the multinational denomination can be financially sustainable even as its U.S. membership and financial base continues to decline.

What is the impact on the local church?

The board of the General Council on Finance and Administration proposed in August shrinking the general church budget in hopes of keeping more resources in the local church.

But that’s not guaranteed since each annual conference sets its own apportionment formula for local church giving.

Under the current budget, 85 cents of every dollar in the offering plate remains in the local church; 7 cents goes to jurisdictions, conferences and districts; 6 cents to second-mile giving such as support for the United Methodist Committee on Relief.

About 2 cents of every dollar in the offering plate goes toward the general church budget.

Read press release from the General Council on Finance and Administration.

Basically, the board decided to shrink the financial pie.

Earlier this month, the Connectional Table — the board’s partner in deciding how to slice up the pie — sent a letter urging the board to reconsider the proposed cut. The Council of Bishops, at the request of its Immigration Task Force, also discussed the letter.

Based on current estimates, the denomination is looking at a proposed general church budget of $498.65 million for the years 2021-2024. That’s about $105 million less than the current four-year budget approved by the 2016 General Conference.

Such a sizable cut, the letter said, could threaten the denomination’s identity as a “connectional church.”

Bishop Minerva G. Carcaño, both a finance agency board member and chair of the Immigration Task Force, made sure the letter was part of the board’s conversation.

“In our decisions around budgeting, are we moving from being a connectional church to a more congregational church?” she asked her fellow board members.

The Rev. Steve Wood, chair of the board’s General Agency and Episcopal Matters Committee, responded. He said the entire board desires “a very strong connectional church.”

“The challenge comes when there is an evaporation of people, apportionment dollars and local churches,” said Wood, who is also lead pastor of Mount Pisgah United Methodist Church in Johns Creek, Georgia.

“I would pray simply that God would lead us to understand that …what we’re doing is building a sustainable, scalable model.”

The board’s executive committee also is finalizing a response to the Connectional Table.

For the past four years, the denomination has seen collection rates from annual conferences go up. However, church leaders have long projected that the shrinking U.S. membership makes the current funding levels unsustainable. While the church is growing, particularly in Africa, the United States still provides the lion's share of general church funding. Overall, the collection rate is 2 percent below where it was at the same time in 2017.

Budget planning is still in its early stages. General Conference, the denomination’s top lawmaking body, will have final say on the size and allocation of the denominational budget at its 2020 session.

Not discussed was the potential impact of the special General Conference next February that bishops have called to find a way through the potentially church-splitting debate over homosexuality.

However, the discussions at the recent meetings of the Connectional Table and finance agency board offered a preview of some of the issues on the table. 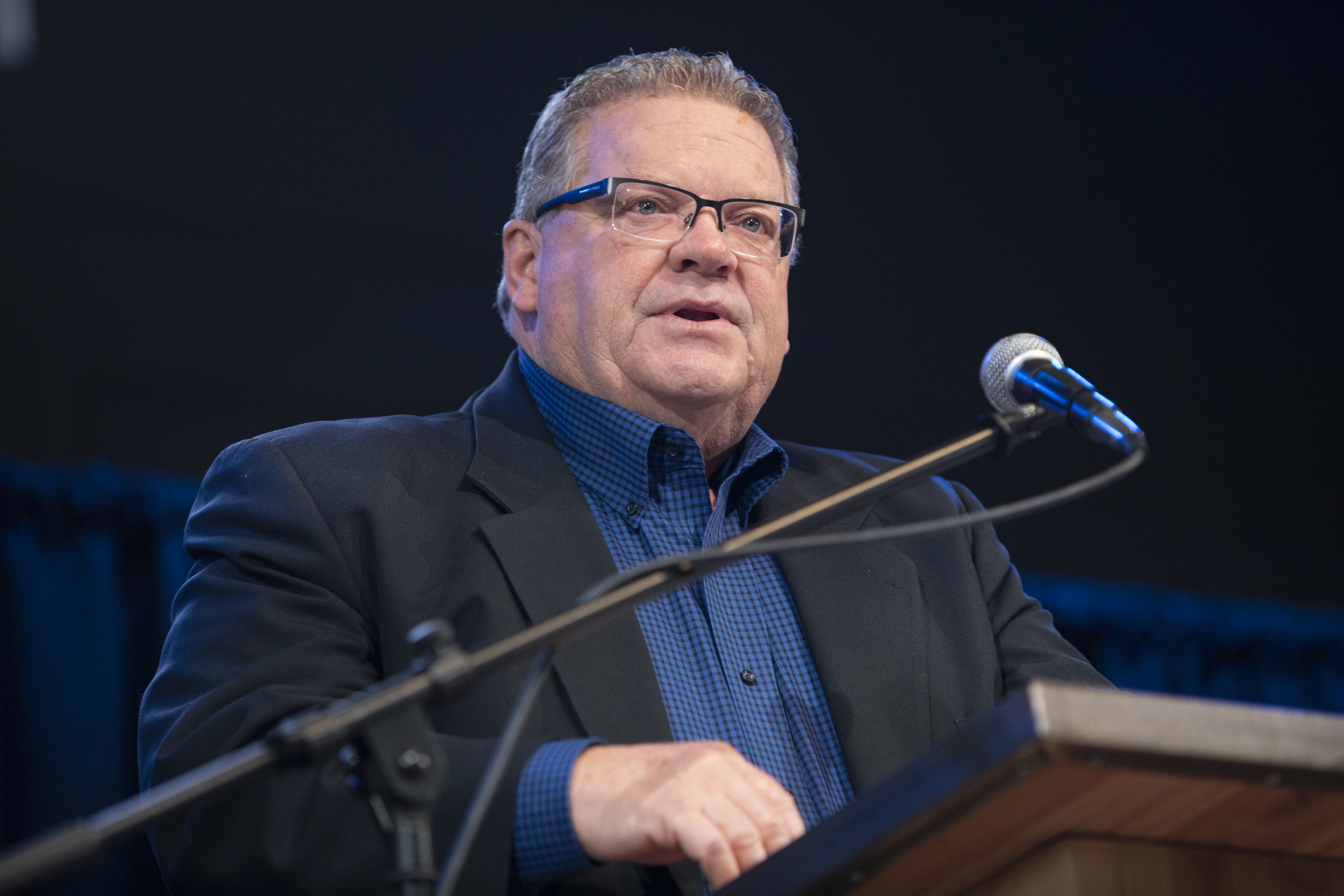 The Rev. Steve Wood from the North Georgia Conference speaks at the board meeting of the General Council on Finance and Administration held at Providence United Methodist Church in Mount Juliet, Tenn. Photo by Kathleen Barry, UMNS.

The Connectional Table has responsibility for allocating the other five funds. They are the World Service Fund that supports most of the 13 general agencies; the Ministerial Education Fund that supports United Methodist seminaries and seminary students; the Black College Fund; Africa University; and the Interdenominational Cooperation Fund.

The finance agency board proposed allotting about $100 million to the Episcopal Fund in 2021-2024, an increase of about 8.7 percent from the current budget. The increase is to accommodate the five new African bishops already approved by General Conference. The budget includes planned cuts for bishops’ meetings as well as planned average annual salary increases of 2.5 percent for the bishops.

Rick King, the finance agency’s chief financial officer, told the board that the new bishops would cost an estimated $4 million over four years.

The board initially proposed reducing the General Administration Fund allocation by about 14 percent. However, at its November meeting, the board proposed instead to cut the fund by 18.2 percent, so the total will be just under $30.2 million.

The cuts to the General Administration Fund include a 22.4 percent reduction for the finance agency itself.

They also include an 11.6 percent cut to the budget of the Commission on General Conference, which plans and executes the big meeting.

The Rev. Gary Graves, the secretary of General Conference, told the board that the proposed reductions came as a complete surprise when presented on Nov. 15.

“While it is a preliminary allocation that you are looking at, we need to be very clear that General Conference itself and its leadership has had no ability to work on the numbers this references at all,” he said.

The board also proposed about $9.5 million in fixed charges, a 10 percent decrease from the current budget. Those fixed charges come from the World Service, Episcopal and Interdenominational Cooperation funds. They mostly cover audit fees, data collection and treasury/accounting support provided by the finance agency.

Minus the fixed charges, the Connectional Table will have about $361.6 million to allocate — about a 23 percent decrease from the current budget.

A big concern at both the Connectional Table and finance-agency board meetings was what the reduction would mean for the World Service Fund.

“Our general agencies, particularly our smaller ones — Religion and Race and the Status and Role of Women — their work is critical,” said the Rev. Sandra Olewine, a board member and pastor of First United Methodist Church in Pasadena, California. “Yet the percentage of World Service that goes into their budgets is very high.”

The Rev. Steve Court, board member and director of connectional ministries at the East Ohio Conference, said he is mindful of the concerns. He even had a book on the World Service Fund with him.

However, he said conferences like his are also struggling, particularly with rising health care costs. He hopes the Connectional Table also will keep such challenges in mind.

“The first place budgets have been cut has been at the annual conference level,” he said.

But she also raised concerns about maintaining the core missions of the funds the Connectional Table will allocate.

Bishop Michael McKee, the president of the finance agency board, promised that he would reach out to leaders of both the Connectional Table and the Council of Bishops to discuss budget concerns further.

Court offered a note of hope that there may still be a way to increase the size of the financial pie.

“Another part of this conversation is not actually setting the budget but raising the money,” he said. “No matter the budget we set, if we increase giving, more money will become available because the payout will be higher.”

This year also marks the first time the denomination’s finance agency is also reporting apportionments from outside the U.S.
General Church

The finance agency board set a starting point that would cut more than $105 million from the general church budget in 2021-2024.
Connectional Table

The Connectional Table sends letter to the United Methodist finance agency, raising concerns about changes that could slash agency funding.