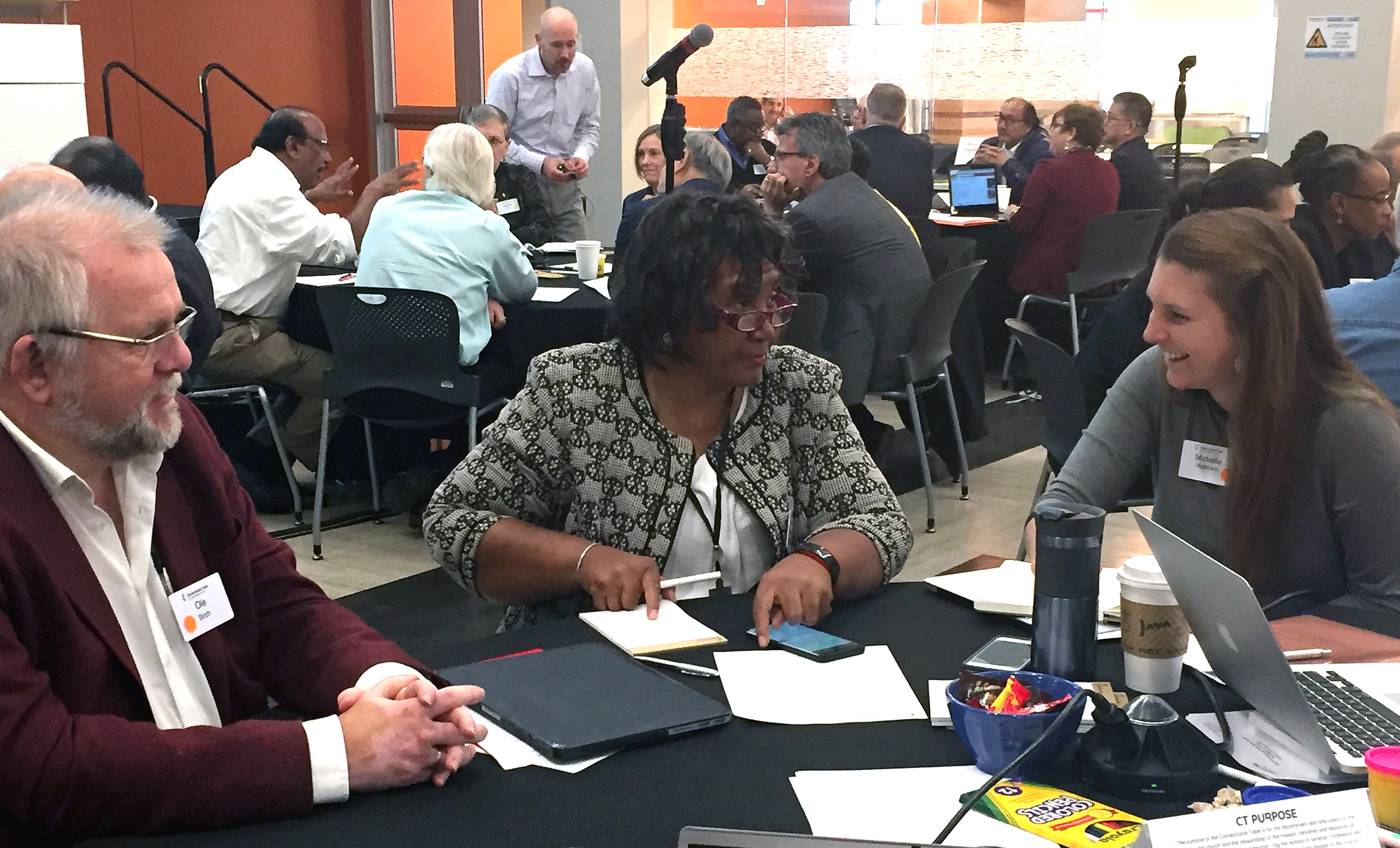 Connectional Table members talk about ways to strengthen relationships across all levels of the denomination. Pictured from left are the Rev. Ole Birch of Denmark, Benedita Penicela-Nhambiu of Mozambique and Michelle Hettman of the Virginia Conference. Photo by Heather Hahn, UMNS.

United Methodist leaders are urging their partners in the denomination’s budget process to reconsider proposed cuts to church funding.

In a rare act of public disagreement with the denomination's finance agency, Connectional Table members unanimously voted Nov. 2 to send a letter to the board of the General Council on Finance and Administration expressing their misgivings. The Council of Bishops voted Nov. 7 to refer the same concerns to its own finance committee.

Connectional Table members also approved a process for allocating their part of the general church budget. Before getting down to the business of slicing up the financial pie, the leaders sounded an alarm at how small the pie is.

“We are concerned that there is ‘a minimum level’ of funding for program needs of the denomination that will essentially mean we are no longer a ‘connectional church,’” the letter said.

The Indiana Conference’s Bishop Julius C. Trimble reiterated that worry in moving that the letter be referred to the bishops’ finance committee.

“In our responsibilities, we are aware that this raises serious concerns for our missional, connectional work especially as it relates to migration and immigration,” he said. Trimble is a member of the bishops’ Immigration Task Force.

Five of the six past General Conferences already have approved “significant cuts” to the portion of the budget that funds agencies, the letter noted.

The General Council on Finance and Administration has received the letter and plans to discuss it at its upcoming Nov. 15-16 board meeting, said Sharon Dean, the agency’s communications director.

The Connectional Table, which coordinates the work of denominational agencies, typically works alongside the finance agency board in developing the general church budget that goes before General Conference voters every four years. Top agency executives participate in Connectional Table meetings with voice but not vote.

In August, the General Council on Finance and Administration board took the lead in setting the bottom line. In doing so, the board adopted the recommendation of its Budget Advisory Team, which includes leaders from both the board and the Connectional Table.

Based on current estimates, the new formula would result in a proposed general church budget of $498.65 million for the years 2021-2024. That’s about $105 million less than the current four-year budget approved by the 2016 General Conference.

The general church agencies will bear most of those cuts. For them, the changes could mean about a 22 percent loss in funding.

The challenge the church faces is that while the 12.5-million-person denomination is growing, particularly in Africa, more than 90 percent of its funding still comes from the United States.

The goal is to leave more funds within U.S. local churches. That’s not guaranteed since each annual conference sets its own apportionment formula for local church giving.

Still, the overall goal resonated with a number of Connectional Table members.

The Rev. Jerry DeVine, a district superintendent in the Michigan Conference, said many U.S. local churches are struggling under the current model.

“I have 85 local churches; probably at least 25 of them have a quarter-time pastor,” he said. “This year, they are one family loss away from either not paying their ministry shares — their apportionments — or not paying their pastor.”

Bishop James E. Swanson Sr., of the Mississippi Conference, countered that most local church budgets are not tied up in supporting the general church but in carrying out their understanding of ministry, which can present its own challenges.

“That’s a deeper conversation I think the Connectional Table ought to explore at some point,” Swanson said. “You could take away all of their apportionments and some of the churches I serve would continue to struggle.”

The Connectional Table is responsible for proposing allocations for five of the denomination’s seven general church funds. Those are: The World Service Fund that supports most of the 13 general agencies; the Ministerial Education Fund that supports United Methodist seminaries and seminary students; the Black College Fund; Africa University; and the Interdenominational Cooperation Fund.

Allocations to the Episcopal Fund are increasing to accommodate the five new African bishops already approved by General Conference. The General Administration Fund is facing a 14 percent cut.

The expectation is that the World Service Fund will experience the deepest cuts, and that was what had Connectional Table members the most worried.

During the meeting, members who represent the denomination’s five official racial/ethnic caucuses had a message for fellow leaders: Partnership with agencies helps their ministries bear fruit.

A number of small groups discussing the budget also reported that they did not want to see agency work diminished.

“We may not be able to change the decision that has been made, but we can say something,” said the Rev. Ole Birch, a Connectional Table member, in proposing the letter.

The Connectional Table’s letter concluded by saying: “Our hope is that there will be a formal response to our concerns and a reconsideration of the base rate by Jan. 1, 2019.”

Board members of The United Methodist Church’s finance agency discussed the potential impact of rising church disaffiliations even as they celebrated an uptick in giving and the sale of the agency’s building.
Local Church

Officials of the United Methodist Church’s pension and health benefits agency met with central conference representatives to discuss pension plan sustainability in a challenging period for the denomination.