Claremont School of Theology faces a court order saying it must offer its Claremont, California, campus for sale to The Claremont Colleges, a neighboring consortium of schools — and for a price likely to be millions below fair market value.

The financially embattled United Methodist seminary has long been willing to sell its 16.4-acre campus near Los Angeles. But seminary leaders insisted on getting a fair market price, which they put at about $40 million.

During ligation that has gone on for years, The Claremont Colleges has stressed a 1957 legal agreement reached when the consortium sold the seminary land to relocate in Claremont. The agreement gave the consortium a repurchase right if the seminary ever put the land up for sale — and under a formula that guarantees a price far below what the seminary has been saying it needs to right itself financially.

Recent rulings have gone The Claremont Colleges’ way, and the latest, issued in early January in Los Angeles County Superior Court, made clear that Claremont School of Theology had through past actions triggered a “right of first offer” in the 1957 agreement and must “promptly” offer to sell its property to the consortium under the formula.

While neither side has spelled out how much The Claremont Colleges would pay under the formula, the seminary suggested in a statement last year that the price could be as little as 10 percent of fair market value. Given the school has an appraisal of the property for nearly $40 million, that would mean just $4 million. 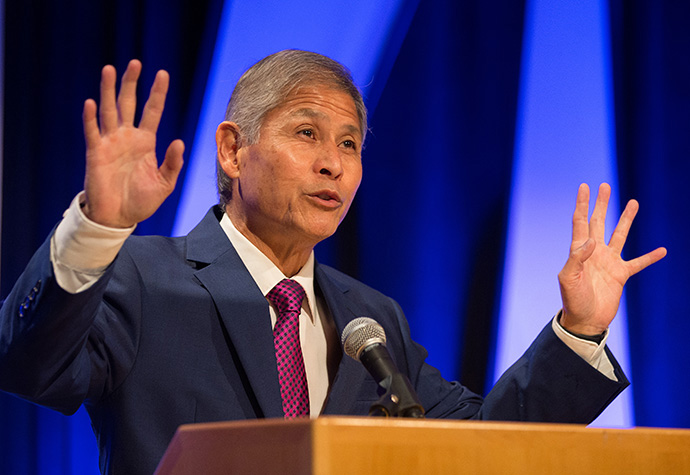 United Methodist Bishop Grant Hagiya addresses the Pre-General Conference Briefing in Portland, Ore., in 2016. Hagiya serves as president of the Claremont School of Theology corporation and is on the school's trustee board. File photo by Mike DuBose, UM News.

The latest court ruling brings more trouble and uncertainty for the seminary, which a few years back said it was relocating to Willamette University in Salem, Oregon, then last year announced plans to have campuses in both Claremont and Salem.

Seminary leaders said in a press release that they are considering appealing the recent ruling but will explore other options, including arbitration.

“We hope to collaborate in good faith with The Claremont Colleges Inc. to identify a mutually beneficial and fair resolution to this matter that will allow CST to continue to operate on our present property, perhaps on a smaller footprint, while also supporting the future fiscal stability of our institution,” said the Rev. Jeffrey Kuan, president of Claremont School of Theology.

California-Pacific Conference Bishop Grant Hagiya, who is president of the Claremont School of Theology corporation and a member of the trustee board, also was quoted in the press release.

“We know we have a shared goal with The Claremont Colleges — and that is to put the needs of students first to prepare the next generation of future leaders,” Hagiya said. “We hope to find a peaceful and equitable solution that honors and serves both the constituencies of Claremont School of Theology and The Claremont Colleges.”

“The litigation has been complex and taken several years, but TCC is the prevailing party,” the consortium said in its own press release. “The rulings issued provide a clear path forward for resolution of this matter.” 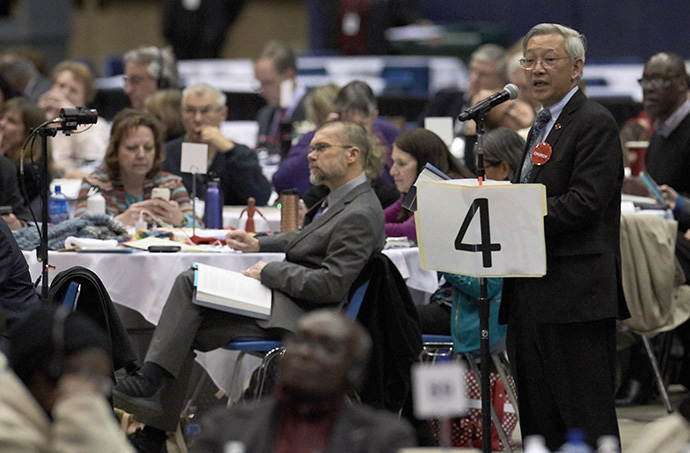 The Rev. Jeffrey Kuan addresses the 2019 United Methodist General Conference in St. Louis. Kuan served as a delegate at that conference, and he continues as president of Claremont School of Theology. File photo by Paul Jeffrey, UM News."

A frequently-asked-questions statement by The Claremont Colleges suggests the property may be used for additional student housing for consortium schools, as well as for offices and classroom space.

Claremont School of Theology — one of 13 United Methodist seminaries — was founded as Maclay College of Theology in 1885 in San Fernando, California, but soon moved to Los Angeles to become part of the University of Southern California, then a Methodist-affiliated school.

By 1957, with USC having cut its denominational ties, the seminary moved to the nearby college town of Claremont as a standalone school.

The consortium sold the seminary land for a campus. But the agreement included a restriction that the land be used for educational purposes.

The agreement also spelled out that if the seminary chose to sell the land, the consortium would get to buy it back, and under a formula that has turned out highly favorable to the consortium.

Since 1957, Claremont has educated many Methodist pastors and scholars, and has been the only one of the 13 United Methodist seminaries on the West Coast.

Kuan began as president in 2013 and has strengthened the seminary’s United Methodist ties, while also positioning it as a theologically progressive institution and a leader in online education.

The Association of Theological Schools’ profile on Claremont School of Theology shows it with a headcount of 287 students in the fall of 2020, as the pandemic was well underway. That was down from 359 the year before. The seminary had seen some growth in earlier years.

But the school has long struggled financially, accumulating debts and at times spending down its endowment.

Claremont is currently accredited by the WASC Senior College and University Commission, but with a “Notice of Concern” because of the school’s finances.

In 2017, Kuan announced that the seminary was exploring becoming part of Willamette, a bold idea that held the prospect of saving operating expenses and generating cash through a sale of the Claremont campus.

Two years before, the seminary had begun talking to The Claremont Colleges about a property sale. The idea was to sell most of the campus, but keep enough for the seminary to continue operating in Claremont.

The Claremont Colleges offered $14 million for about 10.5 acres and agreed to renovate some of the seminary’s housing. That offer went beyond what the 1957 agreement would have required for a price.

Seminary leaders considered The Claremont Colleges’ offer inadequate. They decided that selling the whole campus, and for fair market value, was what was needed to repay loans, rebuild the endowment and cover relocation costs. And they had an appraisal on the land for close to $40 million.

In 2016, the seminary filed suit against The Claremont Colleges, arguing that changes in California law meant the 1957 agreement no longer held. A long period of claims and counterclaims began.

A 2019 trial court ruling seemed to clear the way for the seminary to get fair market value, with The Claremont Colleges given a “right of first refusal” when the property went up for sale at the seminary’s preferred price.

But an appeals court ruling overturned that, saying the consortium retained a “right of first offer” and that the 1957 formula for a sale price also still applied.

The appeals court found that the seminary had triggered The Claremont Colleges’ repurchase right under the formula through its actions, including reaching a lease/sale agreement with Yalong Investment Group.

The case went back to the trial court, which in its recent ruling essentially enforced in detail the appeals court decision for The Claremont Colleges.

As the years of litigation went on, the seminary moved forward with a plan to move to Willamette. Some faculty moved there and began to hold classes from there. Kuan even wrote a farewell letter to the Claremont community, published in the local paper.

But the appellate court ruling for The Claremont Colleges caused the seminary to pivot last summer, saying it had decided not to sell the Claremont property and would try to maintain its base there and keep a second presence at Willamette.

Since the pandemic, Claremont School of Theology has had its classes online, with faculty members based in Salem, Claremont and elsewhere, and administrators in Claremont.

Seminary officials declined an interview request. Kuan said in this month’s press release that the recent court ruling is important but doesn’t affect the seminary’s accreditation status or focus.

“Our number one priority is ensuring our current and prospective students maintain access to the world-class education they want and deserve from Claremont School of Theology. We prefer to carry out that mission on our campus in Claremont, where we have successfully done so for more than 135 years,” he said.

The United Methodist Church is helping empower women through a group-based funding strategy where women contribute to and benefit from small loans.
Church Leadership