Claremont School of Theology has sometimes seemed to have nine lives.

Now it will go forward with two campuses.

A year ago, the financially challenged United Methodist seminary was on track to sell its Claremont, California, location and become embedded within United Methodist-affiliated Willamette University in Salem, Oregon.

Some faculty and students had already made the move, as had thousands of library books. The Rev. Kah-Jin Jeffrey Kuan, president of Claremont School of Theology, penned a farewell to the Claremont community, published by the local paper on May 22, 2020.

“As we depart Claremont, I pray the legacy we leave behind is one of hope, perseverance and gratitude,” Kuan wrote.

But the COVID-19 pandemic slowed the move and halted in-person classes. Then in January, a California appellate court ruled against the seminary in its effort to sell the Claremont campus at fair market value.

The California Supreme Court decided earlier this month that it would not review that ruling.

So, Claremont School of Theology has pivoted, confirming it will operate in Claremont and Salem, with the hope of leasing part of the California campus to raise much-needed funds.

While acknowledging disappointment at the court decisions, Kuan points to the school’s improved enrollment numbers and ahead-of-the-curve approach to online and hybrid classes as reasons for optimism.

“Our future looks exciting and good,” he said. “We are unwavering in carrying out our mission to prepare our graduates ‘to become agents of transformation and healing in churches, local communities, schools, nonprofit institutions and the world at large.’”

Claremont School of Theology is one of the 13 United Methodist seminaries in the U.S., and provides graduate-level education for pastors, chaplains, religion scholars and others.

Founded in 1885 as Maclay College of Theology in San Fernando, California, the school moved a few years later to Los Angeles, to become part of then Methodist-affiliated University of Southern California. By 1957, with USC having cut denominational ties, the seminary had relocated to the nearby college town of Claremont (“City of Trees and Ph.Ds”) as a standalone institution.

On its own, in a region where The United Methodist Church is not numerically strong, money problems have long beset Claremont School of Theology — as have periods of reduced enrollment and struggles in maintaining accreditation.

“CST has seen dramatic fluctuations in revenues and continuing shortfalls in revenues to cover expenses over the last several years,” a visiting accreditation team wrote in 2017.

At one point, the seminary seemed headed for an inter-religious future, as incubator for and partner in a new graduate school consortium called Claremont Lincoln University. The move seemed to promise financial stability, given the level of philanthropic support.

But accreditation reports note the complexity and confusion of the project, as well as United Methodists’ concerns about it — and by 2014 the seminary had withdrawn. 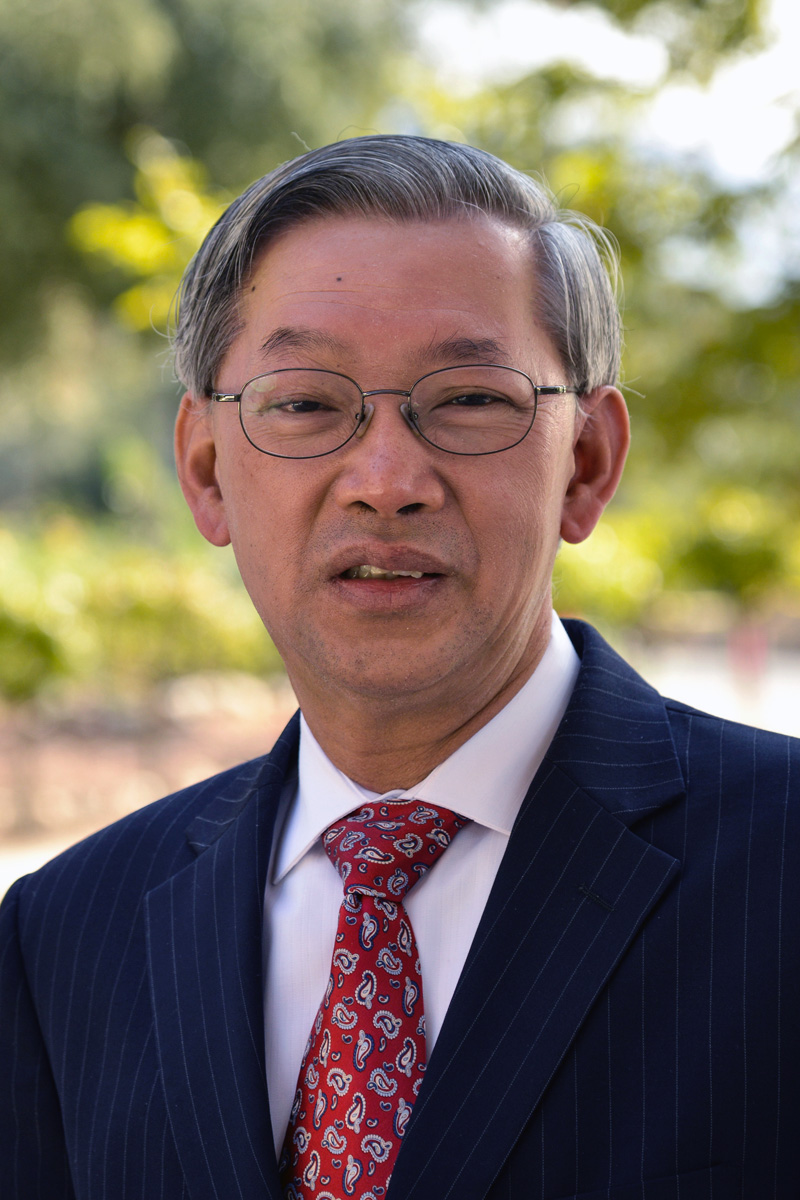 Enrollment has been on the rise (320 students in 2020-21), in part because the school was an early adopter of online instruction. Accreditors have saluted Kuan and fellow administrators for that and other positive changes, and Kuan enjoys strong support from the trustee board chair, the Rev. Patricia Farris.

“Dr. Kuan is one of the most resilient, tireless, visionary and faithful church leaders I have ever met or had the privilege of working alongside,” said Farris, pastor of First United Methodist Church of Santa Monica, California.

But the latest accreditation report from the Western Association of Schools and Colleges includes a statement of concern about the seminary’s finances, noting years of annual deficits, as well as having to seek loans and spend down the endowment.

Under Kuan, selling the 16.4-acre Claremont campus and moving to Willamette University became the strategy for deliverance. It held the prospect of raising $35 million or more, and reducing expenses long term.

The schools began discussions in 2017 and signed a memorandum of understanding in 2019, with the plan for Claremont to be an affiliate of Willamette first, and eventually one of its graduate schools. By late summer 2019, the first professors and students were in Salem.

But litigation with The Claremont Colleges has dogged the effort to move.

Kuan and other leaders felt they had to get fair market value to right the seminary financially. The seminary and The Claremont Colleges negotiated but failed to agree on a price. The matter landed in court, with claims and counter claims about whether the deed’s provisions still were in effect under state law.

The seminary seemed to have the upper hand when a trial court judge ruled it was entitled to fair market value, with The Claremont Colleges getting first right of refusal.

But in January, a California appeals court reversed the trial court decision, concluding that the original agreement, giving The Claremont Colleges the chance to buy the property for a much lower price, still held. The state’s top court decided earlier this month that it wouldn’t review the matter.

“Because of the decision of the appellate court, and the California Supreme Court denial to hear the case, selling the property is no longer an option,” Kuan said.

In 2019, the seminary had entered into a lease-and-sale-option agreement with Yalong Investment Group, a Chinese firm involved in education, and a down payment yielded important income. But The Claremont Colleges has gone to court to block such a lease.

“The Claremont Colleges is trying to do everything to mess with what we’re doing,” Kuan said.

Leaders of The Claremont Colleges Services (which coordinates for the schools in the consortium) said ongoing litigation prevented them from commenting in detail. But they did provide a short statement:

Kuan is just as confident the seminary will ultimately be able to lease parts of its campus to Yalong and others. He also said the school is finally near to having a balanced budget, thanks in part to reduced expenses.

Administration will stay in Claremont, and that will be Kuan’s base, though he plans to travel regularly to Salem. 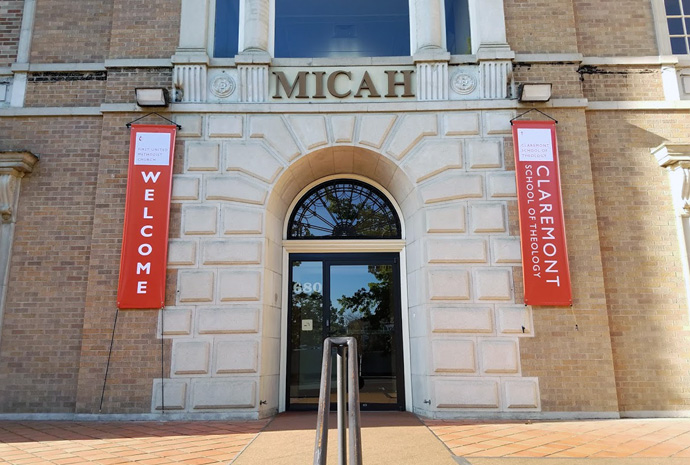 First United Methodist Church of Salem, Ore., displays banners welcoming the Claremont School of Theology. The United Methodist seminary made a partial move from Claremont, Calif., to Willamette University in Salem almost two years ago. Photo courtesy Claremont School of Theology.
He noted that many students are in hybrid programs (combining online classes with campus visits) and don’t live near either Claremont or Salem.

Among those professors who moved to Salem is Nicholas Grier, who teaches practical theology, spiritual care and counseling.

He’s impressed with the working relationships he’s been able to form and the resources he’s been able to tap into at Willamette. When the Pacific Northwest was in the spotlight for racial strife and racial justice protests, Grier felt that he, an African American, was listened to and appreciated by the Willamette community.

And he’s glad Claremont has come to the region, even if the move hasn’t gone as planned.

“It presents a lot of opportunities for us to expand our impact,” Grier said.

Willamette University President Stephen Thorsett acknowledged challenges for his school’s partnership with the seminary. But on the program side, he insists, it’s a match made in heaven.

“Even though we have not been able to advance our legal and financial relationship at the pace we once envisioned, our affiliation is already yielding benefits to students at both schools, as the staff and faculty build connections, learn from each other and collaborate on scholarship and service,” he said.