“And it came to pass in those days, that there went out a decree from Caesar Augustus…” — Luke 2:1 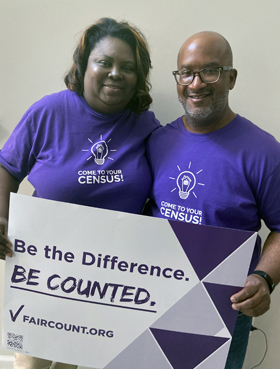 The Rev. Ralph Thompson (right), senior pastor of Columbia Drive United Methodist Church, and Taressa Thompson, the church’s first lady, stand with a Fair Count sign and “Come To Your Census!” T-shirts. The two are working with the nonpartisan nonprofit to make sure people get counted in the census. Photo courtesy of Taressa Thompson.

When first asked to help with this year’s U.S. census, the Rev. Eric Reece was initially hesitant to add to his already packed schedule ministering in a pandemic.

“But what came to mind was the Christmas story,” the United Methodist pastor said. “It’s because of a census that I know the story of salvation.”

He figured if a Roman census played such a significant role in Christ’s birth, then Christ’s followers have a role to play in ensuring an accurate census.

Now his congregation, Robbinsville United Methodist Church, is working with other nonprofit groups across western North Carolina to increase the usually low census response rate in their rural, mountainous region.

The North Carolina congregation is not alone. All across the United States, United Methodists are trying to make sure everyone in the U.S. can stand up and be counted in the once-a-decade census. They especially are focusing on historically undercounted populations, including people of color, immigrants, renters and rural residents.

Whenever these church volunteers deliver meals from their food pantries or check in on their neighbors, they are also likely to ask: “Have you filled out your census?”

The U.S. Constitution in its first article mandates that the country hold “an Enumeration” of its population every 10 years. Today, that means the U.S. Census Bureau seeks to count everyone living in the United States and its five territories. This is the 24th national census since 1790.

Census records are not just a boon for your family genealogist. The count determines how many seats each state will have in the U.S. House of Representatives, and helps states draw congressional and state legislative districts.

The census also provides critical information that guides the distribution of more than $1 trillion in federal funding each year. Some 316 federal spending programs rely on the census count in disbursing tax dollars for hospitals, fire departments, schools, roads, college grants and other community resources.

Stand up and be counted

The U.S. Census Bureau asks a few simple questions about those living in each household as of April 1, 2020. Any person can fill out the information for their whole household.
The questions take around 5 to 10 minutes to complete. Basically, the census asks how many people are in a household, their ethnicity, their sex, their relationship to each other, phone number and the nature of the abode — house, apartment or mobile home. The census does not ask if you are a U.S. citizen.
The questionnaire is offered in the following languages: English, Spanish, Chinese, Vietnamese, Korean, Russian, Arabic, Tagalog, Polish, French, Haitian Creole, Portuguese and Japanese.

You can respond and learn more at the Census Bureau’s website.

“As people of faith, we focus on the needs of our community and the people that we serve,” said the Rev. Ralph Thompson Jr., senior pastor of Columbia Drive United Methodist Church in Decatur, Georgia. “But the truth of the matter is money doesn’t always follow the need. It follows the number.”

Time is running out to make sure that number is correct. The U.S. Census Bureau announced in August that it would end all data collection Sept. 30, a whole month earlier than initially planned.

With more than a third of households nationwide yet to be counted and work already delayed because of the coronavirus, the bureau needs all the help it can get in encouraging each U.S. household to submit its information. People can respond by mail, by phone or online.

The bureau has official census takers visiting households that have not already responded, but is also encouraging faith groups to reach out to their congregations as well.

Columbia Drive United Methodist Church is working with Fair Count, a nonpartisan group that aims for an accurate count of everyone in Georgia. Fair Count’s founder, the former gubernatorial candidate Stacey Abrams, is a member of Columbia Drive.

“We thought that it was very important in a community that looks like ours where we can see the under-resourcing that everyone be counted,” said Thompson, who leads a predominantly African American congregation of more than 450 members.

The church has held a Census Sunday, where Thompson showed a video about the census and preached on the topic.

Taressa Thompson, his wife, also works with Fair Count as the group’s faith and technology associate. She said the women and men of the church have a friendly competition to see how many friends and neighbors they can encourage to fill out the census. The Thompsons also have T-shirts that urge: “Come to Your Census!”

Robbinsville United Methodist Church sits in beautiful but remote Graham County, North Carolina, where fewer than half of the households have internet broadband.

The church has worked with its local school district to provide internet hotspots for those days when students must rely on remote learning. Reece sees helping the census the same way he sees helping local schools — as part of the Christian calling to love our neighbors.

Of 100 counties in North Carolina, he said, Graham County came in 100th in census response rate in 2010. 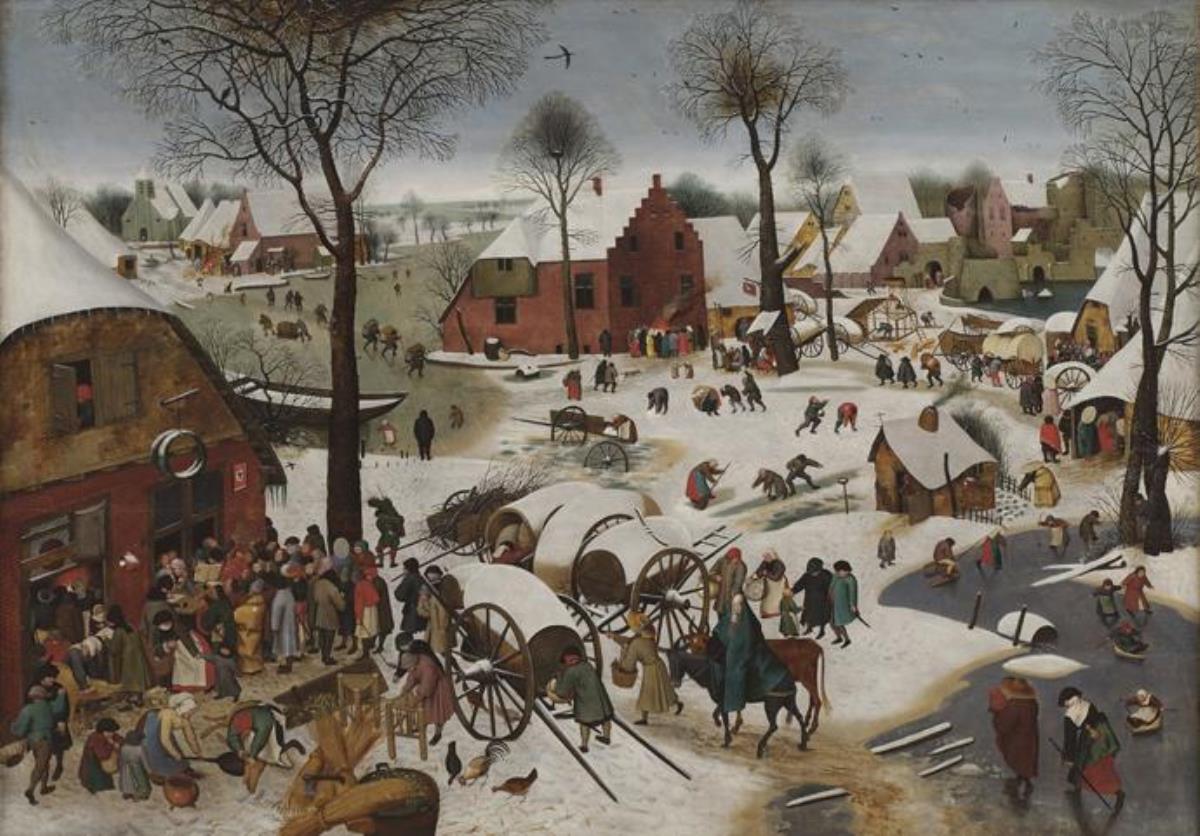 “The Census at Bethlehem” painted in 1566 by Flemish artist Pieter Bruegel the Younger from a model by the artist's father, Pieter Bruegel the Elder. The painting is in the Royal Museums of Fine Arts of Belgium in Brussels. Photo courtesy of Wikimedia Commons.

The church is working with Dogwood Health Trust, a philanthropic organization in Asheville, North Carolina, that has come up with an unusual approach to incentivize the census. 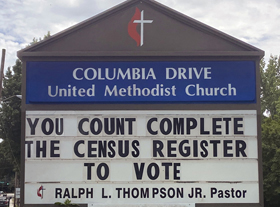 Columbia Drive United Methodist Church in Decatur, Georgia, is among the congregations across the U.S. encouraging people to turn in their census forms. Photo courtesy of Taressa Thompson.
The census is not just important for community resources but for evangelism too.
United Methodists use the data to help see the all the people God has given.
MissionInsite, part of ACS Technologies, provides analytics that help churches revitalize existing ministries and determine where to plant new congregations. U.S. census data is among MissionInsite’s tools, among multiple surveys. About 50 of the 54 United Methodist conferences in the U.S. subscribe to MissionInsite.
Each conference has its own criteria for starting new churches and ministries. But knowing population density and where populations are growing is a start, said the Rev. Chuck Salter, MissionInsite vice president and a United Methodist elder.
“In both church planting and church revitalization understanding the context of community is what helps to shape clear focus of mission and vision,” Salter said.

In an area that includes 18 counties and the Eastern Band of Cherokee, Dogwood Health is offering nonprofits $10 for each person the group adds to the census. Robbinsville United Methodist Church has taken on the role of recruiting other nonprofit groups and has hired a former census specialist to help coordinate the work.

Dogwood Health has budgeted about $1.5 million for its census initiative, including funding for advertising. The trust also is working closely with U.S. Census Bureau staff in this endeavor.

Betsey Russell, who is heading the trust’s initiative, said the charity sees the program as a great return on investment. She pointed to an analysis by George Washington University that for every person counted in North Carolina, the state gets more than $4,000 in federal program dollars each year. That adds up to about $40,000 per person over 10 years.

“There is no way a foundation, even one of our size, could address all the needs in a region,” she said. “Public funds are infinitely more vast and are meant for this work.”

As of Aug. 31, Russell celebrated that eight of its counties and the Eastern Band of Cherokee have exceeded their 2010 census response rates. One of those counties is Graham County, which so far has a nearly 33% response rate compared to 31% in 2010.

Having a complete census is a justice issue, said the Rev. Rochelle Andrews. She is the associate director for the Center for Public Theology at United Methodist Wesley Theological Seminary and associate pastor at Oak Chapel United Methodist Church in Silver Spring, Maryland. She and others in the Baltimore-Washington Conference put together the “Everyone Counts” webinar series that concluded with a session on the census.

The census is serious business. But even in the late days of summer, Reece can’t help but associate the hard work of counting with the promise of Christmas.

“Whenever you think of the Christmas story, you can’t help but smile and hear the angels sing,” he said. “If the angels rejoice over one person who is counted, then we can do anything to help all people be counted.”

The United Methodist Church in the Central Conference of Central and Southern Europe has been helping refugees from Ukraine with ministries including food, clothing, aid and bi-lingual services.
General Conference

Amid talk of denominational division, more than 275 General Conference delegates and other church leaders have signed an open letter sharing their commitment to work toward strengthening The United Methodist Church.