The Rev. Carolyn Abrams has a little trouble remembering all the “firsts” her daughter Stacey has achieved. First black woman to be a major party nominee for governor is just the latest.

After winning more than 75 percent of the votes to be Georgia’s Democratic nominee for governor, Stacey made it a point to thank her United Methodist pastor parents — the Revs. Carolyn and Robert Abrams — during her acceptance speech. She also quoted the Bible from the Book of Esther, “We were born for such a time as this.”

“Stacey knows Georgia, I’m proud of her, proud that she continues to do what she has always done, if she sees a need she tries to meet it,” Carolyn said. The Abrams are retired United Methodist pastors who served churches in Mississippi. 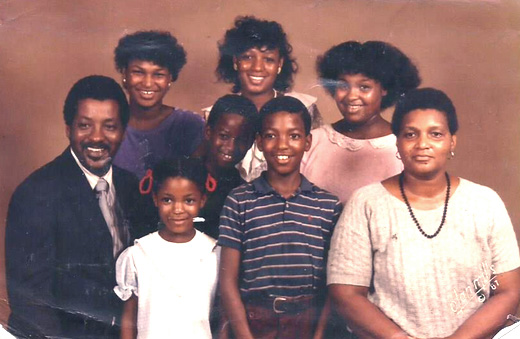 Stacey Abrams and her five siblings grew up in Gulfport, Miss. Photo courtesy of Stacey Abrams

Stacey is one of six children, all raised to lead lives of service. The family started out in the Baptist Church, but Carolyn and Robert began to see United Methodists were doing the things they wanted to do.

When Stacey was in high school, her parents heard a call to ministry in The United Methodist Church. They packed the family up in their old station wagon and left Gulfport, Mississippi, heading to Atlanta and the United Methodist Candler School of Theology at Emory University.

“I was baptized in the Baptist church, but I remember confirmation class in The United Methodist Church,” Stacey said in an interview with United Methodist News Service. “The thoughtfulness of why we are United Methodist and what it means stuck with me, especially that notion of service being core to how we live our faith.”

She said she has spent her adult life continuing what her parents taught her.

“Mom and Dad were clear they weren’t taking us to heaven with them. They were going to anchor us with all the education opportunities they could, but our faith was our responsibility,” she said.

When the Abrams started their master of divinity classes, neither one of them could type—but Stacey could. She ended up typing up all their papers.

“I was the only one in the family who could type, which meant I read probably more carefully and more closely than a lot of young people do, the underlining narrative of our faith tradition,” Stacey said.

Her mother chuckles about that. “She probably earned a master of divinity degree herself.” 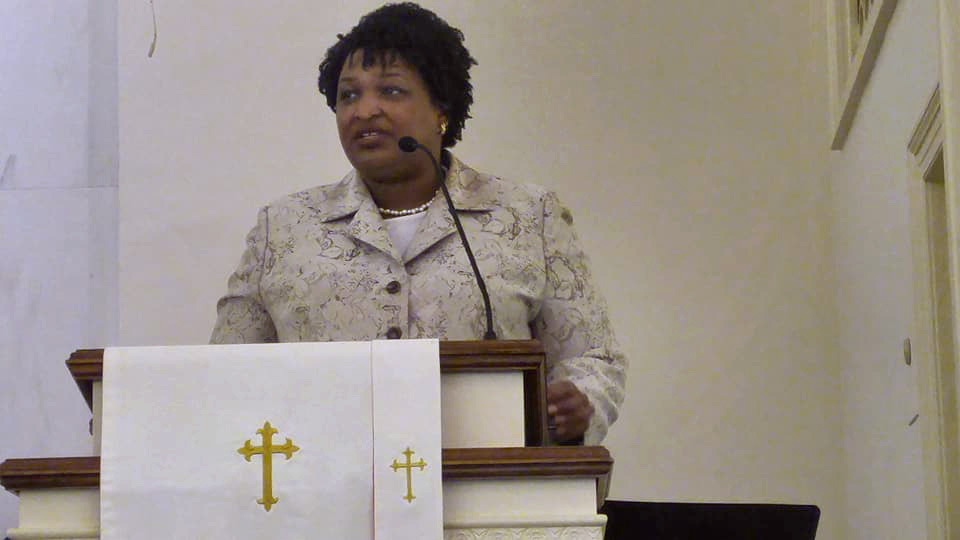 Stacey is a member of Columbia Drive United Methodist Church and the Rev. Ralph Thompson is her pastor.

“I am extremely proud she has chosen this life of service,” Thompson said. “I am proud of the way she lives out Christian principles, she is dedicated to service, not too busy to serve.”

He said he is encouraged by the “groundswell” of support for her.

“There is great excitement that her campaign has generated. With very impressive numbers, she won the Democratic primary. It will be a very tough race, but all races are tough,” he said.

Abrams will face the winner of a July 24 runoff for the Republican nomination between Lt. Gov. Casey Cagle and Secretary of State Brian Kemp. Cagle is a Baptist and Kemp belongs to an Episcopal church.

Georgia has never elected a female governor. Only two African-Americans have been elected governor by voters: L. Douglas Wilder in Virginia in 1989 and Deval Patrick in Massachusetts in 2006 and again in 2010.

All the Abrams children have succeeded. Carolyn said at one point there were four members of the family in college at the same time.

“All my children grew up doing community service. They knew their job was to go to church, learn all they could, stay close to God, to strengthen their faith and go to school. School was their primary job,” she said.

Stacey received degrees from Spelman College, the LBJ School of Public Affairs at the University of Texas and Yale Law School.

“Stacey didn’t just begin to think about this (running for governor) yesterday,” her mother said.

Stacey became the first woman to lead either party in the Georgia General Assembly and the first African-American to lead in the House of Representatives.

Carolyn said when her daughter told her she was thinking of running for governor, she asked “Have you counted the costs? She told me, ‘Someone has to do it mother, why not me?’”

Stacey said she is very fond of the Book of Esther because it is about the responsibility of leadership, the obligation to think about those who are vulnerable and need protection, about tough times and hard choices.

“It is helpful that she is a woman who manages to navigate all those tasks,” Stacey said.

The Rev. Thompson said Stacey’s walk and talk are congruent.

“I am excited because I believe we are talking about the next governor of the great state of Georgia and I am happy to watch her fulfill what I think will be a wonderful office for the people of Georgia,” he said.

Her parents think so also.

“Her father and I are proud of her, behind her, believe she is going all the way. This is one of those times when I say God does not begin a work without bringing it to completion. What she has set out to do will culminate in her being the first African-American woman governor of Georgia.”

Speakers at the 55th General Meeting of Black Methodists for Church Renewal were leery of what a possible splintering of The United Methodist Church will mean for Black churches, based partially on the results of past mergers and splits.
Faith Stories