On May 20, the Connectional Table designated $100,000 of the denomination’s contingency funds — with the possibility of an additional $100,000 next year — to help United Methodists stand with immigrants.

The day before, the group joined the denomination’s Council of Bishops in backing “A Global Migration Sunday Offering,” to raise still more funds, which will directly aid migrants and refugees.

The group set the date for the special day of prayer and offering for migrants to be the first Sunday of Advent, Dec. 3 this year. That means the collection will occur during the season when Christians around the world remember that even Jesus and his family were at one time refugees on the run from political violence. 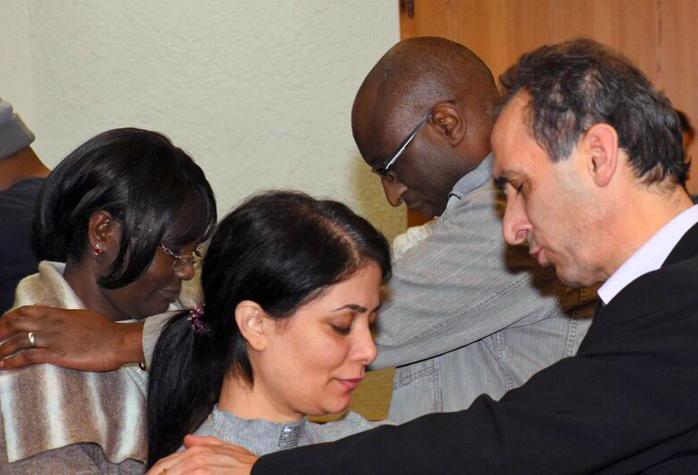 The Connectional Table is a 64-member international body of clergy and laity that coordinates mission, ministry and resources at the denominational level. It has the authority to distribute money from the denomination’s World Service Contingency Fund to help special projects.

Both the advocacy work and the Advent offering are intended to address an increasingly pressing need.

War, famine and economic upheaval mean more people are on the move than at any time in world history.

According to the United Nations, some 65.3 million people are not living in the country of their birth. Of those individuals, the United Nations recognizes 21.3 million as refugees — people who would face serious threats to their life or freedom if they returned to their home country.

For the church, such migration poses both a huge moral challenge — and a chance for revitalization, Connectional Table members said.

“I think this is something we can rally around,” Thomas Kemper told United Methodist News Service. He is the top executive of the United Methodist Board of Global Ministries, the denomination’s mission agency, and a nonvoting member of the Connectional Table.

If you want to spread the good news of Jesus Christ, he added, welcoming the immigrant is a good place to start.

The Connectional Table, meeting May 17-21 in Oslo, Norway, approved the following disbursements from the World Service Contingency Fund.

All contingency-fund recipients must report to the Connectional Table on the results of how the money was used.

The United Methodist Church would not have its growing congregations in Vietnam today without the warm welcome U.S. church members offered Vietnamese refugees, Kemper said. Those refugees, in turn, helped bring the Wesleyan flavor of Christianity to their land of birth.

That revitalizing trend continues in other ways. The Rev. Jacob Dharmaraj, president of the National Federation of Asian American United Methodists, said that Nepali refugees recently started a United Methodist congregation in Syracuse, New York. The church is averaging more than 60 in attendance.

He added that there are now so many United Methodists from the Middle East, they have their own caucus group.

“When we talk about creating 1 million new disciples and starting new congregations,” he said, the denomination’s work with immigrants “is one of the best things that’s happened.”

The Advent offering will go to the denomination’s Global Migration Advance (No. 3022144), a fund set up in 2014 for donors to designate gifts specifically to support migrants around the globe.

Kemper stressed that this is not a “Special Sunday” — special offerings the denomination collects each year. For now, the request is only for a one-time collection — not unlike what many churches do in response to a natural disaster.

The $100,000 in contingency funds will go toward organizing advocacy work in U.S. annual conferences and jurisdictions, said the Rev. Lyssette N. Perez. She is a Connectional Table member, pastor in New Jersey, and the president of MARCHA, the denomination’s Hispanic/Latino caucus.

“Right now, the majority of people are working on their own, and we need a way of coordinating together,” Perez told UMNS.

“Many of our churches provide services, but they aren’t organized to change the law and change the environment for immigrants in their communities.”

Monalisa Tui’Tahi, a Connectional Table member who is also an immigration attorney in Los Angeles, said the rise of deportations in the United States has created a crisis. But the church can help.

“There are parents who stay awake at night wondering what will happen if they go to work in the morning and they don’t come home,” Tui’Tahi told the Connectional Table. She also represents the Pacific Islanders National Caucus of United Methodists.

“It’s for those parents we want to say that we have a clinic where we can help you write out a power-of-attorney so if you get picked up, someone can pick up your kids at school.”

The United Methodist Board of Church and Society, in consultation with the denomination’s Immigration Task Force, initially asked for $200,000 in contingency funds for the advocacy work.

The Connectional Table’s budget advisory team recommended instead granting half the request with the expectation that immigrant advocates will request more funds in a year. By then, the budget team expects, the advocates will be able to report results and buy-in from leaders across the denomination.

“We felt like this would get it started, the proof will be in the pudding and then they will come back,” said Dave Nuckols, a Minnesota lay leader and the Connectional Table’s treasurer.

Wisconsin Area Bishop Hee-Soo Jung, president of the Global Ministries board and a Connectional Table member, emigrated from Korea to the United States in 1982.

He said he always has considered himself “the fruit of American mission” and wanted to bring that missionary fervor back to the United States as an immigrant-community leader.

“We are facing such a radical challenge in global migration, but I think the church is able to make this journey together.”

The United Methodist leadership body that coordinates denomination-wide ministries is looking to shrink its size and become more global in membership.
Global Health

The Connectional Table, which acts as a church council for the denomination, boosts United Methodist efforts to get people around the globe inoculated against COVID-19.
Mission and Ministry