The conflicts, the numbers, the news coverage, the politics — every aspect of what is happening to refugees and migrants signals a global crisis.

Through discussion and action, the United Methodist Board of Global Ministries reflected its own concerns about migration during its April 20-22 spring meeting.

Thomas Kemper, the agency’s top executive, devoted his address to the topic and explored the ways in which the 65.3 million displaced outside their home countries — of whom 21.4 million are recognized as refugees by the United Nations — both challenge and bless the church.

It’s a story that dates back to Abraham and Sarah, he said, and today, “migration is really on the hearts and minds of many of us.”

Five United Methodist conferences handling major disaster response projects and four church-related health boards in Africa will receive new grants from the United Methodist Committee on Relief. The approvals came when UMCOR’s board of directors met during the April 20-22 meeting of the United Methodist Board of Global Ministries, the relief agency’s parent organization.

New York Area Bishop Thomas Bickerton pointed to the “theology of mission” statement for Global Ministries, which frames the agency’s role within the denominational mission to make disciples of Jesus Christ for the transformation of the world.

“Are ‘we ready to cross every boundary to call for true human dignity among all peoples?’” asked Bickerton, quoting the statement. He is president of the United Methodist Committee on Relief, a part of the mission agency.

Global Ministries set the stage for further work on migration with two meetings at the end of March. An all-day seminar for mission staff and United Methodist partners was followed the next day with a meeting for representatives of 10 United Methodist agencies and church partners to discuss how to work together to assist the record number of displaced people worldwide.

One outcome, Kemper told directors just before the board meeting’s conclusion, is a proposal to declare a “migration day” for the entire denomination.

San Francisco Area Bishop Minerva Carcaño, who leads the denomination’s Immigration Task Force, will present a resolution about the migration day to the Council of Bishops, when it meets April 30 to May 5 in Dallas. Kemper will discuss the proposal with the Connectional Table when it meets mid-May in Norway.

“In all United Methodist churches — in Africa, the Philippines, Europe and the United States — we would have a day where we celebrate migration, the challenges and the blessings,” Kemper said.

The Upper Room would prepare worship resources in different languages for the observation, he added, and churches would receive an offering for UMCOR’s Global Migration Advance.

During the spring meeting, UMCOR directors approved the allocation of more than a half million dollars, some of it from the Global Refugee/Migration Advance #3022144 to address U.S. immigration and refugee advocacy work.

“I think matters of immigration have always been of deep importance,” Bickerton told United Methodist News Service. But the fears around global terrorism and concern over decisions by world governments heightens the awareness “that those who are vulnerable are very afraid and very much in need” to a crisis point, he noted.

Church World Service, a United Methodist partner and one of nine federally recognized refugee resettlement organizations, will receive a $250,000 UMCOR grant for expenses related to refugee support services. The Rev. John McCullough, a United Methodist pastor, leads the ecumenical agency, which has helped more than 850,000 migrants resettle in the U.S. since 1946. 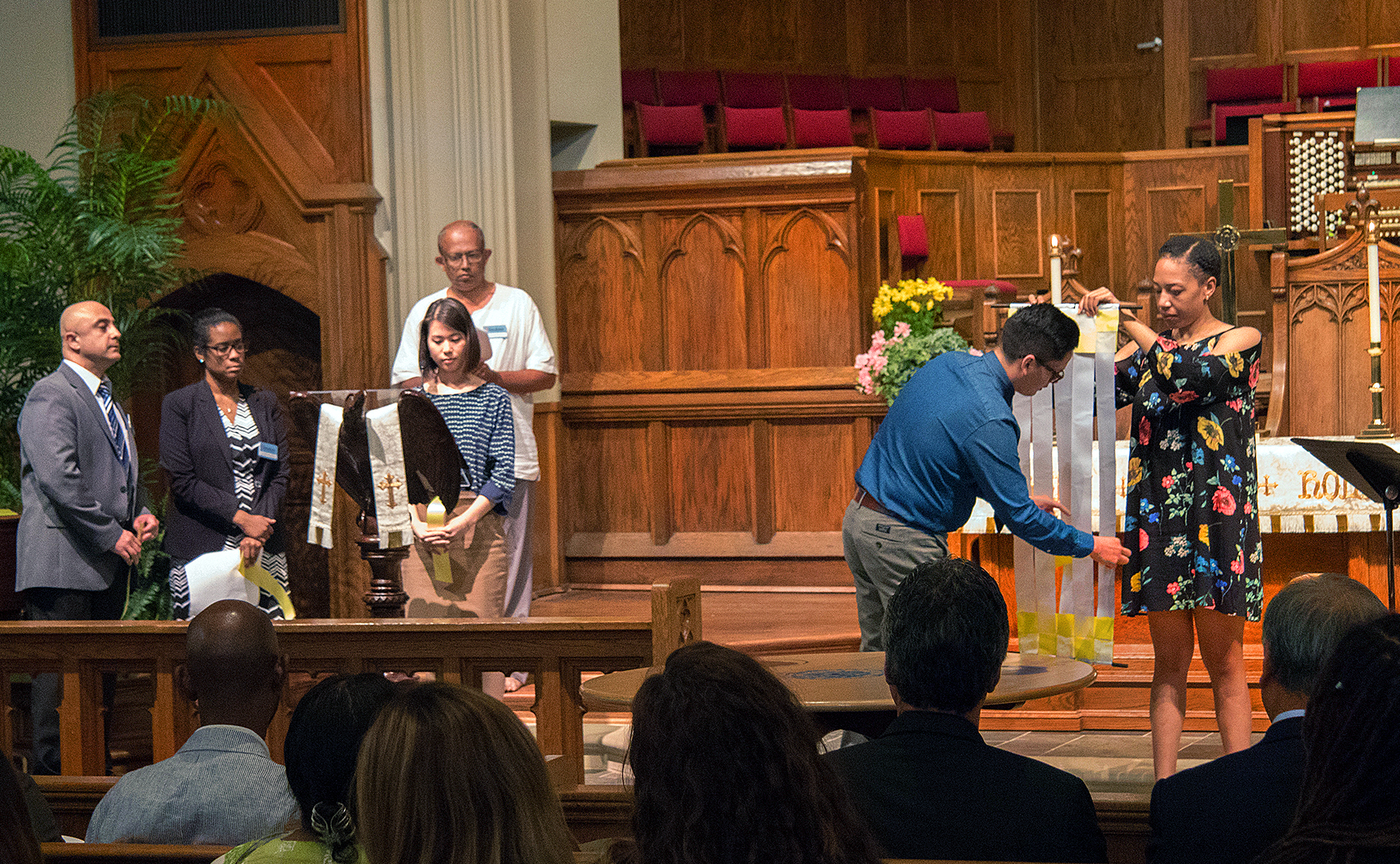 The sanctuary of Grace United Methodist Church, part of the new Global Ministries headquarters in Atlanta, was the setting for opening worship of the mission agency’s spring board meeting. Photo by Cindy Mack, GBGM.

To date, Church World Service has resettled 42 percent of the 4,517 individuals it was to receive in 2017. Nevertheless, the group was forced to reduce its staff by 547 members, the majority in Kenya at the Resettlement Support Center Africa, because of the effect of the executive order on its budget.

Another $301,648 grant from UMCOR’s undesignated funds was approved to support action related to a grassroots, ecumenical initiative from Church World Service and the National Council of Churches to “Protect Welcome and Restore Hope.” The United Methodist Church signed the initiative.

National Justice for Our Neighbors, an independent nonprofit funded and owned by UMCOR, will receive a $150,000 grant to further respond to the U.S. immigration crisis by expanding its network in 2017.

In a report, John Redmond, president of the National JFON board of directors, pointed out that two new sites had joined the network in the past three months, increasing the total to 17 independent sites that operate 45 clinics nationwide.

“We want to have a JFON site wherever it is that you live,” Redmond told the UMCOR directors. “If you took a dart and threw it at a map of the United States, it doesn’t matter where that dart lands, there’s a desperate need for quality immigration legal work.”

A new JFON site does not receive approval until it is financially sustainable, Redmond said, but the $150,000 grant will “allow us to work with many new sites.” That is particularly helpful with the caseload for 2017 already “way ahead of last year.”

When a JFON clinic accepts a new client, it’s a long commitment. “To this point, if we take a client on, the average wait between the client interview and getting that client to an immigration court is a year and a half,” he explained. “It’s not unusual for these things to drag on for six, eight, 10, 12 years.”