“Dear 8-pound, 6-ounce newborn infant Jesus, don’t even know a word yet, just still a little infant so cuddly but still omnipotent, we just thank you for all the races I’ve won and the $22.1 million — love that money.”

In the comedy “Talladega Nights,” Ricky Bobby takes some well-deserved chiding for praying to “Christmas Jesus” rather than “Grown-up Jesus.”

Behind the joke is a theological lesson.

“It does seem like praying to cuddly infant Jesus is a convenient way for the character Ricky Bobby to ignore some of Jesus’ teachings that push against some of the other things he says (and even prays for),” said Susan E. Hylen, a New Testament professor at United Methodist Candler School of Theology in Atlanta. “Jesus’ teachings against the love of wealth come to mind.”

Especially at Christmastime, it’s easy to be a bit like Ricky Bobby — imagining Jesus simply as a sweet babe bestowing worldly blessings.

“Perhaps we should also wonder if we love the Christmas Jesus because we are not challenged by the message we hear at Christmas,” Hylen said.

If anything, scholars say, Christmas should remind us just how radical God’s arrival in the world is. Even in the nativity, Jesus turns worldly notions of power and justice upside down.

Sondra Wheeler, Martha Ashby Carr Professor of Christian Ethics at United Methodist Wesley Theological Seminary in Washington, puts it this way: “In truth, I think we should be shocked, and even a little terrified by the whole notion of God taking on vulnerability.” 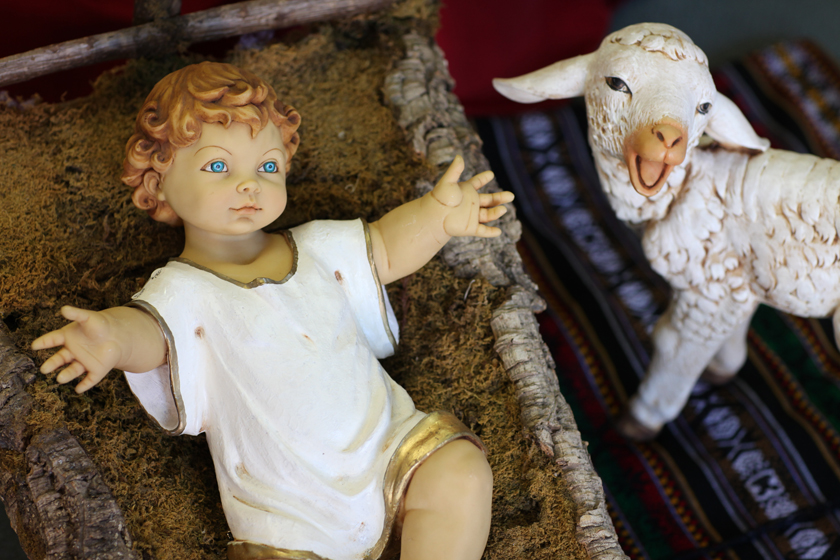 For Hylen, one of the most striking things in Matthew and Luke is just how dependent on humans Jesus was — even before his birth.

Luke tells how Mary welcomes the angel’s birth announcement, and Matthew details how Joseph accepts Jesus because of an angel in a dream.

However, Matthew, in particular, makes clear that Mary’s pregnancy was a scandal that could have ended her betrothal to Joseph — a break tantamount to divorce in their culture. Worse yet, if Joseph had complained to the religious authorities, he could have put Mary at risk of stoning for adultery.

“Both had good reasons not to welcome this fragile yet powerful life, and it would have been possible for them not to,” Hylen said. “But in the end they chose to do as the angel asked.”

Julie Dotterweich Gunby, a nurse midwife in Athens, Georgia, works mainly with uninsured mothers. Her clients generally have a lot more in common with lowly Mary than the wealthy Rick Bobby.

Yet, it was among the marginalized rather than the McMansion set where God sought and found home.

“I think of Jesus needing the hospitality of a woman’s body and nursing,” said Dotterweich Gunby, who is also mother of three and wife of a United Methodist pastor. “That is one of the things that God allowed himself to experience.”

She pointed out that one of the first physical needs all newborns have is for warmth. Mary takes care of that need too, wrapping the babe in swaddling clothes.

“In some ways it sounds kind of heretical to talk about God having lack, but that’s part of the scandal of the Incarnation, that God knows want and has needs met.”

Bringing Jesus into the world required human effort and kindness. Sadly, as Matthew tells it, his arrival also was accompanied by great human loss.

In all the excitement about angelic dreams and visiting magi, Althea Spencer-Miller — a New Testament professor at United Methodist Drew Theological School — urges Christians not to overlook Herod’s savage reaction to news of a coming Messiah.

In a move reminiscent of the pharaoh of Exodus, the wicked king orders the murder of all children in Bethlehem and surrounding areas who are 2 and younger. Matthew, quoting Jeremiah, describes the parents’ cries for their lost children.

Meanwhile, Joseph — on angelic advice — has fled with his wife and young child to Egypt. Spencer-Miller, like many Christians, thinks of Matthew’s account when she sees images of today’s refugees fleeing violence and oppression. “This is the story of a family running for their lives from authorities,” she said.

The Roman Catholic Church annually remembers Herod’s “slaughter of innocents” on Dec. 28. Spencer-Miller urges all Christians to remember the children whose parents didn’t have the power to protect them from Herod’s political might.

“It troubles our complacency that the birth of Jesus is all about joy and a wonderful gift to the world,” she said. “It draws our attention to those who sacrifice ultimately for the good that is to come. Jesus is not the only one who gives his life.”

Wheeler, the Christian ethicist, sees Herod’s massacre as “a reminder of the brutal lengths to which power will go in its own defense, then as now.”

Yet, even in a world of tyranny and slaughter, God chooses weakness.

JoAnn Hall, a member at Trinity United Methodist Church in Smithfield, Va., purchased her favorite nativity set during her first mission trip to Haiti. She has since purchased others on subsequent trips for friends and family. The photo is cropped from the original. Photo by JoAnn Hall.

Get beyond the Christmas carol imagery of singing angels and silent nights, and God’s saving work looks like a “crazy strategy,” Wheeler said.

“If you were God and your aim was to overcome evil in the world and redeem creation, would this be how you approach it?” she asked.

She admits to having a lot of sympathy for Jews like the Zealots who, confronted with the occupation of Rome, expected their Messiah to come with a plan for conquest, not crucifixion by that same occupying power.

Faced with the real hatred in today’s world, Wheeler is also sympathetic to fellow Christians who want Jesus to return now and take names.

Confronted with grave injustice, she said: “We honestly want to call out the Marines.”

However, suppressing evil with the threat of superior force only offers a temporary respite, she said. Sooner or later, the cycle of violence will continue.

“If you ask me as an ethicist, ‘What does the nativity teach us?’ That God is operating with a whole different understanding and idea of what the conquest of the evil looks like.”

When reflecting on baby Jesus, Wheeler suggests heeding the words not of a fictional racecar driver but of Christian novelist Graham Greene: “You cannot conceive, nor can I, of the appalling strangeness of the mercy of God.”

Hahn is a multimedia news reporter for United Methodist News Service. Contact her at (615) 742-5470 or [email protected]umcom.org.

The focus of Advent is preparing for the return of Christ at the culmination of all things.
Local Church