United Methodist bishops received a sobering message during their autumn meeting. Without any changes, the fund that supports their work will run out of money in five years.

“Something else is going to have to happen for us to be able to balance the budget,” said Rick King, chief financial officer of the denomination’s General Council on Finance and Administration. “The reserves, at the current collection rate, are essentially gone by the end of 2024.”

King gave an overview of general church finances at the end of the Nov. 3-6 meeting of the Council of Bishops at Lake Junaluska Conference and Retreat Center in North Carolina.

Giving to the general church, King said, is down across the board.

When United Methodists in the U.S. give to their local church, expenses typically are allocated this way:
• 85% remains in the local church.
• 7% goes to jurisdictions, annual conferences and districts.
• 6% second-mile giving (for efforts such as disaster relief or Special Sundays).
• 2% general church apportionments.
Source: UMCGiving.org
Overall, the seven general funds have received about $7.8 million less through October than they had at the same point in 2018. That represents a decrease of about 4 percentage points from last year, King said.

The Episcopal Fund alone is down about $1.1 million compared to the same time last year, he said.

To put that in perspective, the collection rate for total general church apportionments dropped to 84 percent in 2009, the last low point in United Methodist giving. That was during the recent global economic recession. UM News is supported by the World Service Fund, one of the seven general church funds.

The Episcopal Fund was the focus of King’s presentation to the bishops.

The fund covers the costs not only of bishops’ compensation but also their office staff, their ecumenical staff, their travel and their twice yearly meetings such as the one at Lake Junaluska.

Bishops don’t have a lot of ways to cut costs, King said. Some 81% of the Episcopal Fund's total spending covers salaries, benefits, offices and housing, he said.

However, he also noted that any increases in giving could have a big impact.

King said every 1% change in the collection rate for the Episcopal Fund equates to about a $1 million over a quadrennium — the four-year period between regularly scheduled General Conference sessions. 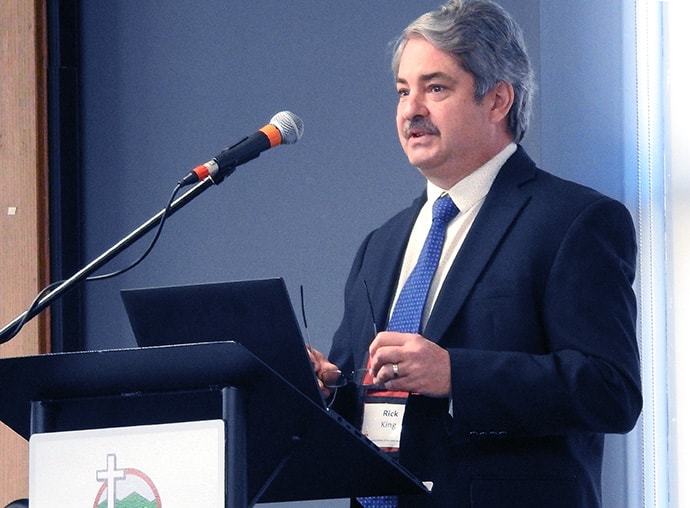 Rick King, chief financial officer of the United Methodist General Council on Finance and Administration, gives the denomination’s bishops a report on the fund that supports their work during their meeting in Lake Junaluska, N.C. Photo by Sam Hodges, UM News.
After King’s presentation, Bishop Michael McKee told those gathered that their challenge goes beyond raising support for the Episcopal Fund.

“It includes our work with the agencies and what agencies do on our behalf,” McKee, the president of the General Council on Finance and Administration board, told the bishops. “It affects our mission as a global church.”

McKee, who also leads the North Texas Conference, acknowledged his own conference has struggled with paying its apportionments.

In part, he said, the decline in giving is a response to the contentious special General Conference that in February passed legislation to tighten restrictions related to LGBTQ people. However, he added that the drop is also because people don’t see the importance of the apportionment system.

Bishop Minerva Carcaño, who serves with McKee on the finance agency board, added that there are economic struggles in many of the areas the bishops serve.

“But I believe what we are seeing is an expression of political opinion or opinions,” she said. Carcaño leads the California-Nevada Conference, whose leaders have strongly argued against withholding apportionments.

“This is not an expression of the capacity of The United Methodist Church because God is generous toward us.”

A new U.S. study from the Lake Institute on Faith and Giving at Indiana University’s Lilly Family School of Philanthropy found that declines in worship attendance don’t automatically correspond with declines in revenue. Congregations continue to receive the largest percentage of charitable giving in the U.S., said National Study of Congregations’ Economic Practices.

In 2017, the study said, about 48% of U.S. mainline Protestant churches reported growth in revenue and another 14% reported revenues had remained the same.

United Methodists in the U.S. support the bulk of general church funds.

Bishop John Schol, who leads the Greater New Jersey Conference, said after the finance report that bishops should keep in mind that general church funding is apportioned to annual conferences — not local churches.

“We have the responsibility to raise the general church apportionments,” he said to his fellow conference leaders. “It’s not a pass-through. Our job is to raise the funds.”

However, he added, that he knows many local churches have been masking financial troubles by dipping into reserves or selling property.

“I want people outside the United States to understand that the money in the U.S. is not what it once was,” he said.

The General Council on Finance and Administration, at this point, is proposing to the 2020 General Conference a $493.8 million general church budget — the denomination’s smallest in more than 20 years.

As part of the budget, the other six funds are seeing anywhere between about a 16% to 87% budget cut compared to the 2017-2020 quadrennium.

The Episcopal Fund is the only one with any proposed increase — 6.7%. That’s because the 2016 General Conference instructed the denomination’s finance agency to budget for five additional bishops in Africa.

“We are in covenant with each other about promoting the general funds of the church,” McKee reminded his colleagues.

“Frankly, we need to engage that seriously over the next couple of months so that we can finish the year in a better spot than what we are projecting at this time.”

United Methodist leaders agree that big changes are coming as the denomination grapples with rising church disaffiliations. But disagreements remain on how best to balance financial uncertainty with missional commitments.
Theology and Education