Citing Romans 12:1-5 and John Wesley’s view “On Schism,” the California-Nevada Conference Cabinet said disaffiliation of the Western Jurisdiction from The United Methodist Church is not the answer and that withholding apportionments is an expression of white privilege that could lead to lives being lost.

The cabinet issued a statement after a retreat in which the leaders reviewed the actions and discussions of the annual conference session.

During the California-Nevada Annual Conference, a recommendation for redirecting general apportionment dollars was discussed and defeated.

Inflicting financial punishment on United Methodists in Africa and the Philippines because they support the Traditional Plan is a clear violation of the first General Rule to “Do no harm,” the statement reads.

“To function under the assumption that the Central Conferences are completely beholden to the U.S. church is a de facto admission of a neo-colonial posture,” the statement said. “In addition, attempting to control Central Conferences through withholding funds is manipulative and coercive. In fact, this withholding is primarily expressed in Caucasian congregations whose perception is that their entitlement to control others with money is an expression of white privilege.”

Central conferences are church regions in Africa, Europe and the Philippines.

The statement points out that withholding funds places lives at risk when dollars are denied for education, disaster relief, medical assistance, feeding the hungry and many more areas of concern.

The annual conference approved a resolution asking the Western Jurisdiction College of Bishops to call a special session of the jurisdictional conference.

“The California-Nevada conference approved a resolution requesting the College to consider calling a special session of the Jurisdictional Conference. The conference didn’t discuss the topic suggested for that special session, which would be disaffiliating the Western Jurisdiction from The United Methodist Church,” said the Rev. Jorge Domingues, executive director of connectional ministries.

The release of the statement came under fire on social media.

“The statement from our Bishop and Extended Cabinet is remarkable for its failure to acknowledge the ongoing harm done to LGBTQ persons across our global connection and the anguish felt by many faithful United Methodists, who are unwilling to simply bury their heads in the sand and hope for unity,” said Randall Miller, a jurisdictional conference delegate, to UM News.

“Additionally, whatever the merits of the arguments presented in this statement, shutting down collective conversation about these very serious matters is never a productive way forward,” Miller said. 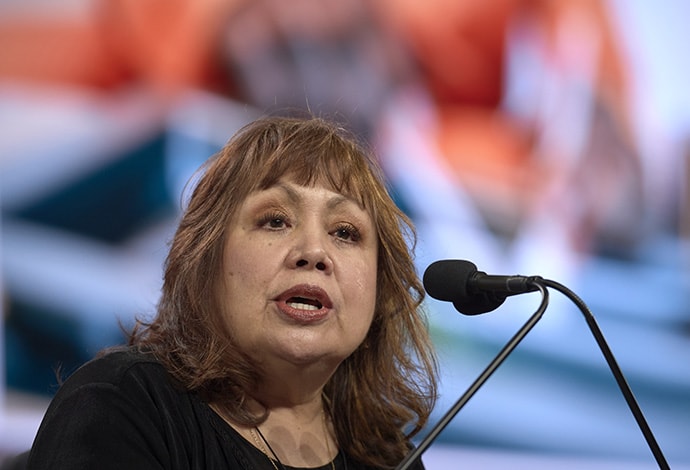 Bishop Minerva Carcaño speaks during the opening session of the General Conference of The United Methodist Church in St. Louis in February 2019. Carcaño is bishop of the California-Nevada Conference. File photo by Paul Jeffrey, UM News.

Most of the annual or regional conferences in the U.S. have met and a number of them are offering petitions to the 2020 General Conference that reject the Traditional Plan passed by the 2019 special called General Conference.

The Book of Discipline, the United Methodist policy book, says that the practice of homosexuality “is incompatible with Christian teaching,” and bars “self-avowed practicing homosexuals” from ordination. Despite passage of the legislation during General Conference 2019 that retains church bans on ordaining gay clergy or same-sex marriages and strengthened enforcement measures for violating those bans, resistance has been strong.

California-Nevada ordained, commissioned or licensed six gay clergy. In addition, LGBTQ people have been commissioned, ordained or licensed in the Baltimore-Washington, Michigan, New York, Northern Illinois, Oregon-Idaho, Desert Southwest and Mountain Sky conferences in the past month. North Texas also ordained an openly gay pastor, but she is single and so Bishop Michael McKee said her ordination does not violate the Book of Discipline.

Bishop Minerva Carcaño and the nine members of her cabinet concluded that disaffiliation would not fulfill the promise of the Wesleyan spirit and Methodist ethos, or the calling to leadership as a jurisdiction.

“Disaffiliation is contrary to every fiber of Wesleyan theology. As Wesleyans ours has always been a dynamic faith, not one of dogma and ideology,” the statement read.

The statement said schism is what some members of the Wesley Covenant Association and the Institute for Religion and Democracy have been planning for almost 40 years.

Facilitating their exit should be the primary goal, reads the statement.

The Rev. Jeff Greenway, council chair of the Wesley Covenant Association, said the organization had no desire to split The United Methodist Church.

“Since the WCA’s inception in 2016, our deepest desire has been for the bishops, clergy and laity of The United Methodist Church to abide by our polity and restore the good order of our connectional covenant,” Greenway said.

“The months following the special called General Conference in St. Louis has made it clear this is not possible. Our denomination is composed of persons holding divergent views on a wide variety of topics that includes, but is not limited to, human sexuality. We believe these views make holding the denomination together untenable. We add our voices to a growing and diverse chorus of United Methodists who are calling for a different way to live into the future where we can stop hurting each other and live in integrity,” he said.

“We continue to call for persons of good faith from divergent perspectives to find a way to stop the fighting and allow different expressions of Methodism to be born out of this crisis. The WCA is prepared to support that kind of effort if it is fair, gracious and generous,” said Greenway, who is also pastor of Reynoldsburg United Methodist Church in Ohio.

John Lomperis, director of UM Action of the Institute on Religion and Democracy and a lay delegate to the 2019 General Conference, said it is not true that IRD planned for splitting the church.

“From its very beginning, the vision of IRD’s UM Action program has been for our beloved denomination to be renewed in faithfulness to our official Doctrinal Standards and our very Wesleyan covenants, which must form the basis of any meaningful church unity, and renewed in disciple-making effectiveness. This remains what we hope for,” he said.

“I do appreciate how this statement calls out the essential neo-colonialism of other liberal American leaders who have recently openly talked about using their wealth and privilege as weapons of coercion and punishment against central conference brothers and sisters who dare to think for themselves,” Lomperis said.

The bishop and cabinet said they released the statement because they believe this is a “Kairos moment in the life of the broader church.”

California is continuing to deal with storms causing devastating floods, and it’s still too soon to assess the scope of the damage. But United Methodists are already doing what they can to help.
Annual Conferences