Faced with the fallout of a divisive General Conference, United Methodist bishops said they would join other church members in exploring new possibilities for the denomination’s future.

But at this point, they see their role more as listening rather than directing the church’s conversation.

“There is a sense among the council that we are in untenable times,” said the Council of Bishops in a May 9 statement to the church. “To this end, the council is exploring models and plans of new forms of unity.”

The bishops spent much of their May 4-9 meeting in closed session processing what happened at February’s special session of the denomination’s top lawmaking body.

They also worked on drafting their pastoral letter to a multinational denomination that could be heading toward a breakup over differing views of the role of LGBTQ people in the church.

“The whole council is called to a season of deep listening,” the bishops’ letter said. “We grieve the brokenness in our relationships and confess that we are complicit in this.”

The bishops took other actions related to the special General Conference in St. Louis.

The bishops also agreed to collaborate with the denomination's Connectional Table on a move toward having a new U.S. structure that deals with solely U.S. issues.

Three years ago, General Conference delegates asked the bishops to find a way for the church to stay together amid intensifying disputes regarding LGBTQ inclusion and biblical interpretation.

But in February, a majority of General Conference delegates rejected the One Church Plan recommended by a majority of bishops. That plan would have left questions of ordination up to conferences and same-sex marriage up to individual churches and clergy.

Instead, by a vote of 438 to 384, delegates adopted the Traditional Plan that maintains the denomination’s stance that the practice of homosexuality “is incompatible with Christian teaching” and strengthens enforcement of bans on “self-avowed practicing” gay clergy and same-sex weddings.

Delegates also passed legislation to allow churches under certain conditions and financial settlements to leave the denomination with their property.

Since then, a number of churches and even conferences in the U.S. and western Europe have announced plans to resist the Traditional Plan. Church leaders in church regions in Africa and eastern Europe also have talked of strained relationships with ministry partners in the West.

Denominational giving also is down — especially in the United States, which provides the bulk of funding for general church ministries.

Moses Kumar, top executive of the denomination’s General Council on Finance and Administration, sounded the alarm. He told the bishops that if current giving trends continue through the year, the U.S. collection rate for the fund that supports bishops will drop to 76.3 percent. For the fund that supports the work of most agencies and other global ministries, the U.S. collection rate will be 74.4 percent.

Videos of the meeting

That’s a lower rate than seen in 2009, during the recent global economic recession, when the collection rate dropped to 84 percent.

But amid this turmoil, a number of bishops expressed hope for a brighter, Holy Spirit-led tomorrow.

Bishop Kenneth H. Carter, president of the Council of Bishops, told United Methodist News Service that what he’s hearing from people around the connection is that “God is doing a new thing.”

“Something is dying, and something new is being born,” said Carter, who also leads the Florida Conference. “I don’t meet many people who want to maintain the status quo.”

He said United Methodists struggle being a global denomination that spans the vast economic inequalities and cultural differences among the United States, Europe, the Philippines and Africa.

A number of bishops wished their May 9 statement offered solidarity with the LGBTQ church members who feel harm from General Conference action. 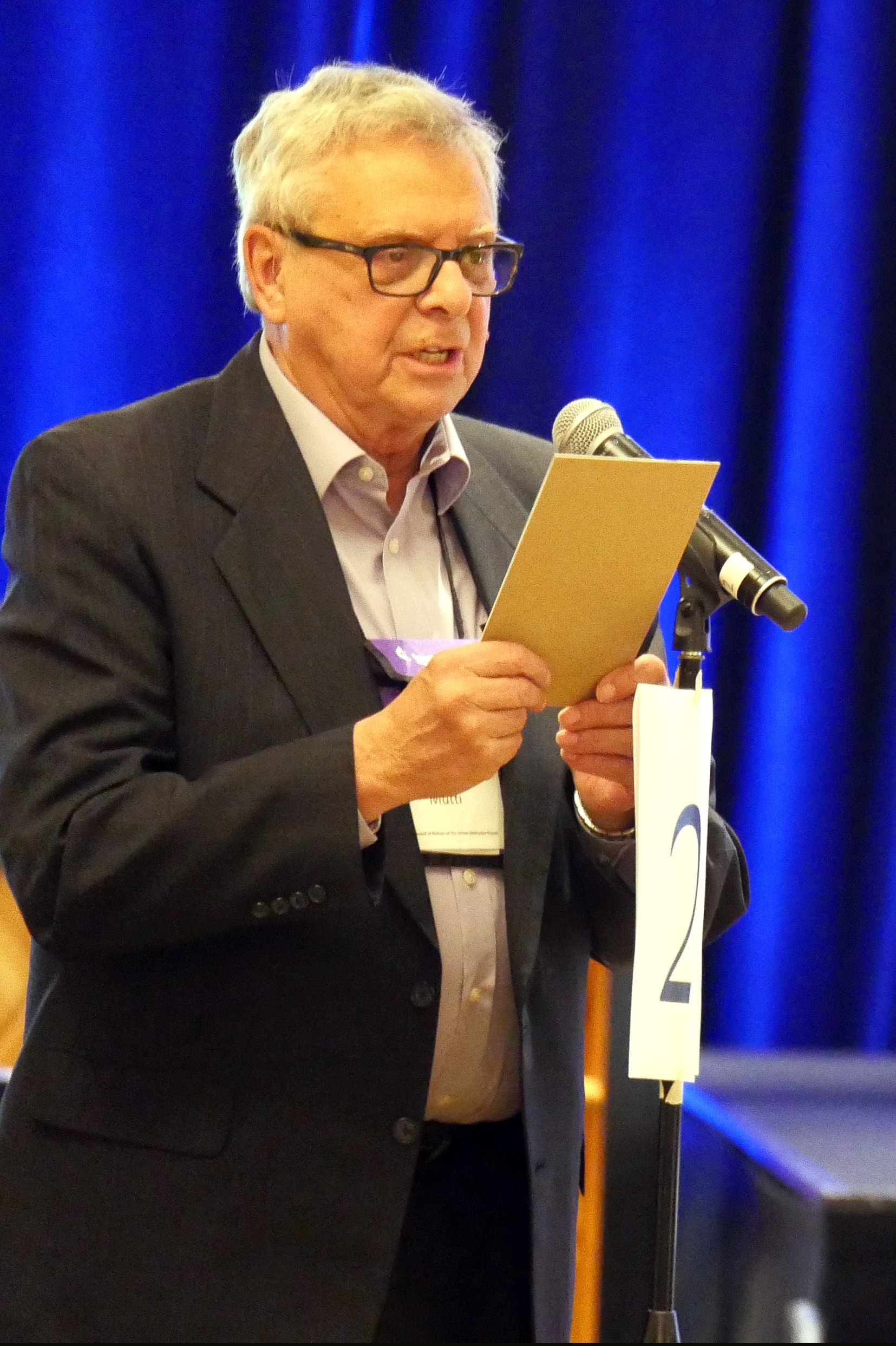 Retired Bishop Albert Frederick “Fritz” Mutti III speaks to the Council of Bishops about his late sons, Tim and Fred, and why he feels called to speak in support of LGBTQ people. Photo by Heather Hahn, UMNS.

Among them was retired Bishop Fritz Mutti. He stood during the May 8 afternoon session to pay tribute to his two gay sons, Tim and Fred, who are now deceased.

“They were baptized in The United Methodist Church, practiced their faith and were called persons of sacred worth. However, the church also declared them incompatible with Christian teaching,” he told his fellow bishops.

“At this time, we want you to know we feel called to stand publicly in support of the LGBT community and we will continue to advocate for them.”

During the May 9 open session, other bishops spoke of their pains and hopes.

Bishop Bill McAlilly, who leads the Tennessee and Memphis conferences, said that bishops will need insight, courage to speak across theological divides and capacity to endure in the days ahead.

He added that he wanted to overcome the notion that “if you are not with us, you are against us.”

“I want to remind myself that Jesus was crucified in the middle at Calvary,” he said. “I believe it is our call to hold this tension so God can show us how he moves in this place.”

Bishop Rudy Juan, who leads the Davao Area in the southern Philippines, noted that his country’s United Methodists have talked in the past about forming an autonomous church.

“But at this moment, we want to walk with you, working to be a church united,” he said.

Bishop Mande Muyombo, who leads the North Katanga Conference in Congo, said since February, it’s been difficult for church members in Africa as well.

It should be noted that both Mandela and Tutu, renowned for their fight against racial apartheid in South Africa, also fought against LGBTQ discrimination.

Still, the strains on unity were apparent even as bishops spoke of their hopes for the church.

Bishop Sue Haupert-Johnson, who leads the North Georgia Conference, expressed her distress that colleagues from Africa, Europe and the Philippines, had forgone a scheduled time of fellowship to meet with a coalition of leaders who advocated the Traditional Plan.

“I think this is an intrusion into our relationship and intrusion into our authority as bishops,” she said. “I desperately want us to represent a church open to all people and when we disagree about theology, we don’t punish each other.”

One thing many bishops agreed on was that the church cannot legislate itself to unity.

“We need more conversation,” he said. “We can always partner together especially when it comes to mission.”

Leaders of traditionalist advocacy groups held a listening session with bishops from Africa, Europe and the Philippines. Church separation was on the table.
General Church