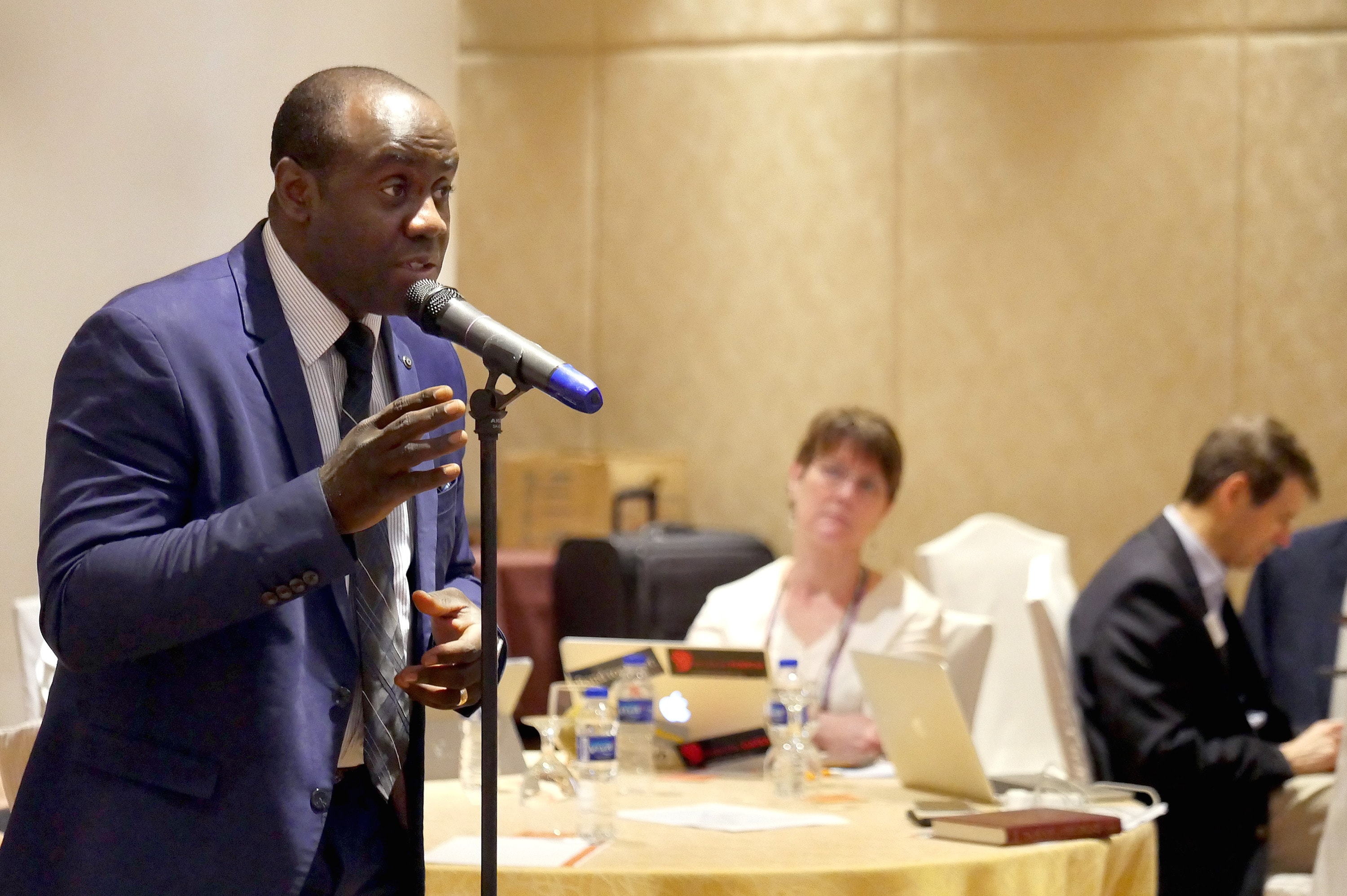 The Rev. Adilson De Almeida of Luanda, Angola addresses fellow members of the Standing Committee on Central Conference Matters, as the Rev. Kimberly Reisman looks on. He and other church leaders at the meeting talked about the fallout of the special General Conference during a March meeting in Manila, Philippines. Photo by Heather Hahn, UMNS.

About a month after the special General Conference, United Methodist leaders from Austria to Zimbabwe were still reckoning with what happened and expressing pain all around.

Members of four denominational leadership bodies took time out of a joint meeting to plan 2020 General Conference legislation to discuss what had just transpired at GC2019. The special session of the denomination’s top lawmaking assembly — intended to find unity amid longtime divisions over homosexuality — seems to have left the denomination even more polarized.

Many of the roughly 75 church leaders gathered also wondered what the special session ultimately means for the future of a denomination struggling to be both democratic and global in nature.

“The question I have is: Can we continue to be a global church?” Bishop Eduard Khegay, whose Eurasia Episcopal Area includes Ukraine, other former Soviet republics and the whole of Russia. “How much unity do we want? How much contextualization?”

The special General Conference, by a vote of 438 to 384, adopted the Traditional Plan that strengthens enforcement of bans on “self-avowed practicing” gay clergy and same-sex weddings. However, the plan is already facing resistance from people who see the measures as discriminatory against LGBTQ churchgoers.

Khegay said his area is getting pushback for its delegates’ support for the Traditional Plan, including people emailing him that they no longer want to support his area financially.

“I find it kind of threatening,” he said. “The question my people ask: Are we a church that wants to support those in need even if they think a different way? Or do we only support those who think like us?”

Simon Mafunda of Harare, Zimbabwe, addresses fellow Standing Committee on Central Conference Matters. After the special General Conference, he said he has heard from Africans who feel like “they are being treated like perpetrators.” Photo by Heather Hahn, UMNS.

Simon Mafunda, a General Conference delegate from the East Zimbabwe Conference, said that in the votes’ aftermath, the Africans he has spoken to feel looked down upon.

“There is also a feeling they are being treated like perpetrators and another group of people are the victims for the simple act of exercising their right to support what they believe,” he said.

Still others observed that the Traditional Plan does more than reaffirm the status quo.

The plan also includes provisions, previously held unconstitutional, that require conferences to certify they will comply with ordination standards related to homosexuality or lose funding and the right to use the denominational logo. The Judicial Council, the denomination’s top court, will review the plan’s constitutionality later this month.

“When the decision was made on the last day, many of our people indicated to me — this is no longer my church. I lost a home in my beloved United Methodist Church,” Bishop Harald Rückert of the Germany Area said. “Not only because of the exclusiveness toward LGBTQ people but because this plan tries to implement a spirit of mistrust and punishment.”

He spoke after the executive committee of The United Methodist Church in Germany announced that it would not impose the Traditional Plan. The committee also said it was forming a roundtable to search for ways to preserve unity.

The General Conference’s Standing Committee on Central Conference Matters — the one denominational leadership body with a majority of members outside the United States — facilitated the Philippines conversation.

“Going into the 2019 meeting in the Philippines, the officers knew that the Special General Conference on homosexuality had changed dynamics and conversation within the worldwide church,” the standing committee's executive committee said in a statement released April 3. “It would be important to provide safe and open space for sharing and listening to each other.”

In addition to the standing committee, the gathering also included the Committee on Faith and Order, the Ministry Study Commission and the Connectional Table.

The groups had come together to work on a long-running project authorized by the 2012 and 2016 General Conferences to determine what parts of the Book of Discipline can be adapted in Africa, Europe and Asia. However, the groups broadly agreed that fallout from GC2019 meant they needed to slow down that work and deal with the trust deficit in the wider church.

Meanwhile, conversations across the multinational denomination are already dealing with possibly splitting the church. Part of the debate is deciding who gets to call themselves United Methodist. Complicating matters is that United Methodists in the U.S., where the denomination began, still fund the bulk of general church operations.

The Rev. Jay Williams, who identifies as a queer pastor, told those gathered in the Philippines: “If exclusion of LGBTQ folks is essential to being United Methodist, then there is no way for us to remain together.”

The Rev. Adilson de Almeida, a delegate from the Western Angola Conference, later told United Methodist News Service he thinks it’s time for people who want to change the policies related to LGBTQ individuals to leave.

“Some people have to go, but they can choose to go in a nice way — not in the way I’m seeing things going,” he said. “That’s an option. I’m sorry if that makes some people unhappy. We have made a decision and it should be respected.”

Khegay told UMNS that something like the One Church Plan would absolutely be unacceptable for the church in Russia, where United Methodists already face restrictions and anything deemed as “propaganda of nontraditional sexual relations” can be fined.

The Rev. Kimberly Reisman, a delegate from the Indiana Conference, spoke to those gathered about her experience as executive director of World Methodist Evangelism that serves the Wesleyan family beyond The United Methodist Church.

Jorge Lockward, an openly gay delegate from the New York Conference, said he thinks the special General Conference “has given us a beautiful gift.”

“It’s the gift of a mirror that shows us where we are,” he said. He said the regional divisions show how The United Methodist Church began as a colonial enterprise.

“We’ve trying to cover that up the best that we can with good intentions and good words,” he said. “But now it’s coming to a head and we need to be honest about that.”

The Wesleyan Covenant Association took the lead in creating the new Global Methodist Church, but WCA leaders say their organization needs to keep fighting for churches wanting to leave The United Methodist Church.