At the start of 2020, the weekly café hosted by a United Methodist congregation in Bremen, Germany, was providing language courses to refugees from all faiths.

Yoshi Kuramoto of Seattle — a Global Mission fellow assigned by the United Methodist Board of Global Ministries — was working with younger refugees at Erlöserkirche Evangelisch-methodistische (United Methodist Church of the Redeemer). Cultural excursions were helping familiarize people with their new environment.

The church in the denomination’s North Germany Conference has offered a host of services to refugees and migrants in recent years. But restrictions imposed because of the coronavirus pandemic ended all that programming in March 2020, says the Rev. Susanne Nießner-Brose, the church’s pastor.

Germany, which has about 1.3 million residents with refugee status, also has become less welcoming, she said.

“Europe is becoming a fortress where desperate people fleeing from war, hunger and persecution are being turned away, even if that means death and risk for their lives,” Nießner-Brose explained. She added the pandemic has worsened that, “so that right now people’s attention is not attuned to the plight of the refugees.”

The migration crisis in Europe is a continuing concern for members of the World Council of Churches, World Methodist Council, ACT Alliance and other faith-based organizations that formed a coalition last fall to deliver an advocacy statement prior to the European Commission’s presentation of the New Pact on Migration and Asylum on Sept. 23.

Refugees approach a beach near Molyvos, on the Greek island of Lesbos, on Nov. 2, 2015, after crossing the Aegean Sea from Turkey. Local and international volunteers welcomed the arriving refugees with food and medical care and dry clothes before the newcomers proceeded on their way toward western Europe. Their boat to Greece was provided by Turkish traffickers to whom the refugees paid huge sums to arrive in Greece. Some seeking refuge in Europe still try to come by sea, despite the dangers. File photo by Paul Jeffrey/Life on Earth.

Their statement urged that solidarity be a guiding principle among nations of the European Union as it moves from a “crisis mode” mentality and works to create regular channels for migration and develop compassionate practices that reflect the EU’s core values.

Retired German United Methodist Bishop Rosemarie Wenner, now the Geneva Secretary for the World Methodist Council, was part of the team that drafted the statement.

While she finds “some positive aspects” in the new pact, Wenner told UM News that its focus on relocation is problematic. “Those countries (that) refugees and asylum seekers are relocated to are either violating human rights … or they are already much more burdened by the need to integrate a huge number of refugees then all of the EU countries.”

The new pact does have “some positive signals,” such as extending family links to include siblings, said Peter Prove, director of the WCC’s Commission of the Churches on International Affairs. But most of the ecumenical community’s aspirations for change have not been realized. “I think it’s safe to say we are far from satisfied with the pact as it has been presented.”

It is evident, Prove added, that “the primary focus is still exclusion and prevention of migration rather than a more humane approach to people on the move.”

Continuing to put the heaviest burden on EU states at points of entry for Europe also is “inconsistent with the very ideal of a unified Europe,” he said.

The Rev. Jack Amick, director of the United Methodist Committee on Relief’s Global Migration program for the Board of Global Ministries, agreed that the overall burden of migration is not falling on Europe.

Of the 72 million displaced, only a small fraction make it to the U.S. or to Europe. “We tend to look at this with a very northern bias,” he pointed out. “About two thirds of the world’s displaced people end up settling in the global south, and most of them are in Africa.”

Amick, who serves on the ACT Alliance Migration and Displacement Reference Group, said he found “some serious deficits” with the New Pact on Migration and Asylum because of its focus on border expediency and processing. If the goal is moving people through Europe or back quickly, he explained, the rights of minors and attempts to keep families together will be challenged or overlooked.

In Germany, Wenner said, a large coalition of churches, non-governmental organizations and civil rights activists are working “for a change for good” and are speaking up against the criminalization of migrants, refugees and those who assist them. Cities have announced that they are “safe harbors” to signal that they are ready to receive migrants currently in camps in Greece or elsewhere.

But another large coalition in Germany views migration as a threat, Wenner added, and insist on keeping refugees and migrants who arrive in Europe in border camps until they are approved or deported.

“The right-wing parties continue to dominate the agenda and parts of the public opinion, even if they are not in power,” Nießner-Brose said.

In 2020, about 60,000 people received asylum there — a tiny number in relation to Germany’s 82 million people and its economic status as one of the richest countries in the world. That total demonstrates the country’s unwillingness to accept larger numbers of refugees, she said. 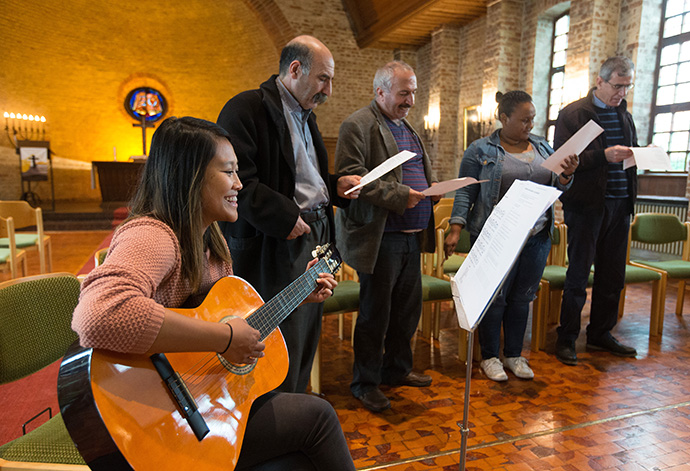 Yvonne Agduyeng (left) helps lead a German class for recent immigrants at the United Methodist Church of the Redeemer in Bremen, Germany, in 2017. The students are singing children's songs in German. Agduyeng was a Global MIssion Fellow of the United Methodist Board of Global Ministries. File photo by Mike DuBose, UM News.

The Bremen church is doing what it can while refugee programming is suspended during the pandemic. The congregation assisted an Iraqi who was shot in his leg at the Croatian border, finding critical medical help. He finally got permission to stay in Germany, the pastor said, but his family must remain in their life-threatening situation in Iraq.

Mediterranean Hope was founded at the height of the refugee crisis in Europe, a few months after 368 migrants died on Oct. 3, 2013, trying to reach the Italian island of Lampedusa.

The numbers fluctuate, but desperate migrants still try to reach Europe by sea. Concern remains over the effects of European Union restrictions on search and rescue efforts for those who get in trouble.

Church representatives from across Europe issued a July 2019 statement expressing disappointment over the EU’s failure to agree on any arrangement for search and rescue procedures.

In the fall of 2020, a rescue ship that had a representative of Mediterranean Hope on board was not allowed to bring its refugee passengers to shore.

“For several weeks, they were stranded at sea without any place to dock,” said the Rev. Jorge Domingues, a staff member of the United Methodist California-Nevada Conference who was following the situation. “That became a moment of high tension.”

Nearly 600 migrants lost their lives at sea in 2020, says Paolo Naso, a Methodist who heads Mediterranean Hope. He wrote about Youssef, a six-month old boy who died in a November shipwreck, another victim of “unscrupulous traffickers who load men, women and children onto unsafe and dilapidated boats with the aim of getting away from the Libyan shores.”

“The real dilemma of Italy and Europe,” Naso added, “is whether to respect international law and support those who save lives at sea or to go along with the populist wind that calls for closed ports and impossible walls along the Mediterranean.”

A 20-year-old Afghan man, who fled to Europe from Iran as a teenager, currently lives in asylum at the church. “We support him with food and help him deal with the bureaucracy,” Nießner-Brose said. “He is safe from deportation unless he leaves the church premises.”

The COVID-19 crisis makes everything more difficult, Wenner pointed out.

“Voluntary support for migrants is limited because of restrictions to meet people and to cross borders,” she explained. “Money, including donations, is spent for immediate needs to assist those who are in financial difficulties because of the pandemic.”

She is encouraged by interreligious cooperation on the migration crisis and by the resilience of migrants and refugees themselves.

In December, Wenner took part in an interfaith consultation of about 160 people on the situation of children on the move in Europe, organized by UNICEF, the World Council of Churches and others.

Churches, faith communities and cities throughout Europe “are ready to accommodate and support unaccompanied minors and migrant families,” she said in her presentation during the event. “Yet governments only allow for a small number of them to be resettled.”

Wenner pointed to the work of Mediterranean Hope and its “Casa delle Cultura” program for refugees in Scicli (pronounced sheek-ly), a historic Baroque town in southeast Sicily, as an example of what churches can do when given the opportunity.

Mediterranean Hope is an amazing collaboration by the Federation of Evangelical Churches in Italy, the Synod of Waldensian and Methodist Churches and the Community of St. Egidio to organize a significant response to the migration crisis.

The Humanitarian Corridors project has allowed more than 2,000 especially vulnerable Syrians to find refuge under a Memorandum of Understanding with the Italian government. Paolo Naso, the Methodist head of Mediterranean Hope, told UM News in 2019 that the goal is to convince the European Union to adopt the model “as the main safe passage to Europe for asylum seekers and vulnerable migrants.”

The Rev. Jorge Domingues, a staff member of the California-Nevada Conference, spent four months in 2017 working with Mediterranean Hope and was one of those greeting 63 people who arrived that year through the Humanitarian Corridors Project.

Now, with fewer new arrivals, he said, some of the focus has shifted to supporting local communities sponsoring those refugees.

That support has been crucial during the pandemic, since many of the new arrivals have health concerns. Domingues said Mediterranean Hope has worked to get proper supplies for protection and testing and is “advocating for those communities to be vaccinated.”

Alessandra Trotta, who leads a seven-member panel that oversees the Union of the Methodist and Waldensian Churches, told the New York Times in December that the corridors were a “winning model” that offers an alternative to unregulated and illegal immigration. The union was created by an integration pact in 1975.

Trotta is the first Methodist to serve as moderator for that panel, called the Waldensian Table, Domingues said.

President-elect Biden promised immigration reform during his presidential campaign. Migrants are writing to him asking that he keep those promises.
Social Concerns

Churches, UMCOR assist those forced from their homes as attacks by Islamist insurgents escalate in in the Cabo Delgado province of northern Mozambique.