A recent fire that destroyed an overcrowded camp for asylum seekers on the Greek island of Lesbos once again exposed “the fundamentally broken state of European migration and asylum policy and the suffering it has created,” says a statement from religious leaders in Europe.

Released Sept. 22 by the World Council of Churches, the advocacy statement noted the frustrations all around, including the desperation of those forced to live for years in inhumane conditions and the anger and frustration of locals dealing with the challenge of reception and care of those individuals.

However, the reaction by the European Union, the statement said, “expresses sympathy but shows no real commitment” to either refugees or their local hosts.

That lack of commitment by European nations is the problem. “Migrants and refugees are human beings, loved by God, and not a threat,” said retired Bishop Rosemarie Wenner of The United Methodist Church of Germany. 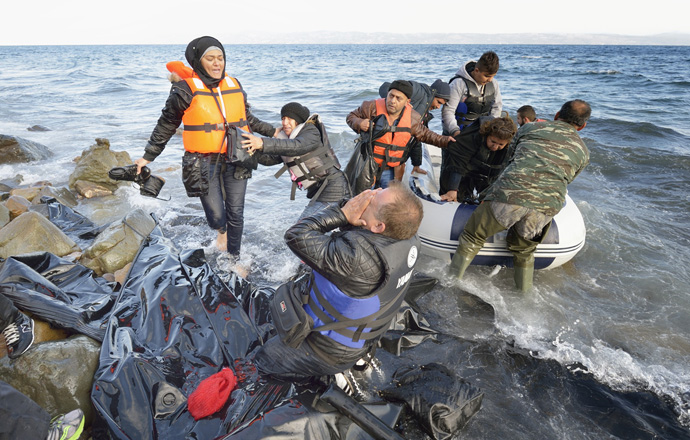 When he landed on the Greek island of Lesbos on Oct. 30, 2015, Nabil Minas, a Christian refugee from Syria, carried his children through the water and left them on the shore, then fell on his face and kissed the ground. The shore where he kneels is covered with the black rubber of deflated refugee boats. Minas and his family came in the boat from Turkey, paying an exorbitant amount to traffickers who provided the transport. File photo by Paul Jeffrey/Life on Earth Pictures.

Wenner, representing the World Methodist Council, was part of the working team that drafted the statement. “Methodists all over the world are committed to welcome strangers so that we overcome the ‘us’ and ‘them,’” she told United Methodist News in an email. “And we join hands with other Christians and all people of good will to advocate for a humane treatment of those at the move.”

A commitment to “radical hospitality” and advocacy on behalf of “the stranger” currently is a central theme for the World Methodist Council, says its top executive, Bishop Ivan Abrahams.

“We continue to work together with everyone, everywhere, in accompanying migrants, refugees and asylum seekers sharing their tears, hopes and dreams for sustainable life and livelihood,” he said.

Stressing the need for solidarity “as a guiding principle,” the Christian communions and organizations directed their statement toward the European Union Commission, which was to present a new Migration Pact on Sept. 23.

“We expect the EU to reject the discourse and politics of fear and deterrence, and to adopt a principled stance and compassionate practice based on the fundamental values on which the EU is founded,” the religious leaders wrote.

As a European citizen, Wenner said she was grateful for the coalition’s engagement with the EU, “urging it to overcome a crisis mode and to create regular migration channels and compassionate practices towards those who come to Europe that reflect the core values of the European Union.”

The Rev. Ioan Sauca, a professor and Orthodox priest from Romania who serves as the WCC interim general secretary, pointed out that everyone is part of a precious human family that is entrusted to care for each other.

“Every nation’s asylum policies must reflect this sense of caring and trust as a shared journey, a solemn responsibility and a common witness,” he said. “We have high expectations of the EU Commission’s presentation of its new pact on migration and asylum on 23 September.” 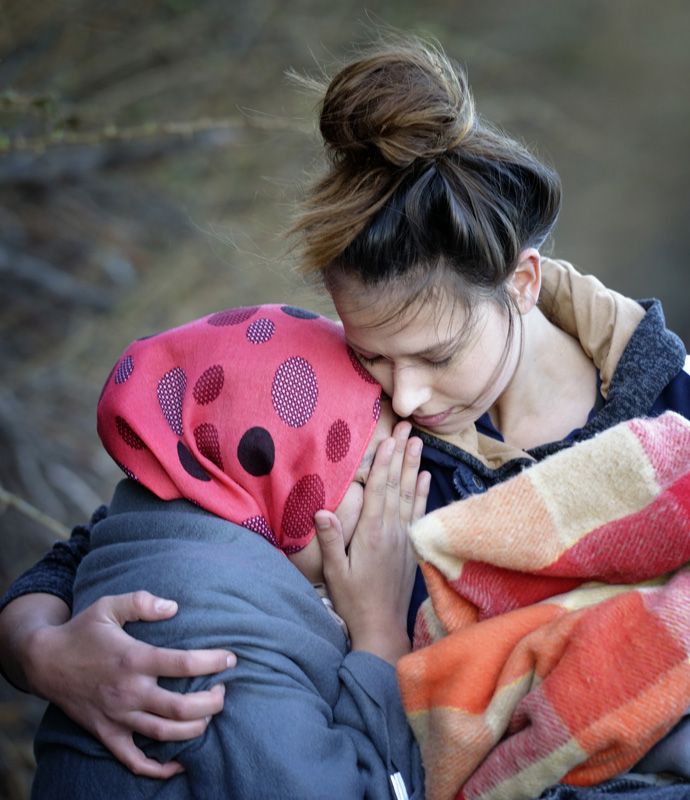 A volunteer embraces a sobbing refugee woman who just landed on a beach near Molyvos, on the Greek island of Lesbos, on Oct. 31, 2015, after crossing the Aegean Sea from Turkey. File photo by Paul Jeffrey/Life on Earth Pictures.

In the advocacy statement, the churches and church-based agencies commit to being proactive “in offering a compassionate welcome, and promoting social integration and a just and peaceful living together, in Greece, the whole of Europe, and beyond.

“Churches on the Greek mainland have opened their doors and offered hospitality to those relocated from Lesbos and other ‘hotspots,’ the statement says. “Churches are also among the driving forces for offering relocation spaces in other EU countries and have been instrumental in welcoming and receiving new arrivals.”

“Churches in many places offer hospitality to the newly arrived, an open ear to the concerns of existing inhabitants and newly arrived alike, and a space for encounter between new and old neighbors, irrespective of nationality, gender, age or belief.”

In an interview for the World Council of Churches, Orthodox Archbishop Ieronymos of Athens and All Greece declared that with no assistance, the burden of this hospitality overwhelms local communities.

“The repressive policies implemented by the EU have resulted in thousands of international protection seekers having to endure long confinement in the overcrowded hot spots of the Aegean islands, living under indecent conditions with insufficient access to fundamental goods or services,” the archbishop said.

Because of that, he added, the fire in Moria “was just a tragedy waiting to happen.”

The Sept. 22 advocacy statement supports “immediate humanitarian assistance to enable the Greek authorities and humanitarian actors on the ground to respond to the needs of the displaced people, as well as for long-term structural solutions for the region’s response to people on the move.”

Such action needs to occur within all EU member states, the statement says, and fearmongering needs to be replaced with compassion.