The United Methodist church here is a beehive of activity. Immigrants hungry to learn German fill two classes, while church members and a Sudanese woman who has taken sanctuary at the church serve the traditional “kaffee und kuchen” — coffee and cake.

Others play with children while parents study. A retired teacher tutors a Russian woman. A couple of church members try to help a young woman who lost her bag on the city train.

The Rev. Susanne Nießner-Brose, pastor of the Erlöserkirche Evangelisch-methodistische (United Methodist Church of the Redeemer), leads the beginning language class of mostly adult men in singing children’s songs to practice their German. She’s substituting for a sick teacher. 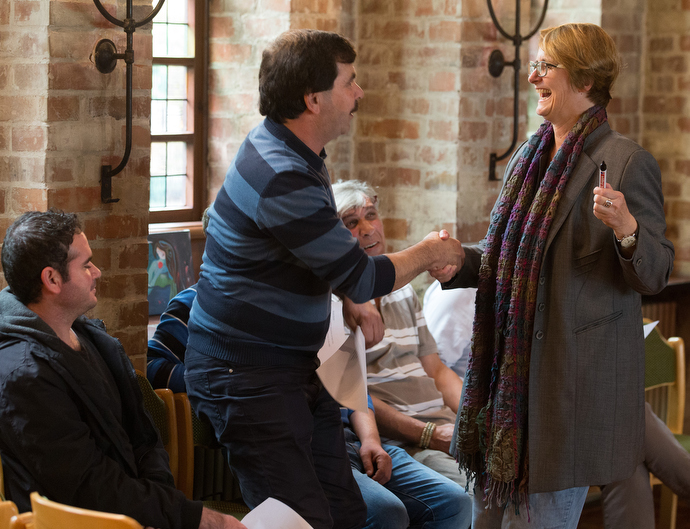 The Rev. Susanne Nießner-Brose (right) greets Aziz, a recent immigrant from Syria, during a German class she is leading at the United Methodist Church of the Redeemer in Bremen, Germany.

The weekly Café Tiramisu gathers volunteers who teach German, help with translations of letters from the German government or simply talk with immigrants.

“All the migrant work enriches us profoundly and is a real turnaround experience for our church in Bremen, also for me personally,” Nießner-Brose said.

She quotes Luke 13:29 as speaking to the experience of the church over the past four years: “People will come from east and west and north and south, and will take their places at the feast in the kingdom of God.” 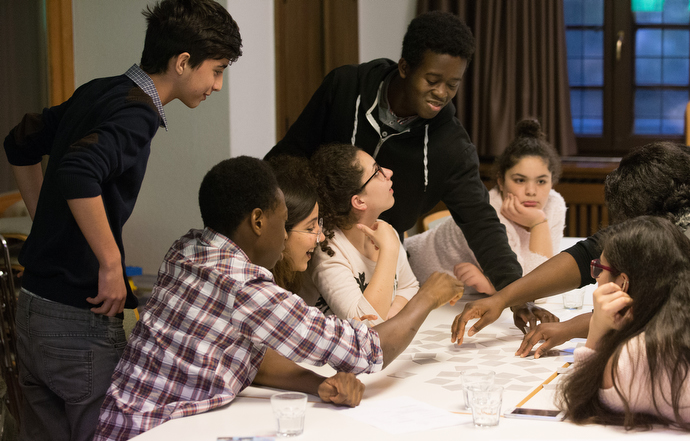 Members of the international youth group YOLO, or You Only Live Once, play a card game at  the United Methodist Church of the Redeemer in Bremen, Germany. The group has youth from Syria, Iran, Ghana and Nigeria.

The café is among a host of church programs for refugees and migrants. Another is YOLO, or You Only Live Once, an international youth group comprised of youth from Syria, Iran, Ghana and Nigeria.

That group underlines how the influx of non-Germans has changed the church. Before the work with immigrants began, the church had no youth group.

“In the future, our congregation will have a different face. Since the offspring from our own rows are missing, we will look at new ways,” longtime member Adolf Garde wrote in a piece for the church newsletter. 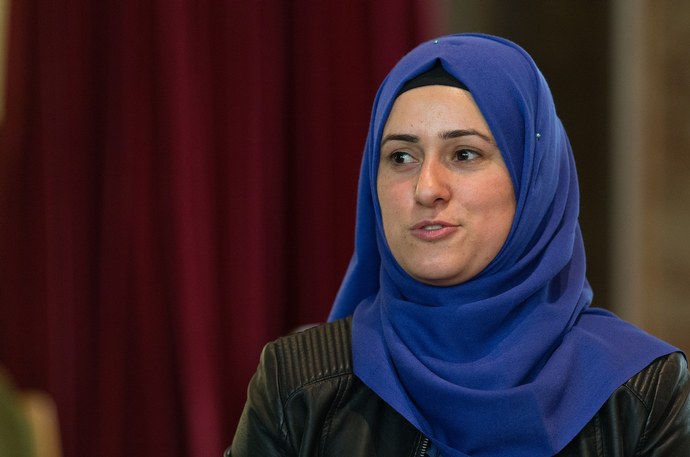 A Kurdish Syrian woman in the beginning German class at the United Methodist Church of the Redeemer in Bremen, Germany, talks about how little contact she has with Germans. “It’s lonely,” said the woman, who is a Muslim.

That welcome is key for refugees, whatever their faith.

A young Kurdish Syrian woman talks about how little contact she has with Germans.

“It’s lonely,” said the woman, who is a Muslim. Almost everyone in the class nods their head in agreement.

“We were very afraid in our town. Here, it’s much better for the children and the school,” said the mother of three, who declined to give her name. Many fear reprisals against families still at home. 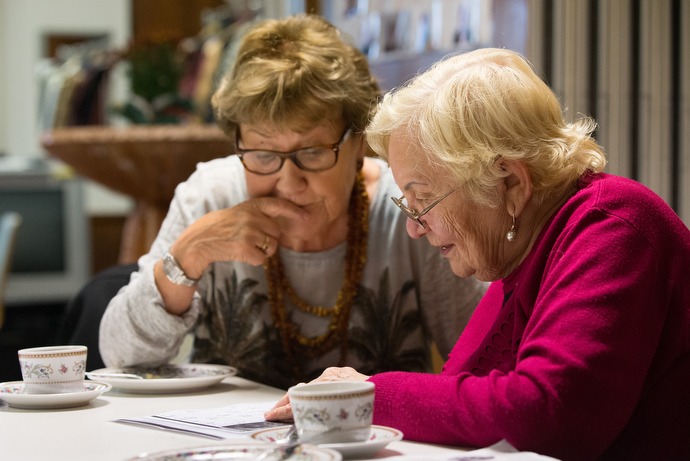 Retired teacher Doris Franke (left) tutors Russian immigrant Elmira Rieb during Café Tiramisu at the United Methodist Church of the Redeemer in Bremen, Germany. The weekly program gathers volunteers who teach German, help with translations of letters from the German government or simply talk with immigrants.

Amir Ali Hezorgavsby, an Iranian who was baptized a Christian in Greece, said he has almost no contact with anyone outside the church.

Doris Franke, the retired teacher who is tutoring the Russian woman, empathizes. “I’m a refugee myself. In 1945, I fled with my mother from the area that was East Prussia that is now part of Poland,” she said. Ethnic Germans evacuated in 1945 or expelled from former German territories after Soviet occupation were not especially welcomed back to the war-torn country, she said.

“My father came home from the Russian front. We had nothing. We had no relatives,” she said.

Franke is a member of the Evangelical Church in Germany, the state church formed from about 20 Protestant denominations, not including The United Methodist Church. But she comes to the café and tutors Elmira Rieb and helps with the monthly women’s breakfast.

“I think that’s the real Christian spirit, to help people,” Franke said, adding that everyone can come to this church.

One person who has found a literal home here is the 27-year-old Sudanese woman fighting deportation to Italy.

The woman, who asked to be called Fatima rather than her real name, said she was baptized as a Christian at age 12, but her father imprisoned her and her mother, hoping to force them to return to the Muslim faith.

After she promised to become a Muslim, he released them. She fled, working her way to Egypt, where she paid a smuggler 577 Euros to take her in a boat along with other refugees to Italy. She ended up in a refugee camp that she said lacked adequate food or shelter.

She said she worked as a prostitute to get money for food.  “She had no choice,” said Nießner-Brose. 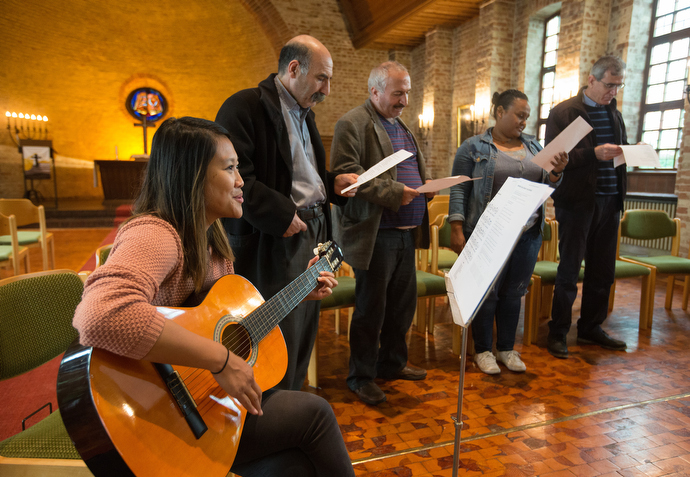 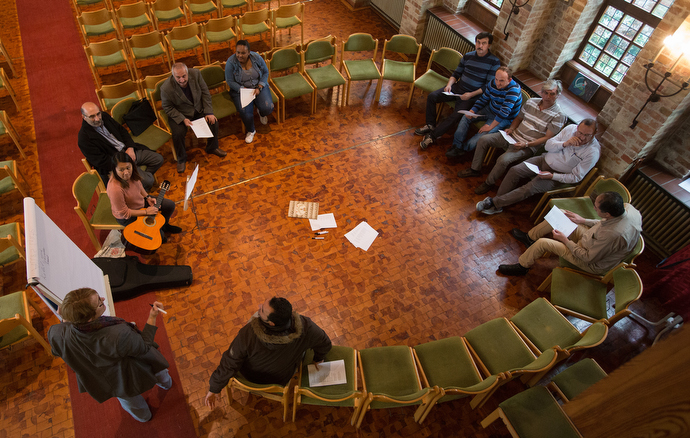 The Rev. Susanne Nießner-Brose (at white board) leads a German class for recent immigrants at the United Methodist Church of the Redeemer in Bremen, Germany.

She got the money for a train ticket to Germany, where she sought refugee status. Fatima connected with the church when she met Stephany, a 17-year-old Syrian member. “It would have been very, very bad if they hadn’t found me,” Fatima said.

Eventually, Fatima went into asylum at the church to avoid deportation back to Italy under the Dublin rule, which has refugees mostly stay in the European country where they first set foot.

Stephany, who didn’t want her last name used, was handing out Arabic Bibles at the train station when she met Fatima. 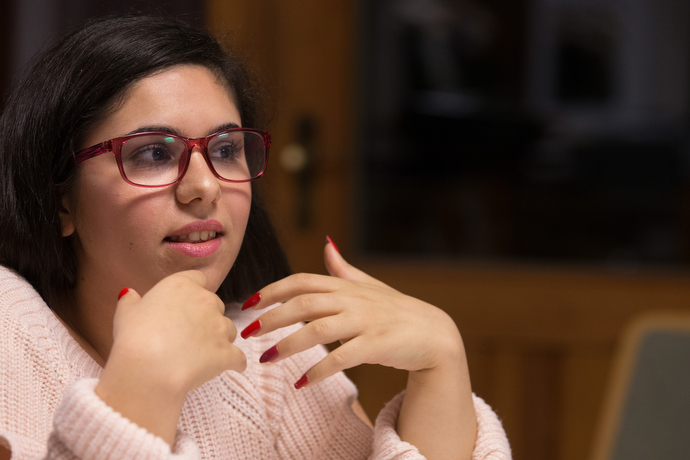 Stephany, 19, escaped a war zone in Syria to immigrate to Germany where she is part of the youth group at the United Methodist Church of the Redeemer in Bremen.

The now 19-year-old Syrian celebrated her birthday in October with the youth group, where she talked about life in a war zone. Stephany stayed in Syria caring for her two younger sisters until her mother got refugee status in Germany and her three daughters could join her.

“We are happy to be here. I have my freedom,” Stephany said. “We love this church.”

She hasn’t forgotten the fear of violence and war in Syria and cried quietly as she spoke of how hard it was. “We were always afraid,” she said. 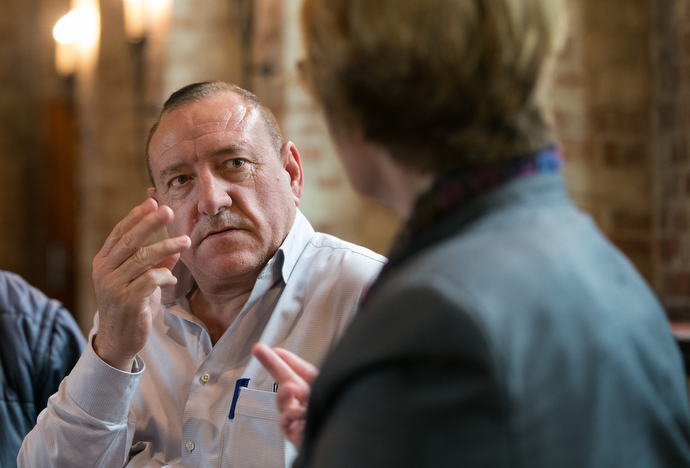 Hussein, an immigrant from Syria, talks with the Rev. Susanne Nießner-Brose during the beginning German class she teaches at  the United Methodist Church of the Redeemer in Bremen, Germany. 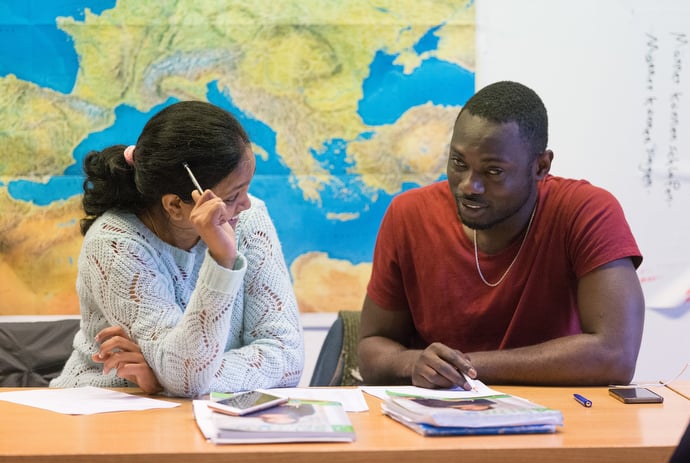 Recent immigrants Swapna (left) from India and Richard from Ghana work on exercises in their German class at the United Methodist Church of the Redeemer in Bremen, Germany.

She and the other youth clearly adore Yvonne Agduyeng, the Global Mission Fellow who runs the group and assists with other projects with refugees and migrants. Nießner-Brose said Agduyeng’s work has been integral to the church’s refugee programs.

Global Migration Sunday is Dec. 3, the first Sunday of Advent. The day of prayer and special offering is aimed at raising awareness and funds to aid migrants and refugees.

One project Agduyeng has been working on with children and youth is a world map with photos of church members and lines to their countries of origin.

Agduyeng, a member of Kent United Methodist Church in Kent, Washington, said she wanted to show the diversity of the church.

Nießner-Brose admits integrating all the different cultures is hard. Some don’t like Bible readings in different languages or having the announcements translated into Farsi. Others sometimes feel the refugee programs cost too much money and resent the focus on refugees, she said.

Other members see only blessing.

“A month ago, an elderly lady, Erna Loppe, said to me after Sunday service where sometimes two-thirds are migrants that, ‘If we did not have the refugees, we could pack up and leave,’ meaning close the church,” Nießner-Brose said.

Read the first story in our series on the church in Germany, Refugees find community with United Methodists.
Read our story on the impact of this special offering, Global Migration Sunday shines light on a crisis. 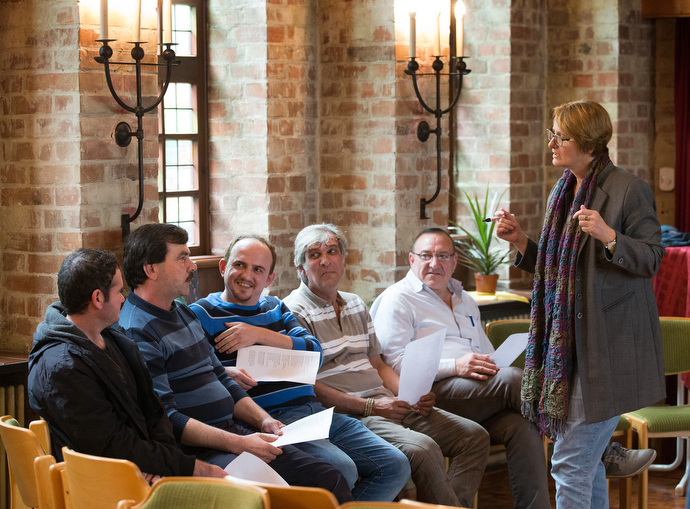 The Rev. Susanne Nießner-Brose (right) leads a German class for recent immigrants at the United Methodist Church of the Redeemer in Bremen, Germany.

As record numbers of migrants continue to cross Mexico’s southern border, the Methodist Church of Mexico is seeking new ways to be in ministry with immigrant families on the move. UM News accompanied church leaders and longtime partners as they sought ways to help. Mike DuBose reports.
General Church