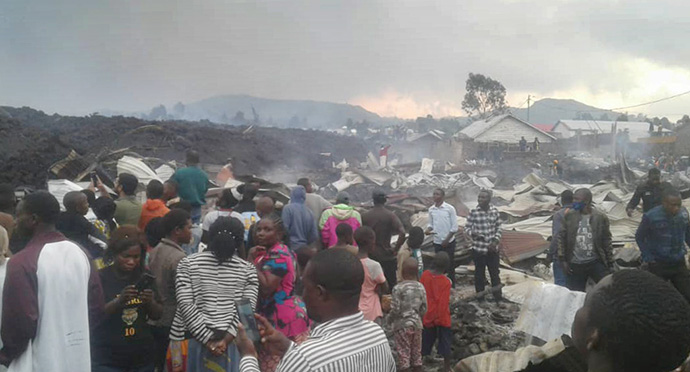 Of the people who were killed in the May 22 eruption, nine died in a traffic accident, four died trying to escape from Munzenze central prison, and two others were charred by lava, according to a report by Patrick Muyaya, the minister of Communication and Media for the Democratic Republic of Congo. Many people are missing, possibly including 170 children, the BBC reported, citing UNICEF.

Majengo United Methodist Church and the eight blocks around it were damaged, along with more than 100 houses of United Methodist members, according to the Rev. Henry Jean Robert Kasongo Numbize, Goma District superintendent. There were also several cases of theft of United Methodist property in Goma, as local authorities ordered people to evacuate, he said.

Pastor Valentin Amsini said Majengo Church had been swept away. The United Methodist congregation had more than 800 members, but with COVID-19, its worship attendance was averaging 350.

He said he was convinced that one day the congregation would have another building where the people could pray to God.

After sending an alert through United Methodist Communications, Bishop Gabriel Yemba Unda said he thanks everyone for the prayer support and the calls of encouragement that he has received. Bishop Unda oversees the Kivu Annual Conference, which includes Goma.

The bishop said he is asking all faithful United Methodists and the population of Goma to be vigilant and to follow the official communications and directions of the response plan set by the authorities. 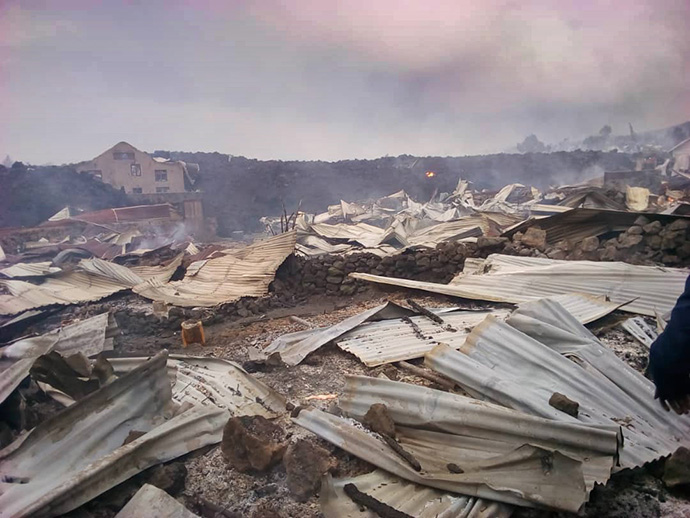 Majengo United Methodist Church in Goma, Congo, was destroyed in the eruption of the Mount Nyiragongo volcano. Photo by Philippe Kituka Lolonga, UM News.
The lava stopped short of the most populated areas of Goma, a city of 670,000, the BBC reported.

When the volcano erupted May 22, people fled Goma to Sake Village and South Kivu, and also to the neighboring country of Rwanda. Many of them left without taking anything and returned on May 23 to find their houses covered with lava, Pastor Amsini said.

Mirindi Shamavu, a member of Majengo Church, is now homeless “because my house and all my belongings were transformed into lava. I thank God because I am alive.”

After fleeing to Rwanda, Bijoux Mwamini returned to Goma to find that she had no home.

Mwamini, secretary of Majengo Church, said she could no longer identify her plot because everything had turned into lava. 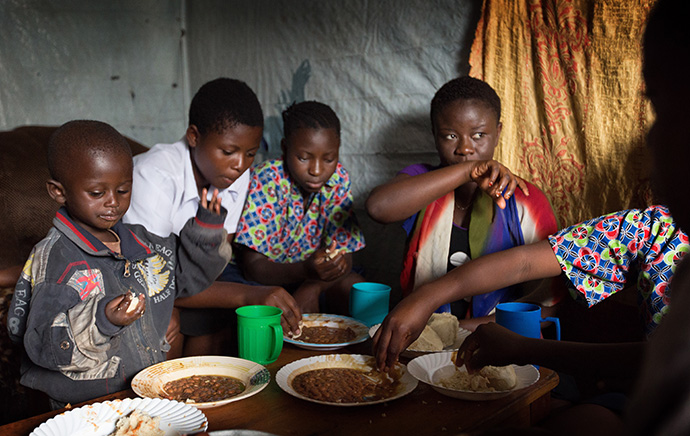 Children share a meal at the United Methodist orphanage in Goma, Congo, in 2015. Current residents of the orphanage were evacuated following the May 22, 2021, eruption of the Mount Nyiragongo volcano. File photo by Mike DuBose, UM News.
Charles Monga, the evangelist in the Buhene Block of Majengo Church, said he had lost four children but found them Sunday after searching for them in Sake Village. Even if he has no home or property, he said, he is alive and knows that God will help.

Leonard Shako, a registered nurse at the Majengo United Methodist Health Center in Goma, said more than five nurses and 20 patients also lost their homes and property. The repeated earthquakes in the city of Goma have caused cracks in the walls of the hospital, adding to the risk, Shako said.

On the recommendation of the Goma health authorities, Shako said he is transferring all the patients affected by the eruption to general hospitals in the area. As of Sunday, he said he had already transferred more than 60 patients who had burns and trauma.

Okako Okenge Adolphine, head of the United Methodist Orphanage of Goma, said she evacuated all of the orphans to Sake. She said she is currently experiencing several problems, especially with obtaining food, since she lives in another place, she said. 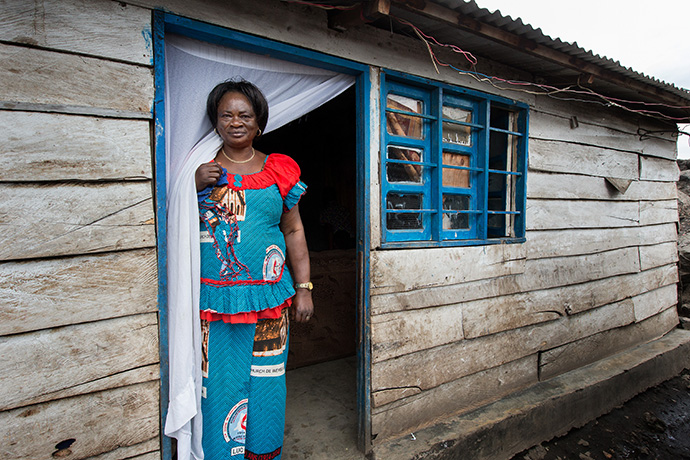 Okako Okenge Adolphine, known as "Maman Olela," stands in the doorway of the United Methodist orphanage in Goma, Congo, in 2015. She was able to safely evacuate the children in her care following the May 22, 2021, eruption of the Mount Nyiragongo volcano. File photo by Mike DuBose, UM News.
Jean Tshomba, coordinator of the Emergency Office in East Congo, said he is working with the United Methodist Committee on Relief on arranging emergency aid. UMCOR has confirmed that it is working on a solidarity grant.

“During this past quadrennium, UMCOR provided training and equipment for a new disaster management office in East Congo, which has responded to a number of emergency situations across the region,” said Roland Fernandes, top staff executive of UMCOR and its parent agency, the United Methodist Board of Global Ministries. “We will continue to accompany East Congo United Methodists as they seek to provide humanitarian relief for volcano survivors and people displaced by the recent eruptions.”

The Mount Nyiragongo volcano, which is about 10 kilometers from Goma, last erupted in 2002, killing 250 people and leaving 120,000 homeless, according to the BBC.

Philippe Kituka Lolonga is a Communicator in the Kivu Conference.

A partnership among the North Katanga United Methodist Church, Harper Hill Global and others provides lifesaving information on how risky high blood pressure can be for pregnant women.
Global Health

Church helps nurse children back to health in Congo

With the support of United Methodist Global Ministries’ Global Health program, more than 1,000 malnourished children are recovering in the Democratic Republic of Congo.