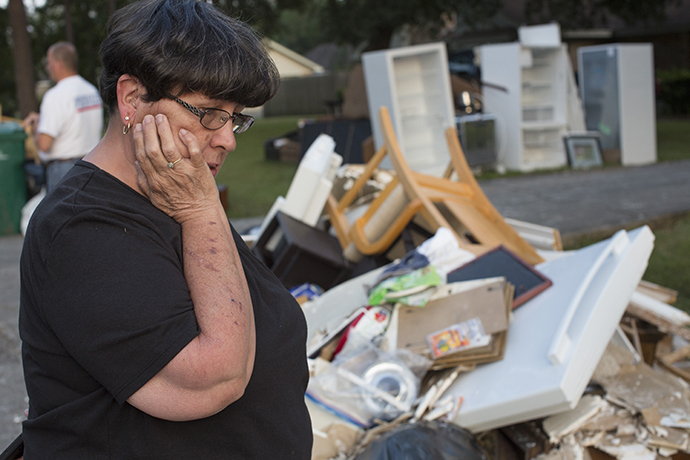 Sandy McCall looks through her furniture and flooded possessions on the street outside her home in Orange, Texas, after Hurricane Harvey. Photo by Kathleen Barry, UMNS.

That storm left a path of destruction from the Caribbean to the southeast United States nearly a year ago. Haiti was the hardest hit with more than 500 people killed, while catastrophic flooding left more than 47 dead in the U.S., more than half of those in North Carolina.

“We’ll be at it for five more years,” said the North Carolina Conference’s Bishop Hope Morgan Ward of recovery efforts in the state. “We have moved into the long-term recovery phase and are rebuilding homes.” 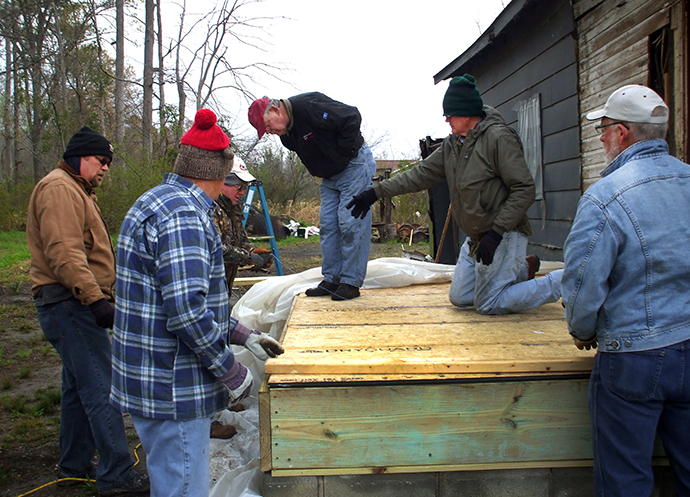 The Greenwood District built a complete bathroom for Allen James of Sellers, S.C., and redid his kitchen, adding a full stove and refrigerator and replacing his damaged sink cabinets. Sellers’ home was hit by Hurricane Matthew in October 2016, resulting in extreme flood damage. A team of United Methodists, organized by the Rev. Mike Evans and Matt Brodie and representing several United Methodist churches, restored his home in spring 2017. Photo by Carolyn Cantrell, South Carolina Conference.

The United Methodist Committee on Relief has been aiding families affected by natural and manmade disasters around the world since 1940. UMCOR also provides humanitarian relief, including assisting refugees, addressing world hunger and poverty and conducting other sustainable development work in more than 80 countries.

UMCOR’s disaster response is a three-stage process: an emergency stage; a relief stage to help homeowners assess damage and stabilize their homes if possible, while also caring for their emotional and spiritual needs; and the long-term recovery stage.

“We really are there for the long haul,” said the Rev. Russell Pierce, interim executive director of mission engagement and director of The Advance, the designated giving channel of The United Methodist Church. 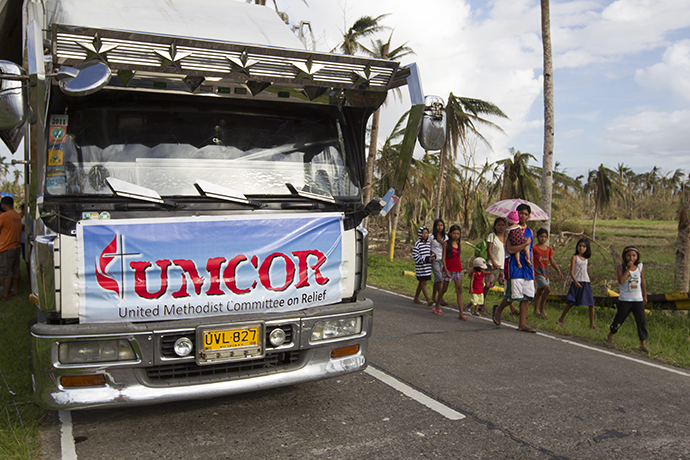 Being the last to leave after a disaster is a calling card for the United Methodist Committee on Relief, and a sign of hope for those starting the recovery process in the wake of Harvey, Irma and Maria.

UMCOR’s disaster response process starts with a request from the resident bishop or church partner in the area. The request may be for financial or material resources, volunteers or technical assistance. UMCOR emergency grants are issued to help conferences respond immediately. The relief agency continues to work closely with conferences during every stage of the disaster.

“We focus on the following phrase: ‘What does this person in this community need to recover from this disaster?’ That’s the phrase that brings the most respect both to the survivor and to the community, and also to our conferences,” said Catherine Earl, director of U.S. disaster response and partner relations for the United Methodist Committee on Relief. 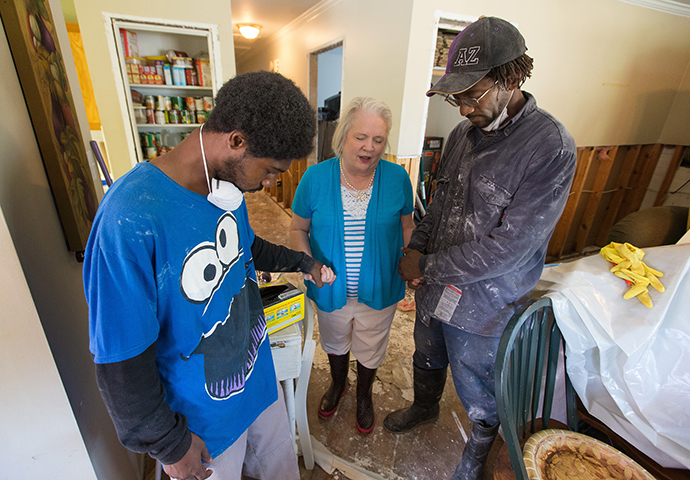 The Rev. Susan Ferguson (center) of Asbury United Methodist Church in Lafayette, La., prays with Trent Noel (right) and his son, Jay Barnes, who were gutting flood-damaged drywall at the home of Noel's mother in August 2016. File photo by Mike DuBose, UMNS.

“We all have to recognize that the community owns the disaster. The conference lets us know when they are ready for volunteers and the kinds of skills they need to help, keeping the survivors always central to our work.”

There are well more than 10,000 UMCOR-trained volunteers ready to be called into service, Earl said. As is mandated by the Book of Discipline, every conference has a disaster response coordinator who leads the local efforts and works with Early Response Teams from around the country. Each team typically has six to 10 people who have gone through intense UMCOR training, with recertification every three years.

FIVE THINGS YOU CAN DO TO HELP 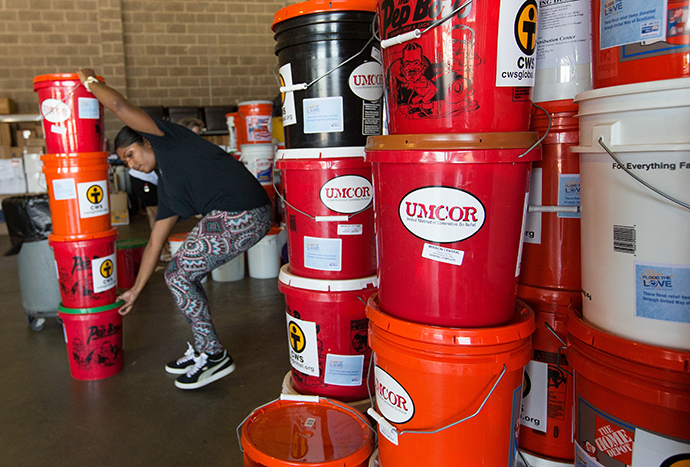 The United Methodist Committee on Relief offers these ways in which people can help after a disaster:

1. Continue to pray for those whose lives have been affected, as well as Early Response Teams, disaster coordinators, and the many volunteers who are working tirelessly to provide relief.

Please note the Advance number in the memo line.

4. Donate only those items requested.

5. Wait for an invitation to volunteer.

On the local level, “it’s The United Methodist Church responding, but UMCOR is the one that’s equipped them to respond,” Pierce said.

Ward, who was director of connectional ministries with the North Carolina Conference in 1999 when Hurricane Floyd pounded the state, recalls being at a pastor’s meeting in the days after the disaster when someone asked, “Where is UMCOR?” She said one of the pastors replied, “UMCOR is us.”

UMCOR is a part of the United Methodist Board of Global Ministries, the denomination’s mission agency. For Thomas Kemper, the agency’s top executive, it is a perfect fit.

“UMCOR is part of Global Ministries because we in UMCOR treat everybody equal … and this is from the beginning, 75 years ago, without looking at color, creed or any distinction and not giving preference to Methodists. It’s part of Global Ministries because it’s an expression of the same Methodist understanding of reaching out, being in solidarity, sharing God’s love.”

Susan Luttrell, director of serving and outreach at First United Methodist Church in Mansfield, Texas, has seen that solidarity in recent weeks in her visits to the Coastal Bend area of the state, which was devastated when Hurricane Harvey made landfall as a Category 4 storm on Aug. 25.

“It’s not only discussing the ins and outs of tarping or mucking out a house, but it’s also covering the most important thing that we do: being a caring Christian presence. And if we do nothing else at a survivor’s home but sit and listen to their story, then we’ve done what we needed to do,” Luttrell said.

Another hallmark of UMCOR is providing aid in areas that don’t get much media attention.

While all eyes were focused on the flooding in Houston after Harvey, tiny communities in the Coastal Bend area had fallen off the radar, said Luttrell, who traveled from town to town to access needs. “If your house has got damage and you can’t go to work and you can’t earn money, you’re starting to get in between a rock and hard place real fast,” she said.

Mudslides in Sierra Leone and earthquakes in Mexico also have been overshadowed by the recent hurricanes, but UMCOR is working with its partner agencies in those areas to offer relief. In August, UMCOR disbursed a $10,000 emergency grant to The United Methodist Church in Sierra Leone. It is currently working with partners to provide tents, water filters and water containers to those living in temporary settlements there and will be airlifting hygiene kits and bedding supplies to those who have been internally displaced. 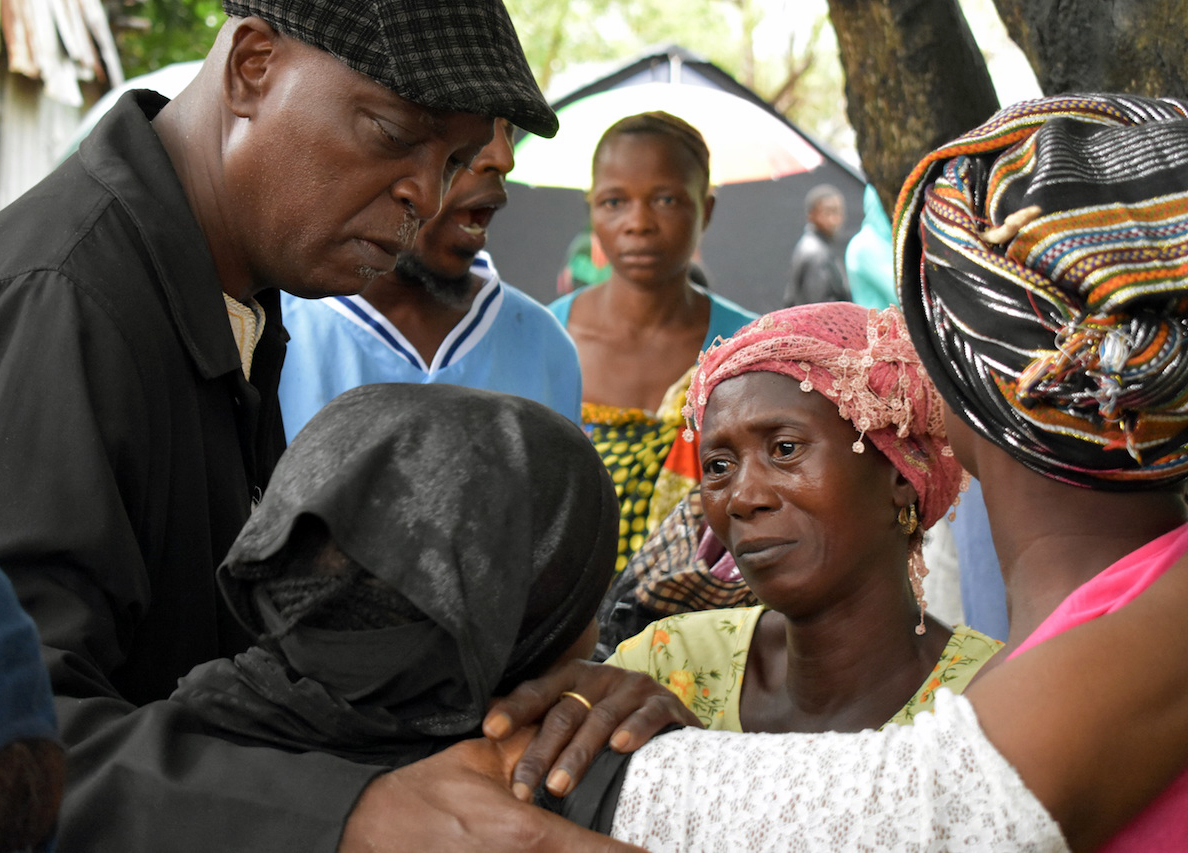 The Rev. Henry Samuel of Vine Memorial Baptist Church, an affiliate member of the Council of Churches in Sierra Leone, prays with and consoles a group of women who lost 17 members of their family during the Aug. 14 flood and landslide in in Freetown. Photo by Phileas Jusu, UMNS. 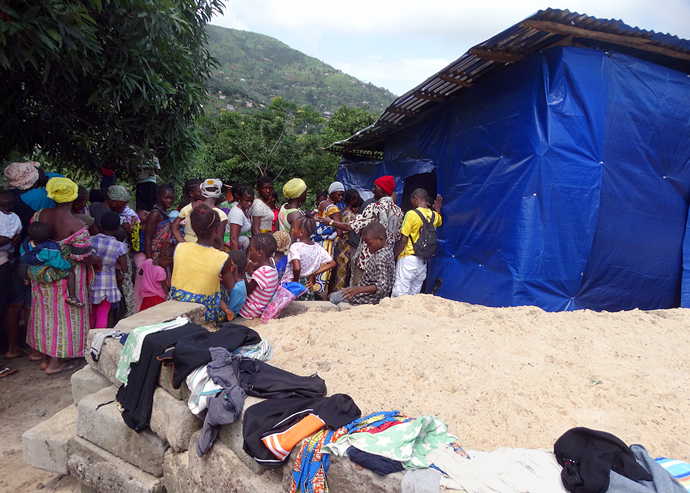 Patients, mainly nursing mothers and pregnant women affected by the Sierra Leone flood and landslide, queue up for health services at the United Methodist Disaster Response booth on Aug. 24 in Freetown. The church medical team will provide free medical services for the displaced for the next month. Photo by Phileas Jusu, UMNS.

UMCOR’s administrative costs are covered by donations received on UMCOR Sunday (formerly One Great Hour of Sharing), along with other undesignated gifts made throughout the year. None of UMCOR’s support comes from apportionments; it’s all second-mile, voluntary giving.

Since Hurricane Harvey, $8.7 million has been donated to the Advance disaster funds. 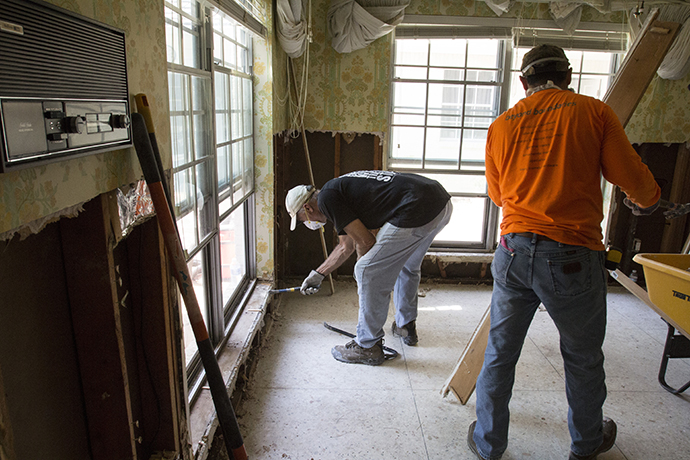 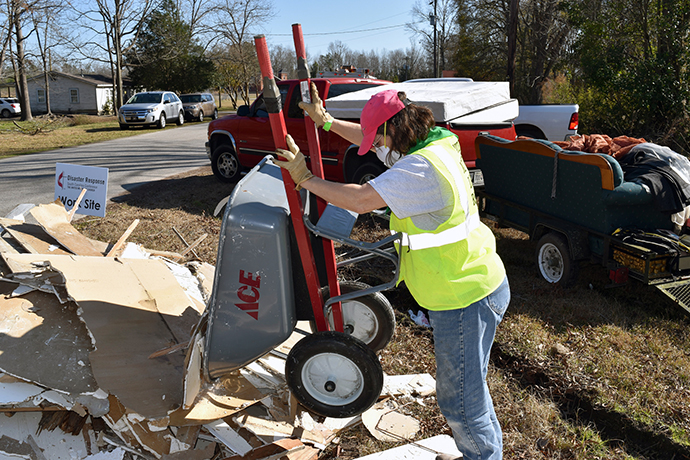 In addition to money, United Methodists from across the connection have been responding by collecting and assembling cleaning kits. Earl said the value of volunteers cannot be overstated, noting that they are especially important in the long-term recovery phase.

“The way I see it is like an iceberg,” she said. “UMCOR’s financial support is a big part of the recovery, but what often is uncaptured and sometimes uncelebrated is all the rest of the iceberg you don’t see underneath, which are the people. Without that labor force, so much would not happen.”

Ward, former president of Global Ministries and bishop in Mississippi when Hurricane Katrina devastated the area in 2005, said the money that UMCOR provides helps conferences have the staff in place to help survivors rebuild in a way that’s healthy. “If we create an infrastructure so that teams can be well received and put to work fruitfully, they will continue to come,” she said. 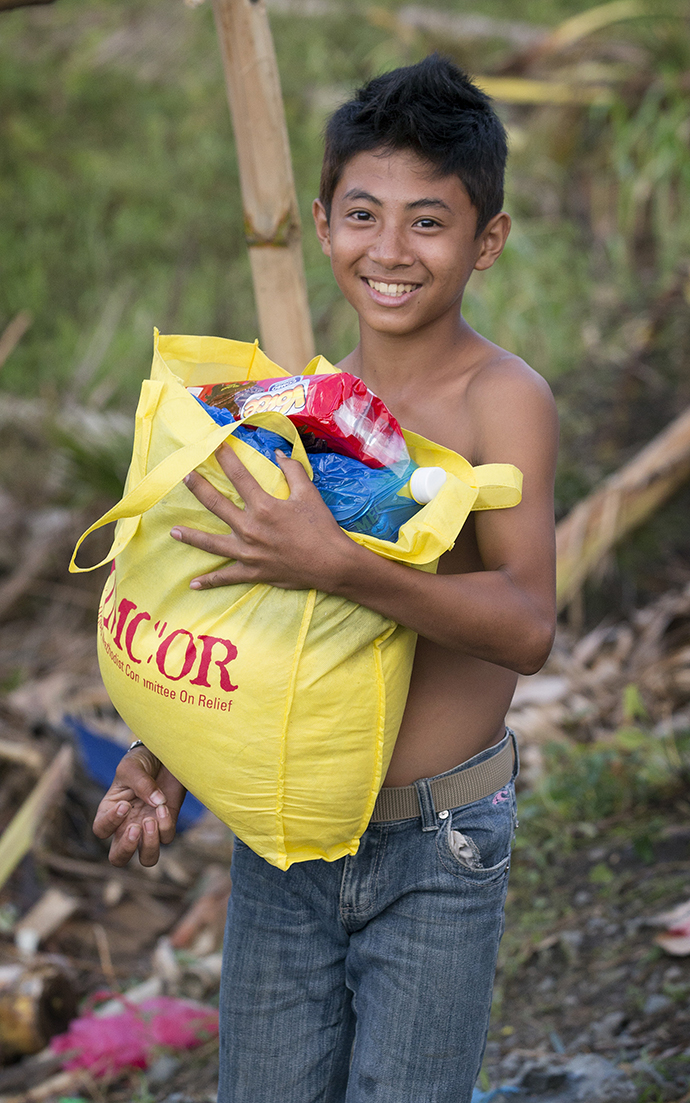 A young boy leaves a food distribution center set up by the United Methodist Committee on Relief carrying food for his family following Typhoon Haiyan in Dagami, Philippines, in 2013. Photo by Mike DuBose, UMNS.

Julie Dwyer is a writer and editor for United Methodist Communications. Contact her at (615) 742-5470 or [email protected].

Thousands of families have been displaced and United Methodist homes, schools and other buildings have been destroyed by flooding in the East Congo Episcopal Area.
Disaster Relief

Ask The UMC: How do we understand suffering from disaster?

When tragedy strikes, it is common for us to ask why. We turn to our faith for answers, but answers don’t come easily.
Disaster Relief