With his rapidly flooding town needing an emergency shelter, the Rev. John Mooney of First United Methodist in Vidor, Texas, opened the church gym on the evening of Aug. 29.

When that quickly filled, he kept going.

“We had to open up the sanctuary and put them on the pews and everything,” Mooney said. “We’ve got about 150 people here, all walks of life, babies, toddlers. We’re depending on church members and the community for food. We don’t have any power.”

Tropical Storm Harvey’s devastation of Houston has captured the world’s attention, but smaller cities and towns to the east and southeast in Texas have been hit just as hard, and flooding rains began to reach Louisiana on Aug. 30. 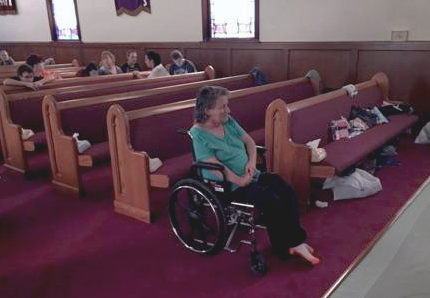 The First United Methodist Church in Vidor, Texas, became a shelter for residents flooded out by Tropical Storm Harvey. The church opened the gym first, and then the sanctuary. Photo courtesy the Rev. John Mooney.

The Rev. Alicia Coltzer sized up the devastation to the Texas Conference’s Southeast District, where she is superintendent.

“It will turn out to be, percentagewise, the same as Houston as far as flooded homes,” she said. “We have thousands of flooded homes.”

“That little Methodist church has rallied the whole town,” she said.

Coltzer said she’s dealing with other churches that have emergency rescue efforts underway and one that became a shelter, but then was threatened by high water itself, forcing the pastor and volunteers to call for rescue.

The First United Methodist Church in Dickinson, Texas, between Houston and Galveston, was trying to help parishioners while coping with its own flood damage.

“We’ve got a theater-style sanctuary that’s sloped, and it’s full of water,” said the Rev. Jack Matkin, pastor. “We’ve got a swimming pool or a baptistery, whichever way you want to describe it.” 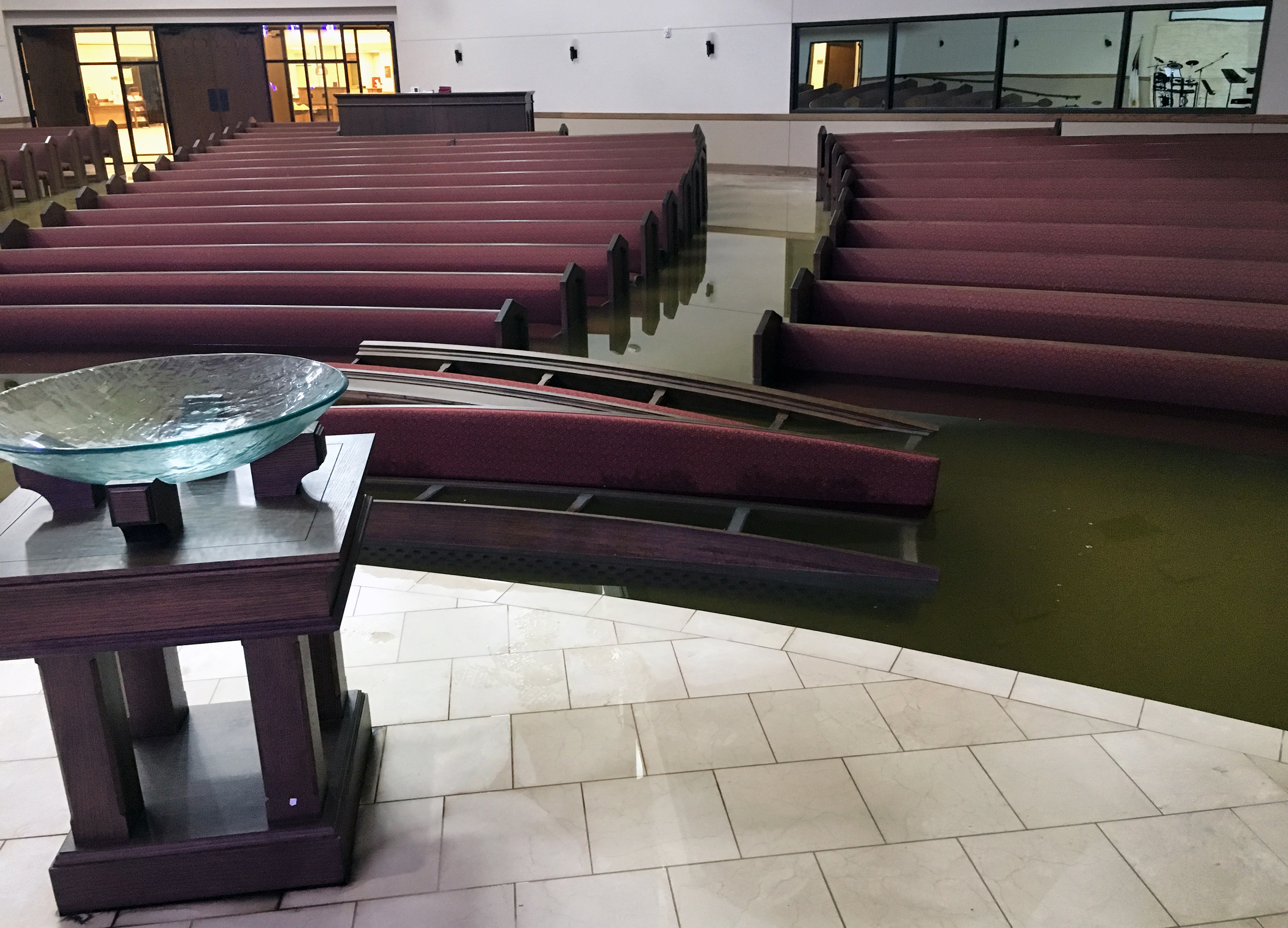 The First United Methodist Church in Dickinson, Texas, had its sanctuary flooded by Tropical Story Harvey. Photo by the Rev. Jack Matkin.

The rains were heavy across this part of Texas beginning Aug. 26. Matkin’s associate pastor, the Rev. James Littleton, spent much of that night and the next morning trapped in a vehicle, due to impassable roads.

Littleton was desperate to get home to his wife, Christy, so he and the friend he was with decided to walk.

“We made that 3-mile walk with water at least at our knees,” he said. “Most of the time it was around our waist. At one point the water was up to our neck.”

Dickinson and neighboring communities saw water recede on Aug. 27, but the heavy rains and rising waters started again on Aug. 29.

The Beaumont-Port Arthur area of Texas recorded about 26 inches of rain on Aug. 30 alone. For Marilyn Myers, longtime member of Wesley United Methodist Church in Nederland, Texas, a lifetime of witnessing coastal Texas storms and flooding had not prepared her for this week.

“Never seen anything like this,” said Myers, education director at her church.

Dickinson, Texas, between Houston and Galveston, was particularly hard hit by flooding from Tropical Storm Harvey, and the First United Methodist Church of Dickinson did not escape. Photo by the Rev. Jack Matkin.

“Those that have boats are trying to get out and go rescue people,” Myers said.

Coltzer said estimates from Vidor are that 85 percent of its homes have been flooded. To the Rev. Scott Brumley, associate pastor of First United Methodist Vidor, that sounded about right.

“I’m dealing with tons of phone calls and texts from people who are in their house. They’ve got water and nobody to get them out,” he said.

The First United Methodist Church of Beaumont reported minor leaks, despite the deluge in its city.

"We are assessing the needs of our congregation and plugging into local recovery efforts in every way that we are able," said the Rev. Jon Stouffer, pastor.

As of late afternoon on August 30, the trouble was not as severe in southwest Louisiana, said the Rev. Tom Dolph, superintendent of the Lake Charles District of the Louisiana Conference.

“We are having a lot of flooding on the west side of our district, but a lot of that is rural areas,” he said. “We haven’t had any churches damaged.”

Twelve years ago this week, Hurricane Katrina slammed into the Gulf Coast, devastating Louisiana and crippling the city of New Orleans. Last year, the Baton Rouge area suffered severe floods and recovery from that weather disaster is ongoing.

Dolph said he’s still concerned about swelling rivers and lakes from Tropical Storm Harvey, including the Toledo Bend Reservoir on the Sabine River between Texas and Louisiana. But he said his churches are preparing to provide help as needed, including to nearby Texas churches.

"We are absolutely gearing up to help our sister churches in the Texas Annual Conference rebuild their churches, restore their ministries and renew their hearts to healing and wholeness," said the Rev. Katie Simpson, pastor of University United Methodist Church in Lake Charles, Louisiana.

She added: "It was not long ago when many Methodists from Texas helped us during Katrina and Rita, and that memory and gratitude for compassion shown in a time of need never dies."

Lake Charles has opened its civic center as a shelter for flood refugees from Texas as well as any local residents whose homes get flooded. Beauregard Parish, on the Texas border, encouraged residents to evacuate due to the flooding threat along the Sabine River.

The rain finally stopped in Houston, where various United Methodist churches have served as shelters or supply distribution points or helped with evacuations.

The Houston-based Texas Conference is planning for long-term relief efforts, but four or five of its district superintendents are among those flooded out of homes, said Shannon Martin, director of communications.

United Methodist conferences and individual churches across the country are raising relief funds and preparing to send teams to help with cleanup.

The money will go for sustained relief work in the conference’s coastal area, which got battered when the storm hit as a Category 4 hurricane on Aug. 25-26.