From flooded buildings to pastors and other staff forced to flee their homes, United Methodist churches in south Texas grappled with a ruinous storm that wouldn’t go away.

The Rev. Rudy Rasmus of St. John’s United Methodist Church in Houston was among many area pastors who canceled Sunday, Aug. 27, worship services and watched in amazement as floodwaters inundated highways and neighborhoods.

“It’s pretty crazy,” Rasmus said. “I’m 61, and I’ve never seen this in Houston, and I’ve been through maybe 10 hurricanes and three or four major floods. And this is the worst ever.”

The First United Methodist Church in Rockport, Texas, was damaged by Hurricane Harvey, but many buildings in that coastal community were destroyed. The church’s pastor, the Rev. Laura Becker, is among those who had to evacuate. She’s not sure when she and her family will be allowed to return. Photo courtesy the Rio Texas Conference.

“Tropical Storm Harvey has unleashed the worst flooding in Houston’s history, with catastrophic damage,” he said.

Eight deaths related to the storm had been confirmed by Aug. 28. Flood damage was widespread, and included “many” United Methodist churches in the Texas Conference, Jones said.

United Methodist clergy were among those evacuated from their homes by boat on Aug. 27. Other dramas emerged, too.

The Rev. Elijah Stansell, Texas Conference treasurer, was flooded out of his home but worried much more about his daughter. Her pregnancy due date is imminent, and she remains in her Houston home, even as many roads are impassable.

The Rev. Benjamin West, who leads the Wesley Foundation at the University of Houston, left with his family after their garage took on two feet of water. They had a long, slow drive to Dallas, and remained there, hoping to get home soon.

“We heard the water got higher last night, but we don’t know how high,” he said on Aug. 28. “It could be anywhere from a few inches in the house to a foot in the house, to nothing.” 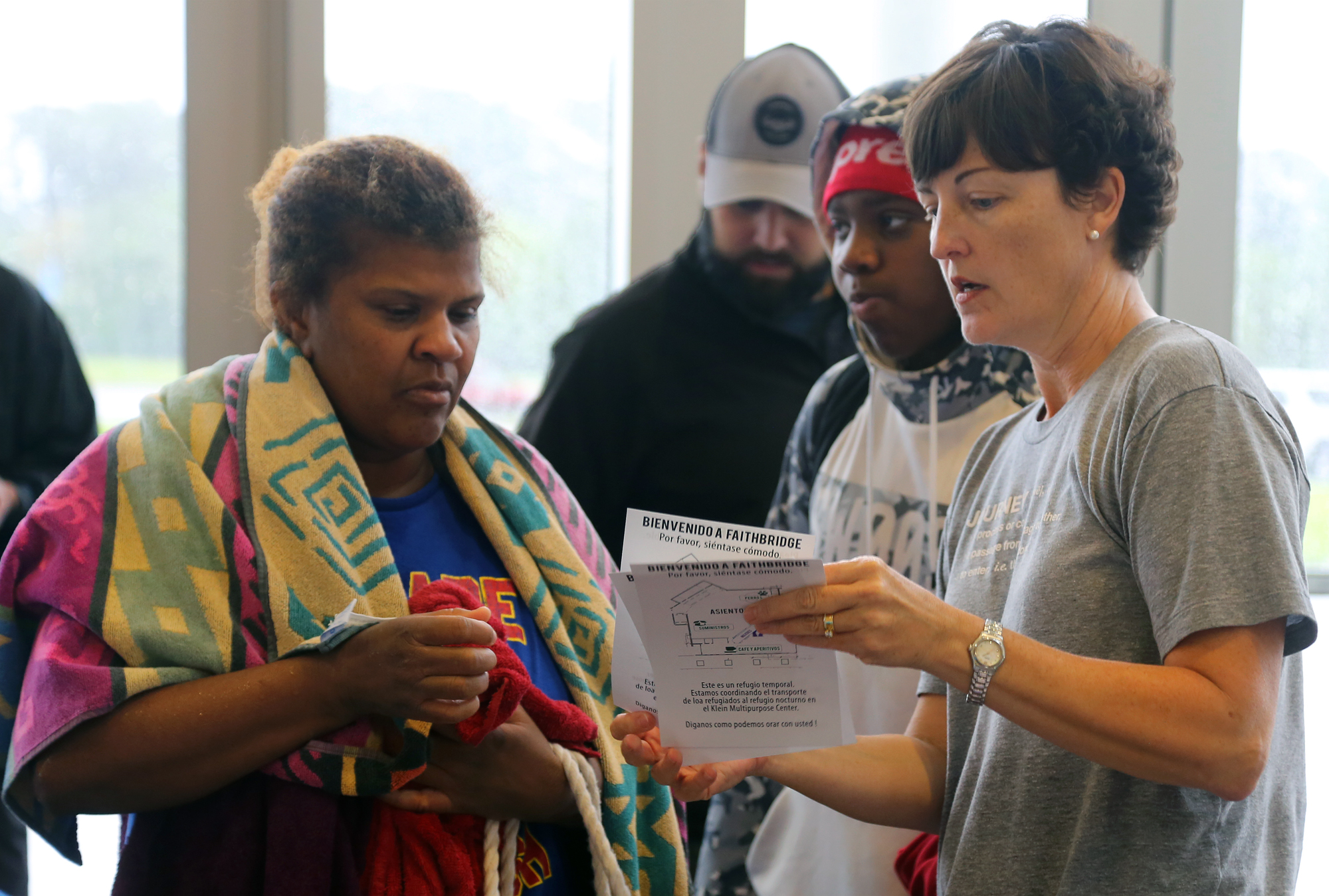 Monique Spell (with paper), a volunteer, consults on Aug. 28 with people who have taken shelter at Faithbridge Church in Spring, Texas. Record flooding  in the Houston area, including Spring, caused a number of other United Methodist churches to open as shelters for people forced from their homes. Photo by Shannon Martin, Texas Conference.

Meanwhile, coastal pastors and others who fled ahead of the storm, which made landfall as Category 4 Hurricane Harvey late on Aug. 25, wondered when they could get home and what they would find there.

The Rev. Laura Becker is pastor of First United Methodist Church in Rockport, Texas, a town devastated by Hurricane Harvey’s winds and lashing rains. She’s in Georgetown, Texas, with her family, and ticked off the different cities around Texas and beyond where her staff members have landed.

Houston recorded 12 inches of rain on Aug. 26 and another 10 inches on Aug. 27, causing bayous and other tributaries to overflow. Officials have had to release still more water from reservoirs for safety reasons.

Some areas in both the Rio Texas and Texas Conferences had to evacuate on Aug. 28 because nearby rivers were projected to overflow their banks.

United Methodist churches from San Antonio to Galveston have opened as shelters.

Faithbridge Church, at its Klein campus, in Spring, Texas, campus, took in people needing a place to stay and became a rest station for police and other emergency personnel.

"This is why we're here," said the Rev. Kenneth Werlein, senior pastor. "God has put great facilities under our stewardship, for the purpose of serving the least and the last and the lost. We're just doing what any Bible-believing congregation would do under the circumstances. This time, though, it's just happened here in our backyard."

Other United Methodist churches have helped with evacuations.

The Rev. Harry Vein, pastor of Faith United Methodist Church in Spring, Texas, near Houston, joined with church members on Aug. 27 in moving furniture and getting people to safety in areas that seemed likely to flood. 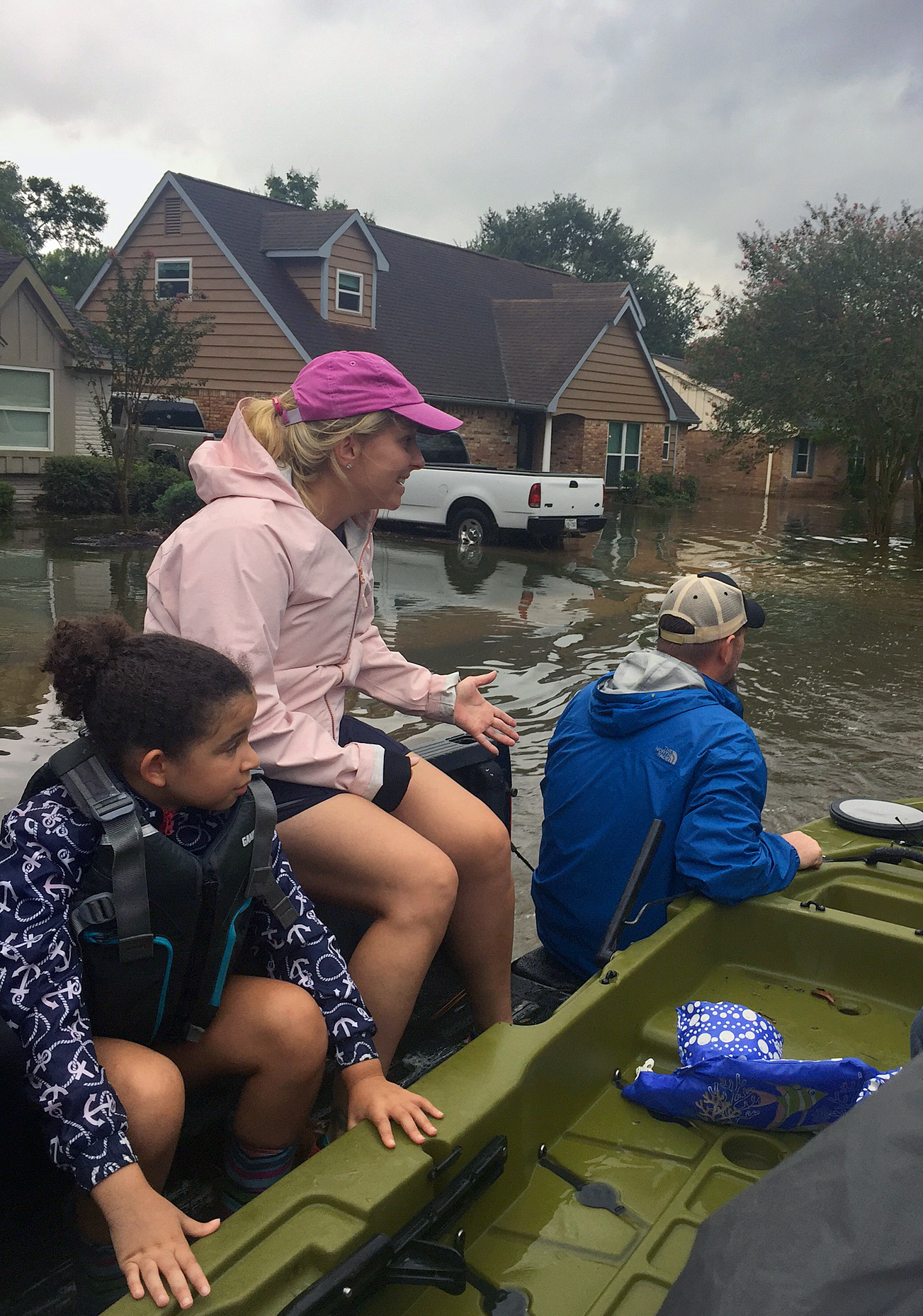 A team from Christ United Methodist Church, in Sugar Land, Texas, evacuated by boat the family of the Rev. R. DeAndre Johnson, a member of the church staff. Johnson said his home had taken on close to a foot of water on Aug. 27, when he made the decision to evacuate. Photo courtesy the Rev. Chappell Tempell.

The team moved one 90-year-old member.

“It was not easy to get him out of the house,” Vein said.

But they succeeded, and when Vein checked on the man’s house on Aug. 28, it had indeed flooded.

St. John’s United Methodist is gearing up for relief work.

“Our first task was to collect wheelchairs for the disabled that are in the shelters because they weren’t able to evacuate with their chairs,” Rasmus said.

The Rev. David King, pastor of First United Methodist in Palacios, Texas, is among the coastal church leaders forced to evacuate. Even while he’s in College Station, Texas, with his family, he’s planning relief efforts.

“I’ve been talking with the folks in Palacios to find out what we need to bring back with us to help in the cleanup and recovery,” he said. “Right now, it’s rakes, heavy-duty trash bags and chainsaws.”

The Rio Texas Conference hopes to dispatch its first emergency-response teams on Aug. 29. The Rev. Will Rice, director of communications, said the teams will likely head to Corpus Christi and Portland, Texas, on the coast.

“We’re going as deep into the mess as we can as those areas open up to take early responders,” Rice said.

First United Methodist Church in Portland was among those coastal churches damaged by Hurricane Harvey. 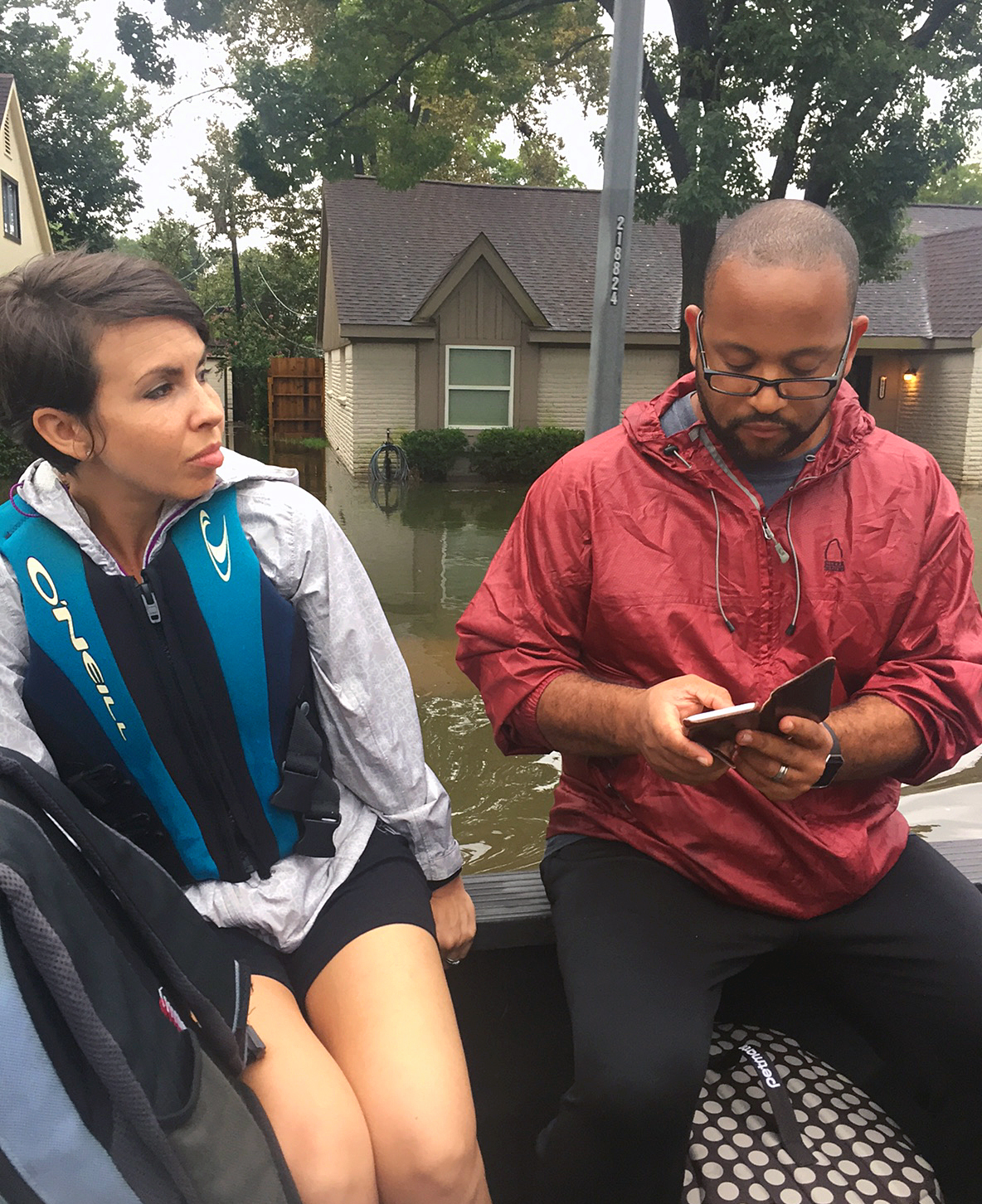 The Rev. R. DeAndre Johnson and his wife, Kelsey, get evacuated by boat on Aug. 27, after their Houston area home took on nearly a foot of water. A team from Christ United Methodist Church in Sugar Land, where Johnson is on staff, got the Johnson family to safety. Photo courtesy the Rev. Chapell Temple.

The Texas Conference office remained closed, though Jones and his staff held teleconferences to plan next steps.

“Past floods have taken up to two years for complete recovery,” Jones said. “We expect this recovery process to last even longer. Yet, the people of The United Methodist Church are committed to loving our neighbors in the name of Christ and will be active in helping them once it finally stops raining.”

Even as the rain continued, United Methodists found reasons for gratitude. Vein was glad that divisive political issues have been set aside for a time.

“You’ve seen the human spirit rise up,” he said. “You’ve seen people helping each other.”

And for Becker, the Rockport pastor displaced from her home and community, there’s a theological lesson to be emphasized.

“For me, God is always present in the storm and the calm, and that really is what makes me a believer in Christ,” she said.

Shannon Martin, director of communications for the Texas Conference, contributed to this story.