The Sierra Leone Conference voted overwhelmingly to be the second United Methodist annual conference to approve and send to the 2020 General Conference legislation for the protocol, a plan for an amicable separation of the denomination.

Members of the conference voted 322-0, with two abstentions, in favor of the protocol.

The proposal was developed after the official petition deadline for the denomination’s top lawmaking assembly, scheduled May 5-15 in Minneapolis.

Yambasu on the negotiation 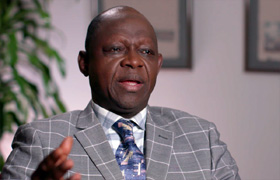 See his interview with UM News
However, a little-used part of the Book of Discipline — the denomination’s policy book — lets annual conferences submit legislation later if they meet between 230 and 45 days before General Conference. For that reason, the protocol legislation had to be sent by an annual conference.

Each General Conference since 1972 — when that language was added to the Book of Discipline — has been punctuated by protests, tears and pain by those on both sides of this issue.

Sierra Leone Area Bishop John K. Yambasu, the African bishop who brought together traditionalist, centrist and progressives for the negotiations that resulted in the protocol, has spent many hours explaining the plan.

Yambasu said traditionalists do not condone homosexuality and believe that it is forbidden by the Bible.

He pointed to the conference members and asked: “How many of you are traditionalists?” Almost everyone raised their hand.

Just as other historic documents produced since the very beginnings of the denomination, the protocol “is by no means a perfect document,” Yambasu said, adding that he has made that point in a variety of settings across the denomination.

But both Quire and Yamabsu said separation is inevitable.

“The United Methodist Church is at a crossroads,” Quire said. “There is a time for everything — a time to be together and a time to part.”

The theme for the Sierra Leone Conference is “Empowering congregations for radical discipleship and economic development.” It is being held March 4-8 at the Koidu Joint Parish in the Kono District.

Both bishops said African United Methodists need to become proactive in supporting their own ministries.

“The time for handouts is over,” Quire said. “The church in Africa is well prepared for radical discipleship.”

The African church needs to be prepared to move toward sustainability, Yambasu said in his episcopal address. “This church has money,” he said.

In explaining the protocol, Yamabsu praised Kenneth R. Feinberg, the professional mediator who volunteered his services for free for the denomination. He said Feinburg told him it was fitting that an African bishop moved in to save the church.

Yambasu said one thing Feinberg said stuck with him.

“He told us we need to write our own narrative or someone else would write it for us,” Yamabsu said.

Like all negotiations, he said, every side had to come “unarmed.” For the group of 16 that negotiated the protocol, that meant “trashing all the plans” circulating in the church.

All sides had to be prepared to give up something, Yamabsu said.

When the bishop started talking about the protocol, few people in the room seemed to know what he was talking about.

In speaking about the unanimous vote, Doreen Kallay, president of United Methodist Women at King Memorial United Methodist Church in Freetown, agreed most people did not understand the proposed legislation.

“But after the explanation from the bishop, we got a better understanding, which made people vote overwhelmingly. I don’t think people voted because Bishop Yambasu was the one behind it,” she added.

The Rev. Francis Charley, superintendent of the Bo District, agreed that Yambasu’s explanation convinced people to support the protocol.

“I think the role of the bishop cannot be ignored in assessing how people voted,” Charley said.

Yambasu reminded the annual conference attendees of the history of African beliefs.

Before the missionaries came to Africa, the people were worshipping God through the mountains, rivers and trees, he said.

“They told us that had someone who can change our lives — Jesus Christ,” he said. “They brought the Bible and told us it was the inspired word of God, that everything in the Bible was true. And we believed them.”

“They taught us Jesus was the only way to heaven. We have believed that for 2000 years and the Book of Discipline has said homosexuality is incompatible with Scripture.

“We cannot change our beliefs so quickly,” the bishop said.

Gilbert is a news writer for United Methodist News Service. Phileas Jusu, communicator for the Sierra Leone Conference, contributed to this story. Contact Gilbert at (615) 742-5470 or [email protected]. To read more United Methodist news, subscribe to the free Daily or Weekly Digests.