• Eighteen United Methodist leaders spoke with urgency about the issues confronting the church during the fourth annual Inclusiveness Conference.

• The UM Association of Retired Clergy holds educational forums with the aim of building a church committed toward racial justice and LGBTQ equality.

The United Methodist Church stands to lose more members and churches because of the issue of race than debate over LGBTQ inclusion, said Bishop LaTrelle Easterling.

Nevertheless, she said, United Methodists should not back down from the denomination’s commitment to dismantle racism.

Easterling was among 18 United Methodist leaders who spoke with urgency about the issues confronting the church during the fourth annual Inclusiveness Conference, organized by the United Methodist Association of Retired Clergy.

The group holds educational forums with the aim of building a church committed toward racial justice and LGBTQ equality. 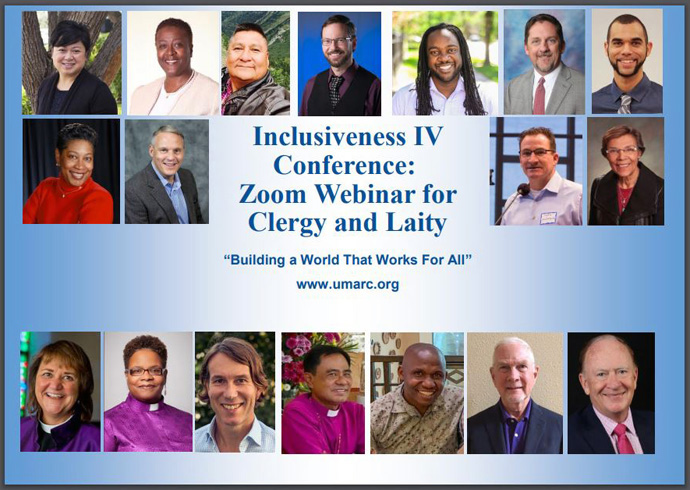 This year’s virtual conference — which drew at least 260 online viewers and featured speakers from four continents — comes at a particularly precarious time for the denomination.

After a tumultuous special General Conference in 2019 that led to both tighter restrictions around LGBTQ ministry and massive resistance to those restrictions, the denomination faces multiple proposals to break up. One of those is a negotiated agreement among progressives, moderates and traditionalists that would allow traditionalists to depart with church property and $25 million in church funds to form their own denomination. African bishops have said this plan should be renegotiated.

The COVID-19 pandemic has postponed the next General Conference, which has final say on denominational breakup, to at least Aug. 29-Sept. 7, 2021.

But as the denomination deals with the spread of the coronavirus, it continues to face theological and political divides as well as financial challenges brought on both by its internal disputes and the fallout of the pandemic.

Amid these challenges, United Methodist bishops and other church leaders also have renewed the church focus on combatting racism following the deaths of George Floyd, Breonna Taylor and others at the hands of police.

That effort, Easterling said, already has faced plenty of pushback within the church.

A commitment to anti-racism is nothing new for United Methodists, she pointed out. Article V of the denomination’s constitution proclaims, “The United Methodist Church shall confront and seek to eliminate racism, whether in organizations or in individuals, in every facet of its life and in society at large.”

Easterling said all United Methodists seem capable of acknowledging racism exists. However, that agreement breaks down when it comes to identifying racism's origins, its current manifestations and from whose hands it is emanating.

Just as people disassemble plumbing when the system doesn’t work, she said the church has a calling to dismantle systems that are not working for more than half of the United States.

“We have to wrestle with the fact the Good News that Jesus proclaimed rarely supported the status quo,” she said.

The United Methodist Association of Retired Clergy first formed in 2016 in what is now the Mountain Sky Conference to show support for Bishop Karen Oliveto, the denomination’s first openly gay episcopal leader.

Alongside other Mountain Sky clergy and church leaders, Oliveto also spoke at the Nov. 14 event against racism and LGBTQ exclusion.

“We in The United Methodist Church are reaching a breaking point because we can’t agree on whether or not all God’s children are welcomed into the life and ministry of the church with all of who they are,” she said.

The Inclusiveness Conference also included perspectives on the church’s challenges from beyond U.S. shores, especially with regard to the debate over LGBTQ inclusion.

Much of the discussion around the denomination’s future has seemed to pit American progressives and moderates on one side against American traditionalists and the growing number of African United Methodists on the other, with Filipinos and Europeans often overlooked in the church conversation. The speakers at the virtual conference aimed to share a more nuanced view.

“Many United Methodists in Europe are considering our church future as it becomes increasingly harder also here to reconcile the theological differences, especially as related to human sexuality,” said the Rev. Knut Refsdal, a district superintendent in Oslo, Norway.

In his own episcopal area, which encompasses seven conferences — that is, church regions — across Scandinavia and the Baltics, he said Bishop Christian Alsted has convened a roundtable to look at the church’s future.

“Each meeting has revealed a strong desire to stay together. We are all small conferences, and we have been together for a long, long time,” Refsdal said. “But there are also strong voices expressing a need to separate.”

People can see the agenda and watch all presentations during the Inclusiveness Conference at umarc.org.

Most African United Methodists broadly agree that same-sex activity violates Scripture, and LGBTQ Africans frequently face stigma. However, the Rev. Augustine Bahati said such views are not unanimous on the continent.

He is the treasurer of Rwanda Provisional Conference. He is also one of the founders of the Inclusive Mission for Health and Hope, a United Methodist ministry that focuses on the marginalized, especially LGBTQ, intersex and HIV-positive people. At present, the ministry is focusing on stopping the spread of the coronavirus.

“Many good African Christians want to be inclusive,” Bahati said. He added that they see their mission as sharing Jesus Christ’s love with all.

In a pre-recorded message, Bishop Rodolfo “Rudy” Juan of the Davao Area in the Philippines offered what a number of United Methodists see as a way forward for a globally and theologically diverse denomination. He championed the Christmas Covenant— a legislative proposal heading to General Conference that originated in the Philippines.

The bishop said he is praying for the legislation’s passage “so with respect for our contextual realities, we can work together.”

David W. Scott, director of mission theology for the United Methodist Board of Global Ministries, cautioned that the methods Americans use to identify the political and theological leanings of fellow Americans often don't work in other countries.

“As people around the world consider the future of The United Methodist Church, I hope we all remember this moral statement: Black African lives matter,” he said.

With United Methodists involved in peacemaking, gender rights and development across the continent, Scott said whatever the church decides could affect whether Black Africans live or die and the quality of their lives.

He said that the denomination needs to say no to queer suicide, no to killings of Black people by police in the U.S., no to extrajudicial killings by police in the Philippines and no to Black Africans dying from wars and under-development because the global economy has robbed their countries.

Whatever the denomination decides about its future, he said, “must be based on the practice of learning to listen to one another and setting aside presuppositions of where people are.”