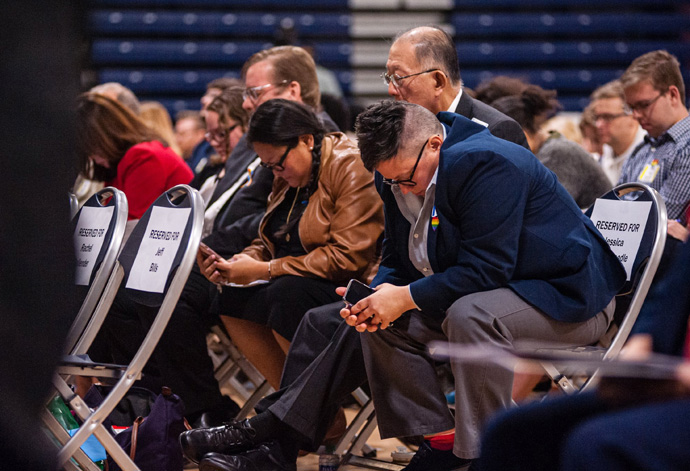 The Rev. Jessica Winderweedle (right) joins in prayer with other members of the Greater New Jersey Way Forward Team during an Oct. 26, 2019 special session of their annual conference at Brookdale Community College in Middletown, N.J. The United Methodist Judicial Council has issued five decisions related to the bishop’s rulings of law from that session. File photo by Corbin Payne.

Working through pandemic restrictions, The United Methodist Church’s top court released five decisions May 5 related to the Greater New Jersey Conference as it deliberates on an extended docket via multiple Zoom meetings.

Greater New Jersey’s special session focused on a plan that would allow churches to decide how to include and affirm LGBTQ people in every aspect of ministry while still allowing other congregations the right to agree to disagree. The report from the Greater New Jersey “Way Forward Team” also included 10 recommendations that were voted on by the conference.

The recommendations covered resources, including training and coaching, for congregational leaders; recognition of the diversity of culture, ethnicity and belief; action to eliminate harm to people in their communities and congregations; and care for youth targeted because of their sexuality or gender identity and communication through a web page for congregations that support the full inclusion of LGBTQ people. The use of congregational covenants also was on the list.

In its May 5 decisions, the Judicial Council affirmed the multiple rulings of law made by Schol in response to questions raised during the session.

But the court also made note, in Decision 1415, of what it considered to be “the blatant discrepancy” between the bishop’s assertion in a ruling that he did not say he would not forward complaints against LGBTQ people and what the minutes showed that he said.

Read other UM News stories about decisions issued in 2021 from the delayed 2020 docket:

The questions of law addressed in Decision 1415 were about the legality of the annual conference’s motion to affirm both the episcopal address made during the 2019 special session and a decision made by the conference’s board of ordained ministry in 2017 to disregard sexual orientation or gender identity when recommending candidates for ministry.

The bishop ruled correctly in finding the motion null and void, the court concluded in Decision 1415. “An annual conference is without power to affirm a statement in an episcopal address and a policy of the Board of Ordained Ministry,” the decision said.

Schol stated in his decision of law on the motion that “whether the bishop’s actual words or the board policy violate The Book of Discipline and Judicial Council rulings is not at issue here. What was asked in the request for a ruling was whether the motion to affirm these actions violated the Discipline. Since the motion was beyond the authority of the annual conference, it is null and void.”

In Decision 1416, the Judicial Council affirmed the bishop’s decision of law that No. 7 of the 10 recommendations approved by the annual conference from the Way Forward report “is null and void because it removes the discretion of the cabinet to carry out their mandated responsibilities.”

Recommendation No. 7 called for the conference to honor congregational covenants related to LGBTQ people “particularly the cabinet when making appointments and working with congregations.”

In Decision 1413, the Judicial Council agreed with Schol that since the Greater New Jersey Conference took no action concerning The Way Forward report itself, a request for a ruling of law on the report is moot and hypothetical.

“The Judicial Council affirms that the recommendations passed at annual conference session do not make decisions for local churches,” the court wrote. “The Way Forward Team presented a written report in the pre-conference journal and an oral report at the Special Session. No action was taken whatsoever concerning the report itself except for 10 recommendations from the team, which were presented for vote by the Annual Conference.”

In Decision 1417, the Judicial Council pointed out that none of the approved recommendations delegated to any committee, bishop, clergy or local church the right to establish any rules regarding matters reserved to General Conference legislative action. The court affirmed the bishop’s ruling that the questions of law raised are moot and hypothetical.

The court also agreed with Schol’s ruling that a question about the entire Way Forward report was moot.

“No action was taken concerning the report called The Way Forward and the request for a ruling of law is moot and hypothetical,” the Judicial Council said in Decision 1414. “The bishop’s Decision of Law is affirmed.”

The Rev. Dennis Blackwell of the Greater New Jersey Conference, who serves on the Judicial Council, recused himself from deliberating on the decisions related to that conference.

In other rulings, the Judicial Council deferred action on decisions by bishops in the Upper New York and New England conferences — requesting additional information in Memorandum 1411 and Memorandum 1412.

Bloom is the assistant news editor emeritus for UM News.

Three United Methodist annual conferences, including one in Africa, have asked the denomination’s highest court to rule on the ramifications of General Conference’s third postponement since the onset of COVID. The Judicial Council also faces more questions about church disaffiliations.
Judicial Council

Bishop Minerva Carcaño has been suspended from episcopal duties since March. While not naming the bishop, The United Methodist Church’s top court ruled that it did not have jurisdiction to take up a complaint against a bishop at this stage of the judicial process.
General Church

Ask The UMC continues to answer questions, address misperceptions, and counter misinformation about The United Methodist Church and the process of disaffiliation from it.