In the late 1960s, Roberto Luis Gómez was a rare Hispanic student at Southwestern University, a Methodist school in Georgetown, Texas. He went by “Robert,” with close friends calling him “Bobby.”

One night he met and prayed with a pre-ministerial student named Charles Millikan. During their dorm-room session, Gómez answered a call to United Methodist ministry.

And he decided he would, forever after, be “Roberto.”

“He claimed his Latin American culture and changed his name. It was like Saul to Paul,” recalled Millikan, a retired Texas Conference elder who serves as vice president for spiritual care and values integration at Houston Methodist Hospital. 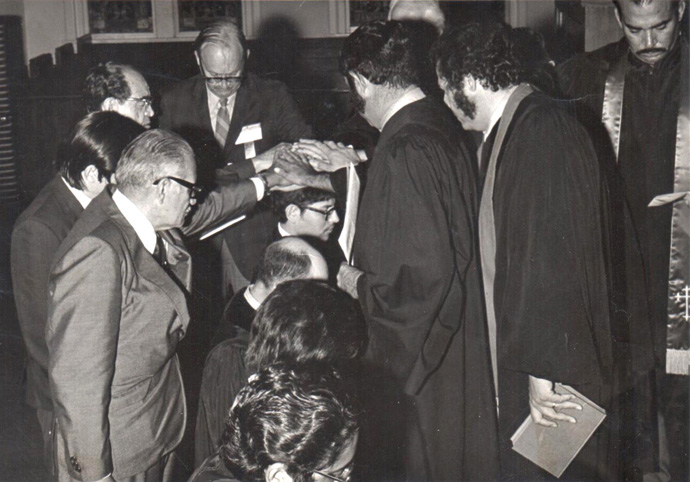 Gómez went on to a long career as a United Methodist clergyman, straddling the English- and Spanish-speaking worlds of the denomination and making a large impact as pastor, district superintendent, general agency board member and trustee of various United Methodist-related institutions, including Southwestern.

“In over 40 years of active service as an ordained minister, Roberto blessed our United Methodist connection with his leadership,” said retired Bishop Joel Martinez.

Gómez died May 26 in San Antonio, at age 75, from complications after open-heart surgery. He’s being remembered for career milestones, but even more for the pastoral care he extended so freely.

“He was a true Wesleyan,” Millikan said. “He saw the world as his parish — and, boy, he claimed it.”

Gómez was born Oct. 24, 1946, in San Antonio, to the Rev. Luis Castillo Gómez and Rosario Rocha Gómez. His father was a barber-turned-Methodist pastor in the Rio Grande Conference. That primarily Spanish-speaking conference — which merged with the Southwest Texas Conference into the Rio Texas Conference in 2015 — had churches scattered across Texas and beyond.

The Rev. Luis Castillo Gómez and Rosario Rocha Gómez with baby Roberto in San Antonio, Texas, in late 1946 or early 1947. Roberto Gómez would grow up to be a leading pastor of the Rio Grande Conference, following his father’s example. Photo courtesy of the Gómez family.

As a pastor’s kid, Gómez would get used to frequent moves and living in parsonages. That continued when he followed his father in becoming a Rio Grande Conference pastor.

“I was 66 years old when I retired,” Gómez said in an oral interview with Elisa Barton. “Out of those 66 years, 65 years I lived in a parsonage or a dorm that belonged to a Methodist-affiliated (school).”

Gómez grew up speaking English and, somewhat less fluently, Spanish. While leadership opportunities for Hispanic students in the public schools he attended were scarce, he credited Methodist Youth Fellowship groups with giving him a chance to stretch and shine.

After Southwestern, Gómez went to Southern Methodist University’s Perkins School of Theology, where he sang in the choir and joined two other students in founding the Chicano Seminarians.

During seminary years, he studied in a program in Mexico City, improving his Spanish and deepening his appreciation for Mexican history and culture.

He was ordained a United Methodist deacon in 1971 and an elder in 1972. Then he began his long tenure leading churches in the Rio Grande Conference.

Gómez and his wife, Juanita, married in 1974, when he was a young pastor in Harlingen, Texas. She was a Methodist and a social worker, but also a self-professed introvert. An early date with Roberto showed him to be the opposite.

They went to see “On a Clear Day You Can See Forever,” featuring Barbra Streisand, but Juanita wasn’t sure they’d see the first minutes of the movie because Roberto spent so much time chatting up the ticket booth workers.

“I thought, ‘Who talks to the ticket people and asks about their families?’ But he was always interested in people,” she said. 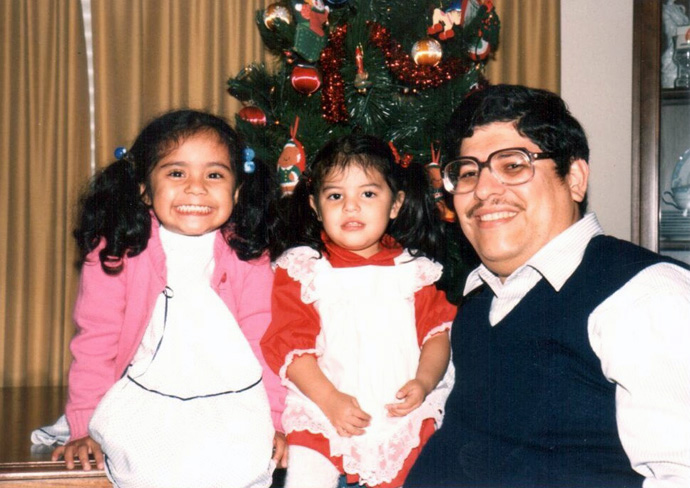 The Rev. Roberto Gómez in a Christmas photo with young daughters Laura (left) and Amy. Photo courtesy of the Gómez family.

As Roberto served churches, the Gómezes would live in various cities and towns in Texas, as well as in Albuquerque, New Mexico. He spent 12 years leading El Mesías United Methodist Church in Mission, Texas, where his father had served.

Bilingual worship services tested Roberto Gómez, as he shared with a laugh in the oral history interview:

Gómez served much of his career as a Rio Grande Conference district superintendent. When he did his doctorate in ministry degree at Perkins in the late 1980s, his major paper was titled, “The District Superintendent as Spiritual Leader.”

And as a 1998 General Conference delegate, he successfully pushed for language in the Book of Discipline to specify spiritual leadership as a priority for superintendents.

“When he was a superintendent he not only visited the pastors and their charges. He also had (the pastors) come to his office to talk about not just what was going in the church, but what was going on in their own spiritual life,” said the Rev. Jose Palos, a longtime Rio Grande Conference colleague.

Not all the pastors appreciated that.

“Superintendents don’t usually ask those type of questions,” Palos said. “The reason he did it was because he was genuinely interested for his pastors to cultivate a deeper spirituality, so they could minister better.”

Gómez had an impact well beyond the Rio Grande Conference, spending 30 years teaching part-time in the Spanish language Course of Study program at Perkins, with a focus on pastoral care.

Besides his wife, Juanita, Gómez is survived by their daughters, Laura Cristina Vinson (Bob) and Amy Raquel Gómez (Jeremy Jonas); a brother, Alfred Gómez; and nieces, nephews and cousins.

A celebration of life service for Gómez will be held July 23 at San Antonio’s La Trinidad United Methodist Church, one of the churches he served. Visitation is at 9 a.m., the service is at 10 a.m., and a reception in the church gym follows. The service is to be livestreamed at this link.

In lieu of flowers, contributions may be made to the Dr. Raul R. Gómez Scholarship Fund at Southwestern University, 1001 East University Ave., Georgetown, Texas, 78626, or at southwestern.edu.

That’s confirmed by Neil Alexander, president and publisher emeritus of the Publishing House.

“Roberto graciously prodded UMPH to set aside inhibitions about recruiting the talent and designating major development funds for what became Mil Voces Para Celebrar, an entirely new official Spanish-language hymnal that has been appreciated and widely used by thousands for 25 years,” Alexander said.

Gómez also served on a number of boards, ranging from the Texas Methodist Foundation to the Texas Diaper Bank. He wrote devotionals and chapters for books, and chaired the editorial board of Apuntes, a United Methodist Hispanic religious journal, for 12 years.

Friends say Gómez revered his parents but left behind the anti-Catholic feeling prevalent in Mexican American Methodist churches of his youth. He formed close ecumenical friendships and embraced liturgical worship over his career.

“Roberto was one of the most catholic, with a small ‘c,’ worship leaders who appreciated the rhythm and wholeness of the liturgical calendar,” Martinez said.

Gómez’s embrace of liturgy and ecumenism was part of a pattern of personal growth.

“In our 55 years (of friendship), I watched that progress,” said Bill Hardt, a historian of Texas Methodism and a Gómez’ classmate at Southwestern.

Gómez twice was nominated for bishop, winning endorsements from the Rio Grande and Southwest Texas conferences, as well as from MARCHA, the Hispanic/Latino caucus within The United Methodist Church. His failure to be elected deeply disappointed him, Juanita Gómez said.

She remembers telling him that he was probably better off, because bishops don’t regularly have the pastoral care opportunities that were so meaningful to him, such as visiting people in the hospital. 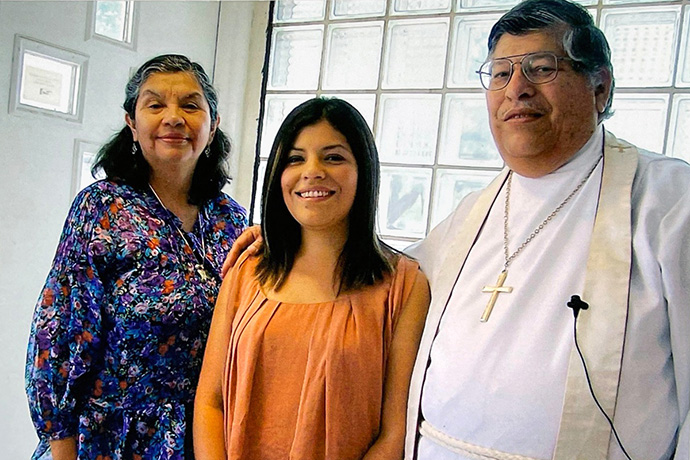 The Rev. Roberto Gómez and his wife, Juanita, flank their daughter Amy. Photo courtesy of the Gómez family.

After his 2013 retirement, Gómez and his wife traveled more, and he deepened his study of Spanish Medieval history. But he continued giving pastoral care. For example, Gómez maintained an e-mail ministry, gathering and sharing health updates on the scattered Rio Grande Conference pastors and their spouses.

“He was a very important connector for that community,” said the Rev. Paul Barton, pastor of Casa Emanu-El United Methodist Church in Dallas, and author of the book “Hispanic Methodists, Presbyterians, and Baptists in Texas.”

Gómez kept his email ministry going until his last weeks. He ended messages this way: