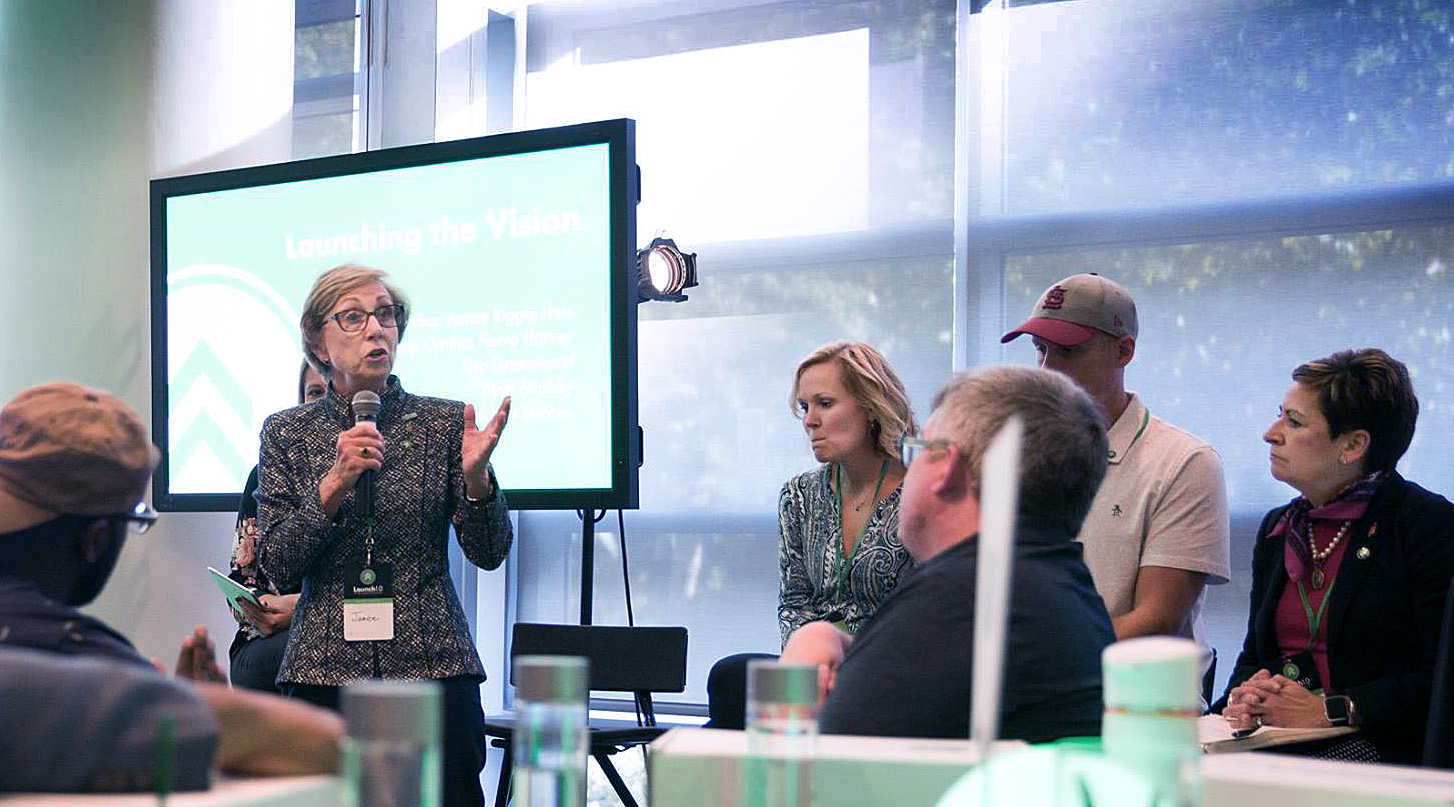 Tom Locke, longtime president of the Texas Methodist Foundation, is a soft-spoken, bespectacled man. He might also be called Socratic, so well-known is he for asking questions.

One question he has posed often and urgently about his organization goes like this:

“We’ve been growing in assets pretty rapidly. What happens if some day we come in and understand we have $1 billion in assets under management, but also discover we’re serving a lesser church? Did we win?”

At Locke’s insistence, the Austin-based Texas Methodist Foundation has transformed itself over the last 20 years to try to make sure The United Methodist Church is not “lesser,” at least in mission. That’s meant exerting influence beyond Texas and stretching the definition of a denominational foundation.

Leaders around The United Methodist Church have applauded, crediting Locke in particular.

“He is a forward-thinking visionary constantly looking for ways to expand the reach and impact of his foundation,” said Barbara Boigegrain, top executive of Wespath Benefits and Investments, the denomination’s pensions board.

While still growing as a provider of church loans and an investment manager for United Methodist institutions and individuals, the foundation has stepped up ministry grants, invested heavily in church leadership development and convened high-level meetings of bishops and others for discussion of how the denomination needs to change.

Some say the foundation’s greatest contribution has been to inspire other United Methodist foundations, who all together manage about $4.2 billion in assets.

“I can see the difference in the two foundations we have in the Dakotas and Minnesota Conferences,” said Dakotas-Minnesota Area Bishop Bruce R. Ough, immediate past president of the Council of Bishops. “They know they’re not the same size as the Texas Methodist Foundation, they don’t have the same resources, but I see the shift in attitude. They’re saying, ʽWe’re not simply about managing money. We’re about coming alongside conferences and helping them implement their vision and mission.’” 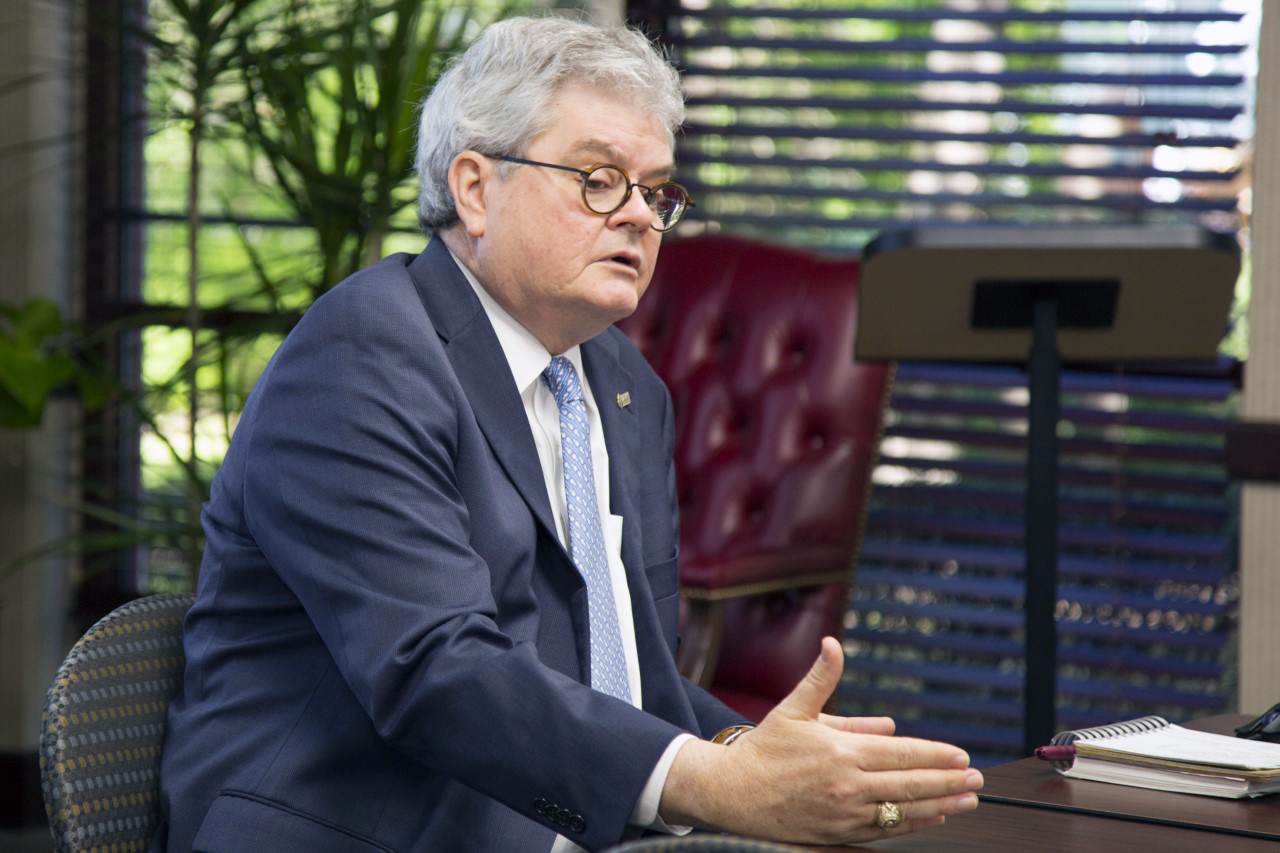 Founded in 1938 to help Texas Methodist churches struggling in the Great Depression, the foundation for decades operated as what Locke calls a “church bank” — making loans, managing investments and helping with church capital campaigns.

That continued after Locke, a cradle Methodist with a banking background, became chief financial officer in 1988 and president in 1993.

But a few years into his presidency, Locke found himself captivated and challenged by a speaker at a National Association of United Methodist Foundations meeting. Ken Eggeman, a hospital development executive, drew on Deepak Chopra’s book “The Seven Spiritual Laws of Success” in advocating that fundraising and fund-managing nonprofits should be as much about giving as receiving.

“That just struck me as being not only intellectually fascinating but entirely Christian,” Locke said.

Back home, he told his staff and board that the foundation needed to be a servant of the church.

“In retrospect, this notion of moving from being a financial service provider to a ministry that happened to offer financial services — defining yourself not by what you do but who you are — has made all the difference,” Locke said.

For starters, staff were asked to see themselves as advisors more than sales persons, helping churches to best practices in borrowing money and handling construction projects.

Locke still wanted TMF to handle the loan, but only if that was the best stewardship.

“There have been any number of times when a church has showed us what the local bank has offered, and we’ve said, ʽYou need to go with them,’” Locke said. 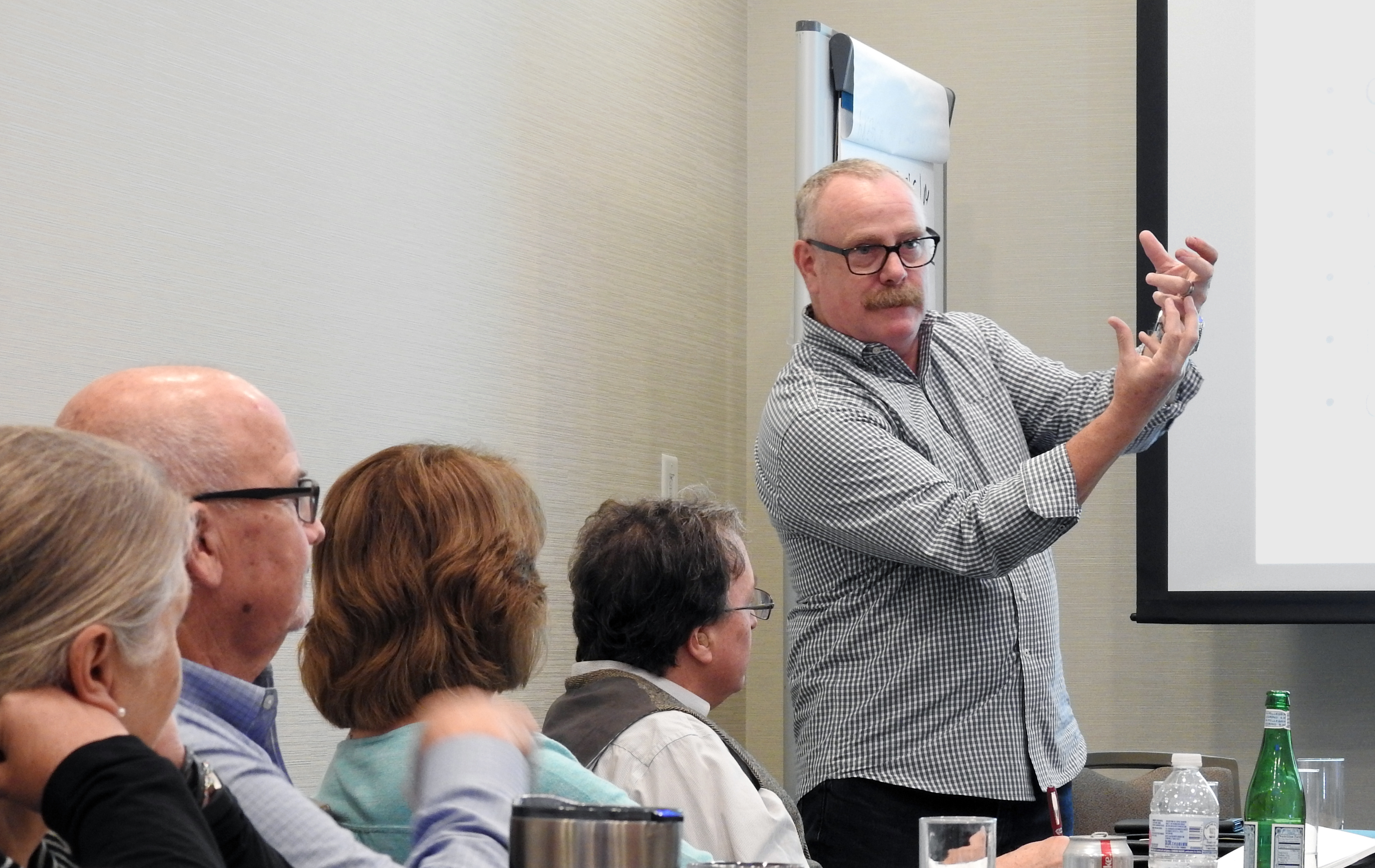 Chris Willard of Leadership Network shares insights with United Methodist executive pastors meeting in Dallas. This peer learning group is one of 16 sponsored by the Texas Methodist foundation, involving about 300 clergy and laity. Photo by Sam Hodges, UMNS.

By the early 2000s, TMF was offering leadership training for clergy and laity. The foundation’s leadership ministry is now a $1 million-a-year division, supported in part by a $7.7 million endowment, separate from the foundation’s $40 million unrestricted endowment.

The foundation sponsors 16 ongoing peer-learning groups, involving about 300 clergy and laity from across the denomination’s South Central Jurisdiction. Groups have included clergy in ministry to the poor, first-year district superintendents, entrepreneurial pastors and executive pastors committed to “deep change.”

Not long ago, the latter group convened at a Dallas airport hotel for discussions led by facilitator Mike Bonem, co-author of the influential book “Leading from the Second Chair,” and guest speaker Chris Willard, of Leadership Network.

The focus was church giving, and the group kicked around various topics, including whether pledge cards and stewardship Sundays made sense anymore.

Willard challenged the group to monitor giving data, and to check in on any member whose giving abruptly dropped. That person might have an unreported beef with the church or be going through hard times.

Sabra Engelbrecht had come all the way from The Gathering (United Methodist church) in St. Louis, where she’s executive director of ministries, to be part of the group. She didn’t mind the travel.

“This is the single most worthwhile thing I do in terms of learning,” she said.

More about the foundation

The foundation also has seven area representatives, led by the Rev. John Thornburg, who work with some 320 local churches. Sometimes the relationships yield loans and fees for strategic planning. But the representatives’ priority is to help the church imagine a better, more outward-focused future.

Locke wants the area representatives to press hard on the question of purpose, including when the church wants a loan.

“Sometimes we’ll get an answer like, ʽWell, the Baptists just got through building something,’” Locke said. “That’s where, if we’re clever enough, we can figure out some way to say, ʽWhat is it you believe God has in mind for you, other than aggravating the Baptists?’ Not that that’s a bad thing.”

The foundation’s outreach includes special projects, such as a new Courageous Leadership Imperative, underwritten by a grant from the Lilly Endowment Inc. That project launched with an October conference in St. Louis, bringing together clergy and laity from across the region.

Making ministry grants is nothing new for the foundation, but the focus now is on rewarding innovative ministries. TMF can be agile and innovative itself. It gave $100,000 each to the Texas and Rio Texas Conferences right after Hurricane Harvey, and postponed payments and dropped interest rates for affected churches with foundation loans.

In its convening role, the foundation — at the request of the Council of Bishops — gathered leaders of various United Methodist institutions for a Way Forward briefing. Twice a year, TMF sponsors a three-day conclave for active bishops of the South Central Jurisdiction.

The Rev. Gil Rendle has led those sessions for a dozen years.

“We get together and these bishops work on their own leadership,” he said. “That kind of leadership development doesn’t happen any other place I know of in The United Methodist Church or in other denominations.”

TMF’s influence owes in no small measure to Rendle, a former foundation vice president and senior consultant who in retirement still takes on assignments like the conclaves. Through talks, videos and books, he has been a one-man leadership think tank for the denomination.

Neil Alexander, former top executive of United Methodist Publishing House, said he’s heard from “scores of pastors, district superintendents and bishops who compared notes about Gil’s analysis and prescriptions, turning to him for counsel in navigating the churning waters of the day.”

A more recent star addition to the foundation is retired Bishop Janice Riggle Huie. She, with the Rev. Lisa Greenwood, leads the leadership ministry. 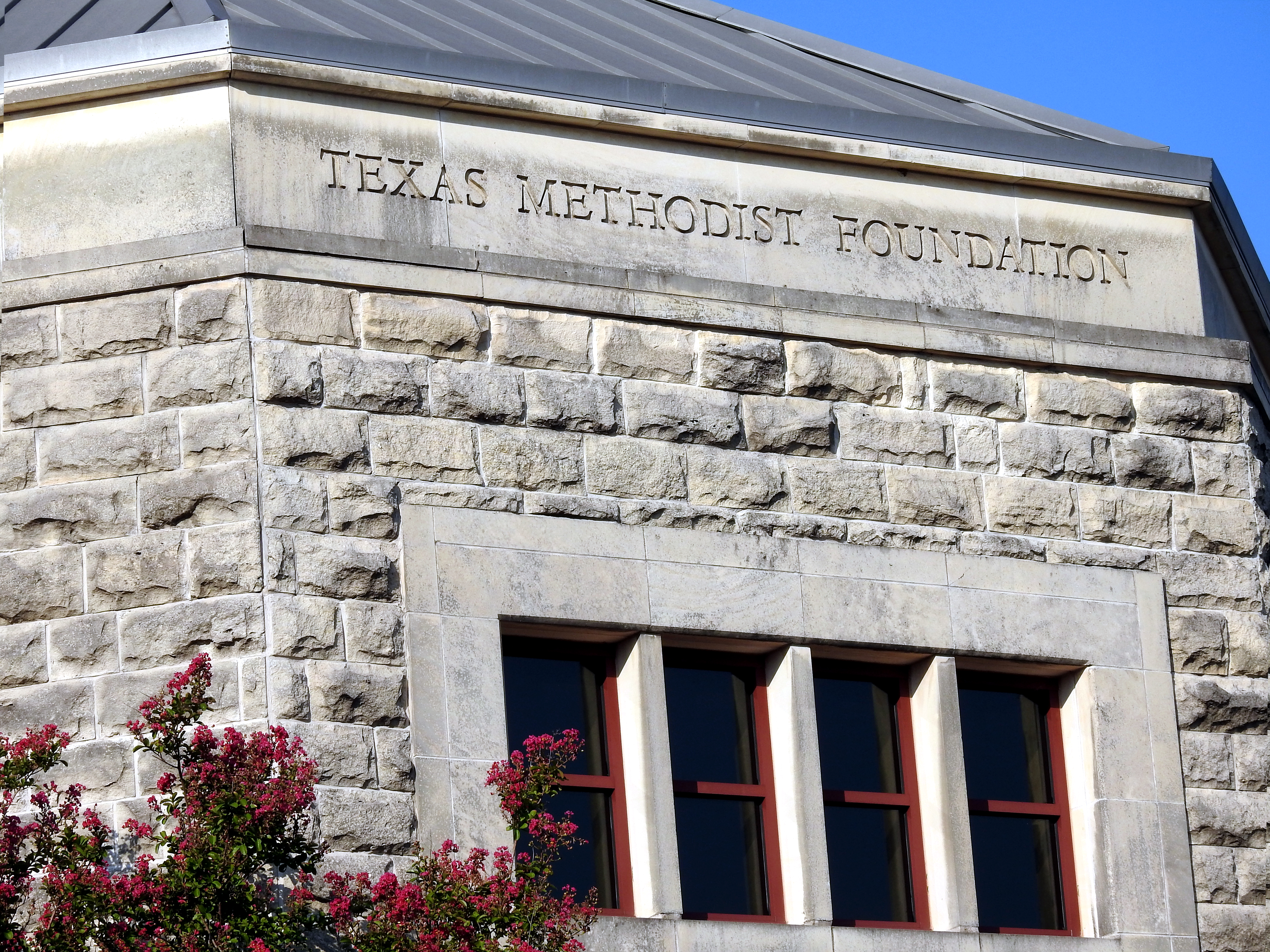 Huie describes TMF as an “edge organization,” meaning it has the flexibility and independence to help, sometimes prod, those in the thick of United Methodist struggles.

“I like working in an edge organization, and I don’t know of one that’s having a wider influence, in this time and place, than TMF,” Huie said.

The foundation’s evolution has coincided with, and been made possible by, its financial growth.

The merger takes effect Jan. 1, and on the same date TMF becomes controlling agent for the United Methodist Development Fund (UMDF). That fund, a national lending source for churches, has long operated under the Board of Global Ministries.

With Global Ministries’ move from New York to Atlanta, leaders decided UMDF wasn’t part of the agency’s core work and negotiated an agreement with TMF.

TMF already is managing the development fund. Come Jan. 1, the fund — with more than $100 million in assets — will essentially become a foundation subsidiary, retaining its name and a separate board, but staffed by the foundation and with Locke as president of both organizations.

Fund treasurer Roland Fernandes said he and colleagues were impressed by the foundation’s leadership ministry and see the potential for expanding it nationally with the development fund’s reach and resources.

“That was an incentive to try to make this happen,” he said.

On one wall of its headquarters, in billboard-size letters, TMF proclaims its main task as “empowering the Church in the achievement of her God-appointed missions.”

Locke is acutely aware that The United Methodist Church is declining numerically in the U.S. and faces the threat of schism over homosexuality. He draws on the foundation’s mission statement and experience in offering hope that a lesser future is not inevitable.

Hodges is a Dallas-based writer for United Methodist News Service, contact him at 615-742-5470 or [email protected]. To read more United Methodist news, subscribe to the free Daily or Weekly Digests.

Finance board moves ahead with budget cuts

Despite a request from some church leaders to reconsider, the denomination is still looking at sizable cuts to its 2021-2024 general church budget.
General Conference

Accrued benefits are safe. But whatever happens in 2019, Wespath wants exiting churches to pay their fair share of pension liabilities.
Mission and Ministry

The United Methodist Board of Global Ministries uses its fall meeting to remember history and renew commitments with Native peoples.